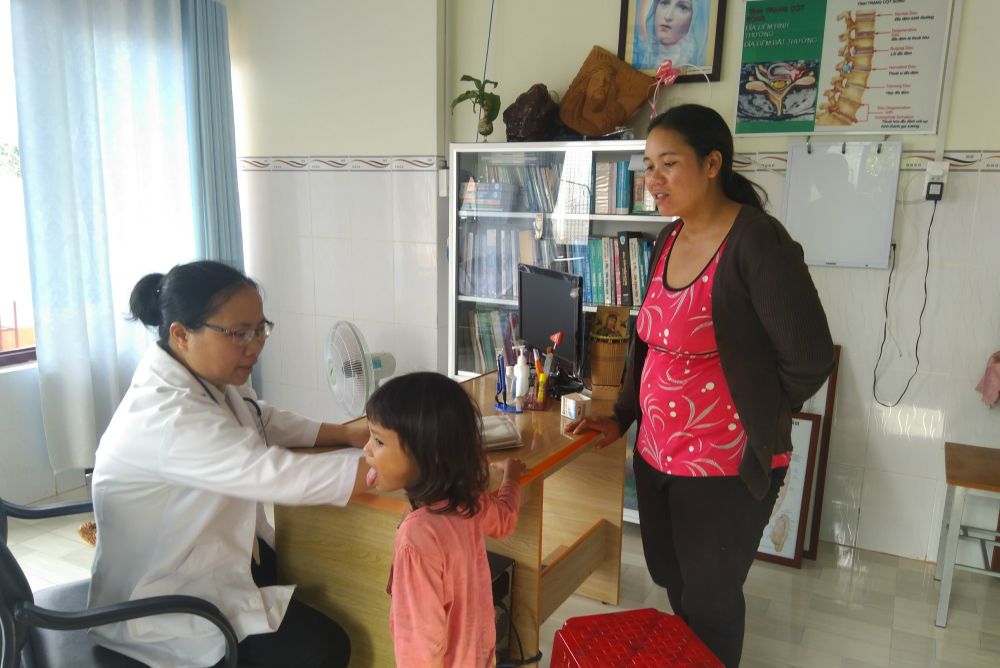 Sr. Mary Nguyen Ngoc Ha examines a child at the the Charity Clinic of My Linh in Gia Lai Province. (Joachim Pham)

Dinh Bim, a 3-year-old ethnic child, started to suffer a burning pain in her right ear in late June.

Her father, an ethnic Bahnar, found maggots in her ear and dripped gasoline on them to kill them, but her extreme pain persisted.

Her elder sister died at the age of 5 of an ear infection under the same conditions.

A Cistercian monk discovered Bim's illness on a visit to their village and called for help from local Dominican Sisters of St. Rose of Lima. She was immediately taken to the Charity Clinic of My Linh run by the nuns.

Sr. Mary Nguyen Ngoc Ha, a qualified doctor, said she removed a dozen maggots from the child's ear. Then Ha sent her to the public General Hospital of Gia Lai Province based in Pleiku City for further specialist treatment.

Ha said that after five days, Bim's parents secretly left the hospital, taking her home to the town of Ayun Pa in Gia Lai Province, as they missed their home and were not used to a strange and crowded place. 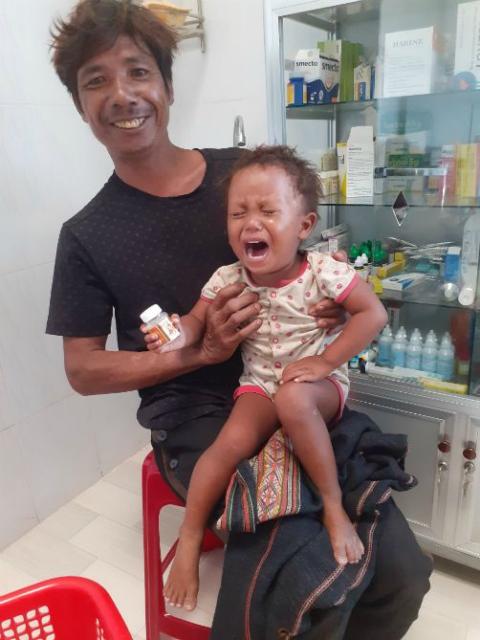 The sister said she brought them back to the clinic, and provided them with accommodations and food, so she could continue to give medical treatment to Bim.

"Now her ear infection improves. She is in good health and can play happily with other people at the clinic," Ha said. The patient's parents and two siblings had to return home for their work, leaving Bim at the clinic for further care.

"She still needs medical treatment and [good food] so that she can maintain physical health. We plan to send her to the Ear Nose Throat Hospital based in Saigon [Ho Chi Minh City] for further medical examinations on her ear," she said.

Ha said Bim's ear illness could be the result of contaminated water and poor personal hygiene.

Her family members live in extreme poverty, have no land to cultivate for their own food and no jobs. They can't afford to buy enough healthy food, and the whole family suffers from malnutrition.

Her parents struggle with alcoholism and are day laborers who pick up work on an irregular basis. They have five children, two of them having died from illnesses. The mother is from the ethnic Jarai group.

Ha said since Bim has received treatment and material support from the nuns, many other people know about her family's bad living conditions and provide food, clothes and other materials for them. Benefactors plan to repair their house in the coming months.

"It is good news that Bim's parents are interested in Catholicism and are starting to go to church. We hope they will embrace our faith soon," Ha said.

The nun said most local ethnic villagers work on farms for a living and have low incomes. They do not know what illnesses they get or how to prevent diseases. They have little access to health care since they have no money and speak little Vietnamese, the national language. 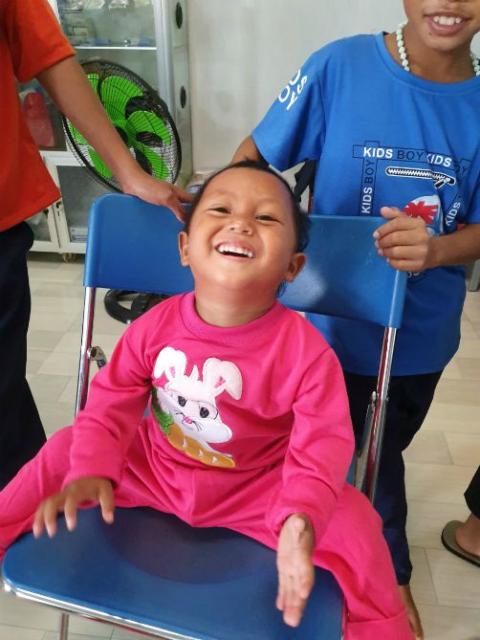 Dinh Bim engages cheerfully with other people at the clinic after her ear infection improves. (Courtesy of Sr. Mary Nguyen Ngoc Ha)

While Vietnam's Human Capital Index is at 0.67 — exceeding the upper-middle-income average — the indexes for local ethnic groups are consistently lower. Nearly 1 in 3 ethnic minority children are affected by stunting, due to malnutrition and other conditions from poverty, more than twice as much as the Kinh majority.

Mary H'len, a Jarai mother of three in Pleiku City, is an example. She cultivates vegetables on an area of 1,000 square meters and earns 50,000 dong ($2.16) per day on average. Her husband works irregularly as a day laborer.

H'len, 25, said two of her children stay at home because she could not afford to send them to a daycare center. They rarely have milk and nutritious meals.

She is six months' pregnant with her fourth child but has no money for a prenatal checkup.

Ha said the Charity Clinic of My Linh, named for her community, was established in 2017 in Chu Se District. It is staffed by two sisters and nine ethnic physicians. Its medical equipment was partly funded by the Conrad N. Hilton Fund for Sisters. (The Fund for Sisters was established by — but operates independently of — the Conrad N. Hilton Foundation, which funds Global Sisters Report.) 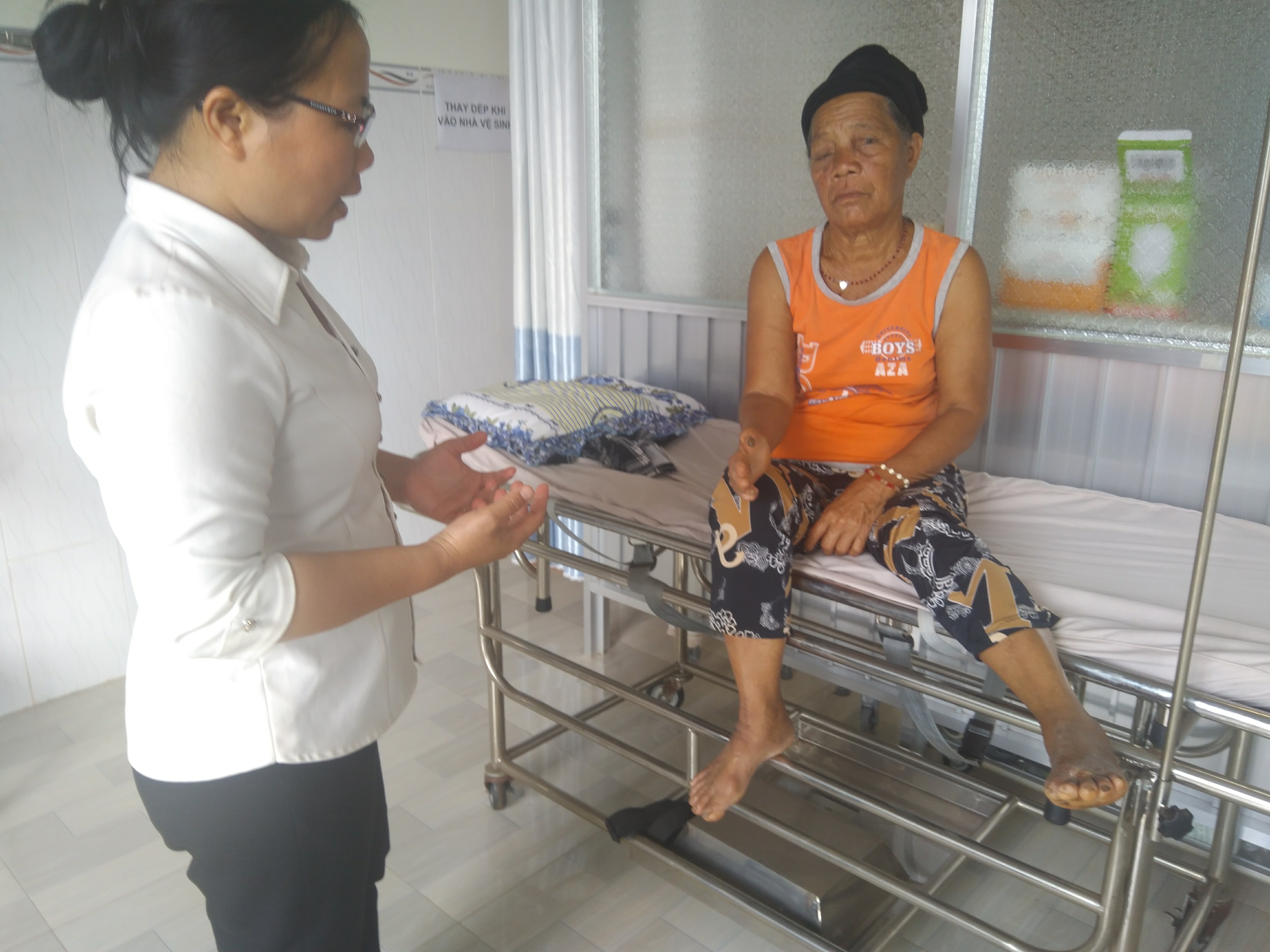 Sr. Mary Nguyen Ngoc Ha instructs a person with Hansen's disease, commonly known as leprosy, how to look after her wounds while she is healing. (Joachim Pham)

On weekday mornings, the clinic provides acupuncture, physical therapy, ultrasound scanning and medication for 50 patients, most of whom are from minority ethnic groups, she said. Many patients suffer from diseases related to malnutrition, poor hygiene and a polluted environment.

The head of the clinic said poor patients get services without charge while others pay only 5,000-10,000 dong (21-43 cents) each time. They are also given free breakfasts because they have to walk or travel by motorbike from their homes to the clinic without food.

Hlan Pep, an ethnic Jarai mother of four, said she has pain in her shoulders and neck and cannot afford to get hospital treatment.

"I daily come here and undergo physiotherapy for the shoulder and back. I am really pleased with the good results," said the patient, who could not speak Vietnamese, adding that physicians help her do exercises and treat her with respect.

Ha, who as a student wanted to be a doctor so she could treat poor people, said the staff also visit and offer health care to ethnic people with Hansen's disease in remote villages in the afternoon. They teach patients how to maintain good personal hygiene and care for their wounds.

Most of these patients suffer from malnutrition. Many have to work on farms and collect vegetables in forests, and others herd cattle for a living.

"As Catholics, we love our patients and try our best to help patients recover soon, and always appeal to God to heal them," Ha said.

Kontum Diocese covers the provinces of Gia Lai and Kontum, which have a total population of 2 million, half of them members of ethnic groups. 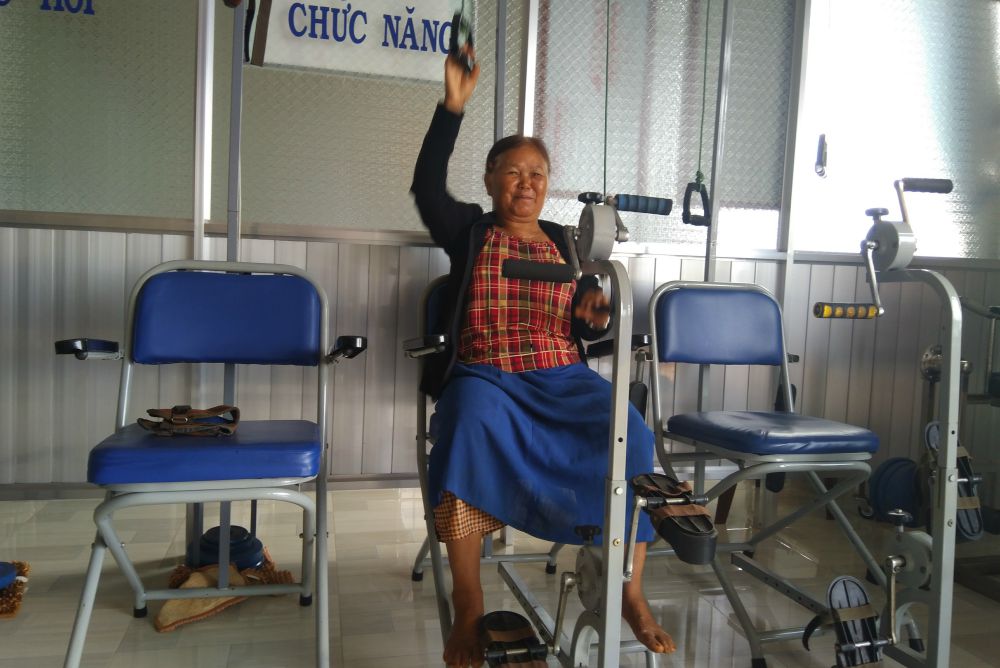 Hlan Pep, an ethnic Jarai patient, undergoes physiotherapy for her bone problems at the Charity Clinic of My Linh. (Joachim Pham)