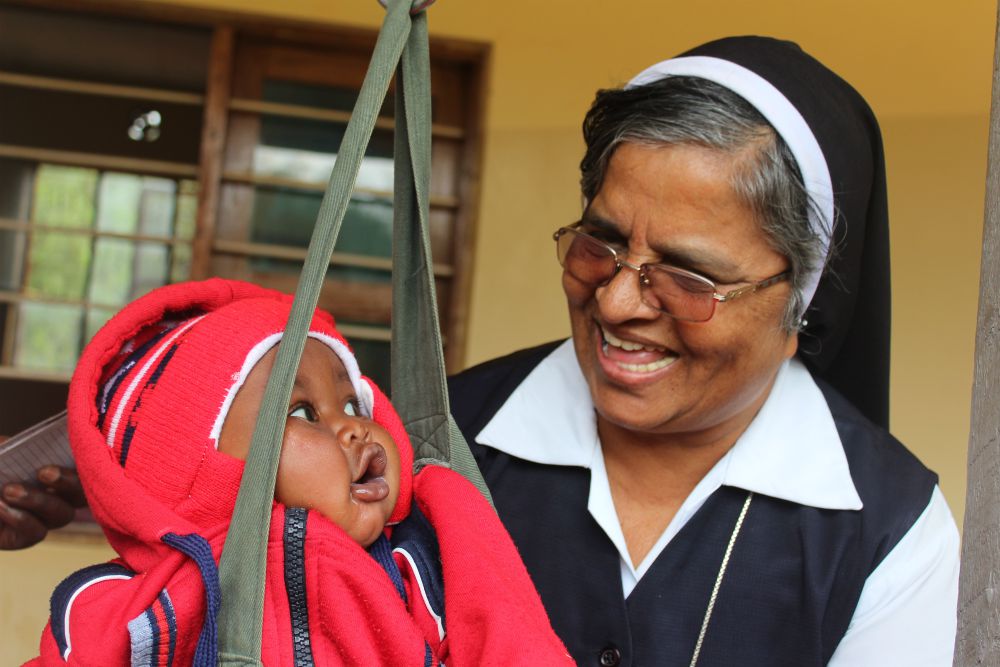 Sr. Rashmi Mattappally plays with a child while taking his weight at a local dispensary in Loiborsiret village in northern Tanzania. (GSR photo/Doreen Ajiambo)

In this remote, deeply traditional corner of northern Tanzania, Reginah Bennet stood outside her mud-walled hut and recalled the horrible ordeal she went through while giving birth to her fourth child with the aid of a traditional midwife versed only in folk medicine — a choice that nearly killed her.

"My first, second and third born, I went to a birth attendant. Everything went well," said the 30-year-old mother of four, amid sounds of bleating goats and crying babies in an area predominantly occupied by the Masai tribe. "My fourth born was a scare." She said she bled profusely after the midwife performed a rough, physical exam. "I felt my life draining out of me and I lost consciousness. I was certain I was going to die."

Bennet's placenta had peeled away from the wall of her uterus before delivery, decreasing the baby's supply of oxygen and nutrients and causing heavy bleeding. The midwife, who had no formal training, was battling to save her life and the baby's, she said.

However, she was rescued and taken to the hospital for safe childbirth by the Sisters of Notre Dame , who are fighting high maternal mortality in the region through improved quality of care.

"I nearly died when I was giving birth to this child," recalled Bennet, shifting her 9-month-old son from her back to her bosom. "The sisters really saved my life and my baby's life. I bled excessively and the sisters had to rush me to their hospital for safe delivery." 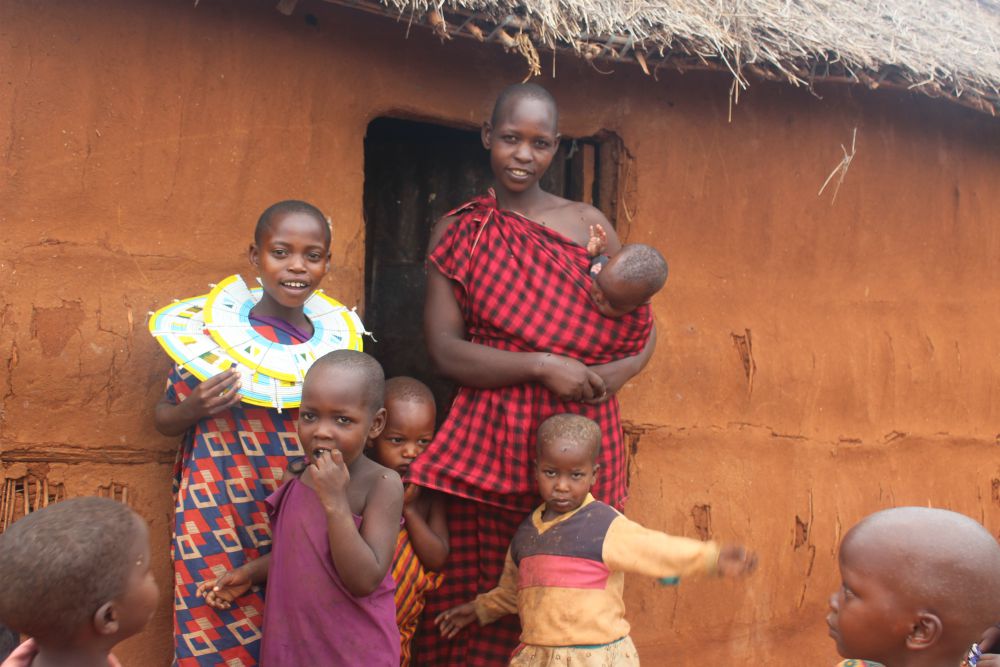 Reginah Bennet is surrounded by her children outside her mud-walled hut in Loiborsiret village in northern Tanzania. (GSR photo/Doreen Ajiambo) 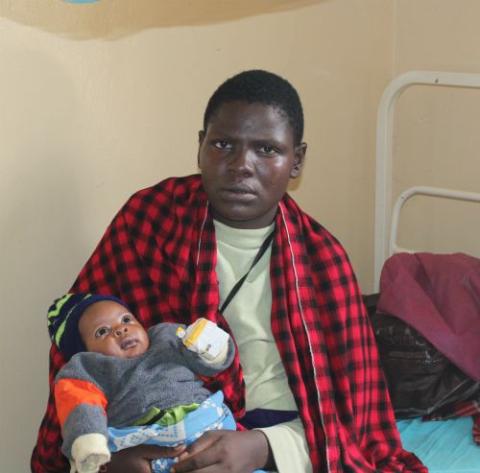 A Masai woman holds her baby after being examined by a nurse at a local dispensary in Loiborsiret village, northern Tanzania. (GSR photo/Doreen Ajiambo)

Bennet is one of many Masai women in this region who have been rescued by women religious in this way. Sisters with the support of the church have built several hospitals in the region in an effort to change the high incidence of maternal and infant mortality at childbirth in the Masai community.

Although significant efforts have been undertaken to reduce child mortality in the country, the neonatal mortality rate among newborns under 28 days old remains high, at 32 per 1,000 live births, according to a report by Tanzania's Ministry of Health and Social Welfare. That figure accounts for almost half of the infant mortality rate among babies up to 1 year old.

The maternal mortality rate (deaths due to complications from pregnancy or childbirth) in the East African nation has remained high over the last few years, reaching a 2017 level of 524 per 100,000 live births, according to an interagency group that includes the World Health Organization, UNICEF, World Bank Group and U.N. population researchers.

Tanzania is rated among the 20 countries with the highest maternal mortality rate, according to U.S. Central Intelligence Agency 2017 estimates. One woman dies every hour due to complications that arise during pregnancy and childbirth in Tanzania, where 2 million women give birth every year, according to World Health Organization, U.N. Population Fund and Tanzania health data.

Fewer than half of all births in Tanzania take place in a health care facility, with 46% being assisted by a skilled health care worker, which results in a higher maternal mortality ratio, says a report released in 2015 by Tanzania's Ministry of Health and Social Welfare.

Out of the 53% of home deliveries, 19% are assisted by traditional birth attendants, and 31% are performed by family members, the report says.

No survey has been done to determine accurate maternal and infant mortality rates in every village, said Sr. Anita Kyorimpa, a community nurse at Loiborsiret Health Centre, but the risk is apparent.

"Babies born at home under the direction of midwives are at high risk of dying," she said. "They [midwives] have no skills, and they force pregnant women to squat while pushing, which is dangerous for the infant in case it slips and hits the ground."

Nevertheless, in a bid to change the trend, Catholic nuns have built health clinics and launched sensitization campaigns in local churches and villages with the aim of reducing maternal deaths. The World Health Organization defines maternal death as loss of life from preventable causes while pregnant or within 42 days of termination of pregnancy.

Kyorimpa said they have set up manyattas , a village hut,vinside hospitals to encourage Masai pregnant mothers to feel comfortable in a clinical setting rather than risking their lives by delivering at home. 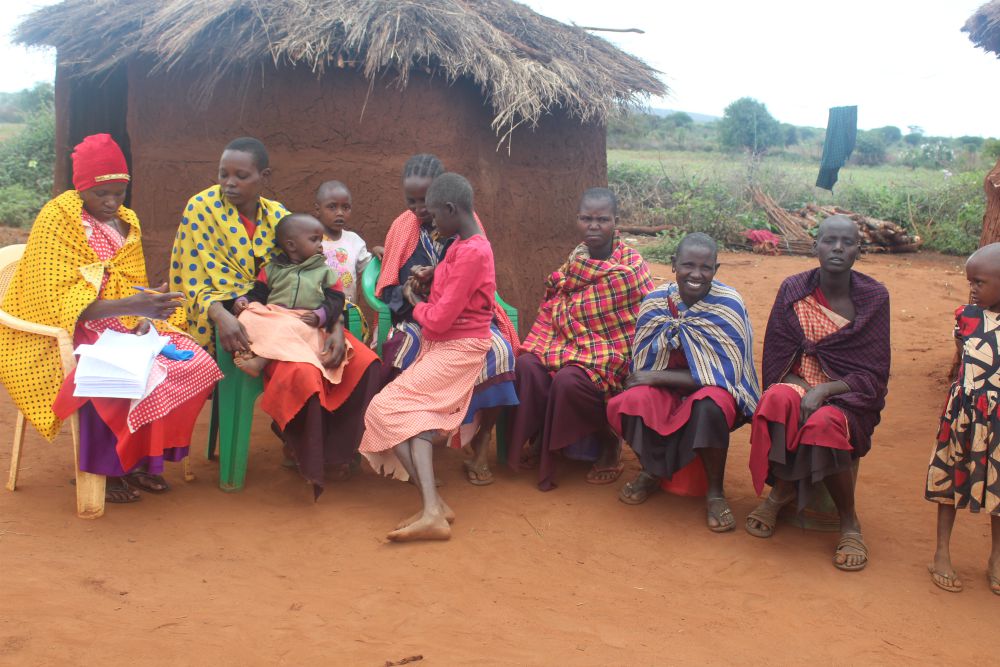 Mary Ngaon, at far left, once a village birth attendant, educates women in Loiborsiret village in northern Tanzania on the importance of delivering babies in the hospital and seeking maternal healthcare. (GSR photo/Doreen Ajiambo)

Sisters discourage village birth attendants from tending to expectant mothers because they lack the skills needed to offer safe deliveries. The sisters encourage pregnant women to deliver their babies in hospitals and even offer incentives to birth attendants to take the women to health facilities for prenatal care and childbirth assistance, she said.

"We try to educate [pregnant women] on the benefits of delivering in hospitals in case of emergencies such as obstructive birth," said Kyorimpa, a Sister of Notre Dame from Uganda who said they have been working in the region for the last decade. "We give them free antenatal care, ambulance services and vaccination."

The move comes amid growing interest in Africa and elsewhere to reduce maternal mortality and achieve the U.N. Sustainable Development Goal Number 3 that seeks to ensure health and wellbeing for all, at every stage of life. The goal addresses all major health priorities including maternal and child health. The new goal commits countries to reduce maternal deaths to fewer than 70 for every 100,000 live births by 2030. The global maternal mortality ratio stood at an estimated 216 deaths per 100,000 live births in 2015. 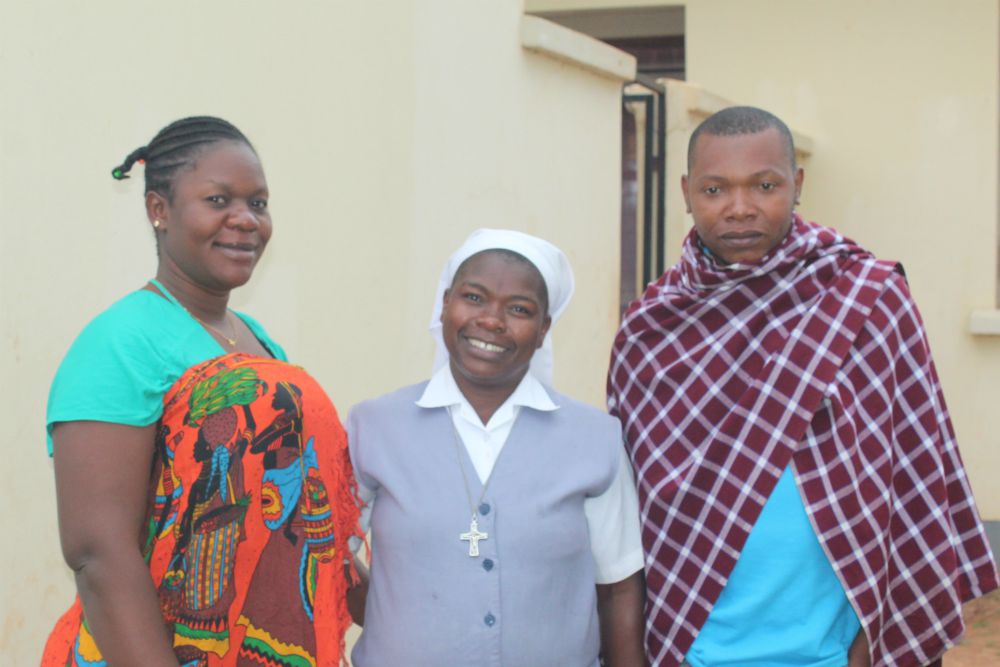 Sr. Anita Kyorimpa, center, seen with patients outside the hospital at Loiborsiret village in northern Tanzania, is encouraging Masai women to deliver their babies in hospitals to reduce maternal deaths. (GSR photo/Doreen Ajiambo) 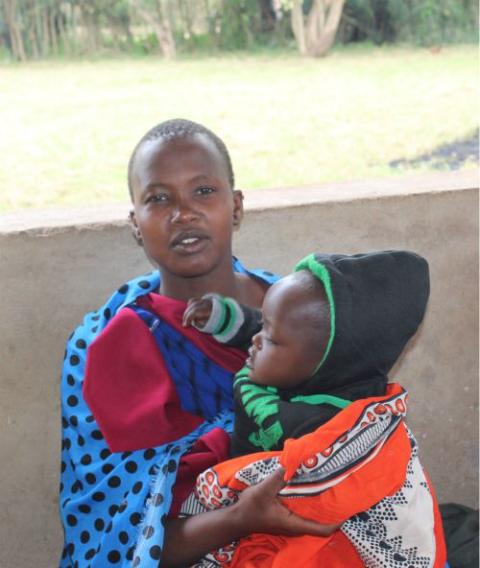 Fr. Micheal Shaji, who is a local priest at Loiborsiret Parish and administrator of the health center, said the sustainable development goals are ambitious but attainable if countries can deliberate about their priorities. The church is working in the Masai region to reduce neonatal mortality to 12 or fewer deaths per 1,000 live births and to reduce mortality for children under 5 to 25 or fewer deaths per 1,000 live births, he said.

"We are helping and encouraging pregnant women to deliver their babies in hospitals to reduce the rate of maternal mortality," said Shaji, who works with sisters to offer quality health services to expectant mothers and the entire community. "We also encourage them to bring their children to the clinic for vaccines and checkups every month."

Shaji said the most common causes of maternal death in the region are hypertension and hemorrhage. But obstructed labor and unsafe abortions also contribute, he said.

Mary Ngaon, 55, a former traditional birth attendant who now works with sisters to ensure women in her village deliver their babies in hospitals, said it was risky to give birth at home with only a "traditional birth attendant" — a person who assists the mother during childbirth and initially acquired her skills by delivering babies herself, according to a definition by WHO.

Ngaon said she couldn't deal with the complications arising in some of the home deliveries. She is now helping sisters to distribute information in the villages about the benefits of giving birth in the maternity ward.

"The sisters helped me with information, and I was able to deliver my remaining babies in hospitals," she said, sitting on a makeshift stool. "Every pregnant woman should deliver in the hospital to avoid risks that arise from complications during childbirth. I used to help with home deliveries, but now I tell pregnant women to go to hospital for safe delivery."

Masai women, who have been able to attend prenatal clinics, deliver their babies in hospitals and attend postnatal clinics, have praised the sisters for saving women from losing a child during complications arising from childbirth.

"I felt very happy and comfortable when I delivered in hospital," said Juliana Moringe, 33, a mother of five. "My baby is now very healthy, and I would still go back to hospital in case I get pregnant again." 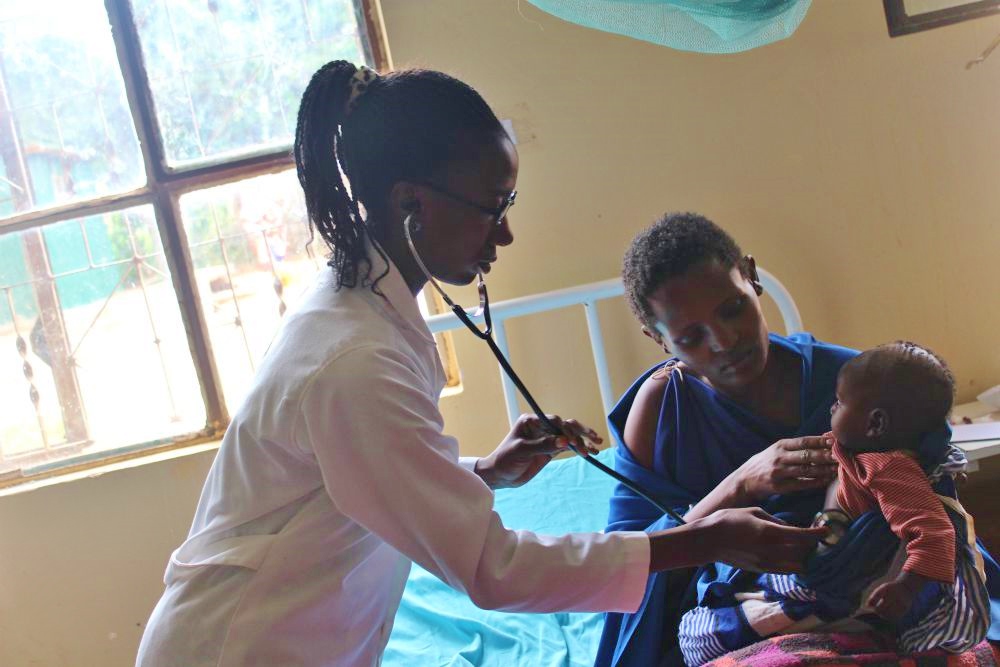 Sr. Rashmi Mattappally said the number of Masai women now giving birth at the health centers has increased to an average of 25 every month, which is a remarkable improvement compared with the three births a month experienced when the sisters came to the region a decade ago.

She said they have built maternity waiting homes in various health centers to accommodate pregnant women in the last days of their pregnancy so they can give birth with trained nurses.

"I once helped a woman to deliver a baby along the road, and it felt quite fulfilling to bring forth a child and I thanked God for the opportunity," said Mattappally, who is originally from Kerala state in India. "Maternal deaths have really reduced, and more mothers continue to seek services in our facilities."

In the meantime, Bennet, who escaped death by a whisker while delivering her fourth baby at her home with the help of a traditional birth attendant, urged Masai women to deliver at hospitals under the guidance of trained nurses.

"Doctors say it's a miracle I'm still alive," said Bennet, remembering the pain she went through during childbirth. "I want to thank the sisters for saving my life, and I want to encourage women to attend antenatal clinics and deliver their babies in hospitals."