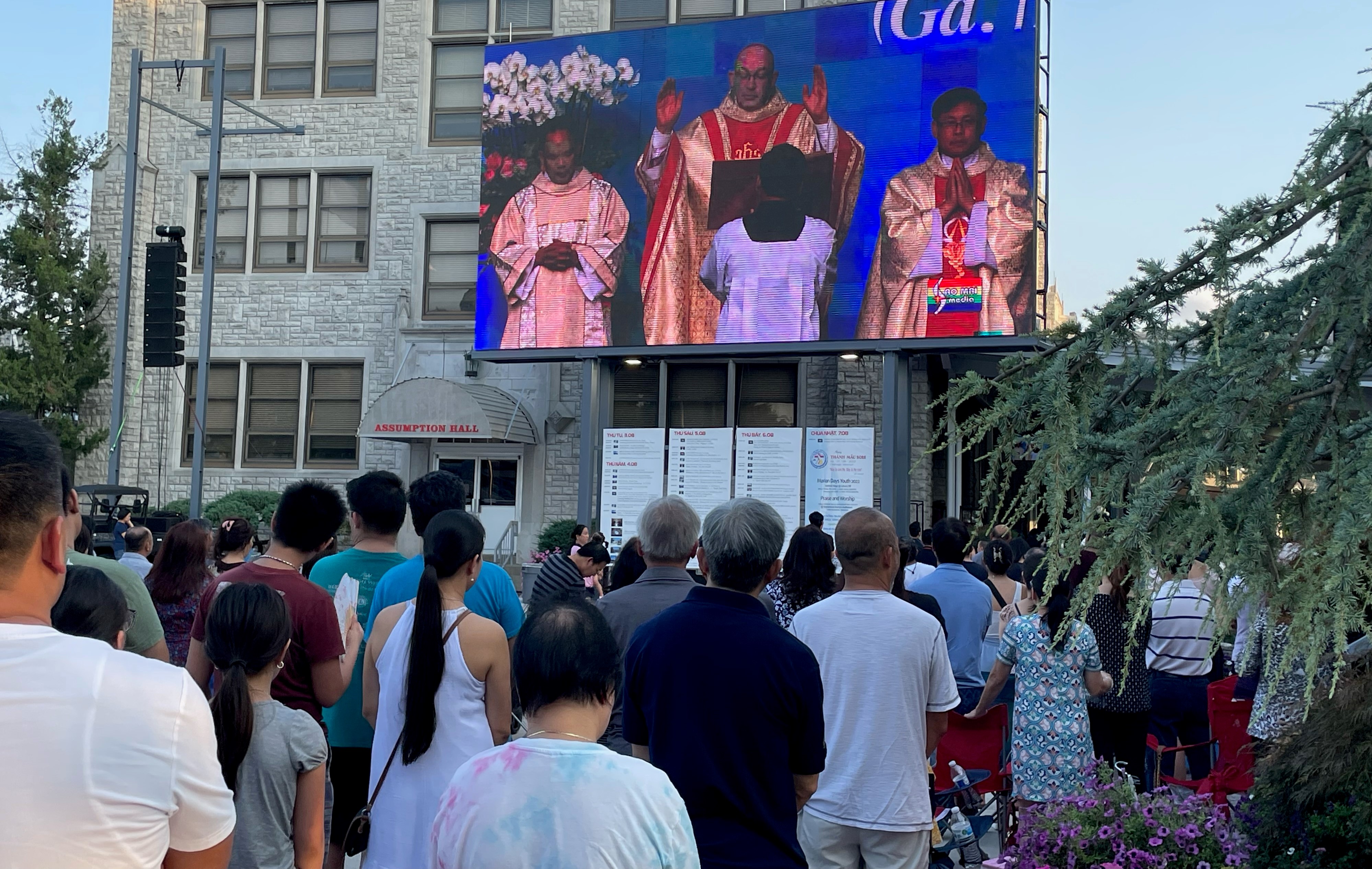 Marian Days participants watch Bishop Edward Rice of the Diocese of Springfield-Cape Girardeau celebrate the opening Mass of the festival in Carthage, Missouri, Aug. 4. The events, organized by the Congregation of the Mother of the Redeemer, a men's religious order from Vietnam that settled in Missouri in the 1970s, began in 1978. (Peter Tran)

CARTHAGE, MO. — Pham Thi Sang was elated to return to the Marian Days celebration in this town in south central Missouri after its cancellation for two years due to the COVID-19 pandemic. The 91-year-old Sang from Houston said she has made this pilgrimage more than 20 times. "When I am here I ask God for the wisdom to learn to live my faith and to love him."

Sang said she made a prayer of thanksgiving to God and to the Blessed Mother for the many blessings in her life after her husband died at age 34, leaving her with 10 children.

Not far from the main stage for the outdoor Mass, a group of Nghia Si (high schoolers) were walking, playing and laughing under the shade of maple trees. They are members of TNTT — Thieu Nhi Thanh The, or Vietnamese Eucharistic Youth Movement. Talking to Global Sisters Report, they said it was good to be back this year to "hang out," attend the witness rally, and participate in the praise and worship sessions. Although from all over the U.S., they could be identified with their "yellow scarf" as members of the same confraternity.

Fanning herself with a paper fan under the high 90-plus degree humidity, Sr. Ana Gonzales of the Dominican Sisters of Peace said, “This is my first time here at this gathering. It is such a religious and cultural enlightenment. Someone told me that this is the coolest thing as it is the closest experience you can ever have to being in Vietnam. Ones have to come down here to experience this — the prayerful atmosphere, the food, the devotion to the Blessed Mother." 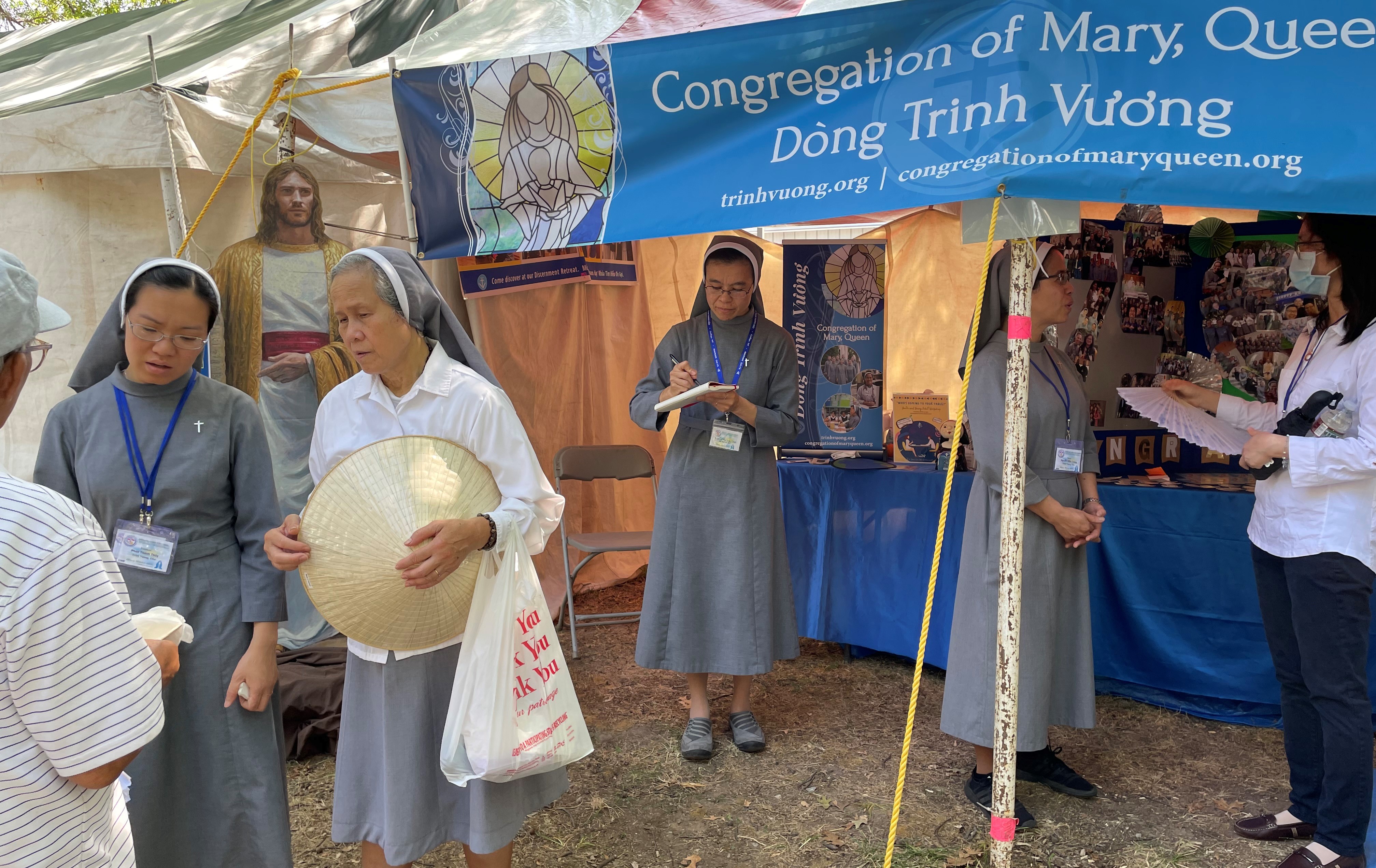 Several women religious congregations set up booths at the Marian Days festival in Carthage, Missouri. This is the booth of the Congregation of Mary Queen. (Peter Tran)

Vietnamese sisters from various congregations, such as the Lovers of the Holy Cross of Los Angeles, Congregation of Mary Queen and Daughters of Our Lady of the Holy Rosary made their presence felt talking with young people and adults. Sr. Janine Van Tran of the Congregation of the Mary Queen, a workshop speaker for teens and young adults said that vocation work is challenging, but being present with young people is very important.

The Congregation of the Mother of the Redeemer, a men's religious order from Vietnam that settled in Missouri in the 1970s, organized the festival every year except in 2020 and 2021 because of the pandemic. At the opening ceremony Mass on Aug. 4, Fr. Paul Tuan Tran, the order's provincial, began, "Welcome back! Did you miss us? Did you miss us?" The crowd roared back, saying, "Yes." Tran added, "We missed you, too. We are happy to welcome you back to the 43rd Marian Days celebration.” He then invited Bishop Edward M. Rice of the Diocese of Springfield-Cape Girardeau to officially open the event.

Fr. Timothy Thang Tran, another member of the order, said that the event started in 1978, a few years after the 1975 fall of Saigon. Initially, the congregation wanted to organize this pilgrimage for evangelization. They expected only a few hundred people, but they were "pleasantly" surprised to see that more than 1,500 Vietnamese showed up. "We organized this as a religious event as a way to reach out to people to spread the Good News. After that it grew to something more."

Before the pandemic, attendees numbered more than 70,000 in most years. This year the festival drew at least 30,000, with attendance curtailed because of COVID fears and high prices for food and gas, he said, noting the program has no registration system.

"The Marian procession is the highlight," he said. "A lot of people still come because they want to be connected with their roots, their faith and their culture."

The congregation has more than 50 acres, he said, which filled up fast with large tents that parishes from around the country used for attendees, with other sections for shops and food booths. Thang, the public affairs official for the event, helps with logistics for the tents, food stalls, gift and religious arts and crafts shops, booths for religious congregations, venues for catechism or workshops for young people and adults, and confessional stalls. He is also a contact person with Carthage city officials and the police department. “The people of Carthage are very hospitable and understanding,” he said.

The Midwest location helps as "people come in from the East Coast and the West Coast," he said. "It is a way for people to come together, and especially when they escaped in 1975. This is where they could reconnect with their families and friends after being scattered or resettled throughout the county. It has a family aspect to it. In the 1980s we began to see crowds in the tens of thousands.” He first came in 1991 while in high school.

Yen Tran from Brooklyn Park, Minnesota, said what drew her was gathering with family and friends to thank God and the Blessed Mother for her intercession. She believes that through Mary's intercession her husband recovered from his recent heart surgery.

Nguyen Duc Hien and his wife, Quy, said this was their first time at the event, although he'd heard about it for many years. They drove more than 20 hours from Allentown, Pennsylvania.

"I was a fallen-away Catholic for all my life. I grew up as Catholic, then went into the Navy, left the country to come here after the war and started a new life," he said. "I was busy with work and had no time for my faith." Hien, 69, said it is not too late to find a way to rekindle his faith life. "This pilgrimage is a first step to nurture my faith."