My journey in the 'essence of religious life' Africa project

Participants at the symposium on Religious Life for Women in East and Central Africa: A Sustainable Future" at the University of Notre Dame's London center in 2019 (Anthony Kelly)

The five sisters who participated came from a variety of ethnic and academic backgrounds — counseling psychology, education, religious studies and communication:

The three-year research project included the countries of Kenya, Malawi, Tanzania, Uganda and Zambia. We had hoped to include sisters from the other countries of the Association of Consecrated Women in Eastern and Central Africa, like Sudan, South Sudan, Eritrea and Ethiopia, but it was too difficult for sisters to travel to meetings and gather in those countries.

Our goal for the project was to explore how — through their charisms and spiritualities — sisters experience and articulate their own understanding of religious life, and how they see the impact of their ministries.

A team of sisters from these five countries, representing the five national associations, had come to a consultation in Kasisi, Zambia, in 2016. They were joined by some congregational leaders or sisters involved in formation work. This team developed a single question to ask the participants in the study.

In that stage of the project, 56 discussion groups were held across the five countries, and other questions were also discussed: How well were sisters able to articulate and integrate their specific approach to prayer into their apostolic life and activities? How well were they able to express their charisms, and explain how their charisms inform their daily life of community, prayer and ministry?

These discussions were recorded, transcribed and analyzed by the team according to the themes identified in the discussions.

From the consultations, we concluded that sisters have a strong commitment to prayer, spirituality, the missions of their congregation, and community life, as central to religious life.

We shared the final analysis with participants in each of the five countries. In 2019, we also presented it at two international symposia of congregational leaders (both women and men) and for other religious and academicians at the International Union of Superiors General (UISG) headquarters in Rome and at the University of Notre Dame's London center. 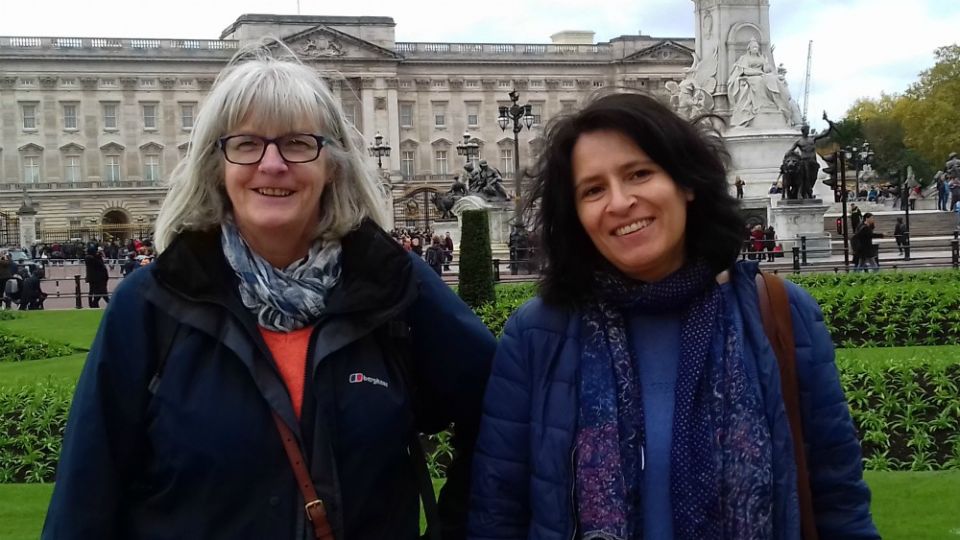 Speakers at the symposia included Sexton and Calderón Muñoz, as well as Loreto Sr. Marren Rose Awiti; Janet Soskice of Jesus College, Cambridge; and us, the five sisters who worked on the project.

Before the London symposium, the five of us were invited to participate in educational sessions at Margaret Beaufort Institute of Theology in Cambridge and at the Centre for Catholic Studies at the University of Durham in the U.K. It was exciting to hear Susan O'Brien speak on the history of apostolic religious life for women; Congregation of Jesus Sr. Gemma Simmonds on apostolate, prayer and charism; Anna Abram on ecclesial ethics; Karen Kilby on the theology of love and suffering; Greg Ryan on ecclesiology and communion; and Sexton on ministry and aging in religious life.

As they helped us reflect deeply on the essence of religious life and how to sustain it, I experienced how deeply committed the laity are to the church, how they value what the sisters are doing in the church and the world, and how they treasure the future of Catholic religious life.

I was also surprised to see how our sisters in the U.K. are working with Anglican sisters. It was my first time to see Anglican sisters in habits and veils and to hear them sharing the common concerns affecting Catholic sisters. These sisters have vows, live in communities and promote vocations as Catholic religious sisters do. They have participated in the research about new vocations and entrants to religious life in the U.K. since 2000.

During the live panel discussion, Soskice asked us a number of questions; from the responses we gave, the audience seemed to feel encouraged, awakened, consoled and motivated. We praised the participants (mostly Catholic sisters from around the U.K.) for their courage in freely sharing their experiences to sustain apostolic religious life.

We realized that the issues covered — such as challenges faced by candidates in initial stages of religious life and the gap between the young and older generations — not only affect sisters in Africa but in other continents, too.

In group discussion, sisters were asked what they thought might help congregations and individuals find a way forward. The sisters responded by suggesting a stress on lifelong ongoing formation for all sisters, so that professed sisters, longer in religious life, can model how it should be lived.

My journey through this experience was an eye-opener, as it helped me to go deeper into the essence of religious life and consider new ways to be of service in today's world. Each stage was exciting for me, starting with the recruitment process, but the most exciting was during stage two when participants in each congregation came together to brainstorm on the responses from stage one.

Actually, this was my favorite, because I got to go to many dioceses, learn about different congregations, and interact with a number of major superiors. Also, I liked the way sisters were courageous and open in talking about issues.

I pray that this project will not end here, because most of the sisters' conferences really appreciated it and would like to see the way forward. During the conference, there was a strong feeling of "The research has been done and so what next?" Project support assistants in the five countries are already thinking of how to sustain the project and make religious life more attractive.

[Sr. Helen Kasaka belongs to the Bemba tribe of the Northern Province, Zambia, and is a member of the Congregation of the Little Servants of Mary Immaculate. Currently, she serves as congregational communications officer, provincial secretary of the congregation in Africa, and part-time producer for Loyola Catholic Television.]