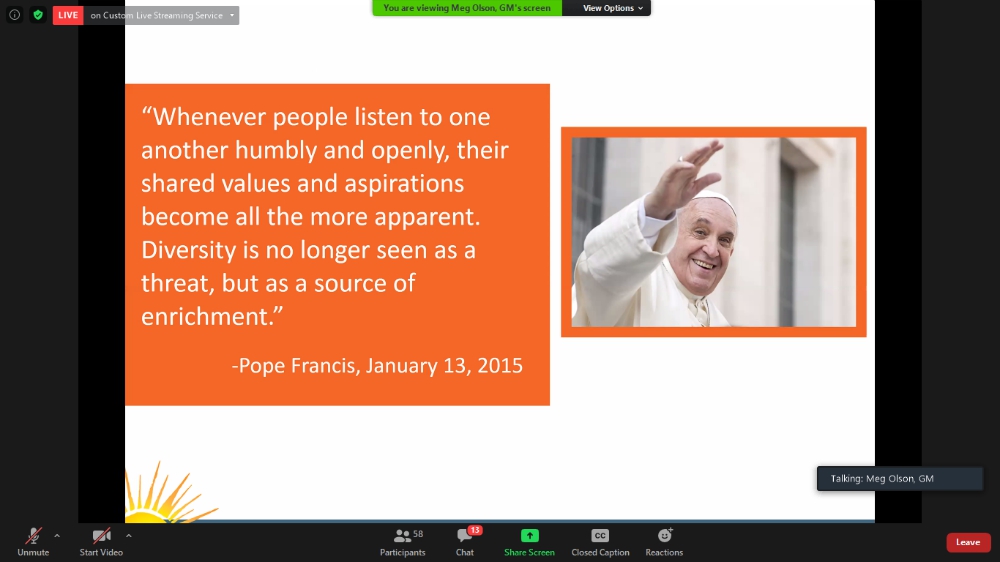 Pope Francis’ call for bridge-builders was at the heart of the Network webinar titled "Transformative Conversations to Bridge Divides," held Aug. 25. (GSR screenshot)

As she signed up for a webinar about how to have a productive conversation despite delicate disagreements, one attendee had her brother in mind.

She said sometimes it's hard for her to know if her brother is intentionally needling her, or if he means the disparaging remarks he casually makes about Black people. Either way, she said, the disconnect between his words and the way he treats his close Black friends has long confused her, as well as if or how she should confront his comments.

The Aug. 25 webinar by Network Lobby for Catholic Social Justice, titled "Transformative Conversations to Bridge Divides," equipped her with the skills to address that exact type of situation.

As part of Network's overall election strategy (which will include a virtual Nuns on the Bus tour), the series of webinars and live events that the organization will host this year address their members' desires to talk to their family and friends about the importance of being "spiritual," or multi-issue, voters, said Meg Olson, the lobby's grassroots mobilization manager.

That means being a citizen who is "voting to mend the gaps in our nation and is comfortable and equipped to talk to their friends and neighbors in a civil way, in a bridge-building way, about the importance of voting for the common good," she said. "And a lot of our members — especially our sisters, but some of our lay folks — are in these positions of needing a trusted messenger."

Although their experiences and ministries in social justice realms make them capable of being effective and knowledgeable messengers, for many, the desire to avoid conflict and polarizing rhetoric inhibits their confidence in communicating the connection between their faith and their politics, Olson said. 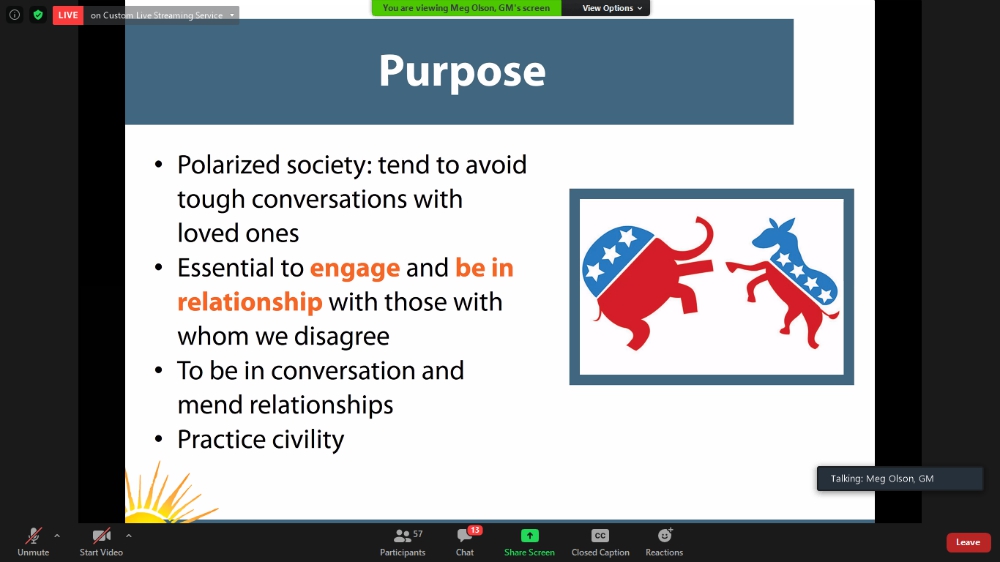 Skills and tips from the webinar were to help avoid polarizing rhetoric when discussing difficult topics with love ones. (GSR screenshot)

Inspired by Pope Francis and the church's teachings, the Equally Sacred Scorecard was created as a communication tool, followed by the webinars to equip members to become those "trusted messengers." The tools and skills are intended to help them engage with loved ones with whom they may disagree on issues and politics, all in the spirit of Francis' call to build bridges, not walls.

Of the roughly 60 participants who attended the webinar (most of whom were women religious), some talked about friendships that have allowed political differences to become unspoken tension, and either deliberately avoiding the subject or letting more and more time pass between contact. One shared how this strain with her mother has "eaten at me for years," as others offered similar impasses within their parishes or family gatherings.

One attendee said she finds herself "dreading" such difficult conversations, so it helps to remind herself why she wants to have them at all. Her goal, she said, should not be to change that person's mind, but to save the relationship.

To demonstrate the power that these uncomfortable and seemingly inconsequential conversations may offer, Gillette quoted the Rev. Jennifer Bailey, the founder and executive director of Faith Matters Network: "The most important requirement to change a worldview is an authentic respectful relationship. ... Relationships are built at the speed of trust, and social change happens at the speed of relationships."

"If I have a viewpoint that's different from another person, I shouldn't take that personally like I'm being abused or antagonized," Olson said to start off the first half of the session on "the purpose of transformative conversations."

"Listening with humility gets us beyond this feeling of being attacked."

Though Network works to "mend the gaps" in public policy — focusing on tax justice, living wages, health care and more — Olson said that "we also know that we need to mend the gap in our relationships in order to move that political agenda forward." 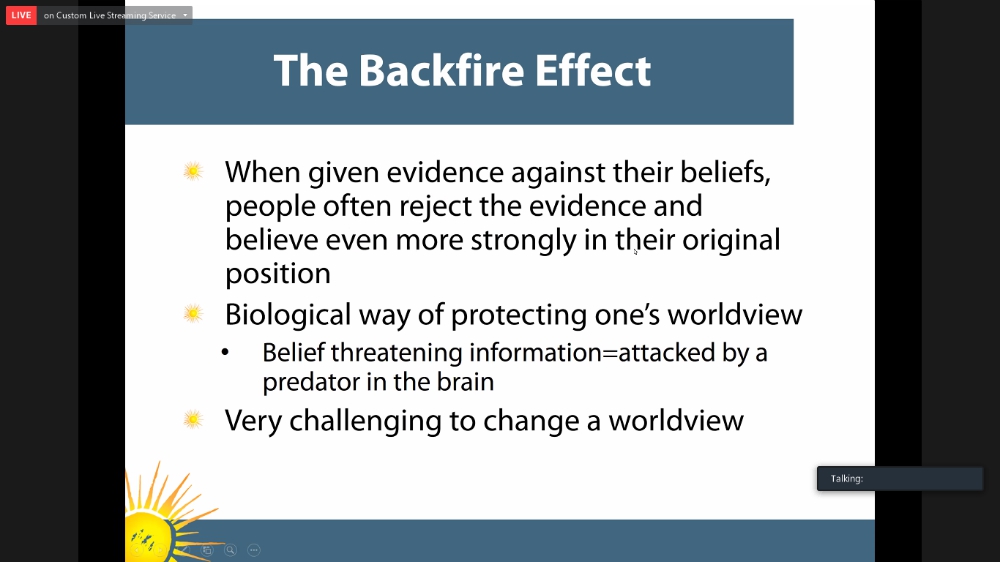 Culture, level of education, family dynamics, life experiences, belief systems and religions, and media all contribute to shaping one's worldview, she said. As some on the call shared the great influences of their lives (their religious communities, their time abroad, the social justice issues at the heart of their ministries), Olson reminded them that the opinions of those they're engaging with are, like their own, also backed by years of experiences and reinforced through a media ecosystem that exacerbates confirmation bias — a combination not easily undone when confronted with new facts.

Gillette said that the tendency of being averse to conflict is sometimes because it's simply too emotionally taxing, or a person lacks effective strategies on how to have challenging conversations that are still productive.

"It's not about engaging strangers on Facebook," she said. "It's more important to engage those you're in relationship with."

While the rapport behind the conversations has the "power to transform minds," she said, "it's important not to minimize the real forces that fuel polarization and conflict" — the sometimes literally life-and-death matters that are being discussed. Nor should one "erase" past injustices, particularly if one was not directly affected by them (white people discussing racial justice, for example). If one feels anxious for the conflict to go away, Gillette added, remember that there's a history behind the person's reasoning for feeling a certain way, and maybe they're justified.

But sometimes choosing not to engage is the right move, she said. "Bridgework is a calling, and it's not one that all are called to," with certain topics or situations begging different types of conversations, settings and participants. "Use your energy effectively."

Gillette used the "iceberg of conflict" to illustrate the approach when evaluating a disagreeable opinion: At the top is one's ultimate position, which is based on assumptions, with their aspirations as the foundation.

Gillette offered practical steps to take before engaging in a challenging dialogue:

One of the participants on the call shared that because she's been discouraged and frustrated anytime conversations arise about President Donald Trump, she finds herself withdrawing and avoiding the subject as best she can.

But she's come to understand that that attitude contradicts her beliefs to engage and be active in such issues, and that the advice regarding self-care was helpful in this regard. It's her responsibility, she said, to put herself in the necessary mindset to engage.

Other helpful steps throughout the conversation include the need to be curious, listen, review, validate and express, Gillette said.

To be curious, inquire openly what the other person thinks or believes with open-ended questions that avoid judgment. Seek to learn from the conversation and avoid shutting them down. 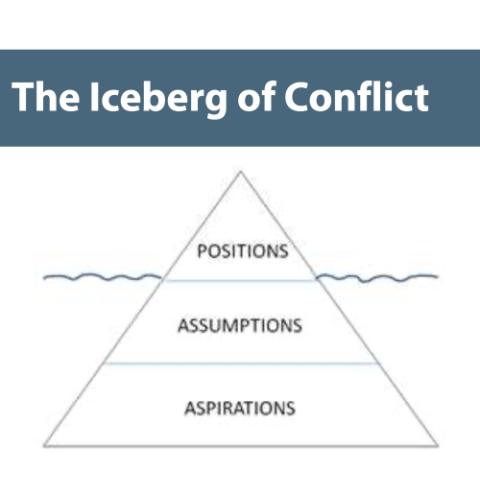 Approaching conversations with this pyramid in mind, it’s helpful to begin from the bottom up so that shared aspirations can be identified first, Network advised. (GSR screenshot)

To be a good listener, avoid interrupting, drop your assumptions, and show empathy for their worldview. Pay attention to body language, both theirs and yours, to appear welcoming rather than closed off, and practice active listening with affirmative comments so that they know you're engaged.

"I know when I'm listening, I'm sort of preparing a rebuttal in my mind, thinking about what I'm going to say next," Gillette said. "But we want to be focused on what they're actually saying and understanding it."

To review and validate, let them know you heard what they had to say and ask questions if you didn't understand their position. You don't have to agree with their position to affirm the validity of it, she said, but by showing an appreciation for their perspective and opening up, you're indicating trust and respect.

To express your own reasoning, feelings and assessment of an issue, a personal story or experience goes a long way. "It's much more difficult to disagree with someone's story or lived experience," Gillette said, "whereas you can find data for just about anything."

She recommended using "I" statements that share feelings and emotions, which can be more compelling.

She also brought up asymmetry in perception of political moves: It's easy to believe your own ideology is on the right side of history and is based in love, while theirs is that of the villain and based in hate.

"Operating from those assumptions, you'll never find common ground or move forward together," she said. "Your opponent's intentions may not be terrible, but they have a different way of going about it. Find shared values, shared ground ... and try not to impose bad intentions on them."

Divided into small groups of three, participants were encouraged to share the experiences and relationships that compelled them to learn these skills in conflict.

"It's important not to minimize the real forces that fuel polarization and conflict," said facilitator Catherine Gillette. (GSR screenshot)

Thinking of her brother who sometimes makes racist comments, one attendee said she wants to understand where he comes from when he makes those statements, using the tools from this webinar to figure out how she wants to approach him when he speaks like that. Before, she never seized the opportunity to understand what was going on underneath those comments.

As the larger group shared their reflections together, one participant said he recognizes that "the anticipation could be worse than the bite," as gearing up emotionally is sometimes more taxing than the actual conversation. (Gillette agreed, noting that the more practiced one becomes in having these conversations, the easier the anticipation becomes.)

Another attendee shared that she plans to use the advice someone offered in her small group: When quarreling with her mother over politics, she'll now ask, "Would you like to hear my view?"

Asking that question, she said, may keep her from arguing with all her mother's points and instead really listen; if her mother says yes, she'll in turn feel affirmed that the relationship is worth the uncomfortable conversation.

Wrapping up the workshop and reflections, one attendee said that, in a world where nobody talks to each other, she's become more attuned to the difference between what's shared in dialogue and what's merely spewed.

If even a few people learn how to engage meaningfully, she said, the interaction could have a positive effect on the whole planet, one that's currently entrenched in turmoil.

"That cannot be what God wants of us."

*Names have been omitted to respect the privacy of the conversations.