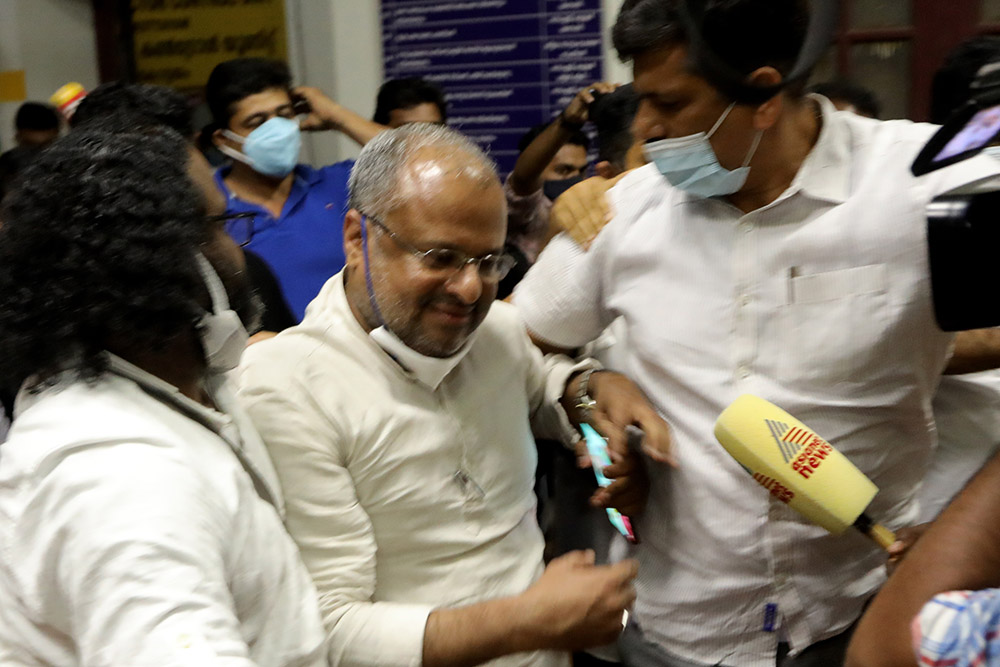 Bishop Franco Mulakkal, flanked by relatives, including, at right, his brother-in-law P.P. Chacko, goes to his car parked inside the compound of the Additional District and Sessions Court in Kottayam, Kerala, India, where he was acquitted on Jan. 14 of charges of raping a nun. (M.A. Salim)

The Jan. 14 acquittal of Bishop Franco Mulakkal in a rape case involving a Catholic sister has been challenged in an appellate court by both the accuser and the prosecution.

Mulakkal confirms that the government and the nun have appealed to the high court against his acquittal. "Yes. It is their right. We respect it," he told GSR.

Under Indian law, acquittals in criminal cases may be appealed.

The accuser filed the appeal March 28 in the Kerala High Court online, but it was not officially listed because of some defects in the filing. The nun's supporters told Global Sisters Report on March 30 that they will fix the problems and the case should be listed in a day or two.

Meanwhile, the home department of the Kerala state government on March 29 sanctioned the prosecution to appeal Mulakkal's acquittal.

The government move ended the speculation that the Communist-led government in Kerala was not serious about appealing the acquittal.

Related: Timeline in the first case of a Catholic bishop in India charged in the rape of a nun

Mulakkal was acquitted Jan. 14 by Additional District and Session Judge G. Gopakumar, saying the prosecution had failed to prove the charges against him.

A former superior general of the Missionaries of Jesus, a congregation that was under the patronage of Mulakkal, accused him of raping her 13 times from 2014 into 2016 during his stay in the congregation's convent at Kuravilangad in Kerala's Kottayam district.

The prosecution's appeal asserts that the nun was raped based on the evidence she provided and that was corroborated by witnesses and documents.

The prosecution had proved through documentary evidence the presence of Mulakkal in the convent on all days the alleged rapes and sexual assaults had taken place, the appeal states.

However, the appeal holds, the trial court did not recognize the full weight of the evidence with the correct perspective, misconstrued the facts and the law, and acquitted the bishop.

The appeal further says the trial judge had approached the prosecution's evidence with a predetermined mind to acquit the accused. In fact, every attempt had been made to discredit the sister in the case by wrongly considering the evidence, it adds.

The prosecution's appeal also questions the trial judge's conclusion that the accuser was unreliable. 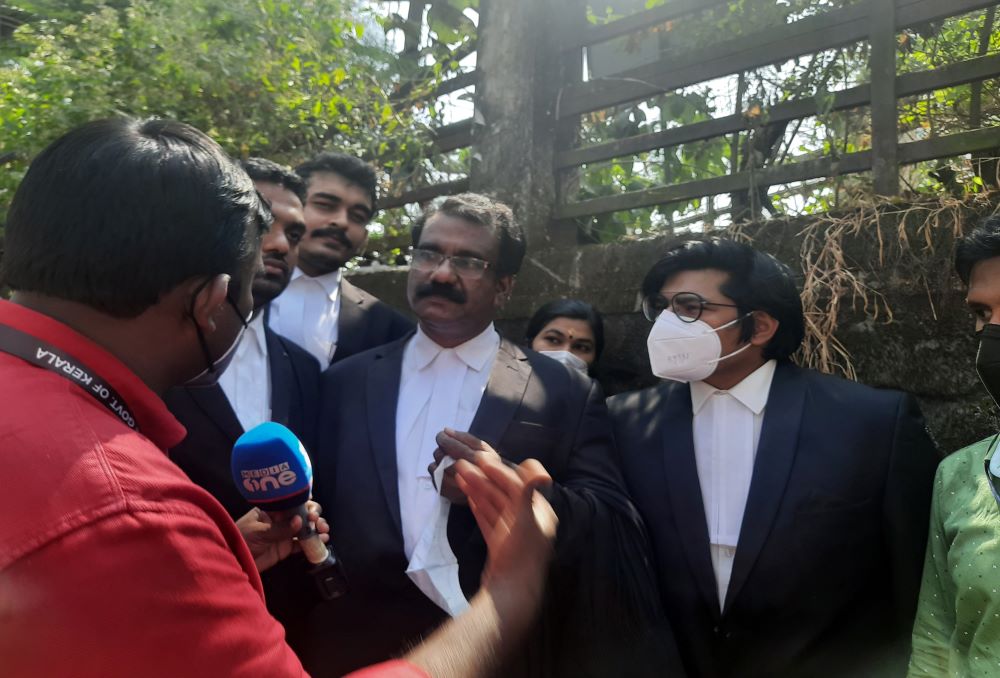 C. S. Ajay, center, a member of the legal defense team of Bishop Franco Mulakkal of Jalandhar, talks to reporters Jan. 14, 2022, about the acquittal of the prelate in the historic nun rape case by a trial court in Kottayam, Kerala. (Saji Thomas)

The nun's appeal primarily questions the way the trial court treated her evidence. "The trial court had not treated the evidences properly," leading to the accused bishop's acquittal, her petition says.

The trial court, she further says, "ignored serious evidences" and tried to find fault with her statements in a way that differed from Indian Supreme Court precedent in rape trials.

The trial court, she adds, had failed to note, among other things, her vulnerability as a nun living in a convent under a fiduciary relationship with the accused bishop.

She also argues that the trial court's order was defective and counter to established law and, therefore, should be set aside and result in appropriate punishment of the bishop for his crime.

"We have taken time to file the appeal to ensure that it should be watertight," said Fr. Augustine Vattoly, former convener of Save Our Sisters, a social forum that supports the accuser and her five supporters.

Although the mandatory appeal period was 60 days, "we got relaxation after India's Supreme Court permitted to calculate the appeal period from March 1 to April end in view of the COVID-19 restrictions," Vattoly told GSR. "This appeal relaxation was given to all, not specific to us," he said.

Varghese Parambil, a lawyer in the legal cell of Save Our Sisters, says they have a strong case now and "the survivor will get justice."

He also says the high court could take some time to start the hearing because the accused was acquitted, and procedures differ from those in which the defendant was convicted.

"The high court would analyze the available evidences on the record and pass the judgment after hearing both sides," Parambil told GSR. "In this case, I find more than enough evidences on record to convict the accused," he added.

Shaiju Antony, a supporter of the accuser and joint convener of Save Our Sisters, said they are happy that the appeal was finally filed.

Antony was also relieved that the Kerala government sanctioned the prosecution to file an appeal after much delay.

"We have been waiting for this order because our appeal would not have the required value without the prosecution's support. The prosecution support is quite important for our victory," he told GSR.

This is the first case in Indian Catholic Church history that a bishop was accused of raping a nun who had worked under his patronage.

Mulakkal's acquittal had shocked the survivor and her supporters.

Before the trial began, Mulakkal had approached the Kottayam court to dismiss the case, saying it had no merit. The court dismissed his request, saying there was a "prima facie" (based on first impression) case. The Kerala high court and the nation's Supreme Court in New Delhi rejected his appeals. 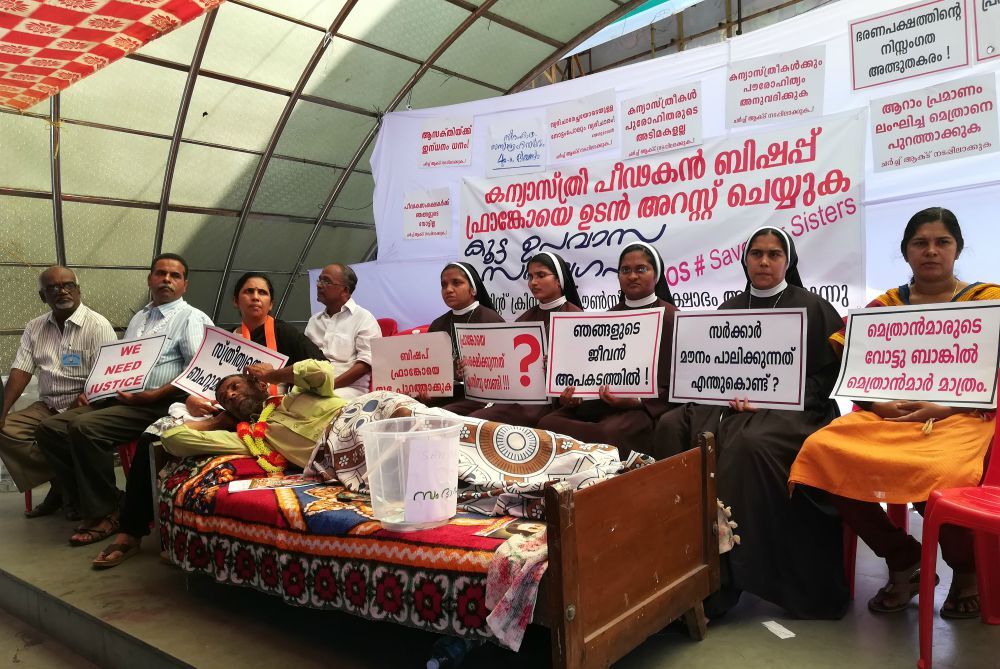 In this September 2018 file photo, Missionaries of Jesus and supporters stage a sit-in near the High Court of Kochi in the southwestern Indian state of Kerala, demanding the arrest of Bishop Franco Mulakkal of Jalandhar. (Saji Thomas)

After a police delay in acting on the complaint, the five nuns supporting the survivor joined civil society groups to launch a public protest Sept 8, 2018, near the Kerala High Court in Kochi. Save our Sisters was formed the following day.

The police completed the investigation and submitted its 2,000-page charge sheet April 9, 2019, before a magistrate court in the Kottayam district, and the case was transferred to the district court in Kottayam.

In September 2018, the Vatican accepted Mulakkal's request to free him from the diocesan administrative responsibilities and appointed an apostolic administrator in Jalandhar.

Mulakkal continues to hold the title of bishop of Jalandhar.