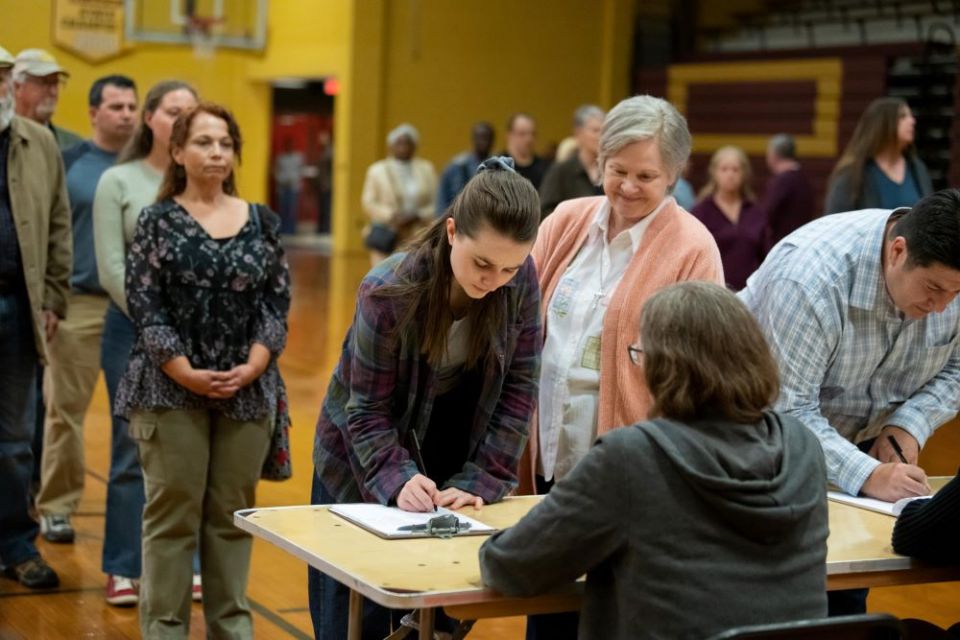 Hulu's series "Dopesick" examines how the Sackler family's Purdue Pharma triggered the worst drug epidemic in American history. Here Notre Dame of Montreal Sr. Beth Davies, played by Meagen Fay, accompanies Betsy Mallum (played by Kaitlyn Dever), who is fighting her addiction to OxyContin. (Hulu/Gene Page)
Editor's note: Global Sisters Report's Monday Starter is a weekly feature from GSR staff writers that rounds up news from or about women religious that you may otherwise have missed.

A sister in Appalachian Virginia has been getting the small-screen treatment as a prominent character on Hulu's new limited series "Dopesick," which depicts Beth Davies, a Notre Dame of Montreal sister who ministers to people battling opioid addiction.

The series is based on journalist Beth Macy's 2018 book, Dopesick, which explores the mighty corporate forces behind the ongoing opioid crisis that have long ravaged the nation, particularly throughout regions like Davies' coal country.

Davies has spent more than half her life in southwestern Virginia. As a recovering alcoholic, her experiences inspired her and the late Elizabeth Vines (a sister of Divine Providence) to launch the Pennington Gap-based Addiction Education Center in 1982, a rare resource of addiction treatment for locals.

Davies became certified as an alcohol and drug counselor. "It was the only way we could start something," she told Global Sisters Report in 2018, adding that despite her experience taking on coal companies and providing medical care, the opioid epidemic was unlike anything she'd ever witnessed.

Said Davies, now 88: "It got so bad that the funeral home director called me and said, 'Beth, when are we going to stop burying people?' "

In the series, actress Meagen Fay portrays Davies, introducing her to the audience in the seventh episode when Davies joins a therapy session.

Talitha Kum, the international network-of-networks that unites sisters in the fight against human trafficking, is commemorating the United Nations' International Day for the Elimination of Violence Against Women with a new call to action.

The organization invites participants to join the launch on Thursday, Nov. 25 at 9 a.m. EDT (3 p.m. Central European Time) for a two-hour livestream. The calls to action, according to the program, will entail justice for survivors, women's empowerment, legal migration pathways and economy of care.

Project to improve research opportunities for Catholic Sisters in Africa

A research initiative by the African Sisters Education Collaborative is putting its focus on Catholic Sisters in Africa.

The project aims to increase their scholarly research skills, offer opportunities so that the sisters can engage in research projects, and develop the ASEC as a "repository of data" regarding African women religious, according to a press release.

Through the Initiative, ASEC "strives to increase the academic literature available on Catholic women religious in Africa and develop sisters as critical investigators," the press release said. "Equipped with investigative skills, sisters will be capable of conducting rigorous research that will strengthen the capacity of their congregations and positively impact human development."

The research initiative witnessed noteworthy growth in 2021, specifically in the areas of academic publication and research-related webinars, with its focus on research related to the coronavirus pandemic and its impact in the 10 African countries where ASEC operates. 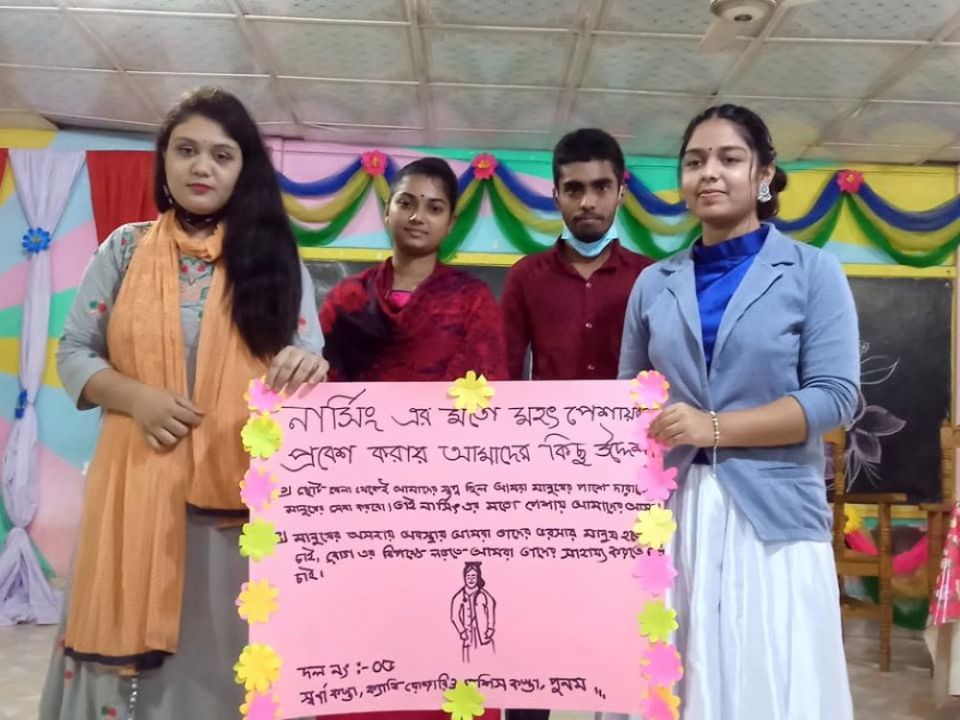 Students of St. Mary's Catholic Institute during orientation program in Tumilia Parish in Gazipur on Nov. 15 (Courtesy of Judith Rozario)

A nursing institute was inaugurated in Tumilia Parish in Gazipur, Bangladesh, on Nov. 15, with 28 students enrolled in the newly established St. Mary's Catholic Institute, run by Associates of Mary, Queen of Apostles, a local congregation. Students started classes on Nov. 20.

The congregation was established in 1933 by American Holy Cross Bishop Timothy John Crowly to serve those in need of education and health care. The sisters serve in hospitals, dispensaries and nursing institutes across the country.

"The aim of the nursing institute is to make skilled and dedicated nurses so that our learners also can serve patients like we do," Sr. Mary Dipa, principal of St. Mary's Catholic Nursing Institute told Global Sisters Report. They also run St. Mary's Catholic Mother & Child Care Hospital. "We will teach our nursing students to accompany patients, treat them with love and care. And nursing students will get jobs locally and abroad,” she added. The institute has 50 seats for students, and enrollment continues until Nov. 30.

In Bangladesh, Catholics are a minority of Christians, who make up less than 1% of the population in the Muslim majority country.

Freelance writer Sumon Corraya in Bangladesh contributed to this report.