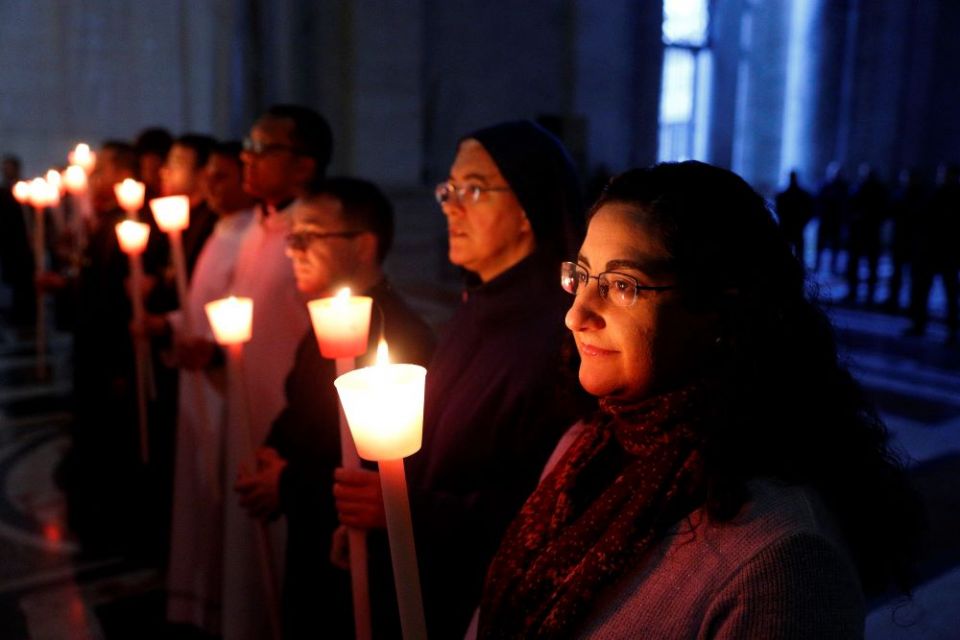 Religious hold candles as Pope Francis celebrates Mass on Feb. 2, 2017, to mark the feast of the Presentation of the Lord in St. Peter's Basilica at the Vatican. In a video message released by the pope's Worldwide Prayer Network on Feb. 1, Pope Francis offered his prayer intention for the month of February, which he dedicated to religious and consecrated women. (CNS/Paul Haring)
Editor's note: Global Sisters Report's Monday Starter is a weekly feature from GSR staff writers that rounds up news from or about women religious that you may otherwise have missed.

"I invite them to fight when, in some cases, they are treated unfairly, even within the church; when they serve so much that they are reduced to servitude — at times, by men of the church," Francis said in the video message. "Do not be discouraged. May you keep making God's goodness known through the apostolic works you do, but above all, through your witness of consecration."

The pope encouraged all women religious to discern and choose what is best for their missions and to "find new responses to the challenges of our times."

He also asked that sisters continue making an impact on the poor and marginalized, in particular, as well as those enslaved by traffickers.

This month includes the feast day of St. Josephine Bakhita, the patron saint of trafficking survivors, on Feb. 8, the International Day of Prayer and Awareness Against Human Trafficking. U.S. Catholic Sisters Against Human Trafficking encourages all to observe Bakhita's feast day by taking the time to think about survivors of this phenomenon as well as checking out its toolkit for trafficking prevention. This year, the day will focus on economic imbalances that drive women into slavery. See all of Global Sisters Report's trafficking coverage. 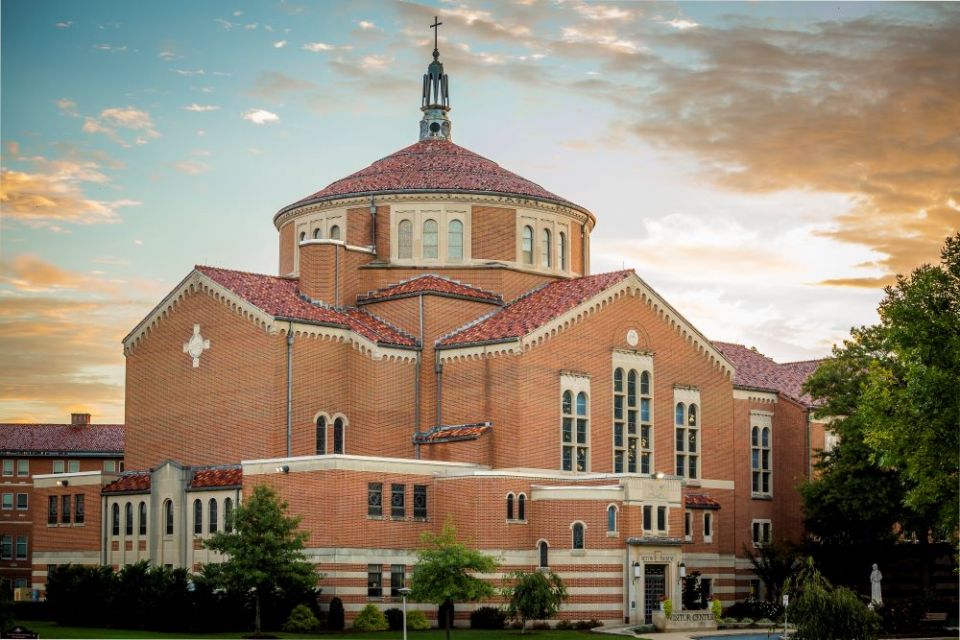 The National Shrine of St. Elizabeth Ann Seton in Emmitsburg, Maryland, launched a new series of video interviews with sisters from orders that trace their lineage to Seton, the first American-born saint.

The Feb. 2 debut of "Stories from the Sisters," which coincided with World Day of Consecrated Life, featured Sr. Mary Catherine Conway of the Daughters of Charity, who discussed her 40 years in Catholic education as a teacher and principal.

"Mother Seton's sisters have so much to offer to all of us in their everyday witness to our Lord," Rob Judge, executive director of the shrine, said in a press release. "Their stories provide a glimpse of the sacrifices they make but also their service to those experiencing poverty and the joy of life they experience as a religious. They offer us love, good humor and a witness to holiness that is needed now more than ever."

The videos in the series will be available on the shrine's social media channels and on its website. 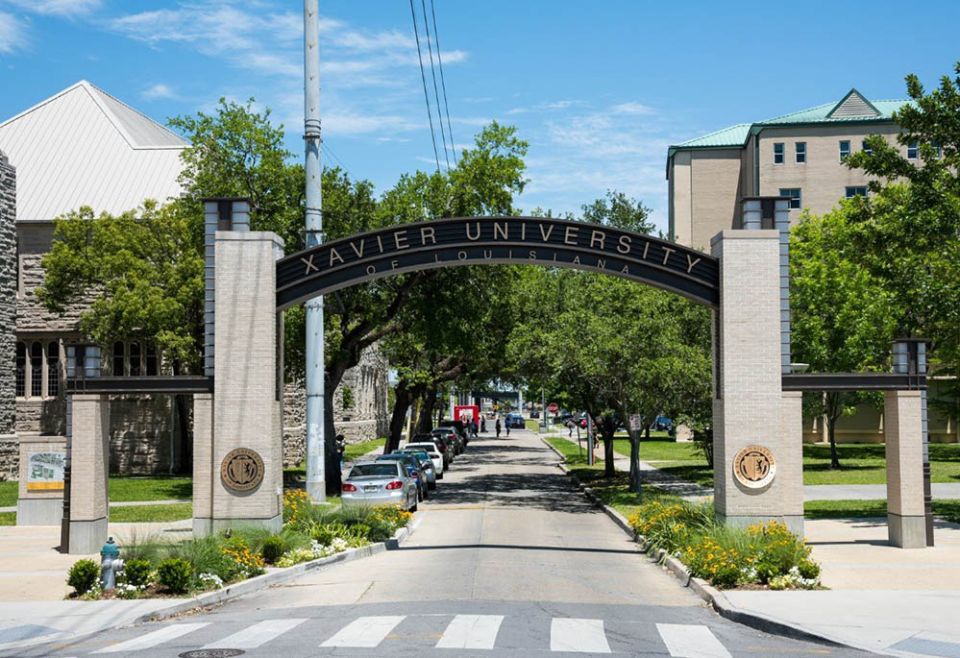 Following a series of bomb threats that closed down historically Black colleges and universities in the United States in the last month, including Feb. 1, the first day of Black History Month, the general council of the Adrian Dominican Sisters issued a statement calling the disruptions "an assault against the foundational freedoms of our democracy — and a threat to us all."

Standing in solidarity with their Black brothers and sisters, the Adrian Dominicans called for a "thorough investigation and prosecution of these despicable hate crimes" in their Feb. 2 statement.

"We pray that God's loving care and protection surround and safeguard them against all harm, and for the conversion of all whose hearts are poisoned by hatred."

The Leadership Conference of Women Religious also released a statement, writing Feb. 3 that the conference "deplores the recent spate of threats of violence and attempts to disrupt the vitally important work of Historically Black Colleges and Universities."

"We lament the racism that continues to afflict our communities and threaten the values that we hold dear," continued the statement by the conference, which represents 80% of sisters in the United States. "We pledge to stand with all whose dignity and lives are threatened by hate. We acknowledge our own complicity in the institutional racism that gives rise to hate and we commit to cleanse our hearts and rid our land of this evil. We promise to pray for our country and to continue to use our collective voice and our energy to build God's beloved community where all can live free from the violence of racism."

Event to focus on the importance of ministry satisfaction

Thanks to responses from more than 1,100 sisters spanning three generations, a recent survey explored the experiences of Catholic sisters in their ministries and found that "ministry satisfaction is an essential aspect of sisters' life commitment to God, their community, and the charism of religious life," according to a press release. 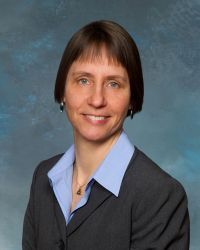 Marian Diaz and Divine Providence Sr. Maria Clara Kreis, who conducted the study, will host a free Zoom event at 4 p.m. Central time Feb. 15 to dive deeper into the survey results and their implications.

The event, "Factors for Thriving in Ministry among Catholic Sisters: Exploring Results from the Life-Satisfaction Scale for Apostolic Women Religious," is sponsored by Wisdom Ways Center for Spirituality, a ministry of the Sisters of St. Joseph of Carondelet of St. Paul, Minnesota. Diaz is the director of Wisdom Ways.

The hourlong conversation invites participants to "engage in a mutually enriching discussion of how these results can inform efforts to transition religious life into a viable and vital future," according to the event invitation.