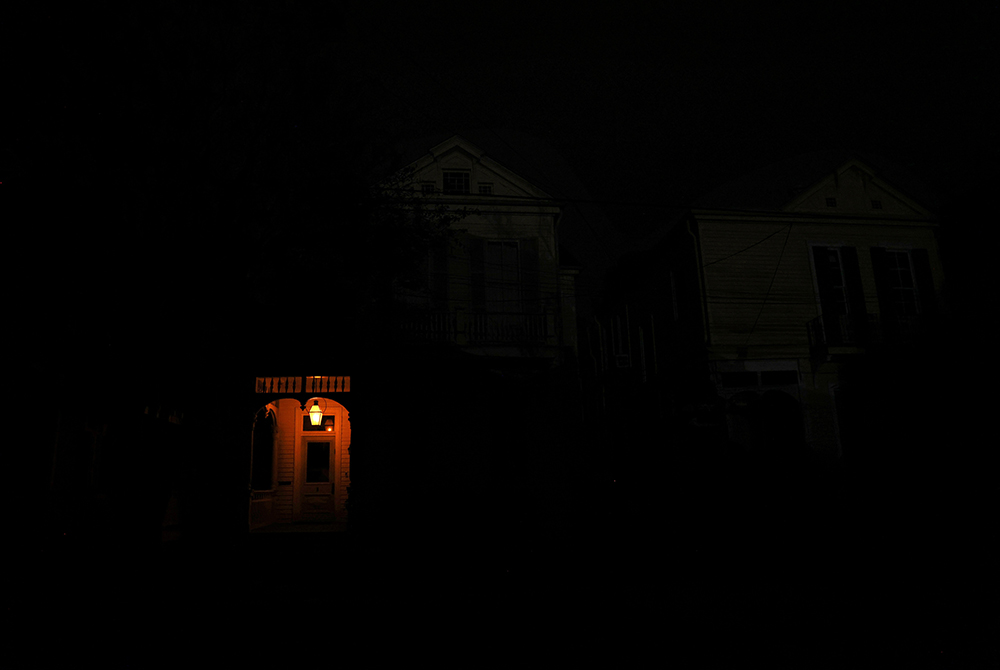 A front porch in New Orleans is lit by a flame on a dark street Aug. 31 in the midst of a power outage caused by Hurricane Ida. (CNS/Reuters/Leah Millis)

It appears that the many sisters in and around New Orleans came through Hurricane Ida unharmed. That doesn't mean, however, that life has been easy.

Since the hurricane, which made landfall Aug. 29, temperatures have been in the upper 80s and low 90s. A relative humidity around 80% has repeatedly pushed the heat index to 100 degrees — and there was no electricity in most of the city to run air conditioning, so there was no way to escape the sweltering heat. (On Sept. 3, officials said they expect most of New Orleans to have power again by Sept. 8.)

"The problem is there's no electricity, and it is hot," said Sr. Alicia Costa of the Sisters of the Holy Family. "Especially for our older sisters, the heat is really a problem."

The Sisters of the Holy Family are all safe, and the motherhouse — which had extensive flooding in Hurricane Katrina in 2005 — had no major damage. The order's nursing home across the street was evacuated before the storm and also suffered no major damage.

The lack of electricity and internet has led to various disruptions. Costa had to travel 135 miles west to Lafayette, where sisters minister at a parish, to pay the congregation's bills. While she enjoys the air conditioning while she works, "I feel guilty."

Sr. Mary Lou Specha, a Sister of the Presentation of the Blessed Virgin Mary, reports that Hotel Hope, where she is executive director and Presentation Sr. Julie Marsh, her roommate, is director of operations, had only minor damage. Hotel Hope provides short-term emergency housing for families experiencing homelessness. Marsh and the residents are all safe, and Specha has been in Florida caring for her mother.

"Sister Julie stayed at the hotel and was a hero," Specha said. "Now, the power is really the problem, and it looks like it's going to be a problem for a while."

The weather is so hot and humid, the sisters are trying to find some other place for the residents to go.

"They can't stay there without electricity. They can't, it's so hot," she said. "But the most important thing is everybody is safe."

St. Joseph Sr. Joan Laplace reports the sisters in Baton Rouge are safe and secure. Like in New Orleans, there is no electricity, but power is also expected to be restored there by Sept. 8.

There are seven St. Joseph sisters who minister in New Orleans, Laplace said. One went to the convent in Baton Rouge; the others are staying with family and friends.

The Daughters of Charity have 11 sisters who minister in New Orleans who have all been reported safe.

Many church buildings in the region, however, suffered extensive damage, reported the Clarion Herald, the archdiocesan newspaper. Among those with damage is the historic Ursuline Convent, which had damage to its gates, roof and shutters. Ida also damaged the roof and spires of nearby St. Louis Cathedral. 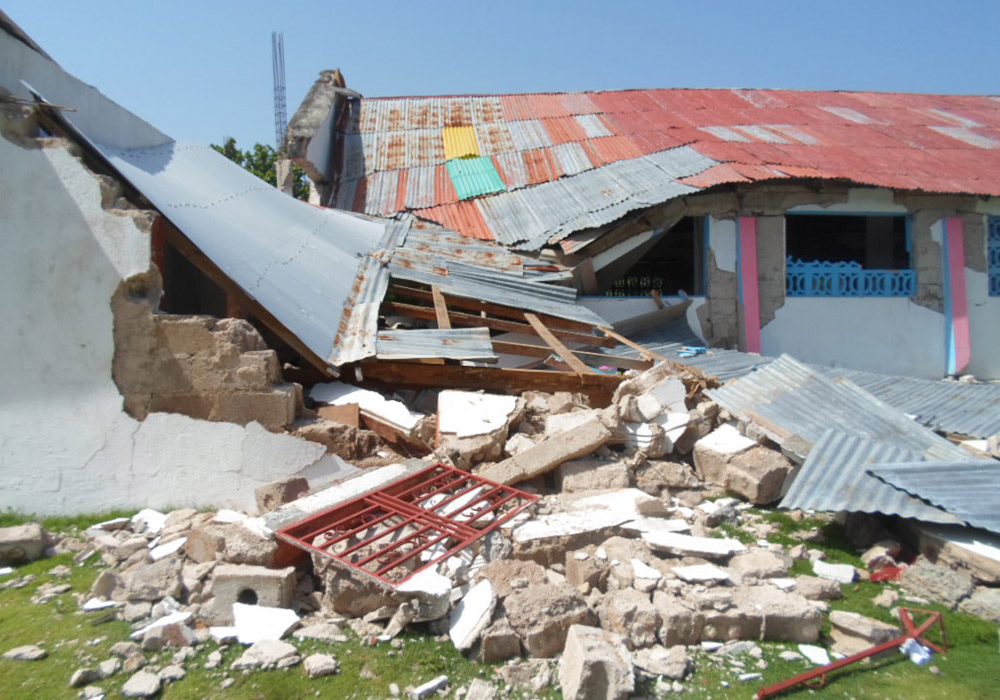 The collapsed church in Toirac, Haiti, where 20 people perished during the Aug. 14 earthquake. (Courtesy of the Missionary Sisters of the Immaculate Heart of Mary)

The response to the crippling Aug. 14 earthquake in southern Haiti continues, with Haiti-based congregations pulling together resources to assist disaster survivors.

In an Aug. 30 report to supporters, Sr. Annamma Augustine, an Indian Missionary Sister of the Immaculate Heart of Mary, whose congregation is known as the ICM Sisters, reported that seven sisters and postulants representing her congregation and the Congregation of the Religious of Jesus and Mary traveled from the Haitian capital of Port-au-Prince to Toirac on Aug. 24 for three days.

Toirac is a southern village where at least 20 people died when a church collapsed during the 7.2-magnitude earthquake, killing residents who were attending a funeral. Aid had been slow in arriving to the locale.

Arriving in the village, Augustine said, "We could not find a single house which was still standing." However, she said the death toll could have been higher had the quake occurred at another time of day. As it was, at 8:30 in the morning, "people were already out of the house for their activities."

The sisters distributed rice, beans and other food; cleaning and health items; and water. 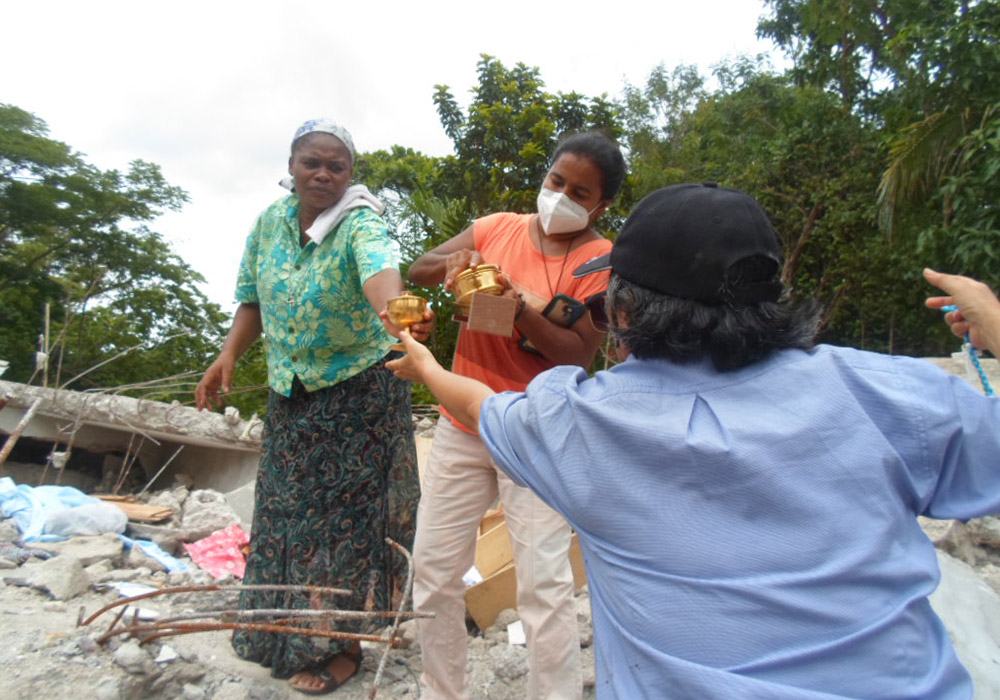 A small orphanage in Sous Lavi was destroyed in the 7.2-magnitude earthquake, killing a priest who worked there. (Courtesy of the Missionary Sisters of the Immaculate Heart of Mary)

Augustine added: "It is really a nightmare for the people. Many badly affected areas are difficult to reach, and they don't get any help. Our aim is to reach those people who are forgotten or those who no longer have the strength to stand in line."

"There are many needs," she said. "People are left with nothing. All their earnings for their whole lifetime is gone within a few seconds."

Faith is keeping people strong, she said, "but they need listening ears where they can express their pain and suffering. They need a shelter to stay out of the rain and sun. Water sources are destroyed, and there is no drinking water."

Augustine said the sisters plan to continue to help the earthquake-hit regions.

"We are going to other places where the help has not reached [people]," she said. "People need everything now. They lost it all."

Reuters reported Aug. 30 that hunger is worsening in the areas the earthquake hit the hardest. At least 2,000 people died in the quake. 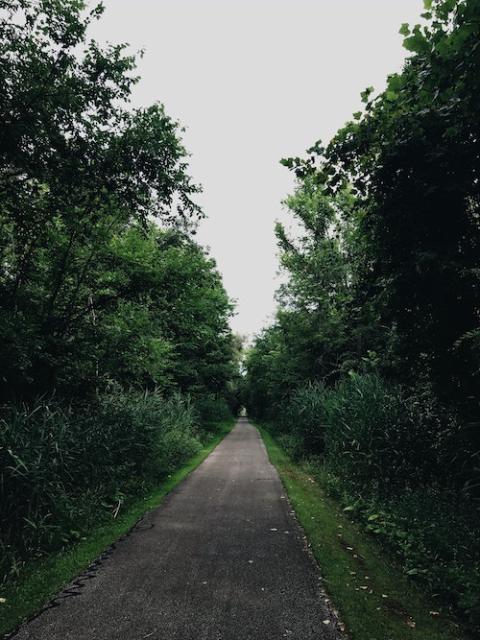 A new bike path in Ohio, courtesy of sisters

You may have heard of Cycling With Sisters. Now, residents in rural Ohio will be cycling because of sisters.

Construction has begun on a 2.1-mile trail in Maria Stein, about 60 miles northwest of Dayton, that will give a paved path to bikers and hikers. Officials hope the trail will eventually be extended north to the town of Chickasaw.

The trail is possible thanks to the Sisters of the Precious Blood of Dayton, who donated 2.6 acres for the path and surrounding green space.

"We wanted to be good neighbors, and we thought the bike path would be a good thing for families and the community," Sr. Linda Pleiman said. "We were happy to help."

The area is rural and the trail only connects a township park and a nearby industrial park, but there is a big bicycle connection: The Bicycle Museum of America is less than 10 miles away in New Bremen.

While there was extensive news coverage of the evacuation of Americans and their Afghan allies from the Kabul airport, there wasn't much attention given to another dramatic exodus taking place: Asia News reports an "unprecedented" movement of Afghanis crossing the border from Afghanistan to Pakistan.

There were already approximately 1.5 million Afghan refugees in Pakistan, Asia News reports, and officials estimate the Taliban takeover of Afghanistan could bring another 500,000.

While the Pakistani government is taking the lead on providing temporary housing, Caritas Pakistan is already on the ground and ready to provide support, Asia News reports. While the pundits in the United States wring their hands and argue over America's departure and how it was handled, the church is serving those most in need.