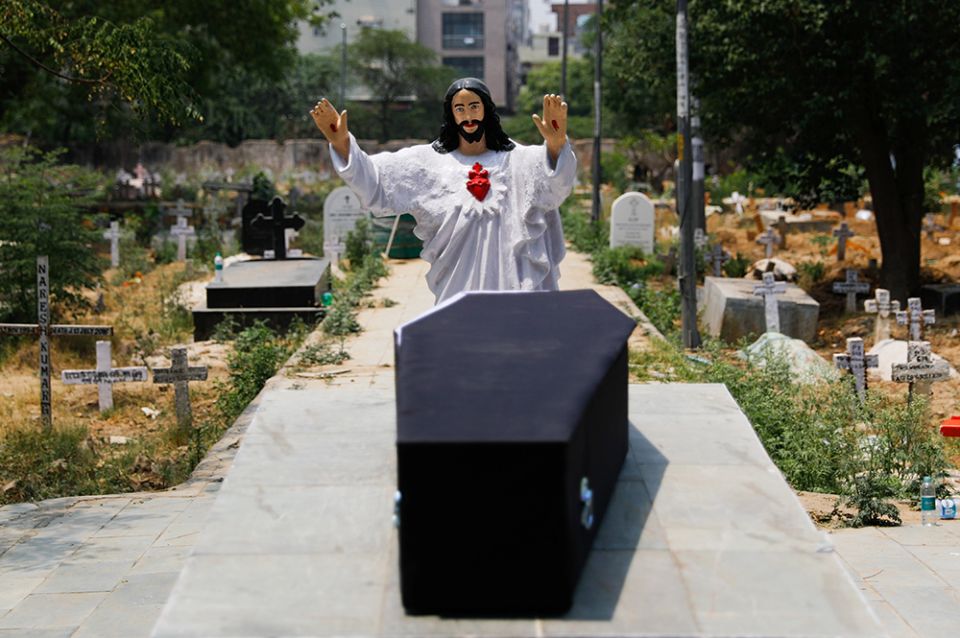 A statue of Jesus stands over the casket of a person who died after contracting COVID-19 before the burial at a graveyard in New Delhi on April 29, 2021. (CNS/Reuters/Adnan Abidi)

Government authorities declined to pay the COVID-19 compensation for the deaths of four Catholic sisters to their community in the southern Indian state of Kerala.

The Sisters of the Destitute, an Indigenous order, say they are owed 50,000 rupees ($630) for each of the sisters who died, as the Supreme Court of India requires the provincial governments to pay the families of those who died of the coronavirus.

"I moved the claims for compensation," Sr. Kiran Mandoth told UCA News. "The officials at the village and district made me run from pillar to post to gather nearly a dozen documents including death certificates. I was made to wait for over a year only to be told that nuns were not eligible for compensation."

UCA News reported that government officials are making a distinction between congregations and relatives of the deceased, who are the ones legally eligible for the claim.

But "once a girl becomes a nun, her religious congregation becomes her family," Mandoth said. "In the case of the nuns, the officials accepted the applications along with legal documents provided by the congregation. Then why this discriminatory attitude when it comes to paying?"

Fr. Jacob Palakkappilly, the spokesman of the Kerala Catholic Bishops' Council, appealed to the government to treat every citizen of India equally and urged the state human rights commission to intervene.

The Latin American Episcopal Council (CELAM, the region's council of bishops) hosted its assembly July 12-14 in Bogotá, Colombia. In the spirit of synodality, the Confederation of Latin American/Caribbean Religious (CLAR, which unites the region's national religious conferences) participated in the assembly, which also inaugurated the council's new headquarters.

"The present is a propitious time to strengthen our personal encounter with Jesus Christ in the reality of the continent and in the heart of the Church," the assembly's final message stated. "We need an open-eyed spirituality to have a contemplative gaze. This gaze discovers God in the depths of human and historical reality; it is not an aseptic or distant contemplation but rather an open sensitivity to the pain and joys of our peoples."

The document also calls on the church to "boldly and creatively announce the Gospel of Life," particularly in neglected communities, and to end clericalism.

"We want to encourage community consultation and discernment, opening ourselves more and more to the participation of the laity and their influence in decision-making."

Asking for St. Oscar Romero and other Latin American martyrs to grant the church strength and courage in its commitment for justice and fraternity, the joint statement also reaffirms "our preferential option for the poor."

The message cites Pope Francis' warning in Querida Amazonía regarding a globalized economy that can "shamelessly damage the environment and our human, social and cultural wealth without being able to listen to the voices of the original peoples, their cultures and their visions of the world." Such an orientation helps the church be a "poor church for the poor," one that rethinks its way of life, language, and ecclesial structures that prevent a connection with the marginalized.

"We encourage a culture of encounter so that in times of war our region is a space of peace," the message concludes. "We place this message in the hands of Our Lady of Guadalupe, patron saint of our continent; she will know how to accompany us as a Mother in this new stage of the Church of Latin America and the Caribbean."

The Dominican Sisters of Sinsinawa, Wisconsin, are celebrating 175 years of preaching and teaching the Gospel "in word and deed wherever they are called." The community, which more than 3,400 women have joined since 1847, spans more than 500 ministry locations throughout the United States and beyond, according to a press release.

A new video commemorating this anniversary, "In Good Company: The Dominican Sisters of Sinsinawa," will premiere on YouTube at 6:30 p.m. Central time on Aug. 11. The event will also include a live chat and question-and-answer session beginning at 6 p.m.

The 30-minute video traces the history of the congregation from its origins, when most sisters were educators, to modern-day ministries in multiple fields.

"It was the sisters' love for one another and the Dominican way of life that really drew me" to become a sister, Dominican Sr. Priscilla Torres said in the press release. "We are all different. And yet when we come together, we are one collective, faithful group of women."

Loras College Productions of Dubuque, Iowa, produced the video, which was partially funded with a grant from the Fred J. Brunner Foundation. The video will be available here. 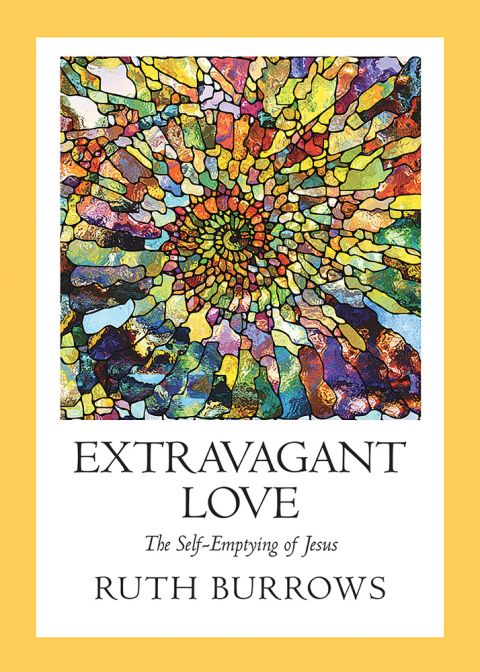 Paulist Press has announced the publication of a new book on the theme of the "self-outpouring in love," or the kenosis, of Jesus Christ.

Extravagant Love: The Self-Emptying of Jesus is written by the acclaimed spiritual author Ruth Burrows, the pen name of Sister Rachel, a Carmelite monastic nun who lives in Quidenham, England.

In a description of the book, the New Jersey-based publisher notes that Christ's kenosis is at the heart of the identity of the Sisters of Jesus of Nazareth in Zimbabwe*, for whom these reflections were initially composed.

"In baptism we are all plunged into the self-emptying life of Jesus and are called to live out this way of love in whatever situations we find ourselves," the publisher said. "It is not surprising, then, that while the book was originally written to benefit a particular religious community it is, in fact, deeply significant to all followers of Jesus."

Burrows has authored more than a dozen books on prayer and the mystical life.

*An earlier version of this story was unclear about which community of Sisters of Charity of Nazareth received the reflections.

Sr. Catherine McNamee, 'one of the giants in Catholic education,' dies at 89