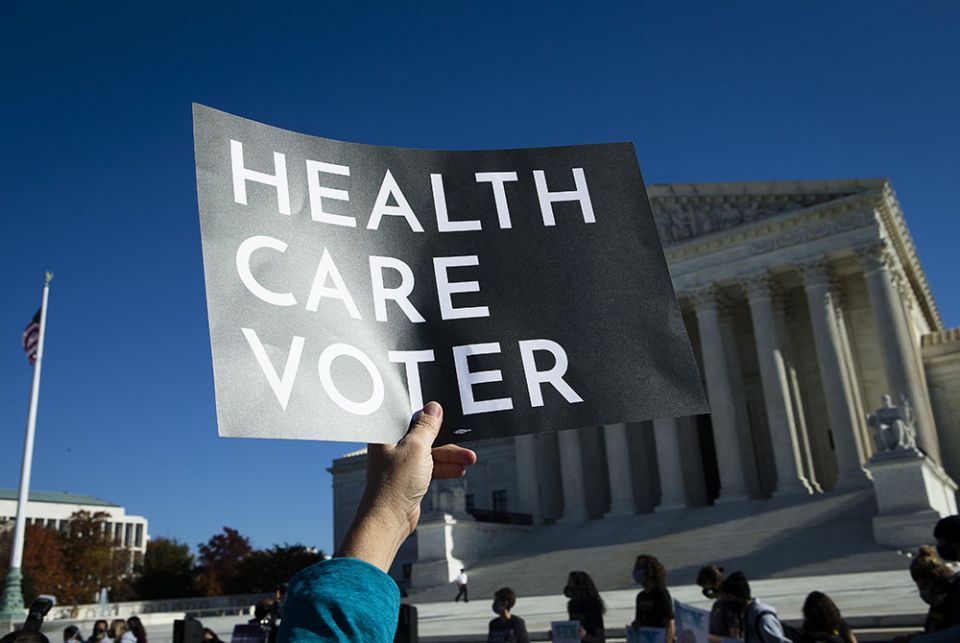 People demonstrate in support of the Affordable Care Act outside the U.S. Supreme Court Nov. 10 in Washington. (CNS/Tyler Orsburn)

The Catholic Health Association, whose support was key in passing the sweeping health care law in 2010, is urging justices to keep the measure, commonly known as Obamacare, on the books.

As the court heard oral arguments Nov. 10, the association issued a statement from Mercy Sr. Mary Haddad, president and CEO of the organization, which represents more than 2,200 Catholic health facilities.

"Striking down the ACA would be devastating to the approximately 20 million Americans who gained coverage under the law, including 15 million low-income individuals who are covered by Medicaid expansion. It would adversely impact the approximately 130 million Americans with pre-existing medical conditions, including those diagnosed with COVID-19. The pain of repeal would be borne by some of the most vulnerable in our society — pregnant women, racial minorities, and low-income individuals and families," Haddad said in the statement.

"CHA believes health care is a basic human right and that the ACA has been vital in expanding access to care. At a time when our country is faced with a pandemic, access to health care is more critical than ever. Our members witness firsthand the devastating impact that a lack of affordable health insurance and health care has on individuals, families and communities, especially during the pandemic. The uninsured often do not seek out the care they need and may suffer unnecessarily if their illness or injury gets worse. If the Supreme Court strikes down the entire ACA, it would wreak havoc on the U.S. health care system and irreparably harm those most in need of care. We strongly urge the Court to rule that the individual mandate is severable, as clearly intended by Congress when it eliminated the individual mandate penalty but did not repeal the entire ACA."

Texas and 18 other states are suing to end the law, arguing that since the court ruled in 2012 the act was constitutional because the requirement to buy health insurance could be seen as a tax, the law is now unconstitutional because Congress in 2017 removed any penalties from the mandate.

The Catholic Health Association in May filed a friend of the court brief in the case, arguing that Congress did not want the entire act repealed rather than just a part of it, or it would have done so.