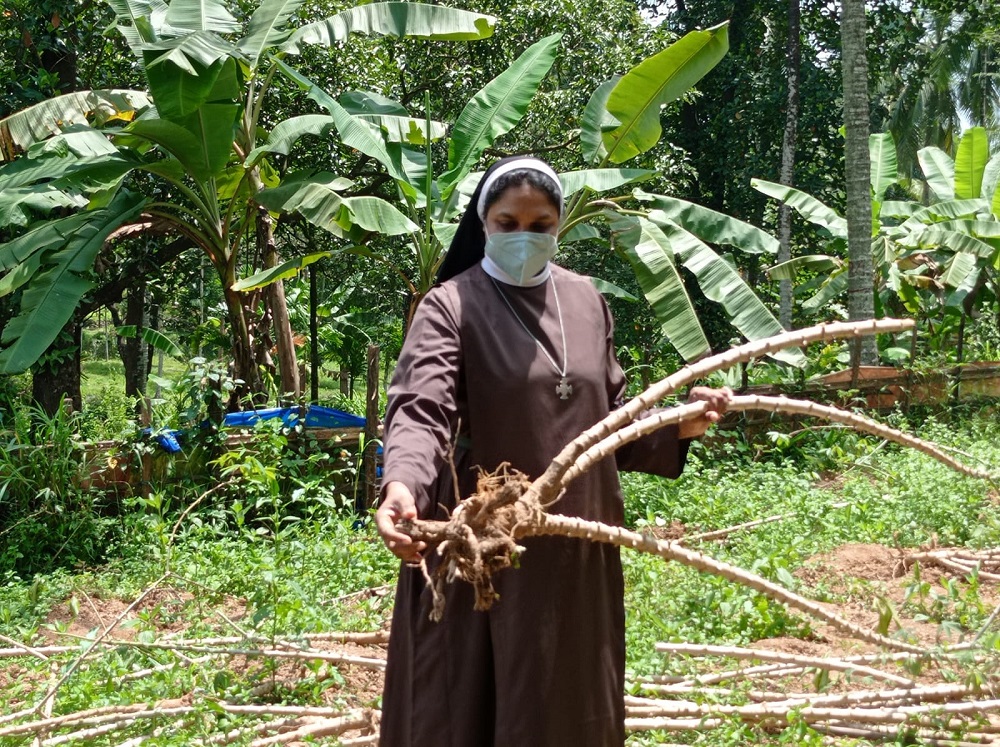 Sr. Jofi Joseph shows the roots of a cassava plant in the Congregation of the Mother of Carmel's garden in Muthukadu, Kerala, India, that had been eaten by wild boars. (Courtesy of Jofi Joseph)

A Catholic nun was among 16 people in Kerala who have received court permission to kill wild boars that destroy their farms.

The Kerala High Court on Sept. 18 gave special permission to Sr. Jofi Joseph and other members of a farmers group after they complained about the menace from the boars.

"Whatever we plant, the pigs destroy them within a few days, and we are not able to procure anything from our farm," Joseph, a member of the Congregation of the Mother of Carmel, told Matters India on Sept. 20.

She said the court order gave the nuns at her St. Agnes Convent and other farmers in Muthukadu (which means "thick forest"), a village in Kerala's Kozhikode district, much relief.

"Many of our sisters were engaged in farming in our 4-acre land during the pandemic, but we got no produce," said Joseph, showing empty roots of cassava plants they had planted. The nuns' vegetable garden also grows cashew, areca, coconuts and other varieties of plants.

The court order allows Joseph to keep a licensed gun or any other weapon to kill wild boars. The only condition is that she has to inform the Kerala Forest Department when she kills a boar.

Jijo Joseph, a Catholic neighbor who was also among the 16 to receive the court permission, said the villagers had filed the suit with the High Court under the aegis of We-Farm, a group involved in protecting the rights of farmers in Kerala.

We-Farm was found by Carmelite Fr. Jose Thundappara in 2014, when some villagers were caught in conflict with the Forest Department for fishing in a reservoir inside the forest. The patron for the group is Bishop Remigius Maria Paul Inchananiyil of Thamarassery.

Jijo Joseph said the wild animals not only destroy agriculture, but cause various diseases.

"The Nipah [virus] affected areas are also affected by the wild boars, and the possibility of wild boars spreading Nipah cannot be ruled out," he told Matters India.

The farmers have also requested the Forest Department to allow them to not only kill the wild boars, but eat or share the meat with other farmers who were victims of wildlife attack.

Jofi Joseph said her convent is also a member of the We-Farm movement and is actively involved for the protection of farmers rights in the village.