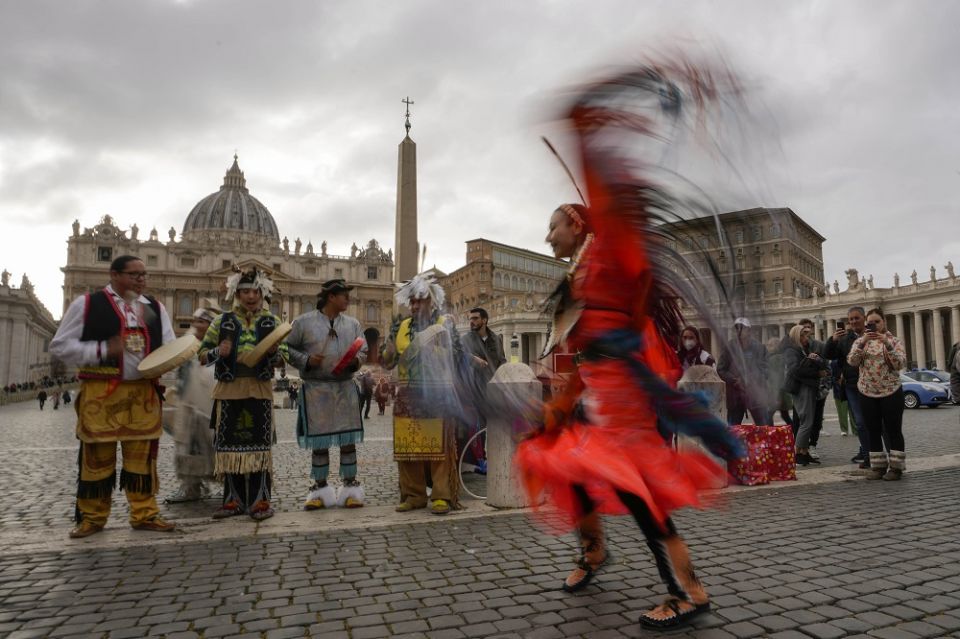 Members of the Assembly of First Nations perform March 31 in St. Peter's Square at the Vatican. As Native Americans cautiously welcome Pope Francis' historic 2022 apology for abuses at Catholic-run boarding schools for Indigenous children in Canada, U.S. churches are bracing for an unprecedented reckoning with their own legacies of helping operate such schools. (AP Photo/Alessandra Tarantino, File)

As Native Americans cautiously welcome Pope Francis' historic apology for abuses at Catholic-run boarding schools for Indigenous children in Canada, U.S. churches are bracing for an unprecedented reckoning with their own legacies of operating such schools.

Church schools are likely to feature prominently in a report from the U.S. Department of the Interior, led by the first-ever Native American cabinet secretary, Deb Haaland, due to be released later this month. The report, prompted by last year's discovery of hundreds of unmarked graves at former residential school sites in Canada, will focus on the loss of life and the enduring traumas the U.S. system inflicted on Indigenous children from the 19th to mid-20th centuries.

From Episcopalians to Quakers to Catholic dioceses in Oklahoma, faith groups have either started or intensified efforts in the past year to research and atone for their prior roles in the boarding school system, which Native children were forced to attend — cutting them off from their families, tribes and traditions.

While the pope's April 1 apology was addressed to Indigenous groups from Canada, people were listening south of the border.

"An apology is the best way to start any conversation," said Roy Callison, a Catholic deacon and Cherokee Nation member helping coordinate the Oklahoma Catholic Native Schools Project, which includes listening sessions for those affected by the boarding school legacy. "That's the first step to trying to get healing."

In his meeting with Canada's Indigenous delegations, Francis asked forgiveness "for the role that a number of Catholics ... had in all these things that wounded you, in the abuses you suffered and in the lack of respect shown for your identity, your culture and even your spiritual values."

Francis "did something really important, which is name the importance of being indignant at this history," said Maka Black Elk, executive director of truth and healing for Red Cloud Indian School on the Pine Ridge Indian Reservation in South Dakota.

That history "is shameful, and it is not something we should accept," said Black Elk, who is Oglala Lakota.

Red Cloud, affiliated with the Catholic Jesuit order, was for generations a boarding school for Lakota children. It's now a day school incorporating Lakota leadership, language and traditions. Black Elk is guiding a reckoning process that includes archival research and hearing the stories of former students.

That discovery, followed by others across Canada, prompted Haaland to commission her department's report.

"This history in the United States has not been addressed in the same way it has been addressed in Canada," Black Elk said. The Interior report "will be an important first step about the work that needs to happen in this country."

Church leaders are getting ready. The report "will likely bring to light some very troubling information," said a letter circulated last fall to members of the U.S. Conference of Catholic Bishops from two colleagues who chaired committees related to the issue. The letter urged bishops to build relationships with local Indigenous communities and engage "in a real and honest dialogue about reactions to the report and what steps are needed to go forward together."

Conditions varied at boarding schools in the United States, with some described as unsafe, unsanitary and scenes of physical or sexual abuse. Other former students recall their school years as positive times of learning, friendship and extracurricular activities.

Indigenous groups note that even the better schools were part of a project to assimilate children into a predominately white, Christian society and break down their tribal identities, customs and languages — what many Indigenous groups call a cultural genocide.

"The very process of boarding schools is violent and damaging," said Bryan Rindfleisch, an expert in Native American history at Marquette University who is helping Catholics in Oklahoma research their school legacy.

There were at least 367 boarding schools across the United States in the 19th and 20th centuries, according to the National Native American Boarding School Healing Coalition, a Minneapolis-based advocacy group.

Most were government-run; many others were run by Catholic and Protestant churches.

The national healing coalition called Pope Francis' comments a historic first step, but urged the Vatican to repatriate Indigenous artifacts in its museum collections and called on religious organizations to open their school archives.

In listening sessions held through the Oklahoma Catholic Native Schools Project, many participants told positive stories of school experiences, Callison said, though the church is committed to documenting the traumatic ones too. "You're going to hear things you don't want to hear," he said.

The project will also include archival research and individual interviews with those affected. At least 11 Catholic boarding schools operated in Oklahoma.

"We need to get to the truth before we can deal with whatever hurt or celebrate whatever success" the schools achieved, Oklahoma City Archbishop Paul Coakley said. 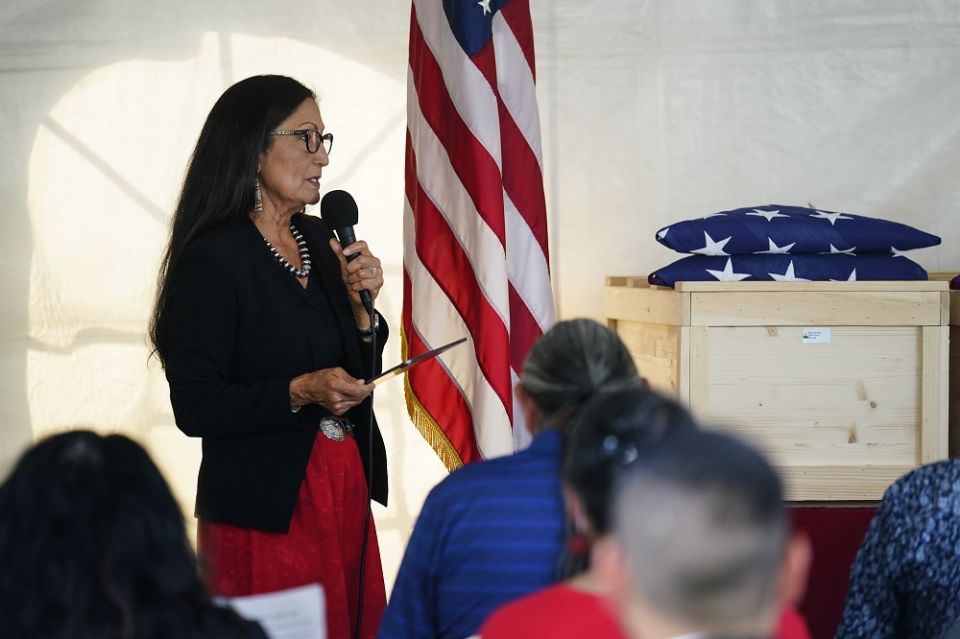 Interior Secretary Deb Haaland speaks during a July 14, 2021, ceremony at the U.S. Army's Carlisle Barracks in Carlisle, Pennsylvania. A report from the U.S. Department of the Interior, led by the first-ever Native American cabinet secretary, Haaland, due to be released in April 2022, will focus on the loss of life and the enduring traumas of the U.S. boarding school system, in which Native Americans were taken to hundreds of government- and church-run facilities from the 19th to mid-20th centuries. (AP Photo/Matt Rourke, File)

Several church groups — including Quakers, Methodists and some Catholic religious orders — are backing pending legislation in Congress that would go beyond the Interior report. It would create a truth and healing commission, modeled on Canada's, to investigate the boarding school legacy.

The New England Yearly Meeting of Friends — a regional group of congregations — issued an apology last year for Quakers' historic sponsorship of such schools, acknowledging they were undertaken with "spiritual and cultural arrogance."

"We are deeply sorry for our part in the vast suffering caused by this system and the continuing effects," the New England group said.

It's important for Quakers to accept such responsibility, said Paula Palmer, a Quaker from Colorado whose research has identified about 30 Native American boarding and day schools that were run by Quakers.

"The yearly meetings voted to support, operate and finance" the schools, she said. "So it's really the yearly meetings who have the responsibility to respond. They were the ones who also participated in the whole project of forced assimilation of Indigenous children."

The Jesuit Conference of Canada and the United States has hired an archival researcher to document its own boarding school history.

The order is "committed to examining and sharing the truth of our history, even where that is difficult," said Fr. Ted Penton, secretary of the Jesuit conference's Office of Justice and Ecology.

The Episcopal Church's General Convention in July is expected to vote on a statement that would "acknowledge the intergenerational trauma caused by genocide, colonialism" and the operation of boarding schools and "other systems based on white supremacy."

The convention will also consider authorizing a "comprehensive and complete investigation" of the church's operation of such schools. The proposals came from a group appointed by denominational leaders.

Such measures are strong, but local dioceses also need to research their own histories and advocate for Indigenous peoples, said the Rev. Rachel Taber-Hamilton, rector of Trinity Episcopal Church in Everett, Washington. Taber-Hamilton, whose heritage includes the Shackan First Nation of Canada, is an Episcopal Church representative to the worldwide Anglican Indigenous Network.

"It's not enough to say, 'I'm sorry, and here's some money,' " she said. "We first have to do some very hard work of listening to the pain."