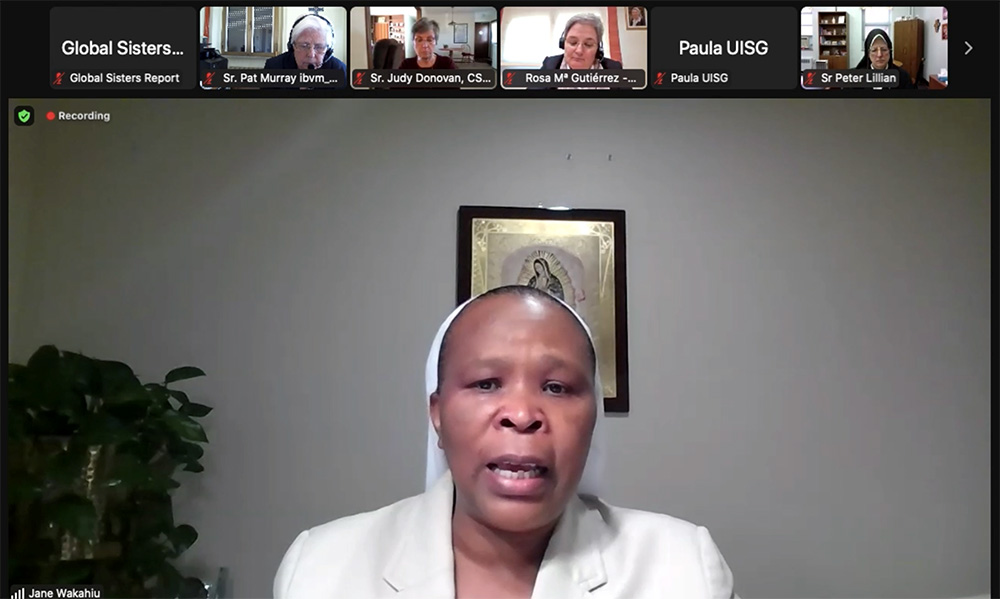 Sr. Jane Wakahiu, associate vice president of program operations and head of the Catholic Sisters Initiative at the Conrad N. Hilton Foundation, speaks at an April 11 forum on aging sponsored by the International Union of Superiors General. (GSR screenshot)

Caring for elderly sisters can be a challenge, but it is important to remember that they are an integral part of the congregation.

That was the message from panel members in the International Union of Superiors General's April 11 webinar "Our Sisters, Our Future: Health and Spiritual Care for Aging." The first webinar in the two-part series was March 9.

Sr. Jane Wakahiu, associate vice president of program operations and head of the Catholic Sisters Initiative at the Conrad N. Hilton Foundation, said the essentials are the same regardless of geography. Wakahiu is a member of the Little Sisters of St. Francis; the webinars were sponsored by the Hilton Foundation. (The Hilton Foundation is also a major funder of Global Sisters Report.)

"We are discerning together the future," Wakahiu said. "While that future may look different on each continent or for each congregation, the global sisterhood provides an opportunity to learn from those who are ahead and the opportunities they have used to address the question of elderly sisters."

The session began with a presentation by Jesuit Fr. Thomas Gaunt, executive director of the Center for Applied Research in the Apostolate at Georgetown University, who shared the results of a survey of participants who attended the first session. More than 400 people responded to the survey.

Gaunt said concerns from around the world included the fear of sisters going into a separate home for the elderly, the difficulty of acceptance and the meaning of their mission, and the lack of a retirement culture — facilities for elderly religious are seen as a place to go to die.

"But a particular concern, highlighted a number of times, was the loneliness of elderly sisters. Being by themselves and not part of a community's mission becomes a very serious issue," Gaunt said. "These were common concerns that came up no matter where sisters are."

Mother Mary Claude Oguh, general superior of the Sisters of the Immaculate Heart of Mary, Mother of Christ, in Nigeria, said another common concern is finances.

"It is capital-intensive" to build a retirement facility, Oguh said. "And construction of the structure is not the only issue; you also must prepare for the human resources."

She suggested adding money to a retirement fund starting the day a novice joins a congregation.

Sr. Judy Donovan of the Sisters of St. Joseph of Lyon, Maine, said her community used to own a nursing home that cared for the sisters until their last day. But when there were no longer sisters to run it, they transferred the nursing home to a Catholic health care system with the agreement that sisters would always have a place there. The health care system then sold the facility to a for-profit system, and the sisters-only unit became a co-ed wing.

Donovan said they looked to partner with another congregation, but the closest community with a health care facility is three hours away.

Other panelists included Sr. Rosa Gutiérrez of the Sisters Hospitallers of the Sacred Heart of Jesus; Sr. Peter Lillian Di Maria of he Carmelite Sisters for the Aged and Infirm; Sr. Anne Marie Grapton of the Sisters of Providence of La Pommeraye; and Sr. Agnetia Naval of the Missionary Sisters of the Immaculate Conception of the Mother of God.