Washington — Congregations of women religious throughout the world can feel overwhelmed with the care needed by older sisters, but often, resources taken for granted in developed countries do not even exist in other countries. 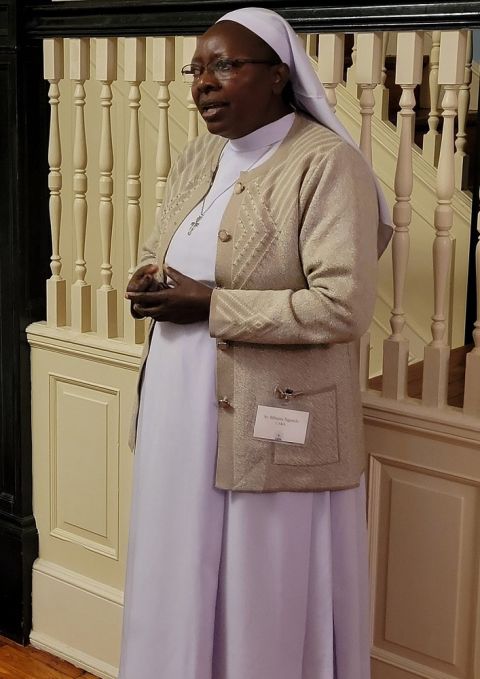 Sr. Bibiana Ngundo of the Catholic University of Eastern Africa in Nairobi, Kenya, speaks to a small audience June 23 in Washington. (CNS/Barb Fraze)

For instance, while congregations worldwide provide their older sisters with access to spiritual care, only 11% of nuns in Kenya have facilities with accessibility ramps, and no free medical equipment is available.

In some countries, members of women religious don't even talk about problems of their aging members.

The Center for Applied Research in the Apostolate at Georgetown University is engaged in a global research partnership to identify the needs of Catholic sisters' communities in caring for their elderly and infirm sisters in Kenya, Uganda, Zambia, Ghana, Nigeria, Mexico, and the United States. The researchers have discovered that, in many cases, women religious did not realize other congregations faced the same problems they did.

Some of the researchers spoke to a small group in Washington in June.

Every religious community has been "suffering the impact of the aging process — alone," said Sr. Brenda Hernandez, a member of the Daughters of Immaculate Mary of Guadalupe of Mexico City who has been involved in research for the CARA project. "We lack facilities, we lack assistance" as well as trained caregivers and money to support the aging sisters.

Sr. Bibiana Ngundo, a member of the Little Sisters of St. Francis who does research at the Catholic University of Eastern Africa in Nairobi, Kenya, had similar findings that showed African sisters do not talk about aging.

"Sisters who were put in the home for aged were never prepared," she said, and one even refused, saying, "No, if I go, I die."

"Sisters need to be prepared from their 40s, 50s and 60s," she said, emphasizing that religious congregations must talk about aging.

Assumption Sr. Candida Mukundi, who works on the research along with Ngundo, spoke of the challenge of the lack of homes for the aging sisters and said the congregations could help each other by collaborating.

"Every congregation was taking care of their own sisters," she said and, while participating in the research, members of different orders learned they could share their problems with one another.

She and her colleagues spoke to members of 57 religious congregations in Kenya. One of the first things they did was train the religious superiors on how to fill out the Google forms survey.

At the 12th Triennial Conference on the History of Women Religious at the University of Notre Dame's Cushwa Center in late June, Mukundi and others involved in the project presented some of their research.

Mukundi said the findings were "a wakeup call to congregations in Kenya to become more aggressive in vocation recruitment, sustainability of vocations, preparation for old age, keeping abreast with signs of the time in terms of apostolates and in the care of elderly sisters."

She said the nuns were hoping to share resources and to get funding for a central physical structure to allow aging sisters to live in a holistic community life. Among other things, this would make it easier for experts in geriatrics to offer services.

It also would help alleviate some of the stress on the sisters.

"I am old and weak, but sometimes I have to carry water for bathing in a bucket for lack of showers," one aging nun told them in the survey.

News | In Kenya and Mexico, nuns discover the need to coordinate resources for aged care