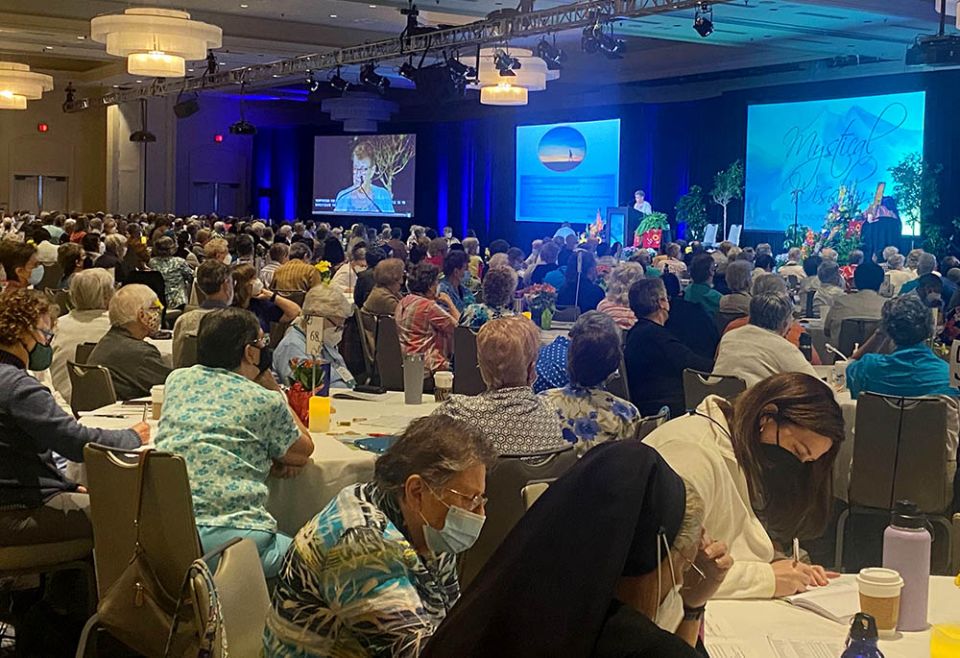 Sr. Jane Herb of the Sisters, Servants of the Immaculate Heart of Mary gives the presidential address Aug. 10 to the 2022 assembly of the Leadership Conference of Women Religious, held Aug. 9-12 in St. Louis. (GSR photo/Soli Salgado)

St. Louis — Staring down a future of uncertainty, religious life finds itself in need of a map.

But creating an appropriately prophetic map must include a range of perspectives that can shed light on the various obstacles and possibilities before sisters, Sr. Jane Herb said in her presidential address before the Leadership Conference of Women Religious on Aug. 10.

Herb, a member of the Sisters, Servants of the Immaculate Heart of Mary, is the president of LCWR, which represents roughly 80% of Catholic sisters in the United States. (Following this year's general assembly, held Aug. 9-12 in St. Louis, Herb will transition to past-president within the leadership triumvirate.)

As congregations confront their aging demographics — presenting sisters with property and building issues, as well as the challenge to be creative in continuing sponsored ministries — Herb said she's realized that "while we are true to our founding charisms, it seems we are leaning into the future of religious life, perhaps not simply the survival of our own congregations."

The novel A Mapmaker's Dream, by James Cowan, was a source of inspiration for Herb: While sitting in a cell, a monk created a map of the world based on the perspectives and experiences that his visitors offered him. "To complete an exact map of the world, the monk realizes that he must learn to look at the problem from another perspective and to abandon the normal perceptions of the work to attain a deeper sensibility," she said.

"I believe that is our journey also."

Now the question before religious leaders is "who might be invited into 'our cells' as we shape the future of religious life," Herb said, sharing four "map-shaping" conversations she'd previously had with others whom she had invited into her proverbial cell.

"The image of seasons surfaced, and it seems that we are in the season of autumn, letting go and being open to what is to come," she said of their conversation. While they tend to seeds of new life, hopeful for what emerges in the spring, "I don't believe that we can avoid a time of winter, where there is starkness, an emptiness" — a season she imagines for the next three to five years. 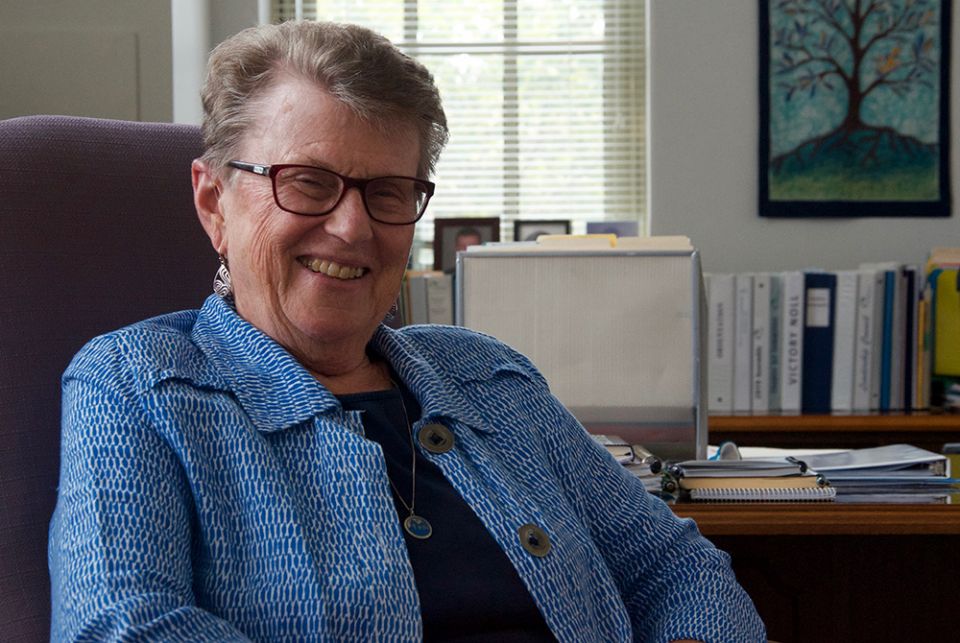 Sr. Jane Herb in her office July 19, 2021, at the Sisters, Servants of the Immaculate Heart of Mary motherhouse in Monroe, Michigan (GSR photo/Dan Stockman)

The second conversation, Herb said, happened at the spring meeting for LCWR's Contemporary Religious Life Committee, which emphasized the need to "simplify structures as new ministries are explored together" in the face of shrinking communities.

Both conversations, she said, recognize the need to "widen our tent" when looking to the future, including the voices of younger and newer members, lay colleagues and advisers, and embracing interreligious dialogue.

The third and fourth conversations Herb held in her "cell" were with members of Giving Voice and the Leadership Collaborative. The intergenerational approach drew inspiration from both an "On Being" episode (in which host Krista Tippett spoke with Jen Bailey, a young pastor and social innovator, on the importance of "the long view"), as well as a new book by Sinsinawa Dominican Sr. Laurie Brink, The Heavens Are Telling the Glory of God, which addresses generational differences around new cosmology.

Related: Q & A with Sr. Laurie Brink on the relationship between science and theology

Giving Voice, an organization for younger sisters, shared a vision for a future of religious life that is intercultural, less institutional, a leadership that is circular and mutual. "There is a desire for a mission-driven focus and not one of maintenance."

In the sum of Herb's four conversations in her "cell," she said, "I heard five calls emerging."

1. The call to transformation

"When we are no longer able to change a situation, we are challenged to change ourselves," Herb said, quoting Ted Dunn's book Graced Crossroads. Before the sister leaders is the call for a transformation that is "multidimensional, including personal, interpersonal and organizational. The need for such transformation is here now. This is our work."

2. The call to vulnerability

Herb cites researcher Brené Brown's invitation to think about vulnerability "as the courage to show up when we have no control over the outcome" — a truth that speaks to the very process of religious life's emerging future, Herb said. "Vulnerability is that emotion that emerges during times of uncertainty and risk. As we are anchored in God's love, we need to trust."

The power of vulnerability | Brené Brown

Researcher Brené Brown talks about the power of vulnerability in a 2011 TED Talk. (YouTube/TED)

3. The call to prophetic witness of religious life

The work of contemplative scholars Shawn Copeland and Carmelite Sr. Connie Fitzgerald, Herb said, offered direction as she considered a deeper meaning to being a "prophetic witness." Considering the critical issues facing congregational leaders "we may feel helpless," Herb said. "The dark night of our world can lead us to the experience of impasse, and it is there that there is the opportunity for creative growth and transformation. ... Perhaps it is in the call to contemplation and our commitment to these issues that we can discover anew the prophetic call of religious life today and into the future."

4. The call to synodality within our church

Ahead of the 2023 synod, LCWR held listening sessions that yielded a response sent to Rome, in which the sisters expressed a desire for an inclusive and welcoming church that heeds the cries of the Earth and the marginalized, and seeks to heal a polarized church.

While work within LCWR to address systemic racism and exclusion of LGBTQ communities is a source of encouragement, Herb is simultaneously challenged by the church's inadequate response over the years to these same issues. "Can we find a way to bridge these gaps and remain faithful to the call of the Spirit at this time in history?" Her hope, she said, is that sisters, bishops, and the church at large "will come together with a desire to be in communion and to participate as broadly as possible for the sake of the mission of our church."

Quoting Cardinal Tobin: Just as COVID revealed society's cracks, "the genius of the synodal process is that it will starkly reveal just how little-traveled is the road to the synodal church and how anti-synodal is the culture of a controlling hierarchy with a passive laity."

5. The call to create Mary and Elizabeth encounters

The image of a young and pregnant Mary seeking a wise and pregnant Elizabeth, Herb said, was a powerful image that arose at the International Union of Superiors General assembly. "We need the Marys and Elizabeths on our journey to the future," she said. "Let us create spaces for such encounters."

The message for LCWR members, she concluded, is to "look to the future with both our heads and our hearts," while the future of religious life needs to respond to "the transformation that is happening within us as the changes are happening around us.

"We need to be nimble and to risk as we look to the future," embracing God's mystery as well as diversity and interculturality. "To engage in the divine dance into the future will take courage and a spirit of hope," she said.

Returning to A Mapmaker's Dream, sisters ought to render the future of religious life "in the form you hope it might one day attain, rather than accept anything else," Herb said, quoting the book.

She closed with the words of Immaculate Heart of Mary Sr. Margaret Brennan, a former LCWR president who invited sisters to have "travelers' hearts" in the collection Turning Points in Religious Life:

A temptation for any traveler is to "settle down" and "settle in" — to domesticate the urges and impulses that beckon forward. All persons and groups, and especially institutions, are subject to this subtle temptation in the name of stability and order. Our turning — our readiness to risk the future, it seems to me, is only if we have our traveler's hearts, where waiting is a respite, not a rooting. It is to have a watchful eye on the changing horizon and to know the moment when it is time to say, in the words of Walt Whitman, "We have stood here like trees in the ground long enough. ... Let us sail for open waters where we have passage."

A call to listen to the Spirit: Sisters embrace the church's synodal process

A pope for all people

UISG webinar on advocacy: Walk with, give voice to those on the margins