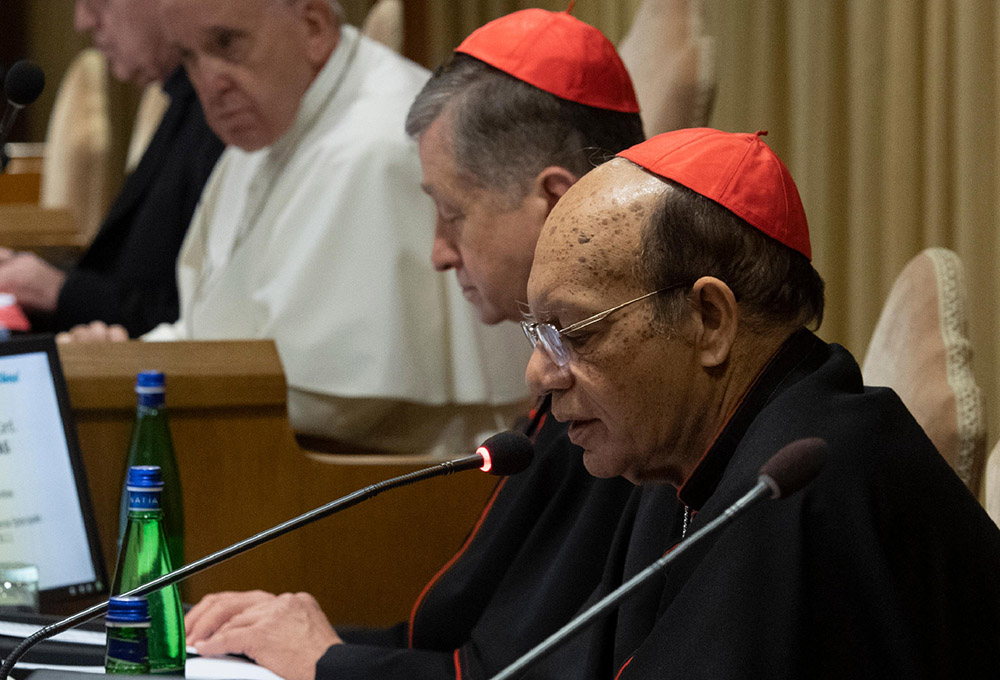 Cardinal Oswald Gracias (foreground) of Mumbai, India, speaks at a Vatican meeting on the protection of minors in the church in February 2019. (CNS/Vatican Media)

The head of India's Catholic religious organization has urged Cardinal Oswald Gracias of Mumbai to reach out to the accuser nun and her supporters in the recently concluded rape case and expressed the solidarity of women religious in India with the nun.

"We would like the Church authorities to at least now, try and reach out to the survivor and her companions and offer support to them in whatever way possible, including financial, spiritual and psychological," said a letter that Apostolic Carmel Sr. Mary Nirmalini wrote to the cardinal, who is the president of the Catholic Bishops' Conference of India.

Nirmalini, the president of the Conference of Religious India, sent the Jan. 20 letter nearly a week after a court in Kerala, southern India, acquitted Bishop Franco Mulakkal of Jalandhar in the historic nun rape case.

Nirmalini also said women religious in India express their solidarity with "the victim survivor and her companions who have walked with the victim with lot of courage, dignity and determination in their fight for justice."

The letter, endorsed by all officials of the Conference of Religious India women section, commends the "prophetic role" of the accuser's supporters, who raised their voice against "an unjust and appalling system, within the Church."

The letter regrets that nobody had paid attention to the accuser when she approached several church authorities before being forced to go public and to the court to seek justice.

"Her companion sisters had the grit to fight the power and might of Bishop Franco. The sisters, with no financial backing or support from the Church, went through their dignity being stripped as women through many ways in which power was being wielded against them," said the letter, which many view as the first response of the Conference of Religious India since the case went to the court.

Related: Bishop Franco Mulakkal acquitted in alleged rapes of a nun in India

Additional District and Sessions Court Judge G. Gopakumar Jan. 14 said the prosecution had failed to prove the charges against the bishop.

The sister in the case, a former superior general of the Missionaries of Jesus, a Jalandhar diocesan congregation, had in June 2018 accused Mulakkal of raping her 13 times between 2014 and 2016.

The court, which heard 39 prosecution and five defense witnesses, dismissed her allegation as unreliable, citing several discrepancies in her statement.

"When it is not feasible to separate truth from falsehood, when grain and chaff are inextricably mixed up, the only available course is to discard the evidence in toto," said Gopakumar in his verdict.

"In the said circumstances, this court is unable to place reliance on the solitary testimony of a rape victim and to hold the accused guilty of the offences charged against him. I accordingly acquit the accused of the offences," the judge added.

Nirmalini, who also heads the Conference of Religious India women section, said she wrote the letter "with a heavy heart as I have been inundated with so many phone calls from both religious men and women as well as lay women from around India" after the verdict.

"The issue here is not that most religious women are completely taken aback with a totally unexpected verdict against the sisters, but a section of the clergy and people have been celebrating the verdict as a victory for the Church," Nirmalini said.

She pointed out that from the beginning of the case, the accuser and her companions were subjected to all kinds of innuendos and insults. Hardly any church authorities supported them, she said.

"How come a bishop who is accused of raping is part of the Church and the victim along with her supporters are not? In our opinion this is shameful. In addition, most of the sisters, including me, express a complete disbelief and shock at the verdict in the said case where sisters have been apparently denied justice."

Similar questions were raised earlier by Sisters in Solidarity, a national forum of Catholic women, both religious and lay.

Nirmalini expressed happiness that the accuser and the prosecution plan to appeal against the verdict in the higher court as they feel that justice has been denied to them.

"Whatever the outcome of their appeal in the higher court, our serious concern now is, if the Church has a forum where religious women who suffer sexual abuse from their bosses, be they priests or bishops, can present their cases and where they would be heard sympathetically."

Nirmalini brought the attention of the cardinal, who is among the top advisers of Pope Francis, to the fact that women religious have no power or jurisdiction in the church, even though they render "incredible service in society and are the face of the Church."

"Where do we go? Should all religious women knock the doors of the court for justice? We really wonder if this will make other women ever step forward or would leave them with no choice but to suffer in silence," the letter says.

A separate, open letter by the Indian Christian Women Movement, an ecumenical group, addressed to the leaders of various churches in the country, was issued on Jan. 23, decrying the verdict and supporting the nun.

"We call on the leadership of the Church to account for their attitude ever since the survivor Sister courageously spoke out about her ordeal," said the letter, issued by Aruna Gnanadason, convener for the national team of the Indian Christian Women's Movement. "The Church did not react as it should have — letters of appeal she sent to the leadership of the Church were ignored; the church remained silent in the face of her humiliation in the court."

The letter seeks further action on behalf of the sister. "We call on the church to set up an independent and impartial enquiry into the circumstances that have led to this outcome in the lower court," said the letter. "We demand justice."