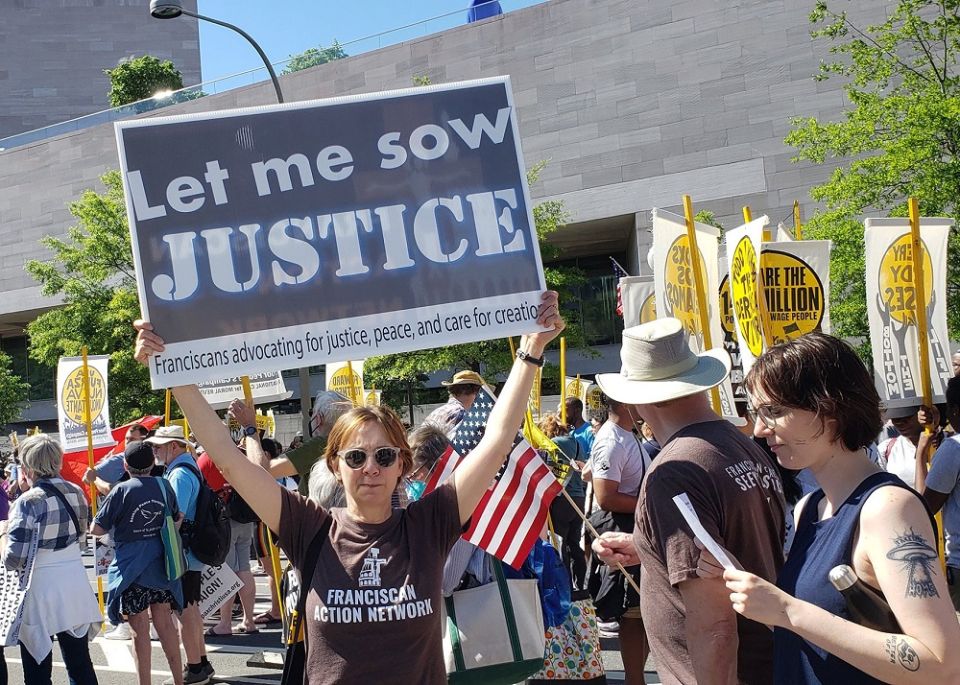 Members of Catholic groups take part in the Moral March on Washington on June 18 sponsored by the Poor People's Campaign. The Catholic contingent was organized by Network, a Catholic social justice lobby; the Leadership Conference of Women; the Sisters of Mercy; Pax Christi USA; the Quixote Center; the Loretto Community; and the Franciscan Action Network. (CNS/Courtesy of Franciscan Action Network)

Washington — Mercy Srs. Joan Serda and Marilyn Graf said they hoped the June 18 Moral March on Washington, organized by the Poor People's Campaign, would get more people "to understand the plight of the poor in our country."

If so, "that will be some achievement," Serda said in an interview posted on her religious community's website before she and Graf left their convent in Mobile, Alabama, to head for the nation's capital.

"Maybe there will be a groundswell and we can make changes," she added. "I'm looking for more enthusiasm for myself as well."

Ahead of the march, Serda and Graf were part of a group of approximately 100 women religious, friars and lay associates as well as many other Catholics who gathered for a brief prayer service on the steps of St. Patrick's Church in downtown Washington before joining the event in front of the U.S. Capitol.

The Catholic contingent was organized by Network, a Catholic social justice lobby; the Leadership Conference of Women; the Sisters of Mercy; Pax Christi USA; the Quixote Center; the Loretto Community; and the Franciscan Action Network.

"The Gospels and Catholic social teaching call us to care about the common good and put the needs of the impoverished and vulnerable first," said Tobias Harkleroad, who is the Franciscan Action Network's director of campaigns. "Our nation is at a moment that calls for unity and solidarity to tackle many problems that conspire to cause great stress and hardship for those in poverty and low-wage jobs."

"It is so important for all of us to look across lines of division to see our common humanity and our common struggles so that we can create solutions for the common good," he said in a statement. "We are proud to unite our voices with the Poor People's Campaign to seek justice together!"

The prayer service included quotes from St. Francis of Assisi, the prophet Micah and the Gospel as well as quotes from a prayer written by Sr. Thea Bowman, a candidate for sainthood. The Franciscan Sister of Perpetual Adoration, who has the title "Servant of God," is one of six Black Catholics up for sainthood.

The service also included a poem written by Amanda Gorman, a young Black Catholic and poet laureate from Los Angeles who read a poem at President Joe Biden's inauguration Jan. 20, 2021.

The Catholic group concluded the prayer service singing, "Make me a channel of your peace."

Then they walked under a "Catholics for Justice" banner and headed toward Pennsylvania Avenue to join a much larger crowd made up of poor people and low-wage workers, the leaders of many faith communities and their members, and union leaders and social justice attorneys.

According to the Poor People's Campaign, tens of thousands of people lined Pennsylvania Avenue and even more watched online as speaker after speaker shared their stories on a broad range of issues: voting rights; the nation's failure to respond to COVID-19, especially among poor communities; workplace rights; the need for health care and living wages; and the day-to-day struggle of not having enough money to survive.

"As long as there are 140 million poor and low-income people in this country, and we know it doesn't have to be this way, we won't be silent anymore," said the Rev. William Barber, who co-chairs the campaign with the Rev. Liz Theoharis.

The Poor People's Campaign: A National Call for Moral Revival, as the organization is formally known, is patterned after the movement the Rev. Martin Luther King Jr. and many others led in 1968 calling for a "revolution of values" in America.

"They sought to build a broad, fusion movement that could unite poor and impacted communities across the country. Today, the Poor People's Campaign: A National Call for Moral Revival has picked up this unfinished work," the campaign's website says.

The Sisters of Mercy "took a strong leadership role in advocating for Catholics to participate in Saturday's events and the sisters were probably the largest contingent among us with sisters coming from all over," Harkleroad told Catholic News Service.

Walking a tightrope to repair our democracy

US nun at Lebanese hospital recalls 'mass of people ... on stretchers'