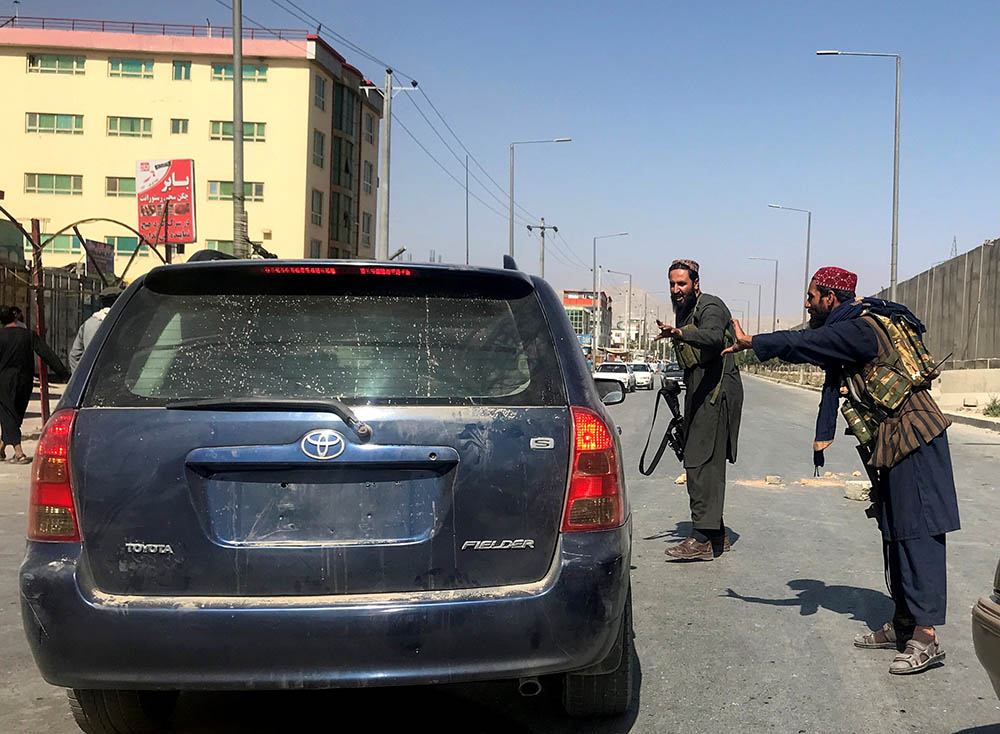 Members of Taliban forces check a vehicle on a street in Kabul, Afghanistan, on Aug. 16. (CNS/Reuters)

Being airlifted out of Kabul, Afghanistan, was a dream come true for Sr. Shahnaz Bhatti following the panic of wondering if it would indeed even be possible. She shared her story a few weeks ago in AsiaNews, an Italian publication of the Pontifical Institute for Foreign Missions. Sister Shahnaz was working at the Pro Bambini di Kabul ("For the Children of Kabul") community when the Taliban took over the country Aug. 15.

I had the privilege of visiting this amazing day school in 2008 and wrote a blog about its mission seven years later, in 2015. Now, things have changed dramatically, and I felt worried, wanting to find out what was happening to the sisters. Did they get out? Were they safe from harm? What will happen to the school if they leave? These were my questions, and I felt frustrated because I no longer had a contact.

I searched for any news, and finally, through the International Union of Superiors General, I received the story from AsiaNews about the sisters who were airlifted from Afghanistan and, later, an Aug. 31 Catholic News Service article.

When I visited Afghanistan in 2008, there were only 12 sisters in the entire country, all serving in Kabul: four Missionary Sisters of Jesus, four Little Sisters of Jesus, and four sisters at Pro Bambini, an intercongregational community of sisters from Pakistan, India and Italy. None of the sisters I visited then were still in Kabul when the Taliban took over again, as they usually serve three or four years and then return home. However, Sister Shahnaz and Maria Bambina Sr. Theresa Crasta were at the school.

It is a heart-wrenching story Sister Shahnaz tells of her wait to be rescued.

According to the AsiaNews story, Sister Shahnaz, a 46-year-old Sister of Charity of St. Joan Antida, an Italian-founded congregation, was back in Italy when interviewed, and although she was safe, she shared: "Even now that I'm here [in Italy] safe and sound, every time I hear a knock at the door or hear the sound of a shutter moving in the wind, my heart leaps and I am terrified that someone has come to get me."

In Kabul, she waited in hope, even as she listened to the chaos and panic of the city; people shouting and running frantically, searching for ways to leave. She talked about being approached often by Afghan friends and acquaintances seeking letters of reference in the name of Pro Bambini, hoping they would provide needed authorization to leave the country. Although she wrote the references, Sister Shahnaz knew they were useless, as all city offices and banks were closed.

Her companion, Sister Theresa, was fortunate to be evacuated from the country with an Indian mission delegation Aug. 23. However, Sister Shahnaz, although she too had opportunities to leave, decided to remain with Barnabite Fr. Giovanni Scalese, the head of the one Catholic parish in Afghanistan, until other members of the community who depended on them, especially the orphaned children, could also leave.

The parish, the Chapel of Our Lady of Divine Providence in the Italian embassy, was established as a formal mission in 2002 by Pope John Paul II, Catholic News Service reported. The chapel had been there since 1921 under a treaty between Italy and Afghanistan. It was staffed by Italian priests and withstood the first Taliban rule; hopefully, it will withstand this current reign.

Father Giovanni told Catholic News Service that the parish's mission, according to the treaty, has always been limited to charitable and humanitarian activities and serves only non-Afghans because under the state religion of Islam, Afghans' "conversion to other religions is a crime of apostasy."

Four Missionaries of Charity and 14 orphaned children and young adults with disabilities all sought safety with Sister Shahnaz when their house was under attack. Everyone was frightened as people knocked on the door or gate.

"We hid, even though we were aware that if they broke down the door we would not be saved," she told AsiaNews.

"No agency felt like taking the responsibility of accompanying us to the airport because security could not be guaranteed," she said. "We made contact with various organizations, from NATO to Catholic Relief Services, from UNAMA [the United Nations Assistance Mission in Afghanistan] to the Red Cross: on several occasions it seemed that the transfer was imminent, but every time, at the last moment, we received a phone call telling us that the conditions did not allow us to move."

Finally, one evening, unexpectedly and after much anxiety from waiting, Father Giovanni phoned with the message that the sisters were to be ready to leave that night. The sisters and the 14 children and young adults were indeed ready at 9:30 p.m., when "a bus arrived in front of our gate accompanied by a police car, Father Scalese and Alberto Cairo of the Red Cross."

Sister Shahnaz described the fearful, harrowing journey to the airport as they passed by people running in panic, also hoping to get to the airport. All the while, the Taliban were firing madly into the air. One person they saw was hit and fell right in front of their car.

"Finally arriving at the main gate, we managed to get through the fundamentalist checkpoints and made our way to safety," she said. "We later learned that the same police that escorted us were Taliban."

Although Sister Shahnaz and the others are now in Italy, she is fearful for the children and families left behind facing so much uncertainty and danger of retaliation. She is also grieving for the girls she had worked with, "who send me tearful messages asking for help," and the parents who fear the Taliban will take their children away to be trained as soldiers.

Even though she cannot return to the country she had grown to love, Sister Shahnaz plans to continue her commitment to Afghan families who are in Italy as refugees.

Read this next: Q&A with Sr. Theresa Crasta, who worked with special needs children before evacuating Kabul