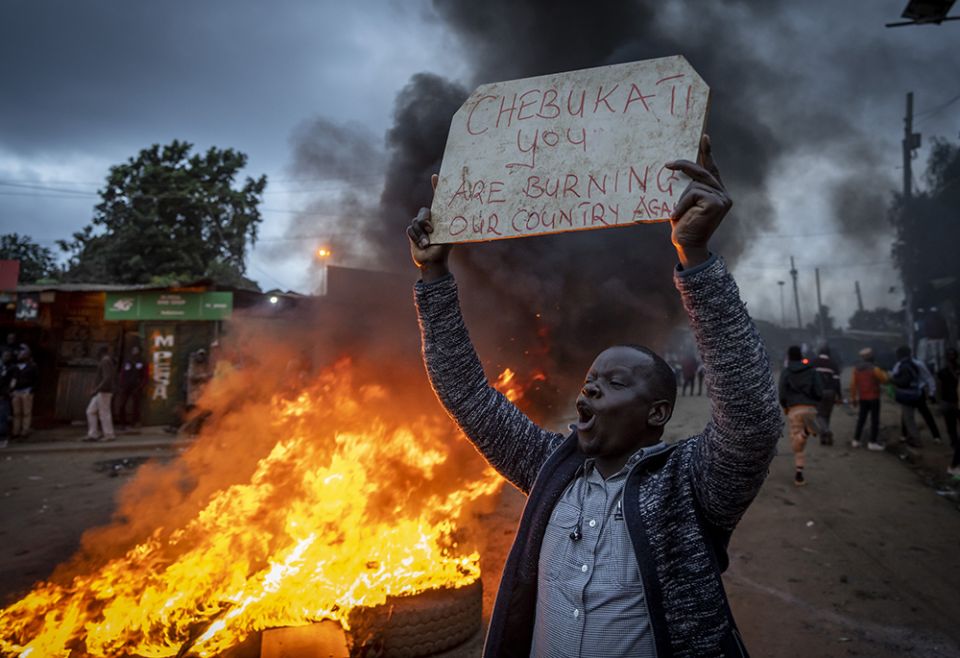 A supporter of presidential candidate Raila Odinga holds a placard referring to electoral commission chairman Wafula Chebukati, while shouting "No Raila, no peace", next to a roadblock of burning tires Aug. 15 in Nairobi, Kenya. Nearly a week after Kenyans cast their vote on Aug. 9, William Ruto was declared the country's fifth president. (AP photo/Ben Curtis)

ELDORET, Kenya — Ecstatic supporters of President-elect William Ruto filled the streets of this city in western Kenya to celebrate his victory, after the country's electoral commission declared Ruto the winner of the presidential elections, Aug. 15.

"I am thrilled today," said activist Brian Koech, as he waved Ruto's portrait and chanted songs and slogans in Eldoret, the stronghold of the president-elect. "I can't believe Ruto won this election. We know he will transform our country's economy and improve our lives. He has a good vision for this country, especially for the youths."

But some 56 miles away, violence erupted with accusations of vote-rigging in Kisumu — the political bastion of Ruto's opponent, Raila Odinga — after Odinga lost his fifth bid for Kenya's presidency in 25 years. The angry supporters cried and screamed, barricading roads and streets, and lighting bonfires, prompting police tear gas.

“We have waited for years to bring the leadership home after a number of failed attempts," said Millicent Onyango, a trader in Kisumu, amid screams from other Odinga supporters. "Having Odinga as the president would have been a major gain for us." 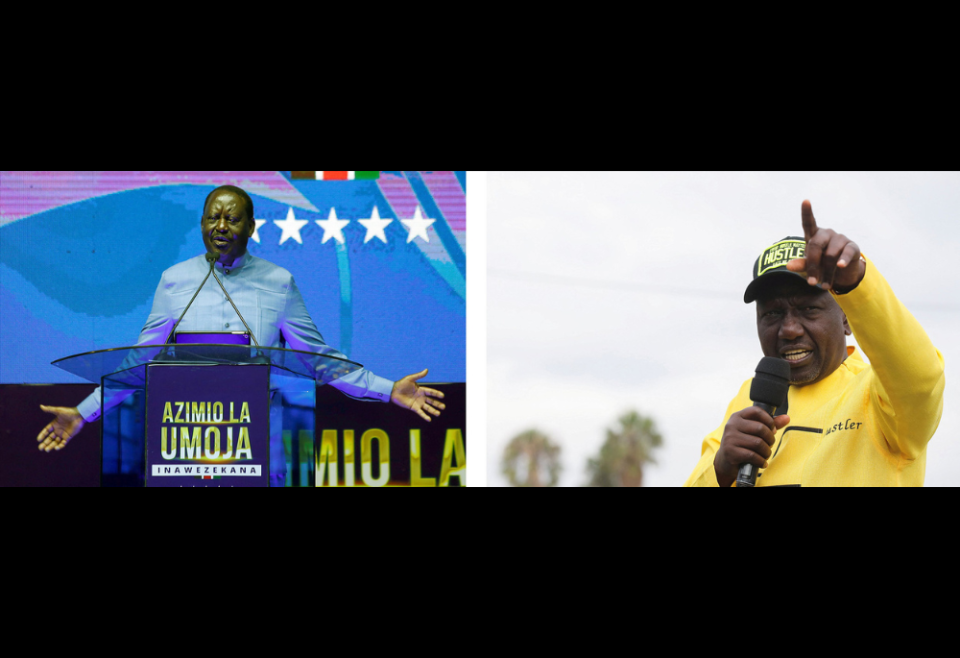 Ruto, Kenya's deputy president who ran under the United Democratic Alliance party, has been campaigning on the platform of empowering poor Kenyans through the bottom-up economic model. Odinga, contesting under a coalition political party, the Azimio-One Kenya Alliance, campaigned on the promise to fight corruption and ensure Kenyans get value for their taxes.

Ruto's win became controversial after four commissioners of the seven-member electoral body disowned the results, citing irregularities. In order to prevent the chairman of the electoral body from announcing Ruto's victory, turmoil erupted inside the main tallying center, injuring several people, including three electoral officials. Ruto, however, was finally declared the winner with 50.5% of the vote (more than 7.1 million votes), while Odinga received 48.85% (roughly 6.9 million).

Chaos broke out in various parts of the country following the announcement of his victory, prompting religious leaders to urge residents immediately to maintain peace as the country waits for further instruction.

"We send peace to Kenyans, our president-elect and candidates that lost the vote count," Archbishop Anthony Muheria, of the Archdiocese of Nyeri, told journalists. He appealed to politicians to maintain peace, stop inciting their supporters, and pursue disputes through the legal system. 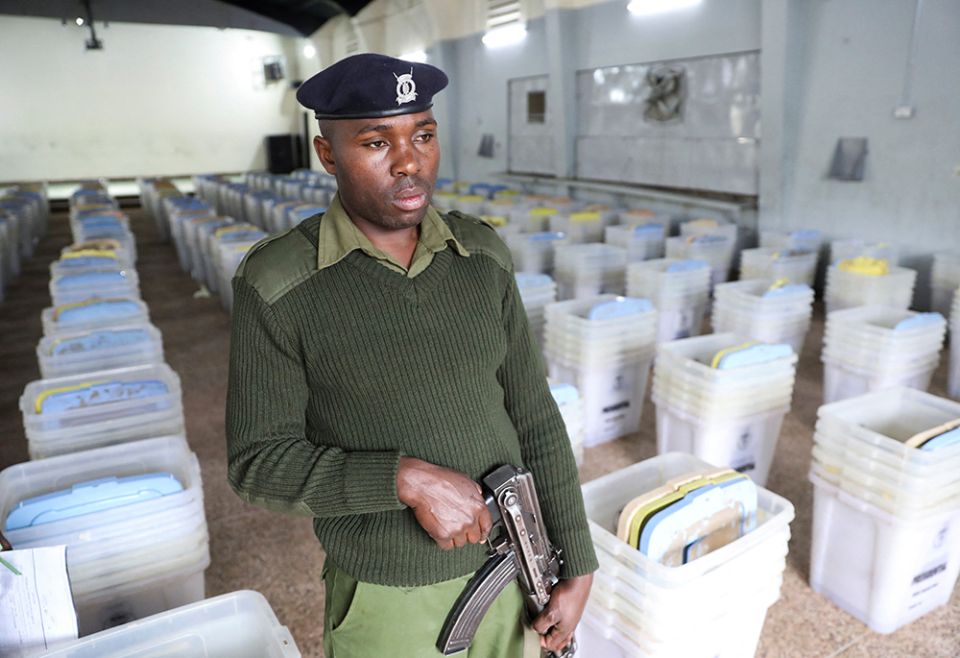 Sr. Anne Onyancha, a member of the Sisters of Mary of Kakamega, said she understands that this was a tight race between Odinga and Ruto. However, she urged Kenyans not to attack their neighbors and friends because of politics.

"We now just pray for peace that each competing side becomes tolerant of one another and maintains peace." she said. "Both candidates invested a lot in this election, and therefore losing it can be disappointing to others, but we urge that if there is a doubt, then the courts should advise us."

The U.S. embassy in Kenya raised concerns about the country's ongoing violent protests and called on all parties to resolve their differences peacefully and through the courts. It also noted that leaders must encourage their supporters to "remain peaceful and refrain from violence during the electoral process."

"Going forward, we urge all parties to work together to peacefully resolve any remaining concerns about this election through existing dispute resolution mechanisms," the embassy said in a statement.

Sr. Lucia Simba is worried that the sporadic violence in response to the claims of a rigged election could lead to a new outbreak of violence nationwide.

With every five-year cycle, the East African nation of more than 50 million people has experienced varying levels of ethno-political violence following presidential elections since Kenya’s independence in 1963. The worst came with the 2007 presidential election, during which 1,300 people died and nearly 600,000 were displaced.

"God is the one who gives leaders, and whoever he gives us, we are grateful," said Simba, a member of the Dimesse sisters. "But for now, we just want a peaceful country. I want to urge supporters of Odinga and Ruto not to attack each other and shed innocent blood. We are brothers and sisters and need each other despite our political differences."

Related: After weeks of encouraging peace, Kenyan sisters cast their votes for a new president

Sr. Celestine Nasiali, a member of the Oblates of the Assumption, urged Kenyans to keep the peace for the sake of the country, already experiencing an economic downturn due to COVID-19 and the ongoing war between Russia and Ukraine, which has contributed to rising of oil prices and restricted wheat exports.

"I have mixed feelings about this election," she said. "The competition was very tight and unpredictable. There was a lot of anxiety, but finally, it ended. My prayer is that people accept the results and let peace reign."

Odinga's supporters, however, disagree, as they implore their candidate not to accept the results and to instead give them directions on how to respond to this perceived injustice.

"It was evident that the results were biased after we saw the differences between the electoral commission officials when preparing to announce the results," said Bonface Osano, a student at Maseno University in Kisumu. "Odinga should reject the poll results and move to court to challenge the outcome."