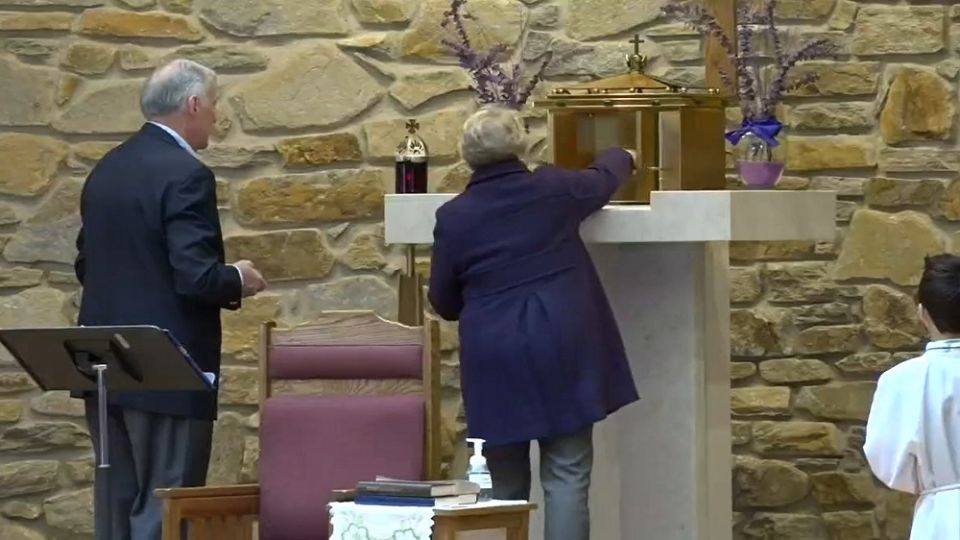 Extraordinary ministers of the Eucharist at St. John the Evangelist Church in Hydes, Maryland, repose the Eucharist in a donated tabernacle during Mass on April 3. (CNS/Catholic Review/Priscila González de Doran)

Hydes, Maryland — Days after a tabernacle containing the Eucharist was stolen from a parish near Baltimore, parishioners received some good news when the Sisters of Notre Dame de Namur donated one of their tabernacles to the grieving faith community.

The replacement tabernacle arrived at St. John the Evangelist Church in Hydes a few hours after the parish celebrated a rededication Mass and Holy Hour of Reparation on April 1.

Fr. Pete Literal, pastor, told the Catholic Review, news outlet of the Archdiocese of Baltimore, that parishioners are saddened by the theft of the tabernacle and Eucharist, which is believed to have taken place March 25. The day was not only the feast of the Annunciation of the Lord and the day on which Pope Francis consecrated Russia and Ukraine to the Mary, but also Literal's 70th birthday.

Fr. Ross Conklin, associate pastor, discovered the tabernacle was missing when he was preparing for morning Mass on March 26.

"They took the tabernacle, and in it, I know we had two ciboriums, one luna and another little ciborium for gluten-free [hosts]," Literal said. "The most devastating part is that the tabernacle had the Eucharist in it, and we don't know where it is."

A ciborium is a goblet-shaped vessel with a cover that contains the consecrated hosts; a luna is a round receptacle that holds the sacred host upright in a monstrance to allow the Eucharist to be visible for adoration.

Also missing were six gold-plated candle holders, four candelabras and the base for the processional cross. The items are estimated to be worth more than $20,000.

"All these items that were stolen could be replaced," Literal said, "but disrespecting the Eucharist is imponderable."

The Sisters of Notre Dame de Namur entered the picture through the intervention of Doug Johnson, capital projects manager for the Archdiocese of Baltimore. After reading about the stolen tabernacle in the Catholic Review's e-newsletter, Johnson connected Literal with Joe Salkeld, facility manager at the now-closed Villa Julie Residence in Greenspring Valley, Maryland.

Villa Julie is a former retirement community and provincial office for the religious order. Johnson was assisting the sisters in finding new homes for religious artifacts as the religious community prepares to sell the property.

"After 20 years working on designs and construction projects for the archdiocese, something like this is a no-brainer," Johnson said. "When something seems really obvious, then it really should happen."

The three were surprised to find out how similar the Villa Julie tabernacle was to the stolen one. The measurements were exact, and both had a golden appearance and were from the early 1960s.

"They are contemporary with each other," Johnson said. "It was meant to be."

Blair picked up the tabernacle from Villa Julie Residence and brought it to its new permanent home.

"The Sisters of Notre Dame de Namur were actually going to donate the tabernacle to St. Mark in Catonsville," Blair said, "but [St. Mark Parish] were gracious enough to say, 'No, give it to St. John; they need it.' "

"It's a perfect fit," Blair added.

There are no suspects in the theft, and Literal thinks the motive for the theft was monetary.

Notre Dame de Namur Sr. Patricia Loome, who oversees the Greenspring Valley property from the religious community's Ohio province office, said the sisters were happy to donate their tabernacle to the parish.

"Wouldn't that be a great place for our tabernacle to go and continue its life in a parish with people?" she said.