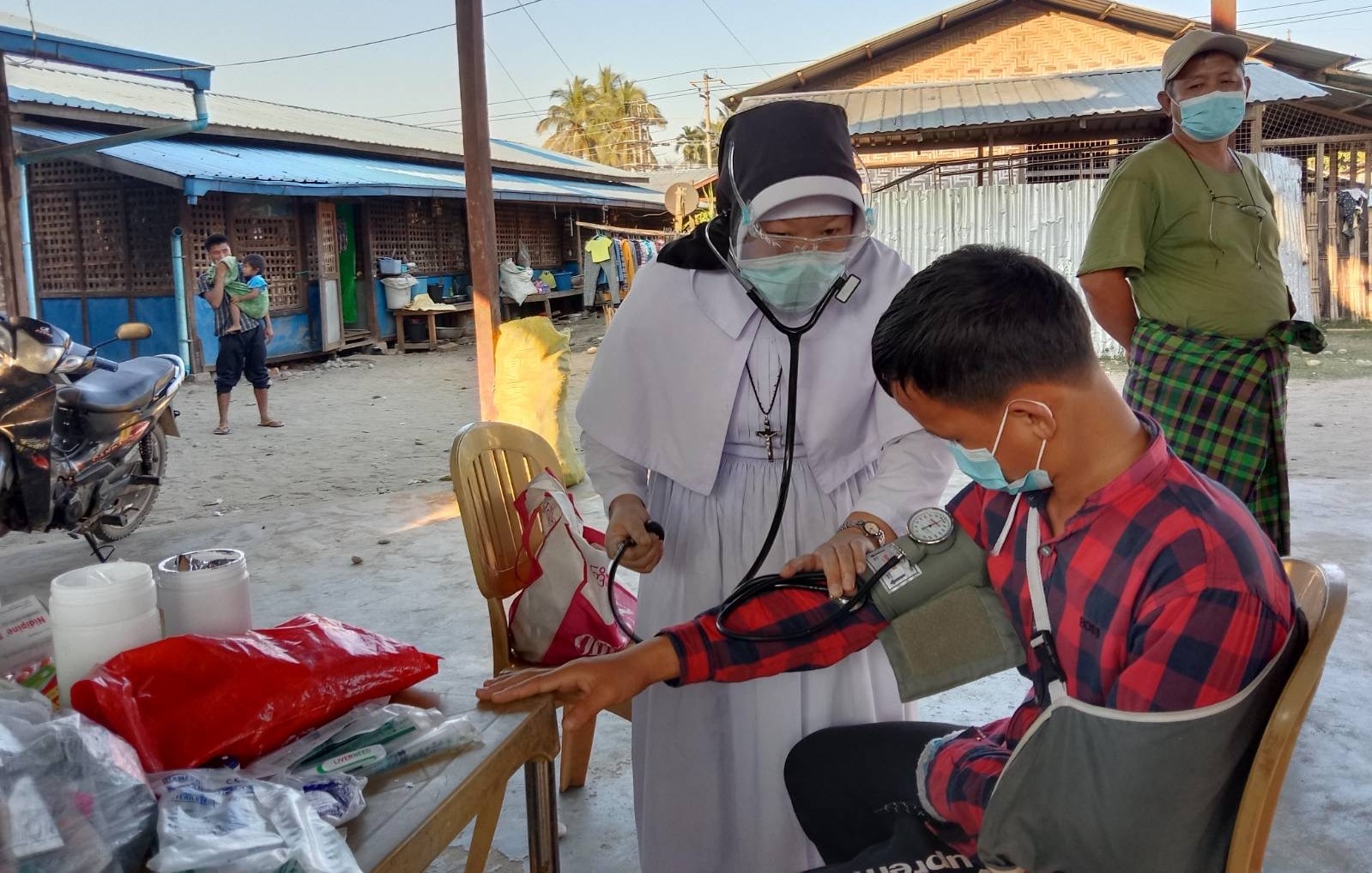 Sr. Ann Rose Nu Tawng checks the blood pressure of a man at a camp for internally displaced people near Myitkyina, the capital city of Kachin state, on Feb.19. (Provided photo)

"I cry in despair for people in Myanmar who are facing the brutality of the military and ask God why innocent civilians continue to be killed," Nu Tawng said.

She sympathizes with those who are displaced, facing hunger and in urgent need of shelter.

"Whenever I have a meal, I remember displaced people and other needy people as I wonder how they can survive their daily lives and whether they have enough food, whether they have proper shelter," the nun from the Sisters of St. Francis Xavier congregation told UCA News. 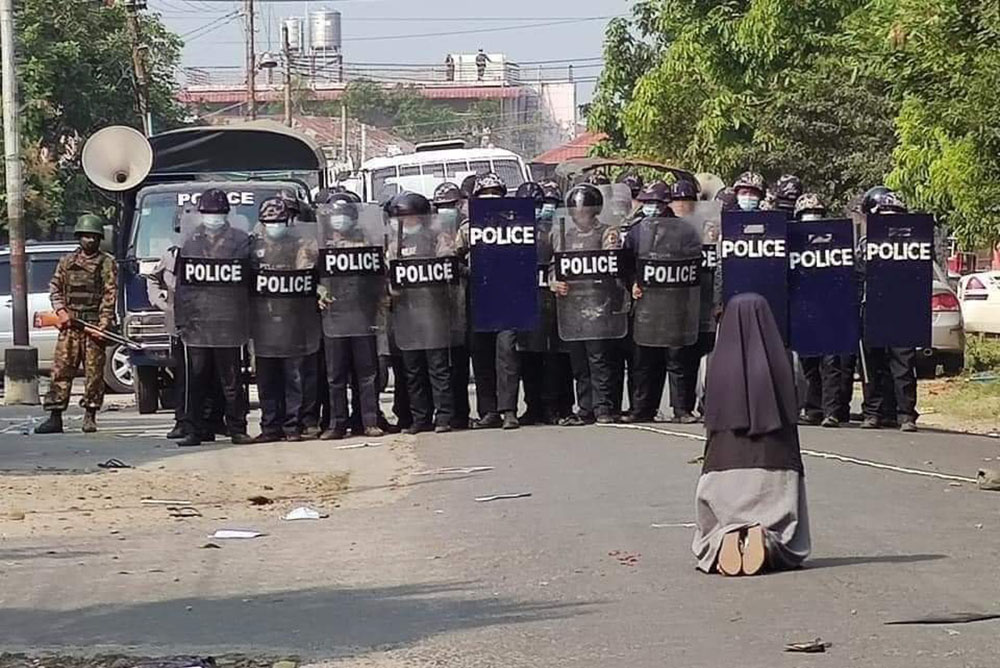 On Feb. 28, 2021, in an image that resonated around the world, Nu Tawng was seen kneeling in front of police officers in Kachin state pleading with them not to shoot young protesters seeking refuge in the clinic where she worked after the country was rocked by public unrest against the coup.

"I feel shocked and surprised when I reflect and look at the photos as God gave me courage to make a stand against security officials. God used me to protect the young protesters from being shot," she said.

The nun didn't even realize her photo had gone viral on social media and made headlines around the world as she was rushing to send an emergency patient to a hospital that evening.

"My superiors and colleagues worried so much about my life, so they asked me how I did it. My mother was also deeply worried about such a risk and told me not to do it again as she can't lose her daughter's life," Nu Tawng recalled.

The 46-year-old Kachin nun repeated her brave act in early March 2021 when there were further tensions between security officials and pro-democracy protesters in Myitkyina, capital of Kachin state, that led to two people being killed and several others wounded. She said security officials warned her to leave and asked her, "Do you want to die?"

"If I didn't kneel, many protesters might have been killed as security officials were chasing them down and shooting them," the nun said. 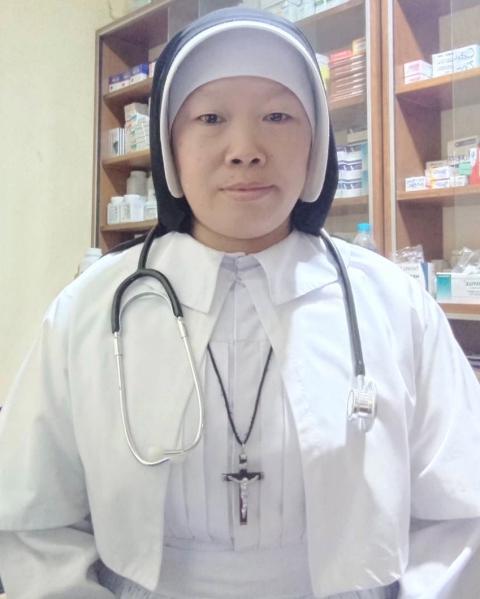 Sr. Ann Rose Nu Tawng at a church-run clinic where she works in Myitkyina, the capital city of Kachin state, Myanmar (Provided photo)

She experienced ill-treatment by the military when she and her fellow Catholic villagers in Shan state were forced to flee to safe areas after the military threatened to burn her village when she was 10 years old.

"The memory of my childhood still haunts me as we were forced to run and hide whenever the troops came into the village. I feel scared whenever I see uniformed soldiers," she said.

Coming from a large Catholic family with a catechist father and a retired teacher mother, she didn't want future generations to be traumatized by the military's brutal acts. "I am very concerned children may have the trauma in their minds like my childhood experience."

Nu Tawng inspired people around the world with her fearless acts of standing between security personnel and unarmed young protesters during the crackdowns.

Her courageous acts also gained the attention of Pope Francis, who prayed in March saying, "I, too, kneel on the streets of Myanmar and say, 'Stop the violence.' I, too, spread wide my arms and say, 'Make way for dialogue.' "

Despite being hailed as a peace icon with global headlines, she has paid a price for her public stand against the junta. The clinic where she works has been raided at least four times by security officials who took records of patients, checked her phone and even took photos of her.

"The local authorities contacted me and warned me to avoid such acts," the nun said, adding that she is accompanied by someone whenever she goes outside amid a lack of personal freedom.

The brave nun, however, continues her mission of caring for patients, pregnant mothers and newborns at the clinic while she reaches out to nearby villages and IDP (internally displaced person) camps to check the health of people.

Nu Tawng, who has served in Myitkyina Diocese since 2010, didn't take a rest even though she was infected with COVID-19 when the country faced a third coronavirus wave in August as she needed to attend to patients.

"It's my personal motto that we need to do something for the people when we are living today as tomorrow is uncertain and we could die then," the nun said.

Despite the challenges and hardships, she hasn't lost hope for change in her country while she called for unity and solidarity among all people from various religious and ethnicities.

"I hope we may reach our goal of building a federal democracy if we all, including religious leaders, make an effort. We need more prayers and more deep faith in God," she said.

Read this next: Heroic sister confronts violence in Myanmar