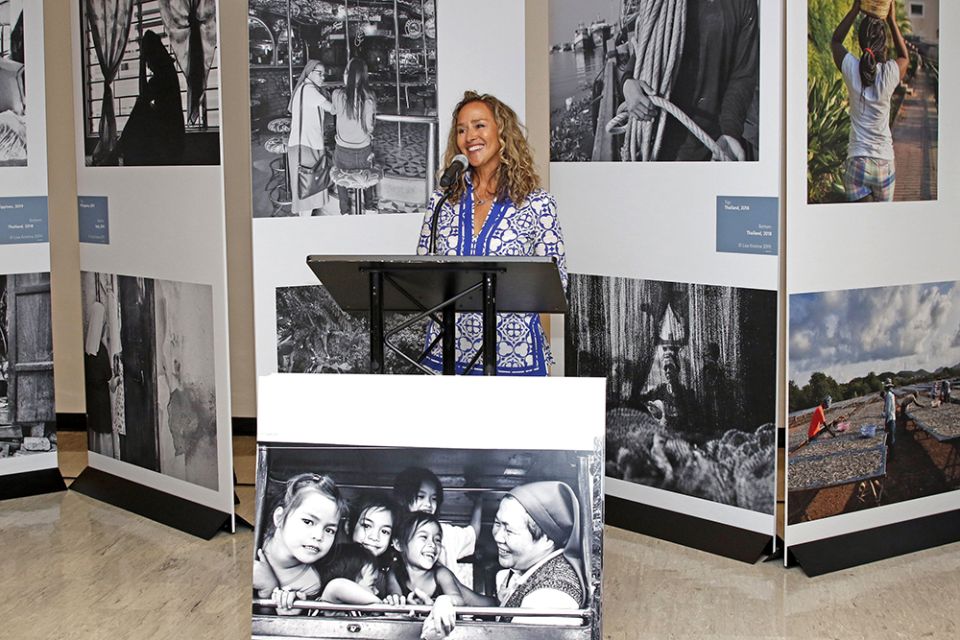 Photographer Lisa Kristine speaks at the July 29, 2019, opening of the "Nuns Healing Hearts" photo exhibition at the United Nations. (CNS/Gregory A. Shemitz)

Rome — The global network of women religious fighting human trafficking was offering a virtual tour of its work helping survivors as a way to mark the World Day Against Trafficking in Persons.

The Talitha Kum anti-trafficking network will make the "Nuns Healing Hearts" photo exhibition available online on its website starting July 30, the day the United Nations has dedicated to raising awareness about the battle against human trafficking.

The exhibit of more than two dozen images, taken by U.S. photographer Lisa Kristine, illustrates the stories of women and men once ensnared by traffickers and the nuns working alongside them, dedicated to their healing and also working in vulnerable communities, seeking to prevent new victims.

The photos were to be accompanied by testimonials and seven short videos on human trafficking.

Comboni Sr. Gabriella Bottani, international coordinator of Talitha Kum, said in a July 29 news release the network wanted to "extend its presence in the virtual space to tell the story of our experience with people injured by trafficking and to do so with respect and care."

The theme chosen by the United Nations for the world day is "The use and abuse of technology," which draws attention to the ways traffickers are also recruiting victims, exploiting them and offering their services online.

Bottani said they wanted to use these same online tools for good, by giving voice to victims and raising "awareness about this violent reality that infringes human dignity."

"We hope that many people will visit [the online exhibit] and use it as a tool for prevention and awareness-raising," she said.

The network also was asking people to use social media to share the virtual tour, "post a story regarding the care against human trafficking," and use the hashtags: #ThePowerofCare, #TalithaKum, #CareAgainstTrafficking.

Kristine spent 18 months "on the front lines" in Thailand, Italy, Guatemala, Mexico and the United States documenting the work of the sisters of the Talitha Kum network. The show then went on tour, stopping at U.N. headquarters in New York, Tokyo and Rome. The virtual tour is supported by the Galileo Foundation, the Global Solidarity Fund and the International Union of Superiors General.

The "Nuns Healing Hearts" exhibition was first inaugurated at the Vatican with Pope Francis in 2019 to celebrate the 10-year anniversary of Talitha Kum, which coordinates 55 networks in 92 countries around the world.

Through the work of the women and men religious and lay experts, the network reached 336,958 people in 2021. Of these, 258,549 benefited from prevention activities, 19,993 were victims and survivors supported by the network and 58,416 people participated in networking, training and capacity-building activities.

Read this next: Talitha Kum, Galileo Foundation back photo exhibit of anti-trafficking ministry