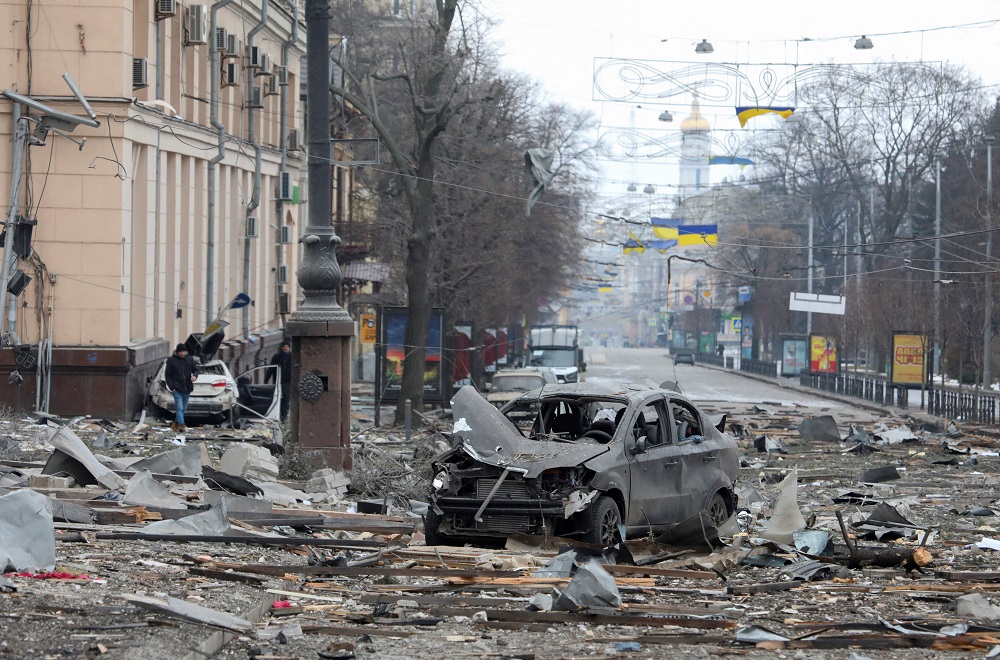 A view of central Kharkiv, Ukraine, shows the area near the regional administration building March 1. City officials said the building was hit by a Russian missile attack. (CNS/Reuters/Vyacheslav Madiyevskyy)

Editor's note: This story was originally published on Matters India, a news portal that collaborates with Global Sisters Report and focuses on religious and social issues.

"We hear stories of such atrocities almost daily, and we too live in fear and anxiety," says Sr. Ligi Payyappilly, who shelters around 75 women and children plus 50 elderly people at her convent at Mukachevo in western Ukraine.

The 48-year-old superior of the Sisters of St. Joseph of St.-Marc convent says the Russian soldiers have now started attacking camps and government shelter homes for refugees, besides residential homes.

"They want food and sex, and they are hungry, angry and frustrated," Payyappilly told Matters India on April 7.

The nun, who came to limelight when she helped overseas students escape to neighboring countries, said the Russian soldiers, who have exhausted their food stock, have no hope of returning home.

"They have started acting crazy," she added.

According to the Washington Post, an estimated 15,000 Russian troops have been killed, three times more are either wounded or taken prisoner in Ukraine — an estimate from NATO, based on the assumption that for every soldier killed, three are wounded.

As the Russian invasion entered the 41st day on April 6, human casualties remained high for Russians whereas Ukrainians have suffered huge infrastructure loss. The Russians in the invaded land are now attacking civilians, according to Payyappilly, now a Ukrainian citizen.

When the war started Feb. 24, Mukachevo and other places in western Ukraine were safe. However, the Russians have now started attacking the western region.

"The sounds of blasts, missiles and rockets have come down, but we hear the cries of the civilians from their homes," Payyappilly said. She said the Russians first targeted government buildings, business establishments and infrastructure.

"But now, people are their target," she added.

Narrating stories of burglary and rape, the nuns said the soldiers entered a home in Kharkiv and raped a 27-year-old woman for three days before killing her in front of her 6-year-old boy. They also shot and killed the rape victim's mother.

She said the Ukrainian women refugees sheltered in her convent narrate such stories. They are in touch with their husbands and relatives in the war-affected areas. The Ukrainian national TV also telecast "such horrible stories" daily, she said.

In another incident, naked dead bodies of six young women were found under a heap of used tires, indicating they were sexually assaulted before being killed.

Based on the national TV reports, Payyappilly said the Russians have gone on a massive civilian hunt from April 2 killing hundreds of young Ukrainians in Kharkiv and Mariupol and the streets are piled up with dead bodies.

"Most of them were young men who had stayed back in their country to fight the war," she said.

Meanwhile, the sisters in the convent have stopped going out as missile attacks on western Ukraine have increased.

"We spend our time in prayer and taking care of the inmates," she said.

The nun said no one in Ukraine sleeps peacefully and "no one, including us, is safe." She said the Russian military has even attacked humanitarian workers involved in supplying food and water, managing old age homes, and shelter homes.

Some Ukrainian homes have only women, children and the aged. "They shoot the old and rape the young," said the sister citing many examples.

Two days ago, the Russian soldiers entered Bucha village and killed everyone there. Quoting the Ukrainian media, Payyappilly said at least 2,000 people were killed in that village, and more than 410 bodies have been recovered.

However, Payyappilly and her 17 companions support their president Volodymyr Zelensky, who leads his people from front.

"He addresses Ukrainians twice a day on national TV and he knows the pulse of the people," she said.

"Once, Zelensky asked people if the country should surrender to Russia to end the bloodshed, but they did not allow him," she said.

Volodymyr Zelensky, a former actor and comedian, is the sixth president of Ukraine. He was initially criticized for dragging his people to a resisting mode, causing immense damage to the country. But now, he is widely praised for his valor and commitment to his people.

"We love him and everyone does so," Payyappilly said. Fourteen of the 17 nuns in her convent are native Ukrainians. The other three, including Payyappilly, are Indian.

Over 13 commandos of the Russian army were killed in action and there have been reports that Russian troops are also in a chaotic condition.

An Indian newspaper reported that several Russian soldiers have died of food poisoning in Ukraine after eating looted food that was poisoned.

The Ukrainian streets are filled with dead bodies of both Russians and Ukrainians.

"We have never experienced such a miserable situation in Ukraine," said Payyappilly, who came to the country from India's Kerala state almost 20 years ago.

She observed that people fleeing to neighboring countries have almost stopped and some have started coming back to fight for the country.