For religious, God's love is worth more than any earthly good, pope says 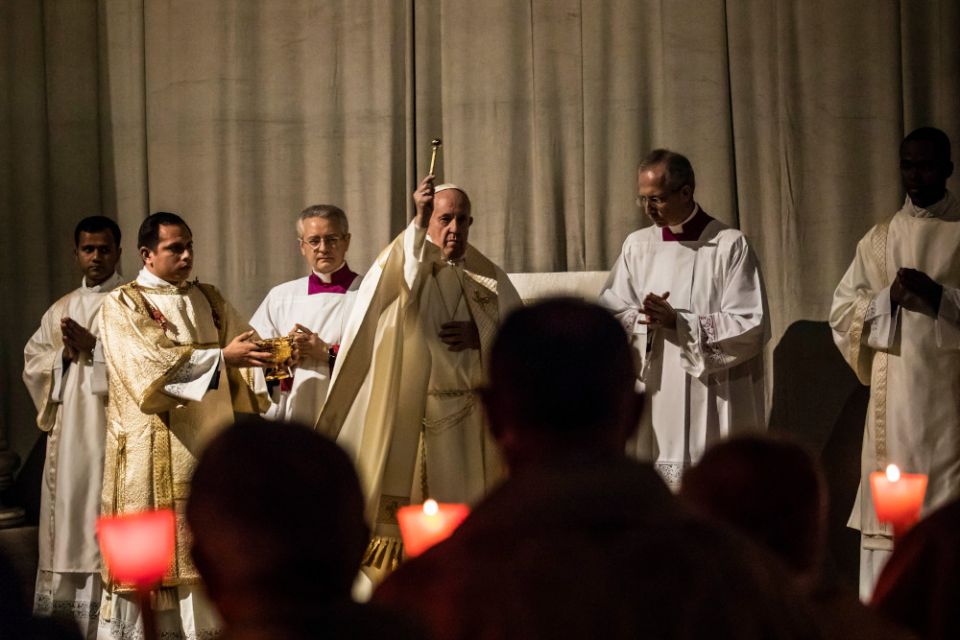 Pope Francis uses holy water as he celebrates a Mass marking the World Day for Consecrated Life in St. Peter's Basilica at the Vatican Feb. 1, 2020. The Mass was celebrated on the vigil of the feast of the Presentation of the Lord. (CNS/Stefano Dal Pozzolo, pool)

Vatican City — When one is totally in love with the Lord, then poverty, chastity and obedience are not sacrifices, but vehicles of freedom, Pope Francis told consecrated men and women.

Celebrating the World Day for Consecrated Life, Pope Francis urged women and men religious to be people of hope, and he asked all Catholics to pray for the hundreds of thousands of women and men who continue to consecrate their lives totally to serving God and their brothers and sisters.

Led by candle-bearing men and women from a variety of religious orders, Francis processed into a darkened St. Peter's Basilica Feb. 1 for a vigil celebration of Candlemas — the feast of the Presentation of the Lord — and the Vatican celebration of the World Day for Consecrated Life.

And, on the feast day itself, Feb. 2, he spoke about how every member of the church has a role to play in sharing the good news of salvation in Christ.

After reciting the Angelus prayer on the feast day, he asked people in St. Peter's Square to join him in praying a Hail Mary for "the consecrated men and women who do so much work, so often hidden."

In his homily at the Mass with religious the evening before, Francis focused on the figures of Simeon and Anna, who were present in the Temple when Mary and Joseph brought the baby Jesus. Simeon and Anna, who dedicated their lives to prayer, recognized Jesus as the Messiah.

Simeon says that he can die in peace because he had seen "the grace that was worth more than life," the pope said.

Religious men and women and consecrated virgins also "caught sight of the treasure worth more than any worldly good," Francis said. "And so, you left behind precious things such as possessions, such as making a family for yourselves."

"You fell in love with Jesus, you saw everything in him, and enraptured by his gaze, you left the rest behind. Religious life is this vision," he said.

A key to perseverance and joy in religious life is to be always aware of the presence of God's grace, the pope told the religious. "The tempter, the devil, focuses on our 'poverty,' our empty hands," the things one did not achieve, the lack of recognition and the struggles one has had.

A temptation that every Christian, including religious, experiences is that of seeing life in a "worldly way" rather than focusing on God's grace at work. When that happens, the pope said, people go off "in search of something to substitute for it: a bit of fame, a consoling affection, finally getting to do what I want."

Focus on God's enduring love is the only antidote, the pope said. "If consecrated life remains steadfast in love for the Lord, it perceives beauty. It sees that poverty is not some colossal effort, but rather a higher freedom that God gives to us and others as real wealth. It sees that chastity is not austere sterility, but the way to love without possessing. It sees that obedience is not a discipline, but is victory over our own chaos, in the way of Jesus."

Simeon was able to recognize the Messiah because he had been looking for him, the pope said. He never lost hope.

"Looking around, it is easy to lose hope: things that don’t work, the decline in vocations," the pope said, but a life devoid of hope is a worldly one, not one focused on Jesus and trust in God's love and fidelity.

"We become blind if we do not look to the Lord every day, if we do not adore him," the pope told the religious. "Adore the Lord."

News | For religious, God's love is worth more than any earthly good, pope says