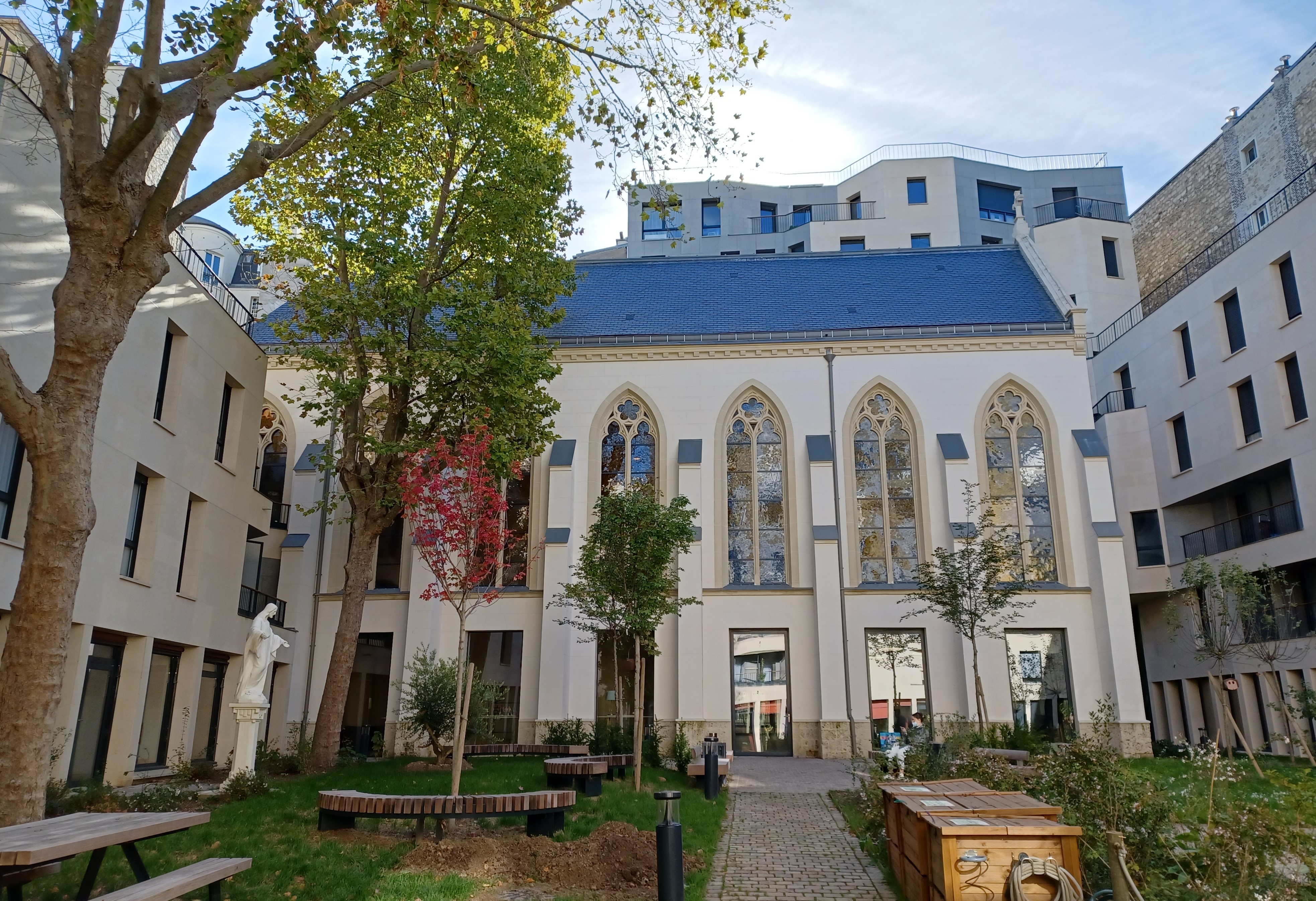 The Dominican Sisters of the Presentation took a proactive approach to how to use their Paris property as their membership dwindled. Pictured here is their Maison St.-Charles in the 15th Arrondissement, a facility that houses sisters as well as people who need low-cost housing, a co-working space, three meeting rooms for rent and 15 guest rooms. (Elisabeth Auvillain)

One by one, the 20 sisters who live in the Maison St.-Charles in the 15th Arrondissement walk to the dining room where they will share lunch. Sister Dominique, who has been working in the garden, takes off her dirty shoes. They sit around small tables in the new house they moved to recently.

The sisters live in small new apartments on the right-hand side of the yard. The building, with its square shape, still looks like a cloister. People who benefit from social housing — single parents and their children and students — live in apartments mostly on the other side of the yard.

The Dominican Sisters of Charity of the Presentation of the Blessed Virgin, usually referred to as Dominican Sisters of the Presentation, is a congregation founded in 1697 in France. They bought a property in 1870 in a place that had just become part of the city of Paris in 1859, like a lot of religious institutes did for cheap in the 18th and 19th centuries to build their convents and schools.

Now, things are different: There are fewer and fewer religious men and women, and congregations have been selling these properties. The sales bring a lot of money, since the properties usually are in nice areas of the capital, in the center or the western part of Paris. The Maison St.-Charles, for example, is in a lively neighborhood where families enjoy good schools, shops and services. 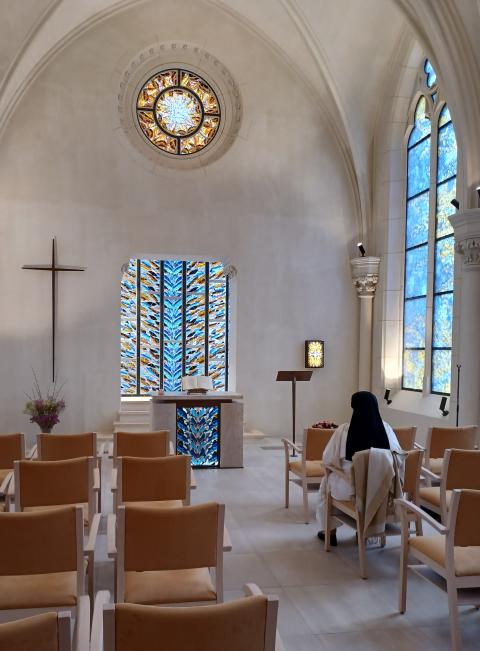 A sister prays in the Maison St.-Charles chapel, where sisters meet for 6:30 p.m. vespers before dinner. They also have a community room on the third floor with a view over the chapel's tabernacle. (Elisabeth Auvillain)

Instead of waiting until the last minute, the Dominican Sisters of the Presentation had other plans.

"Usually, aging congregations of women religious wait until there is no other choice than to sell their property. We made another decision. We were eager to ensure the perennity of our vocation," Sr. Véronique Margron, prioress of the Dominican Sisters of the Presentation and president of the Conference of Men and Women Religious in France, told Global Sisters Report.

"We wanted to create something useful, strong, lasting and beautiful that was in accordance with our vocation of hospitality and solidarity, the values of our congregation, [and] a place of spirituality, too."

Margron said Fr. Joseph-Charles Bayle bought the property in 1862 to house an orphanage that was larger than the one the congregation ran on Rue Notre Dame des Champs, closer to the center of Paris, which "had become too small to welcome children."

After taking ownership in 1870, the sisters built a primary school surrounded by a park where neighborhood children liked to play. The sisters finally closed the school in 2016; the building needed heavy maintenance, and the sisters were getting older. Nearby families were sorry to see the park close, and the students, some of whom did not have relatives to care for them and had been sent by social services, had to go to different schools.

What could the Dominican Sisters of the Presentation do with such a big piece of land? They decided to study ways to optimize the space, including the buildings that could still be used in a way that continued their ideal of hospitality.

"We started examining the possibilities in 2012, looked at different plans. Finally, a project designed by Habitat et Humanisme, a nonprofit structure which manages social housing in France, came up with one that seemed to fit with our wishes," Margron said. "Of course, we never thought it would be so huge. We took a risk. It would have been easier to sell the piece of land." 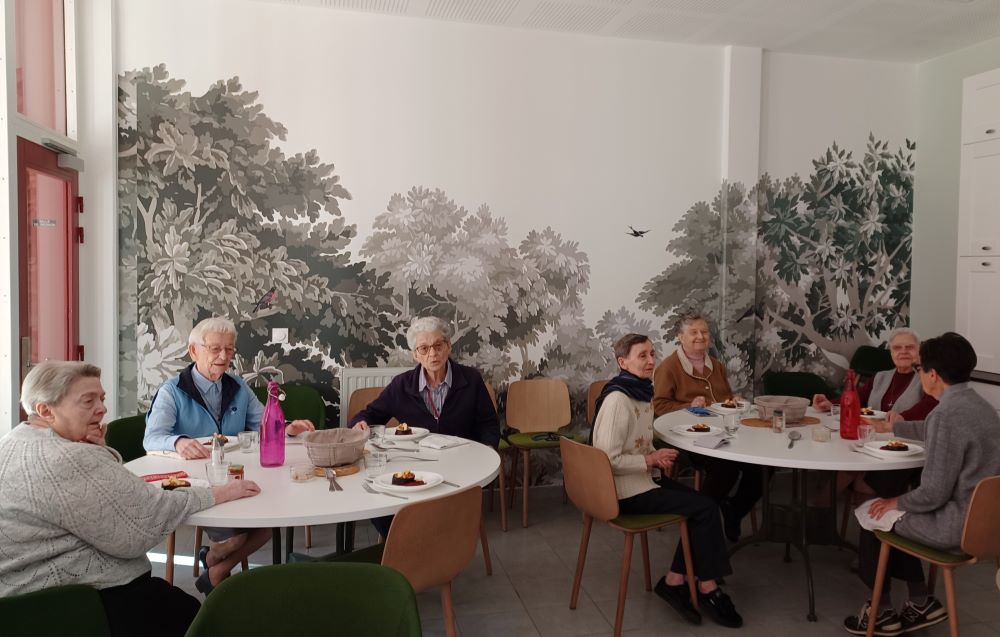 Sisters eat lunch at Maison St.-Charles in the 15th Arrondissement of Paris. Of the 20 sisters who live there, 12 are Dominican Sisters of the Presentation, whose congregation in France dates to 1697.

Habitat et Humanisme is a donor-funded association that finances housing projects for people in need. It was founded in 1985 by a priest, Bernard Devert, who worked in real estate before joining the priesthood.

It took 10 years for the plan to become reality. In 2017, the final plan was selected. Part of the land was sold to a real estate company to build 35 high-class apartments The sale enabled the congregation to finance its ambitious project for the rest of the property: housing people who applied for low-rent apartments run by the city of Paris. Everything was finished and people moved in earlier this year.

In addition to social housing, the Maison includes a big room for co-working and three meeting rooms for rent. Fifteen guest rooms are also available to visitors coming to Paris who cannot afford hotel bills. For example, members of a French association who hold their annual general assembly in Paris may have difficulties finding a place to stay at a reasonable rate for those traveling from places far away.

On an average day, about 100 people live or work in the Maison St.-Charles. During the day, the place is very quiet — "people who live here all have jobs," Ancery said. Volunteer workers take care of the garden, where they planted flowers, fruit and vegetables. Residents are invited to help there during workshops on weekends.

The chapel was redone: The high ceiling made it possible to cut the room in half from the bottom, and it now stands on the second floor above the hall. It is much smaller than the former chapel and boasts beautiful stained-glass windows from a local artist. The sisters meet in the chapel for 6:30 p.m. vespers before dinner. They also have a community room on the third floor with a view over the chapel's tabernacle.

Only 12 of the 20 sisters who live there are Dominicans. Three other sisters belong to the Society of the Helpers of the Holy Souls, which has its main house in another Parisian neighborhood half an hour away. One sister belongs to the congregation of St. Dominic; two are Xavières; and two are Canonesses of St.-Augustin from the Congrégation Notre-Dame. Only one sister, a Dominican from Colombia, still wears her habit. All are between the ages of 70 and 97. All volunteered to come to the Maison St.-Charles. 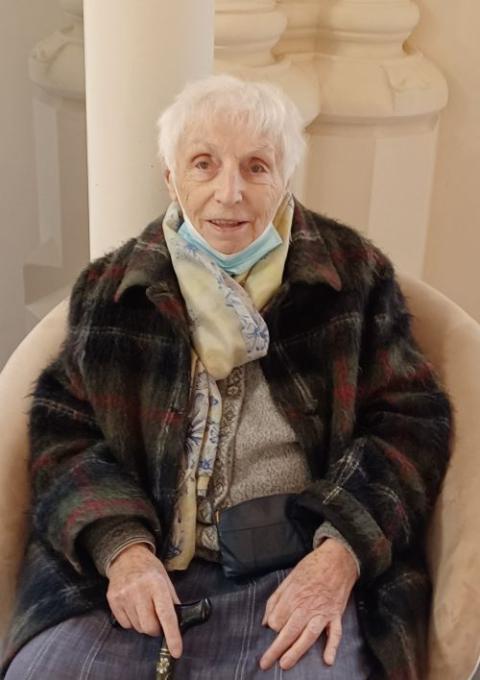 Dominican Sr. St. Michel, 97, is the eldest of 20 sisters who live at Maison St.-Charles in the 15th Arrondissement of Paris. (Elisabeth Auvillain)

"I liked the idea of being with sisters from other congregations. I also thought it was a good idea to live in a place where different generations would live together," Sister Marie Armelle told GSR.

Sister Marie Armelle, the first sister to move into the Maison in November 2021, regrets that the residents do not spend more time together. Some meet Saturday mornings for coffee in the garden when the weather allows. But most residents do not have much time: Each tenant has a job to go to.

Ten families with a total of 12 small children and two babies currently live in small apartments. Single parents — there are mainly mothers, but also two fathers, with one child or two — are supposed to move to a place of their own after two or three years. Two bigger apartments are shared by one student and a single parent with a child.

"We wanted for the residents not only a place to live, but a place they could call home," Margron told guests invited to the inauguration ceremony in September. "A place where different generations live together and meet for coffee or meals, get to know each other."

This takes time. Some residents come to the library to learn or improve French with a sister's help. For a while, 80-year-old Sister Monique enjoyed reading stories to children, who loved being with her. She had to stop for health reasons.

Sister Marie Armelle, 84, said she looks forward to more activities with the residents.

"I had a very bad case of COVID, then I had to rest for a year, so I stopped a lot of my activities," the former teacher said. "Now, I read stories to children with a handicap who attend a nearby school."

Other sisters bring coffee to homeless people or help children attending nearby schools.

A lot of people who are eligible for social housing need help understanding life in a city they do not always know: how to manage a budget, for example, or how to get the financial help they are entitled to, such as their health insurance and some benefits. City halls have lists of people in their areas who need help and are the ones who find accommodation for them.

Social workers paid by Habitat et Humanisme come to Maison St.-Charles twice a week to help residents deal with daily challenges. Most get an allowance from the city to pay their rent, but once they have a job, they may apply for a longer-term place to stay. Volunteers help residents figure out these new challenges so that they can become independent.

In the meantime, sunflowers in the garden give a wonderful touch of color to the place. Some strawberries will be eaten soon. Volunteers come regularly to take care of the plants.

"It is a place where different people meet," said Muriel, one of the gardeners, who is retired and lives in the neighborhood. "I find it really nice."