This story has been updated with quotes from sisters and additional information on assistance efforts. 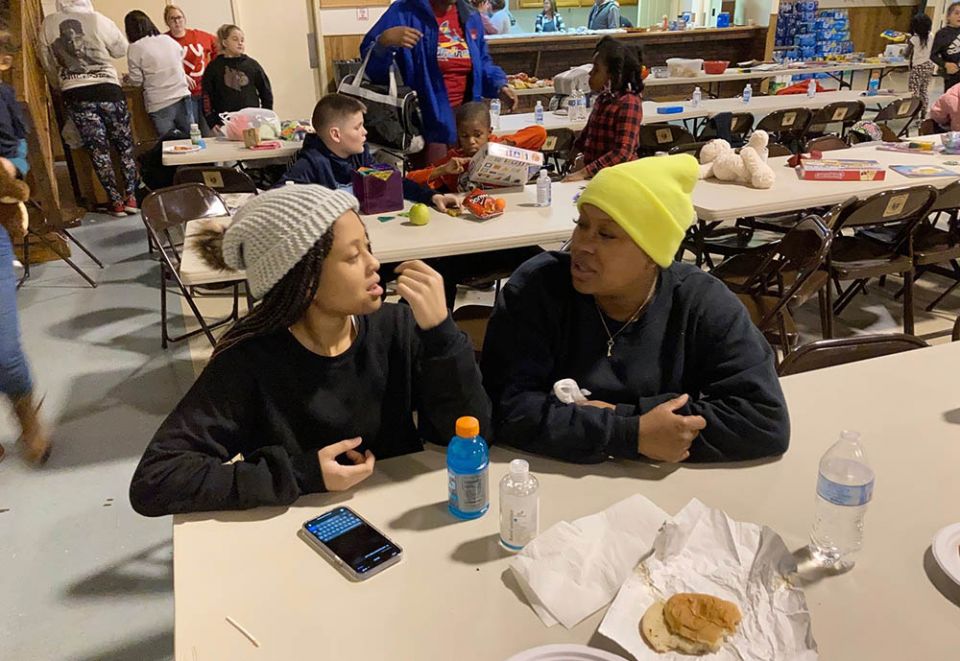 Courtney Saxton chats with her 13-year-old daughter, Querria, at the St. Jerome Parish hall in Fancy Farm, Kentucky, on Dec. 11. The family's Mayfield, Kentucky, home was destroyed by a tornado. (AP/Bruce Schreiner)

Tornadoes tore through the South and Midwest overnight Dec. 10, leaving paths of destruction that may be unprecedented and killing up to 100 people or more. Catholic sisters are answering the calls for help.

Ursuline Sister of Mount St. Joseph Martha Keller is the pastoral associate at St. Jerome Parish in Fancy Farm, Kentucky, 12 miles from Mayfield, Kentucky, which was devastated by one of four tornadoes spawned by a massive thunderstorm. Mayfield and Dawson Springs were "all but destroyed," according to Louisville diocesan newspaper The Record.

Keller has been heading up relief efforts at St. Jerome, where people arrived from Mayfield with nothing but the clothes they were wearing, which were soaking wet. Twenty-five people were housed in the parish hall, The Record story said, including a woman whose best friend had lost her 3-year-old daughter in the storm.

"Some volunteers went down the road yesterday and they went into a mobile home and found two elderly people huddled together who were dead. A woman was found in a tree. We have had parishioners outside Fancy Farm who lost their homes. They were in their basement," Keller told The Record.

On Dec. 13, the Red Cross converted the parish from a shelter to a distribution site for supplies.

Keller wrote in a Dec. 12 email to another congregation member that tornado sirens seemed to go off constantly the night of the storm, and she had spent more than 12 hours working at the parish hall to help those in need. “I am exhausted. But this is church at its best,” Keller wrote. “I have broken down a few times.”

In an interview Dec. 14 with Global Sisters Report, Keller said the devastation is so widespread, there are many small towns with incredible damage that people haven’t even heard about.

“Our distribution center is responding to things that have not even hit the news yet,” Keller said. 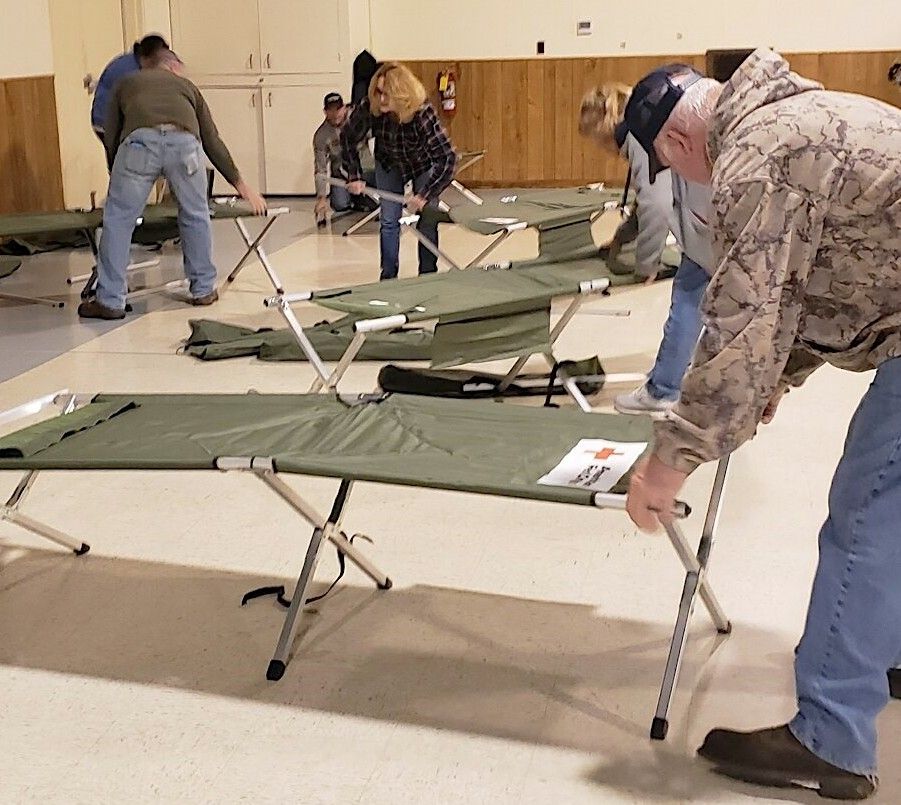 She said volunteer efforts in the area are just at the beginning stages of getting coordinated. Supplies by the truckload are being taken to the county fairgrounds for distribution, but that appears to be the extent of the organization of relief efforts.

"We have supplies that have come in, but we don't know where they're needed," Keller said. "They may be needed in places even more desperate than us."

Keller said a real problem is people in places with extensive damage, such as Mayfield, are attempting to live in what's left of their homes instead of going to shelters.

"There's no electricity, no water, but they have pets, and they can't take their pets with them to the shelters," she said. "As a pet owner myself, I understand, but there comes a time when you have to take care of your family first."

The Sisters of Charity of Nazareth are sending their disaster relief team to the area this week, the congregation said. Led by Sr. Luke Boiarski, the team of sisters, associates and volunteers is expected to work to meet whatever immediate needs people have now, and will likely be back in the future to address long-term needs.

The team has operated since 2011, when it helped victims after the tornado in Joplin, Missouri, and has since assisted at more than a dozen natural disasters. The Joplin tornado killed 161 people and caused up to $3 billion in damage.

Boiarski said the very first relief efforts are often the simplest, but the most meaningful.

"A lot of times what we're doing first is gathering people's personal belongings that have been scattered everywhere," she said. "We listen to them, pray with them, try to heal them spiritually, not just physically."

Curtis said that while in Bowling Green, they visited two neighborhoods, meeting a man who had been trapped inside his home. Behind his house had been an auto parts store that is no longer there, and houses in the neighborhood have been moved off their foundations by the force of the wind.

"You could see the terror on their faces," Boiarski said. 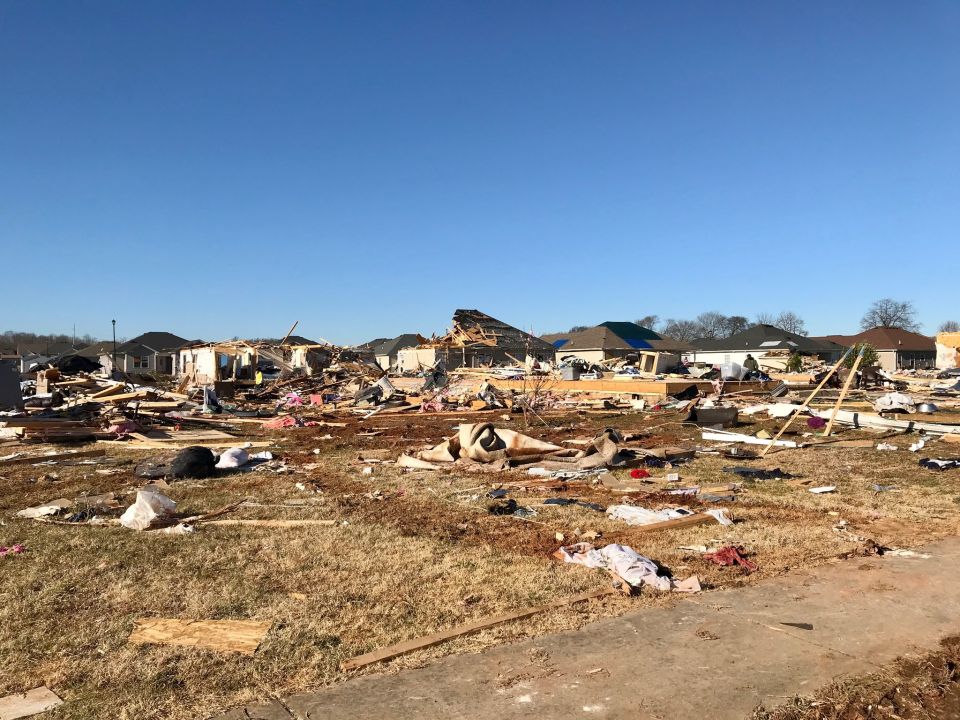 Houses are destroyed in Bowling Green, Kentucky, after a tornado overnight Dec. 10. (Courtesy Sisters of Charity of Nazareth)

No Catholic sisters appear to have been injured in the tornadoes. The Glenmary Sisters, based in Owensboro, Kentucky, said two of their sisters minister in areas that had tornado damage, but nothing compared to the devastation seen elsewhere. One of those sisters is in Caruthersville, Missouri, 8 miles east of Braggadocio, Missouri, where a 9-year-old girl was killed, her mother sustained "catastrophic injuries," and both younger sisters were hospitalized, one with a broken back.

Janet Willis, development director for the Glenmary Sisters, said financial donations are being handled by the Owensboro Diocese through Catholic Charities there. 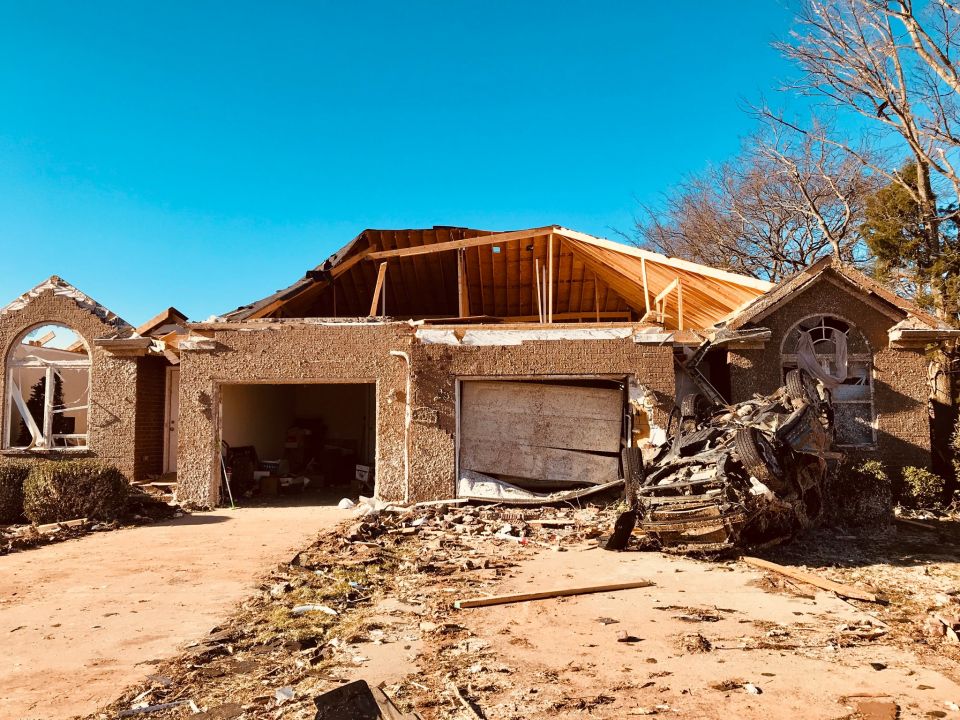 An SUV is upside down in front of what's left of a house in Bowling Green, Kentucky. (Courtesy Sisters of Charity of Nazareth)

The widespread damage has left thousands of people without electricity or water, so Water With Blessings is gathering donations to send water filters to the area. Water With Blessings' Sr. Larraine Lauter, also a Mount St. Joseph Ursuline, said 20 filters have already been sent to Keller in Fancy Farm, but many more are needed. Mayfield has no electricity, water or natural gas.

"Their water tower went down," Lauter said. "They have a very unstable water situation right now."

She said people's first instinct is to send cases of water to damaged areas, but that's not a long-term solution the way filters are.

"People are going to need access to safe water for a lot longer than some shipments of bottled water will last," Lauter said. "And then there's the plastic bottles — the last thing they need down there is more trash."

Keller said the filters will be especially important for people who can’t or won’t go to shelters and that the best way to help right now is to make financial donations to Catholic Charities.

Student brings peace-building skills to her many talents

The importance of a place to call home during the pandemic