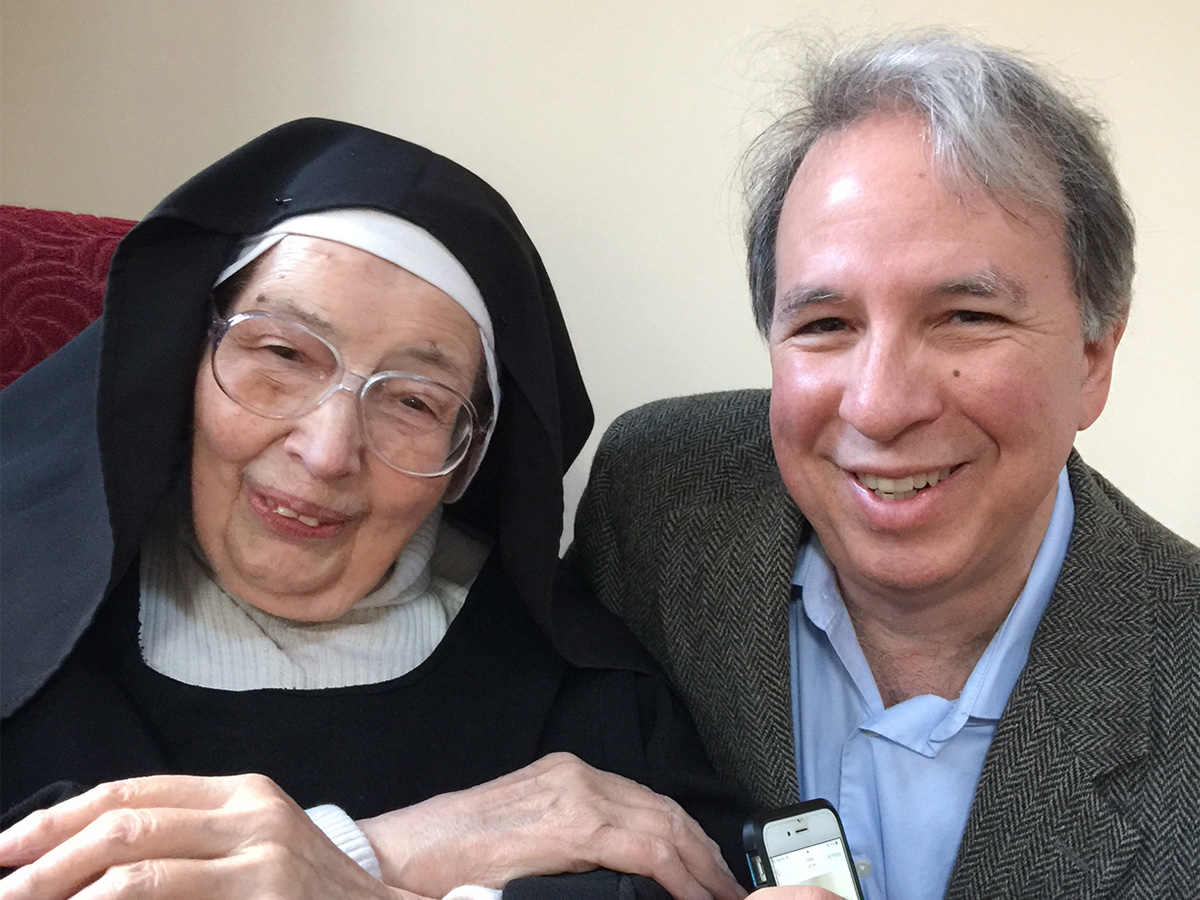 Sr. Wendy Beckett was both a contemplative, deeply devoted to a life of prayer and also, improbably, a BBC star and later the subject of a British musical.

For years, Beckett lived as a hermit in a trailer on the grounds of the Quidenham Carmelite Monastery in England. Then, beginning at age 61, she soared to international stardom with a series of BBC documentaries in which she toured museums across the world in her billowy black nun's habit, speaking about art with awe and wonder and showing people how to appreciate it.

In the years before her death in 2018, she began a three-year correspondence with Robert Ellsberg, the publisher and editor in chief of Orbis Books, an imprint of the Maryknoll order. Earlier in life, Ellsberg had been the managing editor of the Catholic Worker newspaper and spent five years assisting the movement's founder, Dorothy Day, whom Beckett much admired.

Ellsberg has now published a collection of his near-daily correspondence with Beckett, Dearest Sister Wendy ... A Surprising Story of Faith and Friendship. The book includes three years' worth of emailed letters back and forth on such subjects as saints, holiness, beauty, suffering and prayer.

RNS spoke to Ellsberg about Beckett, who combined a fierce intellectual capacity with a zealous devotion to Jesus and a growing willingness to open up about her life. The following interview was edited for length and clarity.

RNS: How did this correspondence come about?

Ellsberg: Sister Wendy sent me a note asking if we had damaged copies of an expensive series of books on Vatican II that we might donate to the monastery where she lived. After that, we exchanged notes from time to time. But her handwriting [made it] so hard to read her letters that it didn't encourage prolonged correspondence. When she was too old and infirm to live in her trailer, Sister Wendy began dictating letters to Sr. Lesley Lockwood. That meant it was possible to have completely legible messages from Sister Wendy.

Sister Wendy took very seriously her life as a contemplative and minimized all contact with the outside world. Why do you think she wanted to correspond with you?

I piqued her interest in things that were of infinite interest to her — saints, spiritual masters, holiness. Early on, I said, "I would love it if you would write about your personal life, your life of prayer or your own spiritual journey." She didn't have any interest. But at some point, we did venture into personal things, I think partly prompted by sharing my own story. I would describe things that happened to me and ask what she thought of it. She would respond to what I shared and shared more about herself. A kind of trust emerged between us. We realized we were creating something together. She knew her life expectancy was short. It put her in mind to reflect on things. 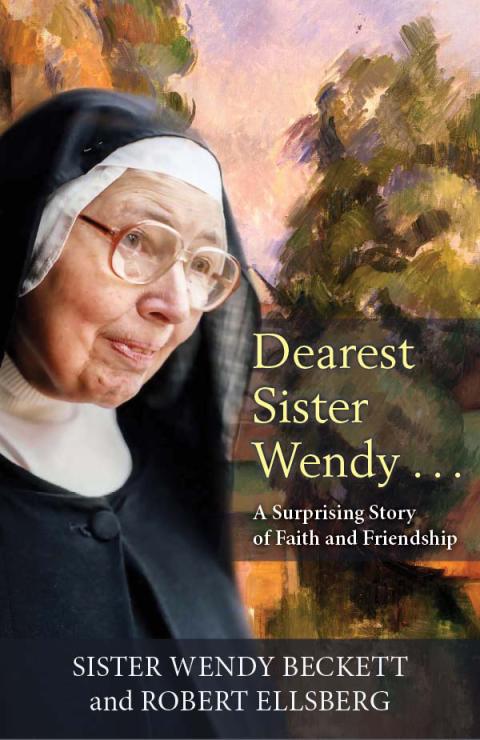 Why were saints so important to Sister Wendy?

The veneration of saints goes back to the early Christian church. Originally, it was martyrs. Then it was realized there were other ways of laying down your life through prayer, service and dedication. The church recognized people who were emblems of the holiness of God. They were not perfect but achieved a distinction in their spiritual life that would inspire others. Sister Wendy was interested in those exemplary figures who serve as special inspiration and models and the everyday holiness we're called to. She was also interested in people who may not be officially canonized as saints but whose questing and longing for God may inspire others.

You worked for one of those who may one day be declared a saint: Dorothy Day. How did that come about?

I had taken a year's leave of absence from college when I was 19. I had been raised as an Episcopalian but was inspired by Gandhi. That's what drew me to the Catholic Worker. It reflected the Gandhian approach to nonviolence, living in community, valuing common work and the works of mercy, protesting against structures that gave rise to poverty. I wrote articles about Gandhi for the Catholic Worker [newspaper], which Dorothy Day liked very much. She asked me if I would edit the Catholic Worker when I was 20.

I ended up remaining at the Catholic Worker for five years. It grounded my values and sense of myself in the Catholic Church, and I was ultimately received in the church in 1980. Dorothy Day died soon after that, and I immediately began editing her selected writings that were published later. I spent many of the decades since she died reflecting on her life and promoting her legacy, and that has involved promoting her cause for canonization.

Sister Wendy lived on the grounds of the Carmelite order, but she was not a member of it. She had taken private vows as a consecrated virgin and hermit. As a hermit, she considered her whole life prayer. She would be in the darkness of her cell and pray. It was a total silence, sitting there in the presence of God, opening her mind and heart to the love of God. In the morning, she went to Mass. Then she spent the morning reading or looking at pictures of art, which for her was a contemplative practice. She considered all things referred her to God.

She wasn't trained as an art historian. Her degree from Oxford was in English literature. How did she develop an interest in art?

She had contributed income to the monastery by undertaking Latin translations and then asked to look at art books. She didn't consider herself a scholar, just a remarkably empathetic responder to art. She began writing articles on art and then a book on women artists, and it got to the attention of the BBC. It's an extraordinary story of being discovered in a most unlikely way.

Sister Wendy didn't care for our modern indulgence with self-knowledge. She disdained spiritual directors and hated the Enneagram. Why?

She had this idea that she didn't have a self, that her own story was not important and that she lived completely in the presence of God and did not look backward. But in the course of her correspondence, she really did begin to look back at her life to see patterns that led her to a very unusual calling to solitude as a hermit. In our correspondence, she was surprised to find herself looking back at the patterns in her life, of all of the ways she'd felt like a misfit or an ugly duckling in a pond. In the past, this had discouraged her from sharing about herself because she thought other people couldn't understand her.

She didn't take sin very seriously. Explain how she thought of it.

She believed actual sin was rarer than we suppose. She was very forgiving of people's foibles and flaws as long as they continued to want to be with God and wanted to be more loving. She felt that was what God pays attention to. She felt the sacrament of reconciliation or confession was a wonderful thing. It's not about listing the bad things we did but acknowledging our failure to love. In doing that, God's love fills that space. It was consistent with her belief that we place too much emphasis on sin rather than on the overwhelming mercy of God.

I think she felt we were only beginning to understand this great mystery and that there was a spectrum in sexual orientations. She said she never had sexual feelings. For her, the life of celibacy was not a sacrifice. But she was not prudish about sexuality or the human body. It was all part of God's creation. She didn't see any difference between men and women. We're attracted to people based on their intelligence, their humor, their kindness. She didn't see how gender entered into it.

How did she choose to die?

She had a certain anticipation and happiness. She had pulmonary fibrosis, a hardening of the lungs, and she suffered a great deal physically, but even that she felt was a gift because it allowed her to identify with the cross of Jesus, which she felt could not be separated from the resurrection. She had frequent heart attacks. She had accidents where she fell. She had coughing fits. It was quite clear she was on a downward trajectory. Eventually, she realized she did not want to be a burden on the sisters and accepted going into hospice.

It was very moving to me to think that all her letters were "written" in her very precious breath that was expended with such effort. In her last message, which she sent not just to me but to other friends, she said, "When the day comes I want you to turn to God with great thankfulness for all that he has given me. This is the time of the deepest joy." To this, she added a characteristic P.S.: "How embarrassing it will be and depressing if the Lord works a miracle, and I don't die after all."