Q & A with Sr. Bernardine Pemii, protecting children from abuse in Ghana 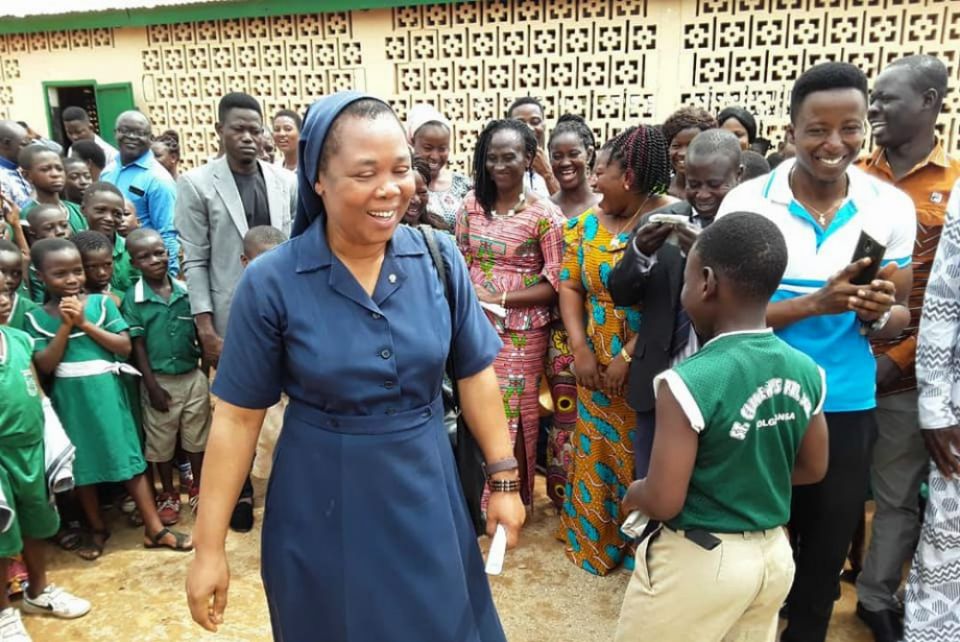 Sr. Bernardine Pemii is known for being a devoted mother to the large brood of children she has rescued from violence, exploitation and abuse.

The African nun, who recently completed a course on child protection at Rome's Pontifical Gregorian University, is committed to protecting children from abuse at home, at school, at church, in the community and during humanitarian emergencies.

Kids are victims of trafficking, sexual exploitation, physical and humiliating punishment, and harmful traditional practices, she said, and they can be recruited into armed forces.

"Parents should protect their children, from home to the school and to the church," Pemii told Global Sisters Report. "Children are being exploited every day in ways that are shocking to their well-being."

The lives of millions of vulnerable children around the world are trapped in all forms of abuse, denying them their childhood, their health and education and condemning them to a life of poverty, according to UNICEF.

Pemii, a Daughter of Charity of St. Vincent de Paul from Nigeria who works in Ghana, is urging Catholic bishops to address and end the exploitation of vulnerable children in society. Clerical sexual abuse has long been a problem that the bishops need to address by listening to the victims, she said.

GSR: Tell us about yourself and your work protecting vulnerable children from violence, exploitation and abuse.

Pemii: I am a Nigerian from the Ogoni tribe in Rivers State in southern Nigeria. I belong to the congregation of Daughters of Charity of St. Vincent de Paul. I have been a nun for 29 years, with 16 years spent in Ghana.

My work as a safeguard is part of our charism coupled with my passion. This passion was ignited when, less than a year after my novitiate, I was scheduled to work on a rescue team during the 1993 genocide in some parts of the oil-rich Rivers State in Nigeria.

As the only nun on the team, young and inexperienced, I was shocked at the level of abuse (sexual, physical and emotional) perpetrated by the military personnel deployed to maintain peace in the area that was never reported on the news for the world to know. So I dared to speak up by publishing in local newspapers the real situation of the people and granting interviews that contradicted what the government was telling the world. This was a big risk in a military regime and led to the deportation of an Irish nun who twice supported me on the field. 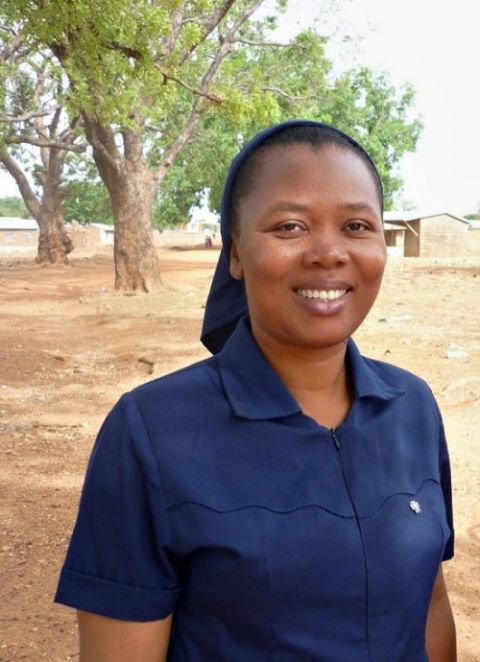 Ultimately, the world got the truth, and the government had to withdraw the troops to give way to peace and reconciliation in the area. This started my advocacy on safeguarding/protection of children and vulnerable adults.

How has your journey been?

My journey will require a whole book, but suffice it to say that on arrival in the north of Ghana, I was posted to a rural school, where I found the students used like donkeys on their teachers' farms during instructional hours. This sight was a sword in my heart, as these students labored in their school uniforms without food, and some of the teachers sexually preyed on the little girls, who were 14 to 16 years old.

I felt I needed to act, so I engaged the teachers involved, but there was no change. I then reported the situation to the government director of education, who paid a surprise visit to the school and found the students on the teachers' farms on arrival. You can guess the rest of the story, which brought an end to the students' enslavement, though it made me unpopular among the defaulting teachers.

In that same village, a widow with 10 children was denounced as a witch and forcefully taken to a witch camp for refusing sexual engagement with her late husband's brother. With my community's support, I ransomed her from the witch camp and resettled her and her children in another community, got her a trade and put the children back in school.

Her husband's family raged and told me that the woman and her children would all die within three weeks and I would be forced to eat their dead bodies. I prayed and believed that no harm would befall them, and so it was. To this day, 14 years later, the woman is alive with all her children, who have all graduated from the university, with the exception of one, who is in her second year.

How does working outside your country affect you?

Ghana and Nigeria are different, yet similar in many ways. I hardly remember that I am not Ghanaian except when I take unpopular stands that seem unfavorable to those who take advantage of children and the vulnerable for their own benefit, and then they remind me that I am a stranger and not Ghanaian.

Experience has taught me to live and work here as if it was my birthplace, respecting and appreciating the people and their culture while challenging any system that dehumanizes. Resilience and personal conviction have taken me where I never dared to go, and Jesus' gift of "a joy that no one can take away" (John 16:22) is my reality working outside my home country.

Tell me your motivation.

The transformation I see in the life of survivors whose recoveries I've been part of makes me want to give up my all to save the lives of others. Again, my connectedness to God in prayer and dependence on his providential care, the spirit of our founders and the exemplary witness of some of our sisters motivates me.

You are also a teacher and supervisor of Catholic schools in your diocese. How do you handle these various duties?

Yes, my passion takes precedence over my profession, but they work together. I am employed by the government as a teacher to work with the diocese as supervisor of their 453 schools managed in partnership with the government. These schools are the avenues through which I implement the child protection policy of the diocese. I conduct formation sessions on safeguarding and child protection for staff and students in these schools. So my involvement with the schools is an added advantage in promoting child protection and safeguarding. I love the way these work out.

You recently completed a course on the protection of children and vulnerable adults. How do you plan to put that into practice?

I was already working in this field before going for the program, so I am now improving on what I was already doing. With the support of the bishop, I recently organized a two-day formation session for different stakeholders in the region (media, traditional authorities, security, social workers, lawyers), canvassing their support to make our homes, institutions and churches safe places. I am in the process of renewing and updating our Diocesan Child Protection Document. 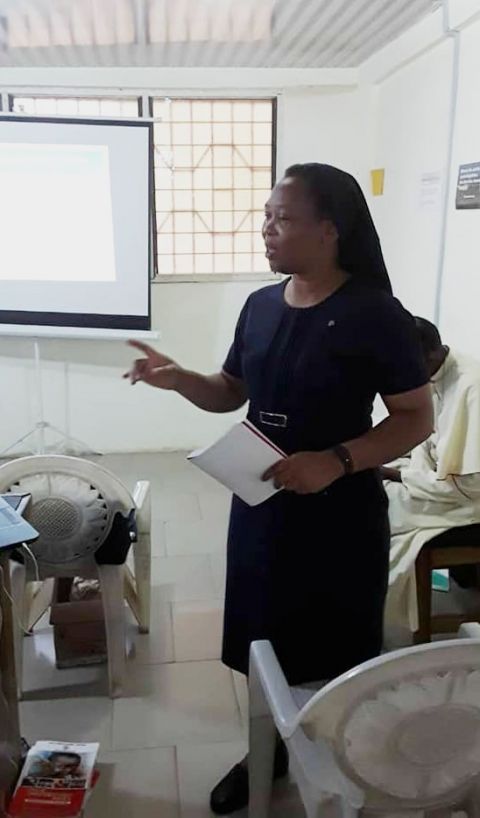 Can you tell us something about sexual abuse in the church and how you ensure that the victims are given a chance to be listened to?

In the course of my work with two different teams to handle cases of sexual abuse by clerics and religious, I've met denial and resistance. I cannot say much here due to the nature of these cases, but suffice to say, this area is one of the emotionally draining aspects of my work since I started active involvement in protection of children and vulnerable adults. The good news is that in each case, a victims-first approach is used to get them favorable hearing.

Tell us the worst thing you experienced while trying to rescue children from being abused.

I was betrayed by a team member who preferred compromise to the truth about clerical sexual abuse and who worked to convince his colleagues to get rid of me because my presence was considered dangerous and threatening to them.

What have you achieved so far?

I have reduced incidences of abuse, especially corporal punishment and sexual abuse in these schools. Seventy-five percent of the diocesan population is aware of the existence of a Diocesan Child Protection Document and a team they can contact.

Two other dioceses have benefited from same formation sessions for teachers and students. I also connected a priest from another diocese to the same program in Rome to build a formidable diocesan team.

How would you advise other nuns around the world who also want to protect children from abuse?

You will be unpopular but fulfilled as you assist victims to be the best of themselves. It is emotionally demanding, so you need not only a spiritual director, but someone with a similar background with whom you can share regularly.

Be prayerful, vigilant and discerning, because even the victims can turn you into a victim. Be brave, resilient and proactive, and know that your closest collaborator can betray you.

Do you have anything else you would want to share?

The church in Africa is blessed with vocations, and active Christians, young and old, still come to church. To sustain this, I encourage all of us to get involved in the campaign against abuse of minors and vulnerable adults, especially by trusted fellows like the clerics and religious. We should guard against becoming perpetrators within our communities, workplaces and society, especially in our relationship with our staff. Clerical sexual abuse is global, Africa included, and no amount of denial by some of us Africans can change this fact.

Ministry | Q & A with Sr. Bernardine Pemii, protecting children from abuse in Ghana

Spanish sister killed in Haiti described as 'energetic, enterprising, a woman of vision'