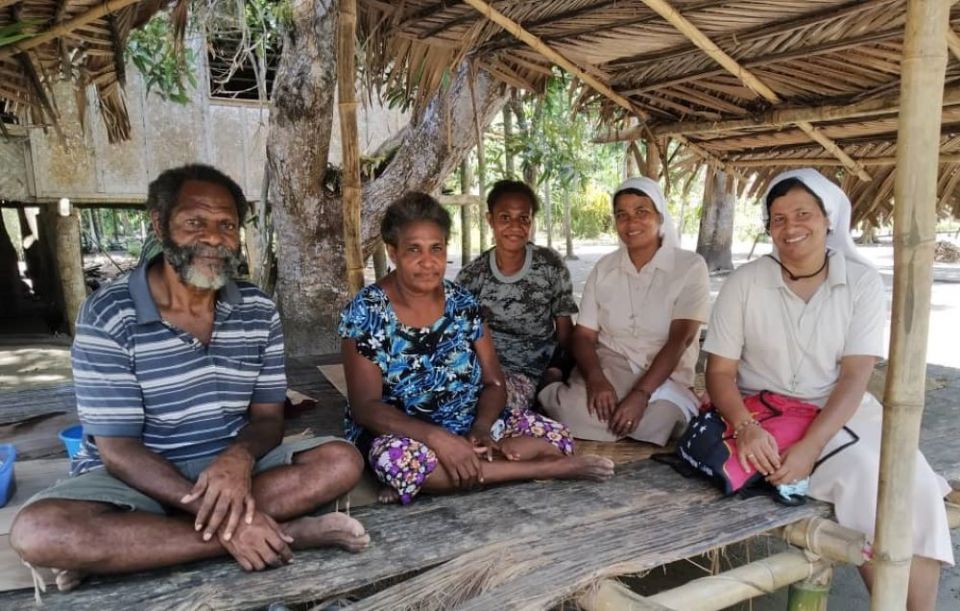 Sr. Shephali Khalko of the Missionary Sisters of the Immaculate, second from right, conducts a family visit with another nun in Gulf Province in Papua New Guinea. She has been working in the country for 10 years. (Courtesy of Shephali Khalko)

Sr. Shephali Khalko, a member of the Missionary Sisters of the Immaculate, has been working in Papua New Guinea for the last 10 years. She helps islanders support themselves by providing training so that they can operate small businesses. She also teaches catechesis and often does family visits.

Although most people in Papua New Guinea are Christian, Khalko said many practice indigenous traditions and require spiritual care and guidance, and there are not enough religious vocations. She said on many islands, Catholics only attend one Mass a year because of a lack of priests.

Currently, Khalko is responsible for a boarding house for 100 dropout teen and female students. She helps them learn life values by providing counseling to strengthen their Catholic faith.

The 50-year-old member of the Oraon tribe in Bangladesh spoke to Global Sisters Report recently when she returned home for a vacation.

GSR: How did you end up in Papua New Guinea as a missionary?

Later, I felt fear. At that time, I didn't know the culture and language of Papua New Guinea. I was told there were hundreds of islands there with over 800 different languages. However, I talked with Jesus Christ and obtained inspiration to go do mission work in Papua New Guinea. I first landed as a missionary on May 23, 2011. I learned the local language of Motu first.

What is your responsibility there?

Presently, I work for dropout students who couldn't pass grades 8 and 10 in Araimiri in Gulf Province. I am in charge of a church-run boarding home for 100 young girls. The local bishop observed that students who dropped out needed to be taken care of, so I got responsibility for it.

The moral life of youth in Papua New Guinea is different. Many women become pregnant before marriage. My boarding house also had some pregnant students. I am responsible for providing them moral and Christian formation and counseling on life so they won't be a burden to others. In our home, they start to study again to continue their education. To look after the students, I stay in the boarding house at night. We also train them on handicraft skills. 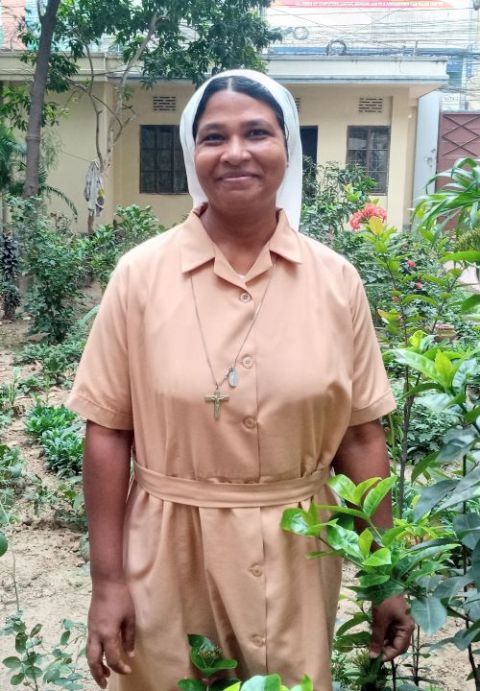 Sr. Shephali Khalko of the Missionary Sisters of the Immaculate stands in a flower garden at her provincial house in Mirpur, Dhaka, during a recent trip home to Bangladesh. She is a member of the country's Oraon tribe. (Sumon Corraya)

The first seven years of my missionary work in Papua New Guinea was in the Trobriand Islands in Milne Bay Province. In these islands, I also worked with children and youth. It is easier to motivate children than adults. Therefore, other sisters and I give priority to children and youth. We invested much time in their formation.

We established a team named Missionary Childhood. I taught children catechesis each Saturday. Although the people of these islands are Christian, they have many cultural beliefs. If someone dies, the relatives deem it a murder. If someone becomes sick, they also blame others. They trust that their ancestors will return to help them harvest the crops, so they conduct festivals after they have collected crops from the fields.

Priests and nuns often do family visits as part of their pastoral work. Young, unmarried girls become pregnant early, and there is no justice for those girls. They think the next generation is coming. I told them it is a sin. I counsel them during family visits and teach them in school and catechesis class. 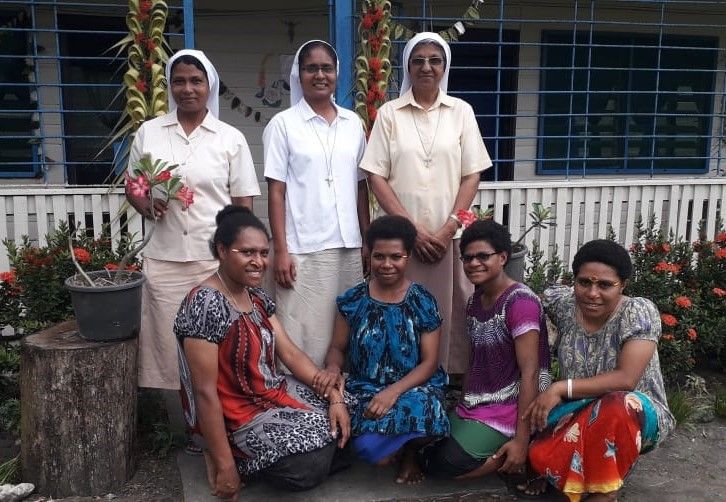 Sr. Shephali Khalko of the Missionary Sisters of the Immaculate, back row left, with other sisters and some of the students at her boarding house in Papua New Guinea. She oversees the church-run home for 100 girls. (Courtesy of Shephali Khalko)

If Papua New Guinea is a Christian country, why do missionaries need to take care of its people spiritually?

When I first arrived in Papua New Guinea, I thought that since it is a Christian-majority country, there was no need for any missionaries. In addition, Missionary Sisters of the Immaculate generally go for mission work in non-Christian areas.

When I reached Papua New Guinea and stayed there, I deeply understood the need for foreign missionaries. The Catholic faith is not strong there among many Papua New Guineans.

For example, when a Catholic woman died, the family started oiling the dead body and decorating it with ornaments. I said, "Why are you doing that instead of reciting the rosary?" They answered, "The body is warm, so it needs to be decorated. When it is cold, it will go to Tuma Island to face the judgment." Tuma Island is an island in Papua New Guinea. I put a rosary in the fingers of the woman's body, but a relative removed it and was angry. They also kept food, a dagger and clothes with the body. When in an invisible way, the dead body goes to Tuba Island, they believe these things will be helpful to go a long way and face the judgment. This is how I realized that Papua New Guinea still needs missionaries.

Missionaries in Papua New Guinea preach the Gospel through inculturation. For example, when a Papua New Guinean sees ordinary images of Mother Mary, they say it is foreign Mother Mary. Once, I met a young man who could paint. I asked him to draw a picture of Mary to look like Papua New Guineans, and he did. I hung it on the wall. Later, I noticed that the students respected that image and prayed in front of it. The same thing happens when they see any sculpture of Mary or Jesus Christ. They become happy if any religious statue looks like them. This is how we tried to give them motivation.

What about religious vocations?

Some islands of Papua New Guinea have sufficient vocations. But most of the islands don't have much.

There are many religious vocations from New Britain [formerly New Pomerania], catechist Blessed Peter To Rot's island. His beatification was celebrated in Papua New Guinea in 1995. Inspired by his life, many young people entered seminary and formation houses from New Britain. Religious trust also runs deep in the people of this island. From this island, many priests, nuns, bishops and even a cardinal have come to the Catholic Church in Papua New Guinea. 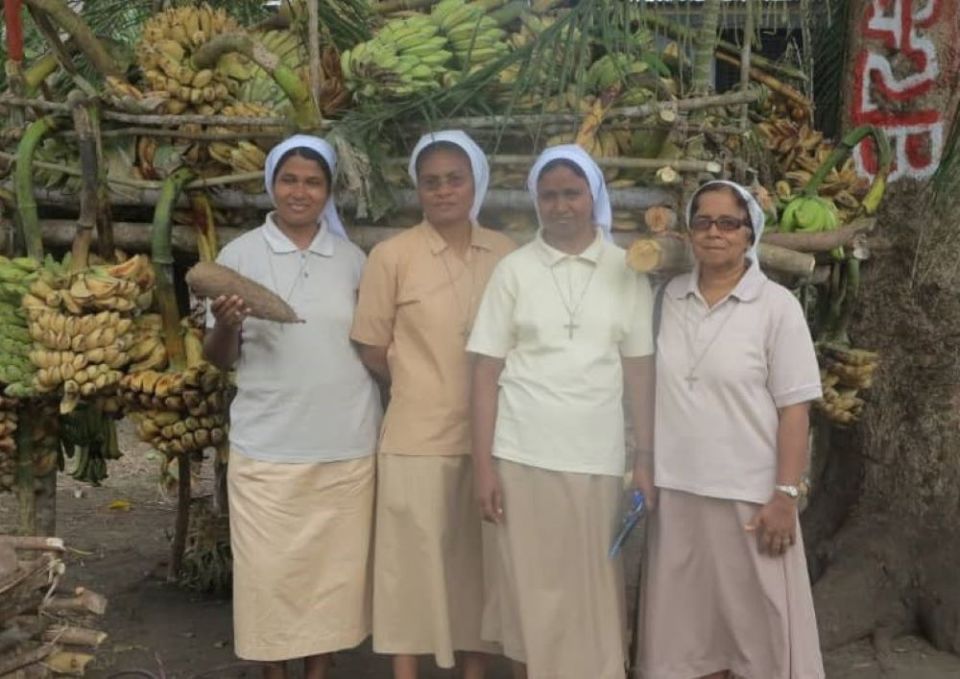 How do they treat foreign missionaries there?

The faithful of Papua New Guinea love missionaries. When I left the Trobriand Islands, the faithful asked me not to leave. They became emotional, and they cried. I told them that as missionaries, we cannot stay in one place a long time. However, they conducted an excellent farewell program for me.

I noticed they do immensely respect missionaries. The faithful of the Trobriand Islands told me that we have their love even though they didn't have much money to give. They sent food on Sundays for the priests and nuns. They shared the kitchen garden's crops — tomatoes, potatoes and other vegetables — with us. During crop harvesting, they sent crops for us. They pay us with honor and love.

What kind of challenges do you face as a missionary?

I already mentioned some challenges regarding their culture and superstitions.

Another significant barrier is the lack of transportation. When we travel to any city or village, we can only travel by boat. Moreover, we have to walk two to three hours to reach villages for pastoral work. Air transportation is available but very expensive.

Please share a story of a former student who has transformed his or her life with your formation and support.

There is a former student from a needy family in the Trobriand Islands. We helped him by providing shoes and school dress. We also inspired him to study and become educated to move his family out of poverty. He has finished his studies and has a job in a school. During holidays, when he comes home from the workplace, he visits our convent and expresses his gratitude. He also inspired other needy children to study and become a success like him.

We check the family backgrounds of the children and youths and find that many children suffer immense pain because of family problems. We provide counseling to them to reduce their suffering.

When foreign missionaries came to Bangladesh, the Bangladesh church was small and young. We were not prepared to go do mission work at that time.

Foreign missionaries planted the seed in this land, and the seed grew as trees. Now, the trees are bearing fruit. We have excellent religious vocations, and we can serve outside of the country in addition to fulfilling the demand in our country.

In Bangladesh, we got a cardinal [for the first time in 2016]. Catholic priests and nuns run universities, schools, colleges and hospitals. Foreign missionaries helped us to grow and become self-supporting. We thank them. 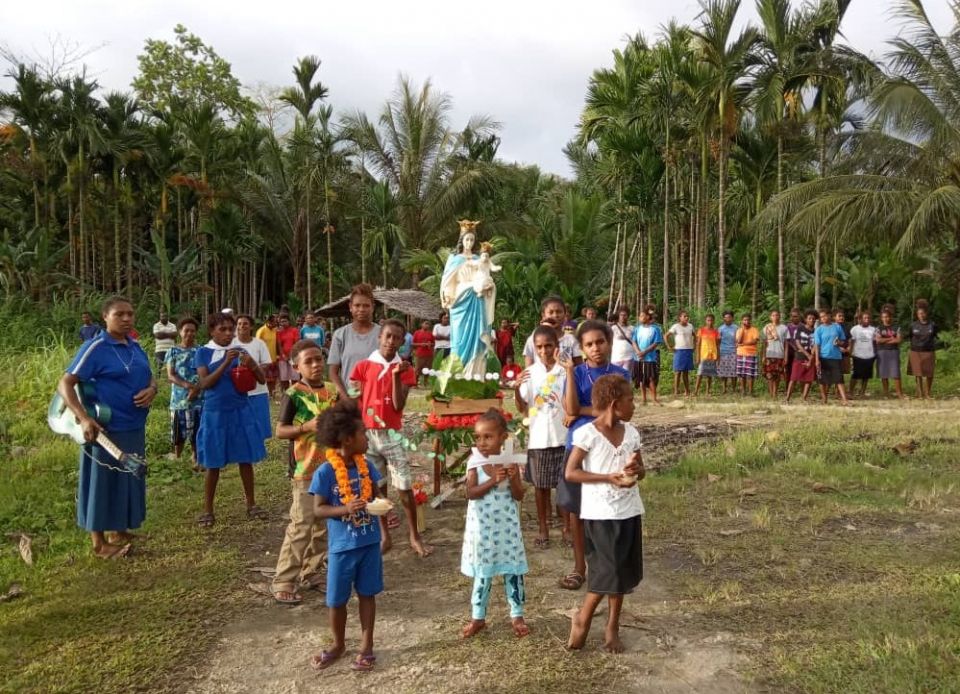 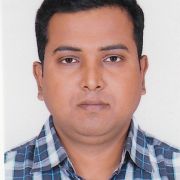 Sumon Corraya is a journalist based in Dhaka, Bangladesh.

Q & A with Sr. Dominga Zapata, reaching out to Hispanic Catholics through 'Encuentro'

Q & A with Sr. Mary Owusu Frimpong, bringing health care to the margins