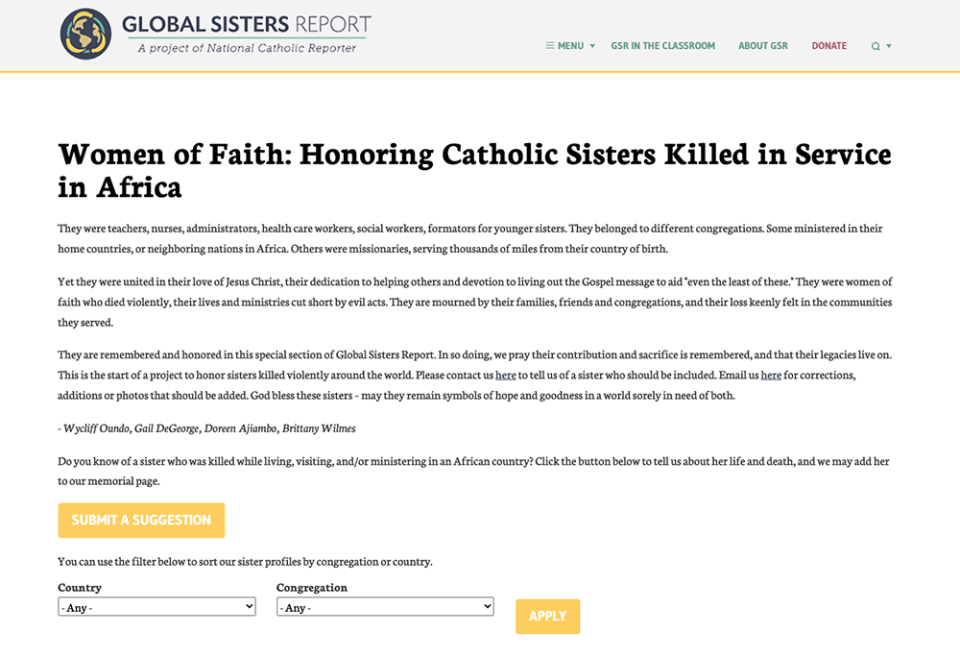 The Bible and sacred literature include numerous stories of religious women who defied social norms to spread the Gospel in their communities. Many of these women were persecuted for their faith and sexuality, viewed as inferior in biblical times. Today, many religious sisters mirror their predecessors’ suffering in their vocations to evangelize and care for God’s people in a world that is increasingly contentious.

Archives exist of women religious who have been attacked, killed, maimed or held hostage while serving in their missions and ministries. Many such archives pay homage to sisters in or from more developed nations who have lost their lives while serving in more remote parts of their own countries or as missionaries to other nations. Often forgotten are nuns killed while serving Indigenous communities in underdeveloped countries, especially in Africa, and particularly if they were from Indigenous communities themselves.

Tracking down sisters who have been killed in Africa is a difficult task. Agenzia Fides, an information service of the Vatican focused on missionary activities, collects data and tracks clergy and women religious who have been killed through acts of violence across the world, and tabulates a yearly casualty report.

The report further established that many assassinations of missionaries were through robberies and attacks in the Indigenous communities they served. These cases were prevalent in African impoverished communities that lacked well-established social contexts and security parameters.

Catholic sisters carrying out pastoral duties in these communities strive to fit in with the population, living simple lives and serving the needy. They were not responsible for aggravating or starting any conflicts that resulted in placing them or their colleagues in danger. However, this did not shield the religious sisters from numerous challenges and from harm's way. Take, for instance, Sr. Clara Agano Kahambu, a Franciscan School Sister of Christ the King who served her society as an educator at Mater Dei Parish in Bukavu, in eastern Democratic Republic of Congo. Kahambu was killed Nov. 29, 2016, in her office by a man who gained entry into her school by pretending to be a student's guardian.

Systematic corruption in African countries such as Sudan, Burundi, Somalia, Zimbabwe, and Angola has contributed to high poverty rates. Unemployment and climate-change-induced effects such as floods and droughts have further challenged religious women's vocations in these countries. Other nations like Nigeria, Somalia, South Sudan, and the Democratic Republic of Congo were noted for their insecurity and were issued Level 3 and above travel advisories by state departments. Religious sisters working in these nations were at constant risk of kidnappings, extortions, armed robberies, terrorism, and civil unrest. 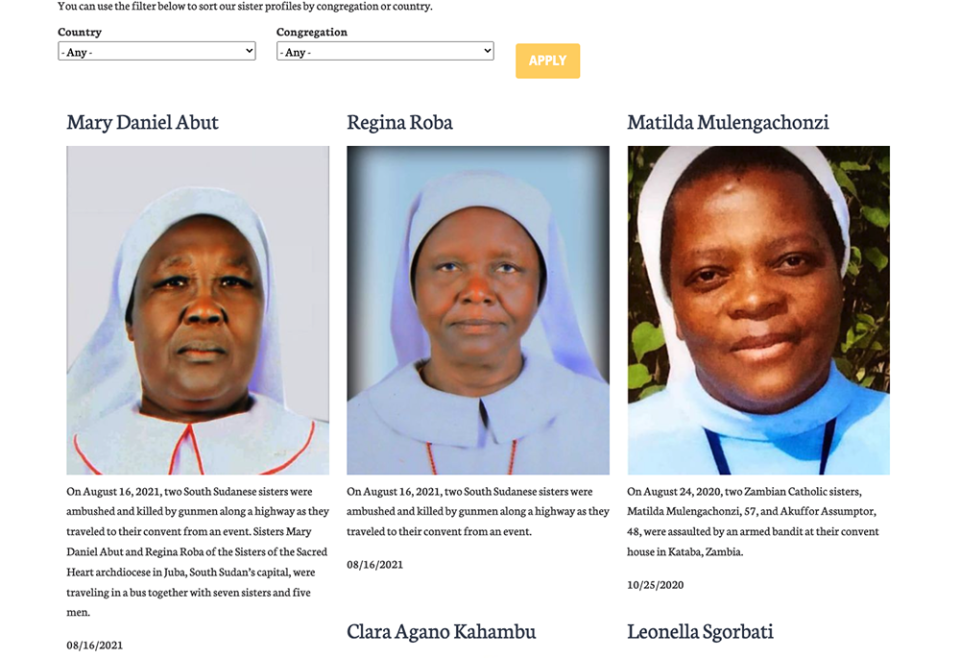 Religious conflicts were catalysts to violence taken out on sisters serving in communities where Christianity is shunned by the dominant religion. In Mogadishu, Somalia, Sr. Leonella Sgorbati and her bodyguard were gunned down in September 2006 as they left a children’s hospital where the nun worked. The killing of the Italian Consolata Missionary sister was attributed to the rising tensions among the Muslim population in the nation.

In Nigeria, terrorism and insecurity contributed to a kidnapping crisis aided by religious conflicts. Armed rebels raided villages capturing children and religious women. On Nov. 13, 2017, six sisters were abducted by gunmen who invaded their residence in Iguoriakhi, Edo State in Nigeria. Sisters Roseline Isiocha, Aloysius Ajayi, Frances Udi, were professed nuns while the other three were aspirants. The six religious women were held captive as their kidnappers demanded a $55,000 ransom. On Jan. 6, 2018, the police were able to secure their release without paying any ransom.

Numerous reports have been filed in Africa citing instances where foreign sisters have been killed serving people and children in need. On Oct. 20, 1992, Srs. Barbara Ann Muttra and Mary Joel Kolmer were attacked and shot dead by gunmen on a dirt road they were traveling on to drop a worker at his home. Three days later, on Oct. 23, Srs. Kathleen McGuire, Agnes Mueller, and Shirley Kolmer (a cousin of Mary Joel Kolmer) were shot and killed in front of their convent in Gardnersville (a township in Liberia) by soldiers. The five Adorers of the Blood of Christ American sisters have since been regarded as martyrs of charity.

Another widely reported incident occurred in Bujumbura, Burundi's capital. Three elderly Xaverian Italian nuns: Srs. Lucia Pulici, Olga Raschietti, and Bernardetta Boggian were killed in twin attacks at their convent in September 2014. The killings of the sisters who had stayed in the area for years serving the needy, building churches and vital amenities sparked anger and public outcry both locally and internationally.

The attention to these incidents, however, contrasts with the deaths of local sisters who lost their lives while serving in native African communities. Their deaths are rarely reported by mainstream media and news platforms. Rural communities in the African continent experience the highest rates of the digital divide. Most African media agencies are located in major towns and cities cutting off Indigenous communities from information access. For many local sisters killed in service, their lives are only memorialized in the communities they served and in a few archives. Until now.

I had the honor, months ago while interning for GSR to investigate, catalog and factually recount the circumstances that led to the murders of native African women religious — to write about their lives, vocations and their contribution to the communities they served. The project was expanded to include missionary sisters from elsewhere killed in Africa. I had underestimated how life-changing this special project would be; reading through various sources full of violent and vivid encounters, often ending tragically for these humble sisters, was an emotional rollercoaster. I learned just how impactful this project was going to be to congregations across the globe. I hope it will be a gateway to honoring all the brave sisters who have been killed violently, even as they graced the world with their kindness and service to vulnerable societies. My lifelong journey to adventure