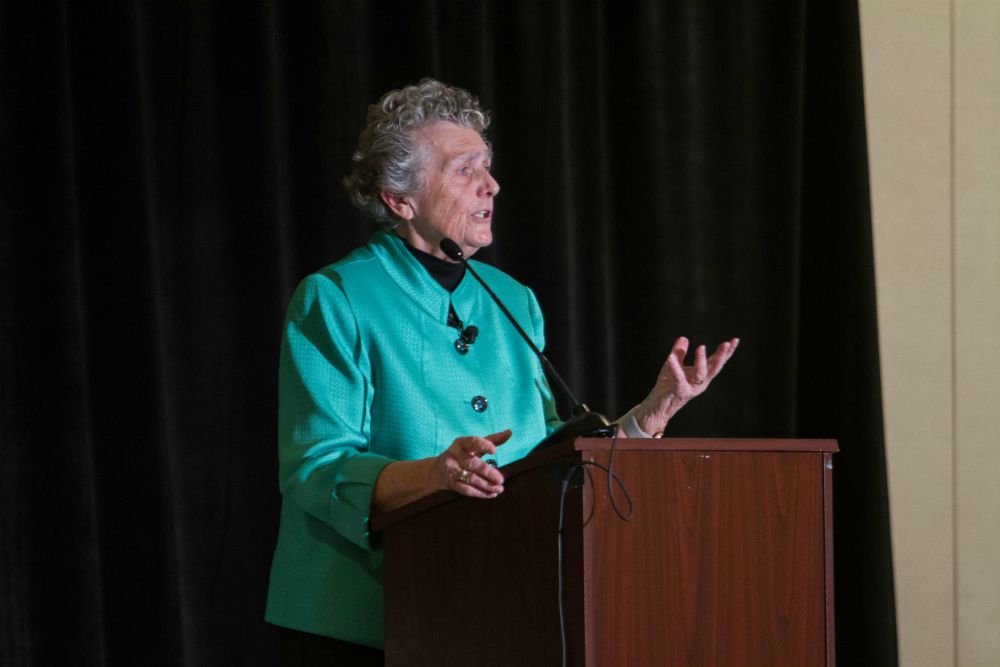 Challenging women religious and those who speak on their behalf to be prophetic voices, noted author and speaker Sr. Joan Chittister provided a clear call to counter forces that perpetuate the problems of poverty, injustice and inequality in the world and the church in her keynote address Oct. 2 at the Communicators for Women Religious (CWR) conference in Mesa, Arizona.

Chittister — a Benedictine Sister of Erie, Pennsylvania; author of more than 50 books; a regular columnist for National Catholic Reporter; and a former president of the Leadership Conference of Women Religious — spoke to the more than 150 attendees of the CWR's 25th anniversary in a speech that drew its title and theme from her latest book of the same name, The Time is Now: A Call to Uncommon Courage.

CWR presented her with its inaugural Advancing Image and Mission Award, recognizing her "significant contributions to advancing the image and mission of Catholic sisters through her extensive work as an international lecturer, author and courageous advocate of justice, especially for women, in both church and society for more than 40 years."

In her address, Chittister recounted her own naiveté in believing that change would come once people understood social imbalances, the second-class status of women, the marginalization of people of color and the theological deviance of clericalism. Then, she said, "I got it."

"There really are forces that are working consciously against cultural change," she said. "Built into society, it seems, is the wanton destruction of creation for the sake of personal profit. The casual dismissal of scientific concern for the care of the Earth, the ongoing destruction of nature for money, and the gall to enshrine a minimum wage rather than provide a living wage, and under it all, a new political goal: the increasing concern by politicians to create a political base for themselves in order to retain their seats for years rather than secure the future of the country."

Moreover, in religion, the one arbiter of ethical standards, we have "even managed to domesticate Jesus. ... We have made him 'sweetness and light' in a nuclear world," she said. "The problem is clear: In a world such as this, we have lost sight of ourselves as Christians. We have simply abandoned the awareness of what we are required to do about it."

The popular embrace of "Jesus the healer" has obscured the more radical Jesus, who challenged the status quo and religious leaders of his time, Chittister said.

"We live in an era that accepts half of what it means to follow Jesus," she said. "We want our religion in a spiritual Jacuzzi, a feel-good spiritual world."

"We do mercy very well, but the fact is that the model of Jesus the healer is only one-half of the Christian dispensation," she said.

Chittister said the church itself has "become more committed to ensuring privileges, to hiding church scandals, to tolerating church corruption than it is to exploring new and theological questions like priestly celibacy or clericalism or sexism or accountability, all of which strike at the very meaning of 'church.' We have ignored the question of what it means to be a real community in a church when less than 1% of the body purports to control the other 99%, its lay population, with no input from them at all theologically. The church has forgotten the kind of genuine pastoring Pope Francis calls 'shepherds smelling of the sheep.' " 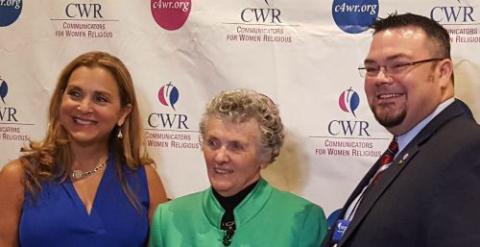 Instead, "the visible church lives in bishops' palaces in the style they have become accustomed, far from the people and even farther from the prophets of the street," she said. "We have watched the bishops of the church become sanctuaries for pedophile clerics rather than sanctuaries for undocumented aliens. And if we have a heart and soul at all, we have been saddened, actually sickened, totally shattered by it, while their victims were shattered for life. In the midst of it, I have heard too many Christians go silent in both the church and state in the face of moral, ecclesiastical, economic and political collapse."

Chittister wrote her most recent book, The Time is Now, she said, "because I could not bear the roar of the silence any longer."

Choice takes three forms, she said. The first is avoidance and to withdraw from the fray. The second is submission and passive acceptance, to not talk about religion or politics or immigration and "become part of the great enabling silence."

The third is to be prophetic, to refuse to accept the status quo. "This prophetic choice says 'no' to anything that ignores the will of God or God's creation."

In response to a question about changes in religious life, she noted that many women religious communities in the United States began as ministries to immigrant populations. The declining numbers mean only that the mission has been accomplished: Schools, colleges, hospitals and clinics have been built and are being turned over to lay leadership.

Something new is emerging that is not yet clear, but Chittister said she finds nothing alarming in the change, noting that religious congregations began with just a few women.