Grace from the rearview mirror 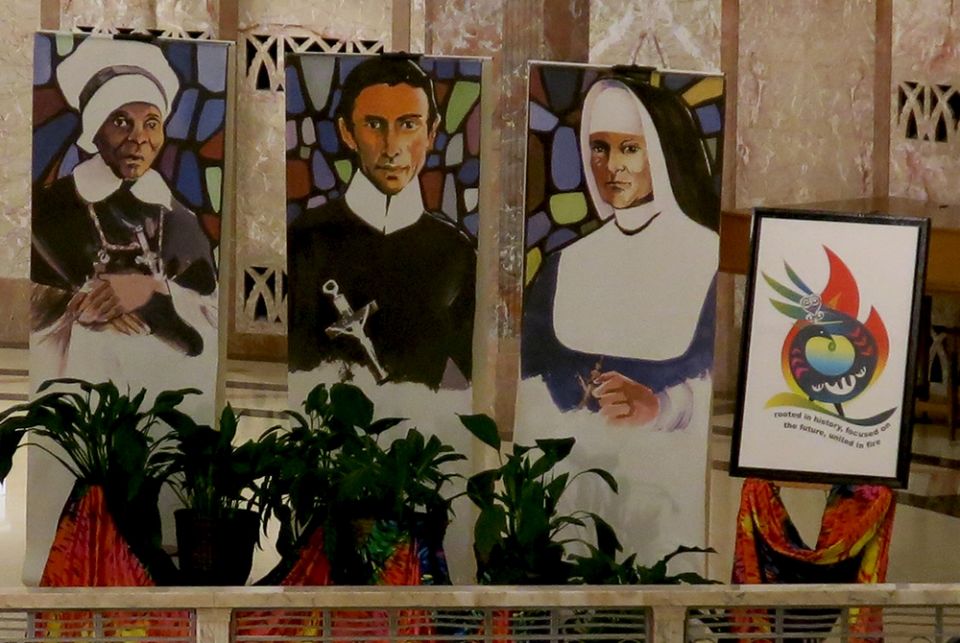 Banners portraying Mother Mary Lange, founder of the Oblate Sisters of Providence, Redemptorist Fr. Louis Gillet and Mother Theresa Maxis Duchemin, founders of the Sisters, Servants of the Immaculate Heart of Mary, were on display during the closing Mass of the 175th anniversary celebration of the founding of the Immaculate Heart of Mary order. (Courtesy of the IHM Communication Office of Monroe)

"Sometimes grace is most evident in the rearview mirror." So said Cardinal Joseph Tobin of Newark, New Jersey, in his homily during the July 11 liturgy that concluded the 175th anniversary celebration of the founding of the Sisters, Servants of the Immaculate Heart of Mary. Tobin, a Redemptorist, was educated by the order, and has three Immaculate Heart aunts in his family. He noted the meaning of the Sankofa bird (featured in the banner above) which symbolized the event: a mythical African creature with its feet firmly planted forward and its head turned backward, symbolizing the importance of learning from the past as one moves toward the future.

The commemoration itself — delayed a year because of the COVID-19 pandemic — was a powerful combination of joyful celebration and serious reflection, acknowledging both the contributions of the sisters to church and U.S. history, and their own rootedness in a history of racial complexity that is so inextricably a part of the American past.

The weekend brought together leaders of the three Immaculate Heart congregations — Monroe (1845), Michigan, and Immaculata (1858) and Scranton (1871), Pennsylvania — who trace their roots to 1845. It also included Baltimore's Oblate Sisters of Providence (founded in 1829), the first religious community of women of African descent, and the initial home of the original two Immaculate Heart founding members, Theresa Maxis Duchemin and Ann Constance Schaaff. These women, whose light skin enabled them to "pass" as they moved from Maryland to Michigan and who are responsible for three foundations that are and always have been almost entirely white, initiated a religious journey that is only now being acknowledged in all its messiness.

While the Oblate origins of the Sisters, Servants of the Immaculate Heart of Mary were identified as early as the centennial history of the Monroe community, only the Scranton community has always lauded Mother Theresa as founder. For a long time, both Michigan and Immaculata obscured her role — and certainly her racial identity — and instead identified Fr. Louis Gillet (a Redemptorist who was only present for a few years at the community's beginnings) as "founder."

Not until the sesquicentennial year (1995) were Oblate Sisters invited to participate in Immaculate Heart of Mary gatherings. Since then, there has been an OSP-IHM union of collaboration and mutual commitment, focusing on prayer, racial healing, and cooperative ministry in Haiti, Mother Theresa's ancestral home. But the celebration this July was the first in which Mother Mary Lange, founder of the Oblates, was given equal pride of place with Theresa as a foremother of all the communities.

The weekend began with a dramatic portrayal of an imagined dialogue between Mother Lange and Mother Theresa in heaven, and the roles of both women were emphasized throughout the gathering. "It was such a blessing to see Mother Lange's portrait alongside those of Mother Theresa and Father Gillet at all the main events of the celebration, including the Mass," exclaimed Sr. Rita Michelle Proctor, Oblate superior general. "There is still something of a gap between us, but the events of this weekend laid the foundation for a stronger bridge between us," she continued. "What a Spirit-filled weekend it was, focusing on relationship and not difference!"

3 Presidents of the four communities.jpg 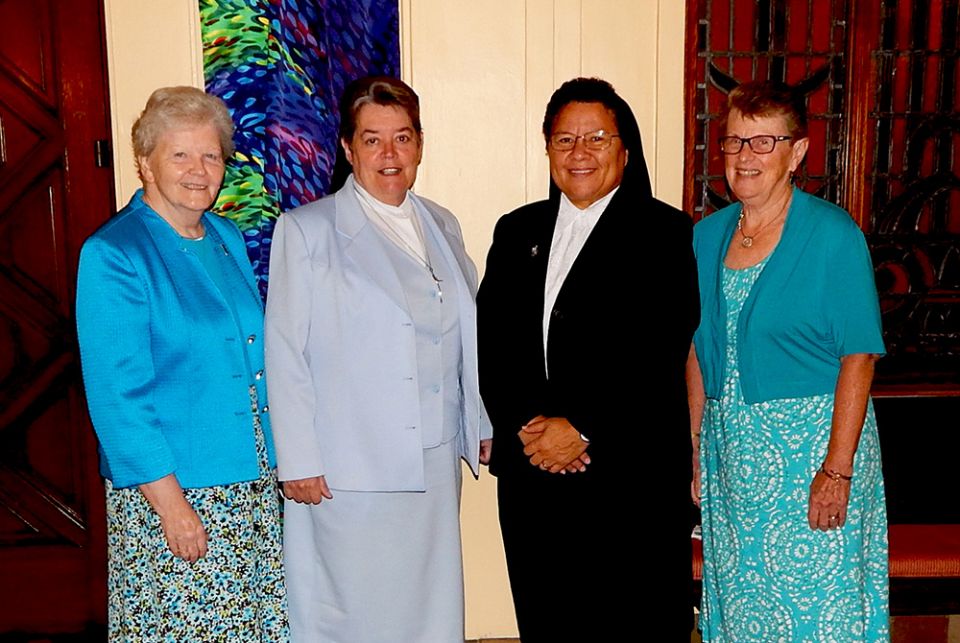 Leaders of all four congregations gathered in person in Monroe, and members from all the communities cooperated in the planning and facilitating of what transpired. Jeannine Hill Fletcher, a theology professor at Fordham, gave a series of plenary talks that explored the intersections of the Immaculate Heart of Mary history with the roles of racism in both church and society during the past two centuries.

As Fletcher put it, "our aim was to look at the story of the foundresses of OSP-IHM through the lens of racial justice and to consider how they negotiated the racial projects of their day as a way of fueling our commitments to racial justice today." Throughout the gathering, her remarks were interwoven with small-group discussions that intentionally brought members of all four communities together.

Sr. Fran Fasolka of Scranton clearly was moved by what was revealed, and she and many others were troubled at how much of the past was unfamiliar to them. "I am dismayed to know the Catholic Church's centuries-old participation in this oppression," she reflected. "I am deeply ashamed of my own both deliberate and unknowing participation in systemic racism. … I can no longer be complacent and I eagerly look toward the collaborative work of our four congregations to eradicate racial hatred and injustice."

As Monroe IHM associate John Cavanaugh put it: "The two days provided an opportunity to reflect on the ways that the suppression of the true history of the OSP-IHM relationship resulted in exacerbating the problem of racism rather than finding a solution for it. What happens next? Will we just continue to intellectualize the issues or will we create a new, more deeply interrelated and collaborative future?"

And Annmarie Sanders, a Scranton sister, declared: "I came away from the anniversary event inspired by the commitment we all share to creating a world where diversity is honored and treasured. Eradicating racism is hard work, and I found strength to continue our efforts knowing that our four congregations are in this together."

While there were limitations because the event was largely virtual, participants acknowledged that their experience with Zoom and other technologies made it easier to get a lot out of the events. Sr. Jane Herb, president of the Monroe community, who begins her year as LCWR president next month, noted unqualifiedly that "gathering for the 175th anniversary of our founding, even in a virtual environment, was a gift."

Meanwhile, Immaculata Sr. Bernadette Taraschi, who participated from her mission in Peru, recognized that she would not have been able to participate if it wasn´t Zoomed: "It was nice to connect to IHMs from around the world." However, she acknowledged that "the tradeoff is the social aspect. We couldn't have the party gathering or share meals together in person. Also, being there in person allows me to meet new IHMs and have more time with them."

Sister Bernadette wasn't the only participant joining in from abroad. Susan Rakoczy, a Monroe sister and theology professor in South Africa, reflected that systemic racism is not an exclusively American problem by any means: "For me, the celebrations were a time of graced remembrance and commitment as women religious of the four congregations to a new future marked by healing and efforts towards engagement with the systemic racism of American society. I live in South Africa and systemic racism is in the DNA of the country. As we celebrated the liturgy on Sunday the country was beginning to experience days of protests and looting, with many deaths and thousands of livelihoods destroyed."

As the weekend came to an end, Immaculata Sr. Marie Claire Matsinger spoke for many when she said:

"I am excited to begin 'a new chapter' in my life's story, personally and communally. … I've been drawn more deeply into the pioneering spirit of Mother Theresa Maxis and Mother Mary Lange and their urgency to break out of the restrictions and limitations of the racial project of their times. … Inspired by the song at the closing ritual ["A New Chapter," by Earth Mama], I feel 'anointed' anew to 'travel on together, stronger and wiser, with a history richer than we had alone — with gratitude, and humility.' " 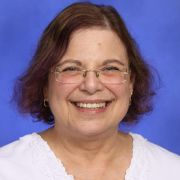 Margaret Susan Thompson is a professor of history at Syracuse University. She is a scholar of the history of women's religious life and has published and spoken extensively on the history of American sisters. She is an associate with the Sisters, Servants of the Immaculate Heart of Mary of Monroe, Michigan.