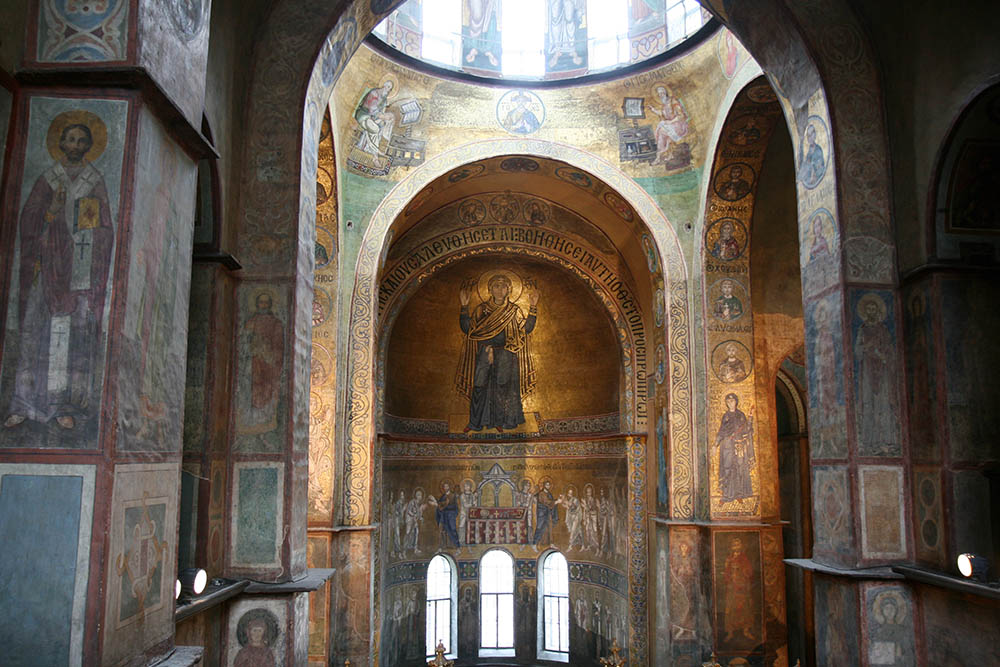 The Mother of God Oranta from the vault of St. Sophia Cathedral in Kyiv, Ukraine (Wikimedia Commons/A-bg78)

Editor's note: The current situation in Ukraine has stimulated interest by Catholic sisters writing about their communities and experiences in that country. Today, we present another in that series.

It is Monday, Feb. 21, 2022. I am trying to finish the next issue of the Intercultural Newsletter of our Basilian Order, and planning my meeting with a research director next week, in spite of the fact that the future is so uncertain. I am based in Croatia now, but all my thoughts and prayers are focused on Ukraine, where my family lives, as well as a third of the sisters of the Order of St. Basil the Great to which I belong.

On Feb. 12, we held a prayer meeting on the Zoom platform, at which the Basilian Sisters from Australia, America, Argentina, Slovakia, Poland, Romania and Croatia prayed for peace in Ukraine. At the end, the sisters from Ukraine had the opportunity to testify about how they feel now.

We were surprised to hear them reply that they are not afraid, that they are ready to stay with their people until the end and share their fate. The testimonies of the sisters were so peaceful: They said they wanted to be a hope for those among whom they serve. People in Ukraine are trying to live on, despite the threat that looms over them.

These days, I think a lot about what it means for me to be a Ukrainian religious. I was born in 1986 in the west of Ukraine. The year before, the genius Ukrainian poet Vasyl Stus — who was predicted to win the Nobel Prize — died in the Soviet camps. My first years of conscious life came as Ukraine was gaining independence, and the Catholic Church was coming out of the underground.

The enthusiasm of adults, churches full of worshipers, blue and yellow Ukrainian flags were among my earliest memories. As a child, I heard adults constantly talking about Ukraine, about the political situation, worried about injustice and wanting to strive for the best.

I remember my grandfather's stories about how their family was quite wealthy, but with the arrival of the Bolsheviks, their property was confiscated. His father died at age 40, and his mother was forced to go to work in eastern Ukraine, so my grandfather was left alone at 13 and had to build his own life.

I was in school when I learned that the Zbruch River near my village was the border between the Soviet Union and Poland until 1939. We learned that during the famine of 1932-33, starving parents in despair threw their children across the border to save their lives. Many of my fellow villagers survived exile in Siberia.

Since childhood, remembering Ukraine and praying for it have been among my highest values. Perhaps it is no coincidence that my first poem, written at the age of 11, was about Ukraine, about war and prayer.

In 2004, when I was studying in Kyiv National University, the so-called Orange Revolution began. Although it turned out to be peaceful, in fact, we didn't know it then: As students, we went to the Square (Maidan) of Independence every day, where we stood for hours supporting the protest, and helped prepare and distribute food to other protesters.

I remember the unity that prevailed among complete strangers in Kyiv at that time: If you slipped on a winter street, several hands picked you up at once. I remember once walking on the Maidan, exhausted, when I stumbled upon the tent of the Ukrainian Catholic University, where a liturgy was taking place. That moment gave me strength: It was for me like the tent of God's ark, God's presence among my people.

In 2014, during the Revolution of Dignity, I was already living in a monastery in Croatia, but all my thoughts were again in Ukraine. I could not watch local television, which was full of ambiguous interpretations of events. The day of Feb. 20, 2014, was the hardest: It was then that peaceful protesters were shot on the Maidan. Each time I checked the news, there were more and more killed, and by the evening, it had reached 100 — the "Heavenly Hundred," as they are honored in Ukraine today.

Recently, an acquaintance of mine who has lived in Ukraine for a long time told me that Ukrainians give the impression that they do not know what they want. I can argue that the fact that Ukrainians survived centuries of war, persecution, repression, famine is a miracle.

Ukraine is gradually resurrecting. Working in 2017 and 2019 in our mission in Kyiv, the capital of Ukraine, I was impressed by the number of changes that are taking place. Children who came to Sunday school spoke Ukrainian. This was a miracle for me, because for many years the Ukrainian language was banned in Ukraine — even expelled from public schools — so even today, due to the legacy of past bans, many people in Ukraine speak Russian.

As for me, the most symbolic change took place in St. Sophia Cathedral, a church built in the 11th century when Ukraine accepted Christianity. For many years during communism and even after, this ancient church remained empty: Visitors came here as you would to a museum, and an impressive wasteland gaped at the site of the altar.

Now, the services in St. Sophia have resumed, and it was here that the prayer of representatives of different religions for peace took place on Feb. 16, 2022. The Mother of God Oranta from the vault of the cathedral embraces Ukraine, the people, all mankind, as if to say: "Do not be afraid. God is with us."

Read this next: In Ukraine and beyond, life as a Basilian Sister has opened me to other cultures
This story appears in the War in Ukraine feature series. View the full series.