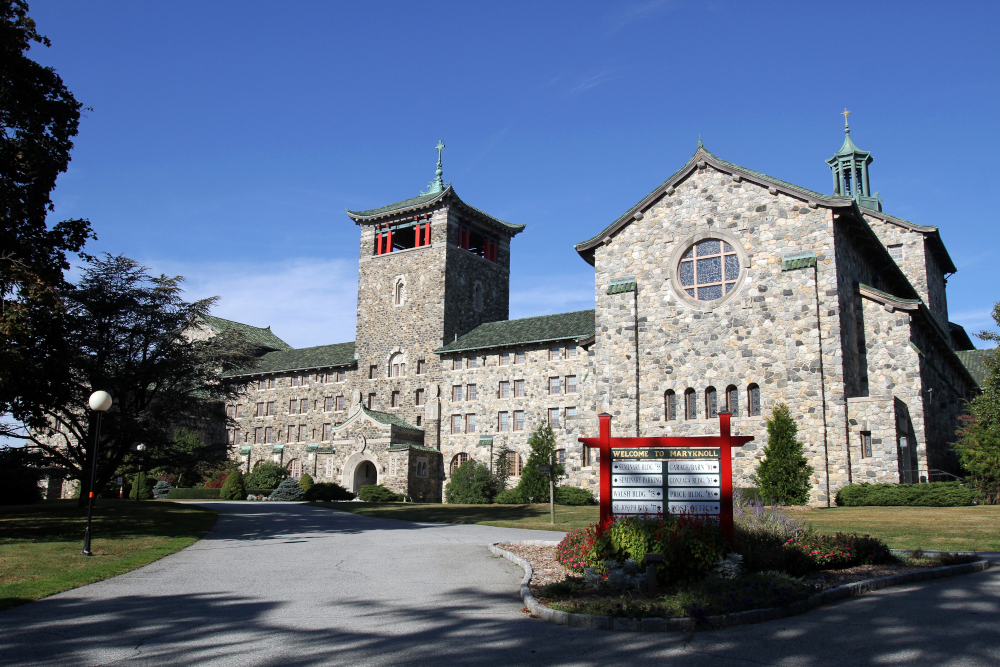 The Maryknoll Society Center in Ossining, N.Y., is seen in this 2014 file photo. The Maryknoll religious community has been hit hard by COVID-19, the illness caused by the coronavirus, with at least one priest and three women religious reported to have died of the illness during the month of April. (CNS/Gregory A. Shemitz)

The Maryknoll religious community in Ossining, New York, has been hit hard by COVID-19, the illness caused by the coronavirus.

At least one priest and three women religious have died of the illness during the month of April. Dozens more have been diagnosed or suspected of having the coronavirus.

He said the first priest who died was 92 and was the only one of the nine who tested positive for the virus. The others who had died showed symptoms that indicated they had the illness, but not all of them had been tested and those that were had not received their results, the congregational leader said.

The Maryknoll Sisters announced April 20 that three sisters died of COVID-19. Another 24 sisters have tested positive for the coronavirus and have been temporarily transferred to another care facility for treatment, the order said in a news release.

In addition, eight of the congregation's staff members also have tested positive for the illness. Other sisters who have low-grade fevers have been isolated in the order's health care facility and are being closely monitored by medical staff, the congregation said.

Finch said the ages of the men who died ranged from the upper 80s to the lower 90s and had been ordained for more than 50 years. In all, 120 men live at the order's residential facility, he said.

About 18 men, in their 60s and 70s, also have shown minor symptoms of the disease and have been isolated, Finch added.

"All you need is a sniffle and you're treated. But the younger men are isolated and doing OK," he told CNS April 21.

Finch credited the order's health care staff for being on top of the situation in trying times.

"They're very aware of keeping people separated, very aware of not being cross contagious. They're doing a very wonderful job, but the reality is this thing spreads very quickly," he said.

In the Archdiocese of Boston, retired Auxiliary Bishop Emilio Allue, 85, is reportedly extremely ill with complications from COVID-19.

The archdiocese did not confirm the report in order to protect the bishop's privacy. A spokesman said that the archdiocese, Cardinal Sean P. O'Malley and clergy were "praying for Bishop Allue, who is facing a serious illness at this time."

Massachusetts has emerged as a hot spot of COVID-19 cases.

Meanwhile, Regina Cleri, a residence for retired priests in the Archdiocese of St. Louis, reported nine confirmed cases of COVID-19 among its 30 residents.

Officials at the residence said they are following guidelines developed by the Center for Clinical Standards and the U.S. Department of Health and Human Services to protect residents. Visitors and nonessential personnel have been restricted at the facility.

The Dominican Sisters of Adrian, Michigan, reported that one of the congregation's members who lives in metropolitan Detroit, a hot spot for the coronavirus, had contracted the virus, but has since recovered.

Elsewhere, the Sisters of the Holy Names of Jesus and Mary U.S.-Canada province have taken to praying specifically for people stricken by the illness.

Jennifer Brandlon, director of communications for the order's U.S.-Canada province, told CNS April 21 that no sisters in the province had contracted COVID-19.

"Our congregation has been blessed with good fortune and good health," she said. "We have had no known cases among the sisters living independently or in facilities. That is also the case for our members in Washington, California, New York, Florida and Ontario."

"The sisters are focused on what this pandemic has done to the least in our society," Brandlon added. "They have daily email with prayers for one another and for people we have heard about. That also includes the prayers of people who have contacted from outside the community to ask the sisters to pray for someone they love."

(Contributing to this story was Jennifer Brinker, a staff writer for the St. Louis Review and Catholic St. Louis, the newspaper and magazine, respectively, of the Archdiocese of St. Louis.)

(This story has been updated with more information on April 22, 1 pm ET)