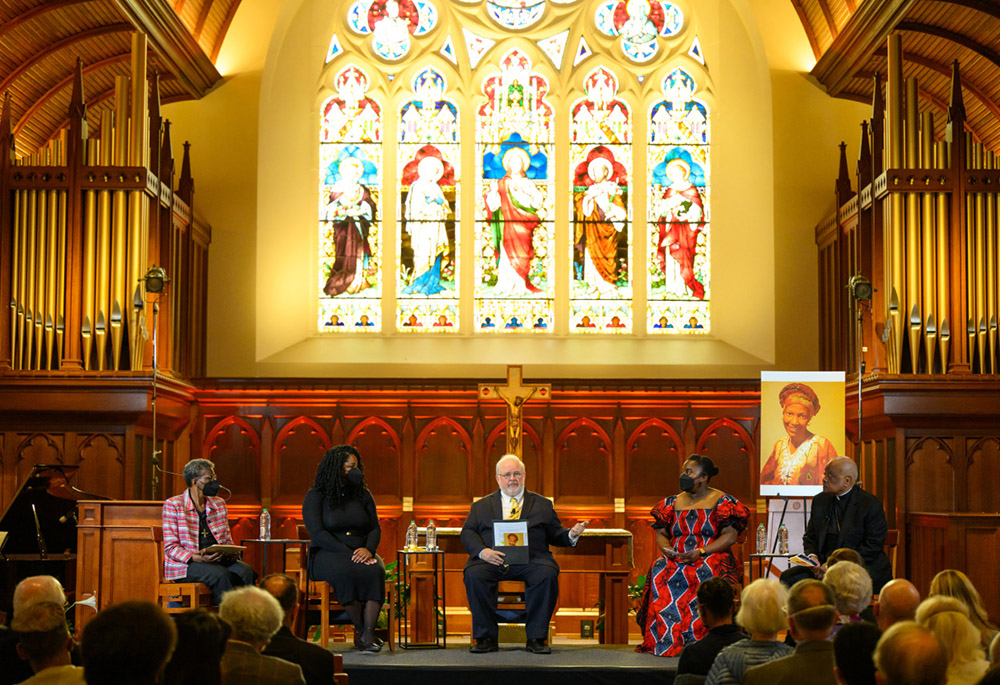 From left: Sr. Patricia Chappell of the Sisters of Notre Dame de Namur; history professor Shannen Dee Williams, author of a book on Black sisters; moderator John Carr; Ogechi Akalegbere, the 2021 winner of the Cardinal Bernardin New Leadership Award; and Cardinal Wilton Gregory, archbishop of Washington, participate in a panel discussion May 3 at Georgetown University on the life of Sr. Thea Bowman after a chapel there was renamed in her honor. (Courtesy of Georgetown University/Rafael Suanes)

A chapel at the oldest Jesuit university in the United States is now named for Servant of God Sr. Thea Bowman instead of a priest who once fought in the Confederate army.

Georgetown University on May 3 renamed the chapel in Copley Hall for Bowman, who was a Franciscan Sister of Perpetual Adoration and is on the path to sainthood. The chapel was originally named the Cowardin Chapel of St. William for Jesuit Fr. William Reynolds Cowardin, who as a teen fought for the South in the Civil War and later was a student, professor and chaplain at Georgetown.

The chapel, now known as the Servant of God Sr. Thea Bowman Chapel of St. William, is a consecrated Catholic chapel but is generally the spiritual home of Georgetown's Protestant community and, lately, of services for many faiths.

After the renaming ceremony, the university's Office of Mission and Ministry and the Initiative on Catholic Social Thought and Public Life hosted a Dahlgren Dialogue on Bowman, her legacy and the lessons she teaches us today. Bowman died of cancer in 1990 at age 52.

The panel discussion featured Sr. Patricia Chappell, the moderator of the leadership team for the Sisters of Notre Dame de Namur U.S. East-West Province, a former president of the National Black Sisters' Conference and the former executive director of Pax Christi USA; Cardinal Wilton Gregory, archbishop of Washington and a former president of the U.S. Conference of Catholic Bishops; Shannen Dee Williams, a history professor at the University of Dayton, Ohio, and author of Subversive Habits: Black Catholic Nuns in the Long African American Freedom Struggle; and Ogechi Akalegbere, the 2021 winner of the Cardinal Bernardin New Leadership Award from the Catholic Campaign for Human Development and the Christian service coordinator at Connelly School of the Holy Child in Potomac, Maryland. A recording of the discussion can be viewed on YouTube.

Moderator John Carr began the discussion, which drew about 150 people in person and more than 1,000 livestream viewers, by noting that nearby Isaac Hawkins Hall was originally named for Jesuit Fr. Thomas Mulledy, who in 1838 arranged for the sale of 272 humans enslaved by the Jesuits at Georgetown to plantations in southern Maryland and used the proceeds to retire college debt. In 2017, the building was renamed for Isaac Hawkins, the first name on the bill of sale.

"I want to set that context of honoring this brave, holy woman in this place that is stained by that history. Because that is not just Georgetown's history, that is not just the church's history. That is our nation's history, that is our history, our original sin and an open wound in our society," said Carr, founder and co-director of the Initiative on Catholic Social Thought and Public Life. "So I tell this particular story about this particular place on this particular day because this woman can help us understand — understand what happened, what needs to happen."

Chappell said the only way to truly continue Bowman's work is to change the value systems in our society. Those systems, which are Eurocentric, keep racism alive, she said. 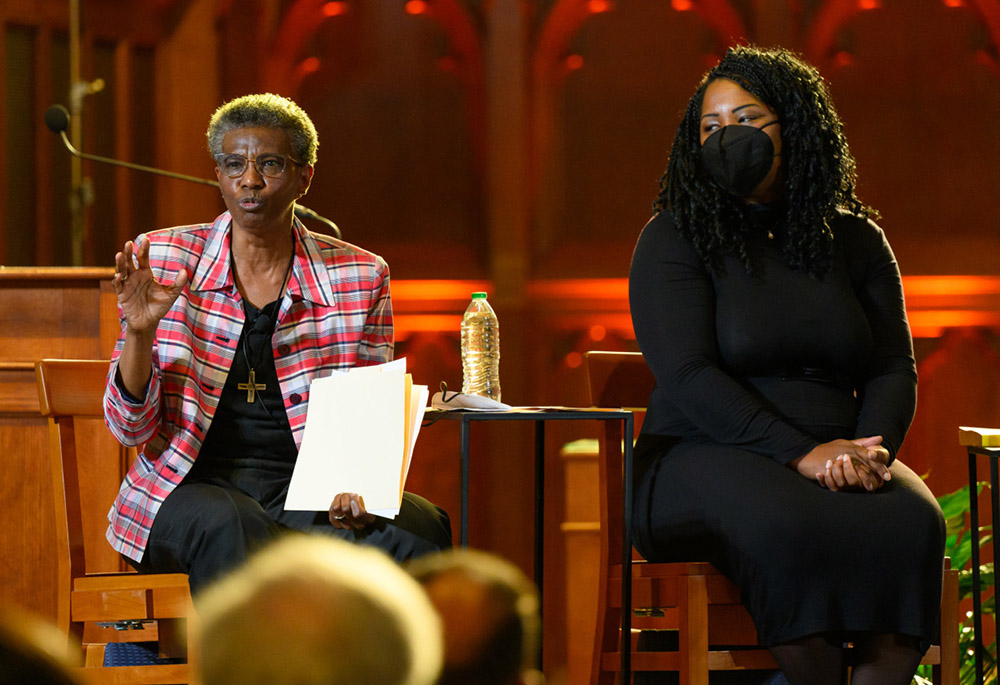 Sr. Patricia Chappell, left, of the Sisters of Notre Dame de Namur and history professor Shannen Dee Williams, author of a book on Black sisters, participate in a panel discussion May 3 at Georgetown University on the life of Sr. Thea Bowman after a chapel there was renamed in her honor. (Courtesy of Georgetown University/Rafael Suanes)

Williams said Bowman's life should remind us that while a few civil rights leaders received widespread attention, thousands of other people also did the work of desegregation, such as Black sisters who desegregated white religious communities and their convents, hospitals and ministries, often in towns with racist laws on the books "and without the protection of news cameras."

Akalegbere said Bowman showed the importance of community, even though community can often be part of the problem.

"Some of the people that have harmed me the most are those that I should have called brothers and sisters in Christ," Akalegbere said.

Bowman also showed Akalegbere that she can be her full, authentic self.

"Sister Thea gives me both hope and visibility at a time when I felt invisible," she said. "I can be female, Black, Catholic, immigrant — all the things that I am."

Gregory said Bowman would be especially happy that the chapel named for her is used for ecumenical services.

"Naming that chapel after Sister Thea says in so many ways that there's a big welcome sign on the front of that chapel," Gregory said. "Having her name on that chapel, knowing that people will gather to worship in other traditions there, she'd be very proud of that. Very."