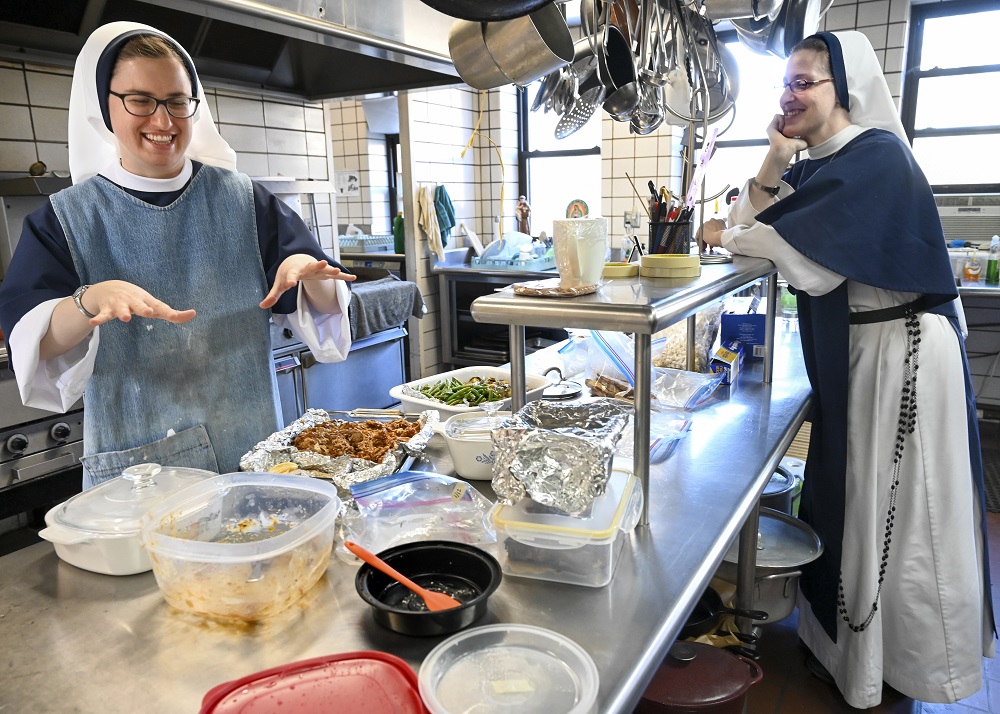 Sister Madeleine, left, works in the kitchen as she laughs with Sister Monica Marie on Jan. 15 at St. Anthony's Convent of the Sisters of Life in Catskill, New York. (CNS/The Evangelist/Cindy Schultz)

In the kitchen of St. Anthony's Convent, the Sisters of Life gathered around the stainless steel countertops to discuss a vital issue: How do you cook bison?

"We live by donations and someone donated bison, of all things," said Sister Madeleine Agnes, who sported a jean-styled kitchen apron over her typical navy blue and white habit, signifying it was her turn to cook dinner. She was preparing bison burgers.

"It's just like ground beef," Sister Madeleine assured the group.

In the back, Sister Brigid Ancilla Marie, superior of the convent, checked on things in the kitchen while Sister Monica left the bison to grab a cup of coffee. The women chatted while Sister Madeleine prepped dinner. Her brown rosary beads — almost 4 feet long and hanging from her habit — jingled as she moved.

It was a typical Saturday afternoon for the Sisters of Life: congregating in the kitchen to chat on their breaks or unload from the day.

The sunshine from the bright January day filled the kitchen, and there was an easiness in the room that felt like you were at home with your own sister. Someone you can talk to over tea or bother with the tedious parts of your day.

It's that feeling of support and love that only comes from maternal love, and it's a love so potent in these women that it fills the room like a sweet perfume.

It's the same love the Sisters of Life are eager to bring to the Catskills in the Diocese of Albany in their newly acquired convent.

After over 100 years in the area, the Franciscan Friars of the Province of the Immaculate Conception left the St. Anthony Friary in Catskill to the Sisters of Life, who have entered into a long-term lease of the property.

"All of our guys had gone through Catskill one way or another, so there's an emotional involvement [to the building]," said Franciscan Father Joseph Lorenzo, the province's provincial secretary, told The Evangelist, Albany's diocesan newspaper.

"When we heard about the sisters looking for property up there, it was very attractive because we didn't want to see the building razed. So we were happy with the sisters coming up here," he said.

In August of last year, Father Paul Guido, temporary administrator, turned over the keys of the St. Anthony Friary to Mother Agnes Mary Donovan, superior general of the Sisters of Life, at a Mass celebrated in the chapel.

In turn, Mother Agnes gave the keys to Sister Brigid, the new superior of what is now the St. Anthony's Convent.

While based mostly in the Northeast, the Sisters of Life also have members in Philadelphia, Toronto, Washington, Denver, Phoenix and Stamford, Connecticut. In Catskill, the sisters are preparing the convent for four more sisters moving from Stamford.

"I knew there was a peace and joy out of [this move]," said Sister Brigid, 39, who moved from the Visitation Convent in the New York borough of Manhattan. "No matter what path we take, it's a call to love. My heart was made for God's love and ... with the Lord, you have that reassurance."

Formed in 1991 by the late Cardinal John O'Connor of New York, the Sisters of Life community was born with a specific call in mind: to protect and support the dignity of human life.

In addition to the traditional vows of poverty, chastity and obedience, the sisters take a fourth vow "to protect and enhance the sacredness of human life." A key to everything the sisters do — in their prayers, their volunteering and their work to support life — is that it's all done in a way of nurturing, maternal love.

"Everything we do is adhered to upholding the beauty of God and life," Sister Brigid said.

"There's nothing to take away from the fact that God loves you, nothing can take away from that," Sister Monica added. "No sin is too great, no failure, nothing. And to uphold that truth often before a soul that is very much living despite that truth is so powerful."

It's a motto that seems to resonate with a number of women, particularly millennial women. At a time when many orders find their numbers on the decline, the Sisters of Life are the opposite.

In June, five novices of the Sisters of Life professed their first vows at Sacred Heart Church in Suffern, New York. A month later, six postulants received the holy habit and a new religious name. Then, in early August, six sisters professed their final vows at St. Patrick's Cathedral, including Sister Cara Marie, 34, who moved to Catskill after her profession.

For these young sisters, it's what they were called to do: "It's a profound mystery, our lives, when you stop and think about it," Sister Monica said. "It's deep." 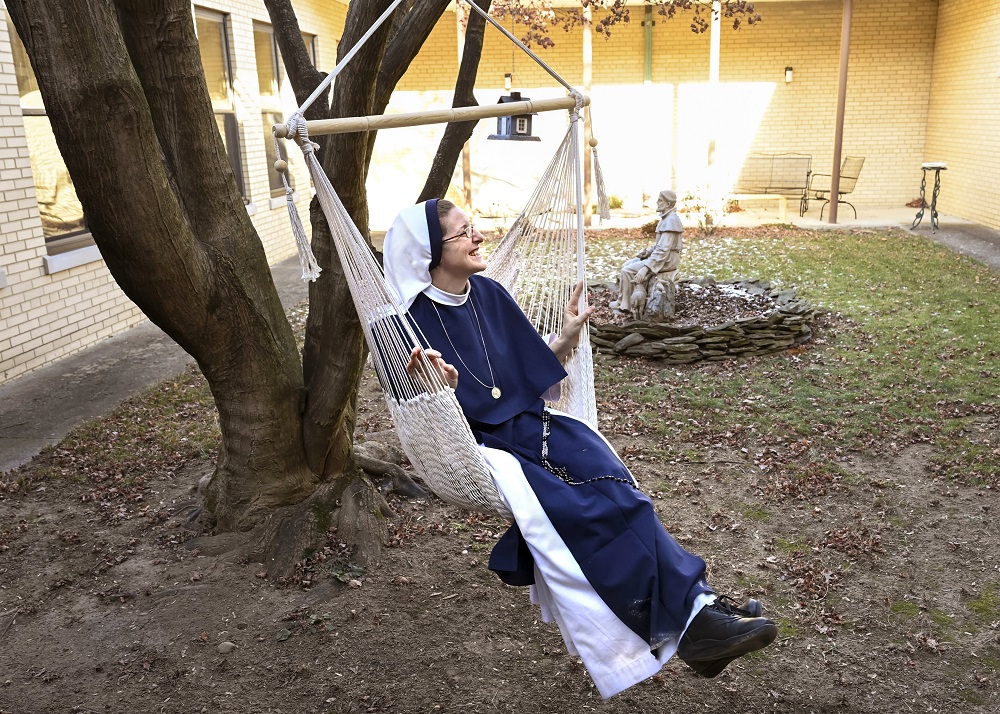 Sister Monica Marie takes a swing in a rope chair Jan. 15 in the courtyard at St. Anthony's Convent of the Sisters of Life in Catskill, New York. (CNS/The Evangelist/Cindy Schultz)

Most women in the St. Anthony's Convent are in their 30s, an unheard-of number to so many other orders. Sister Brigid believes it may speak to the importance of their mission.

"I think it says something timely about our charism," Sister Brigid said, "that the Lord is calling and raising the vocation for this particular work."

The Sisters of Life also are trailblazers for the next generation of women religious.

"There is a poverty in our newness in that we don't have all those sisters who have lived this life for years before us," Sister Brigid said. "It's beautiful because it's such a young, vibrant community but we also don't have the gift of those who have come before us, and we're going to be that for our younger sisters now."

Every sister has their own vocation story, but everyone has to answer the same call: to use their love for a higher purpose

The Sisters of Life offer assistance with crisis pregnancies through housing, counseling and emotional support. The community also offers post-abortion retreats and assistance for women.

Based out of St. Andrew's Center in New York City, the community runs a Visitation Mission that serves women experiencing a crisis pregnancy or seeking emotional or practical resources for pregnancy or motherhood.

Above all though, the Sisters of Life focus on prayer. The sisters each pray four hours a day in common prayer centered around the Eucharist, and reserve one day a week solely to focus on prayer.

Unlike their other ministries, which have more tangible and physical elements, the impact of prayer is just as — if not more — important than all the other sisters' duties.

"We lay everything down," Sister Brigid said. "Our prayers actually focus more on our relationship with the Lord, but then through our religious consecration and vows, there's another reality happening so everything we do through consecration is lifted up through that prism for that focus.

"Our life is given so no matter what we're doing, it's the offering of our hearts to the Father for life."

Related: Q & A with Sister Magdalene Teresa on supporting mothers during the COVID-19 pandemic