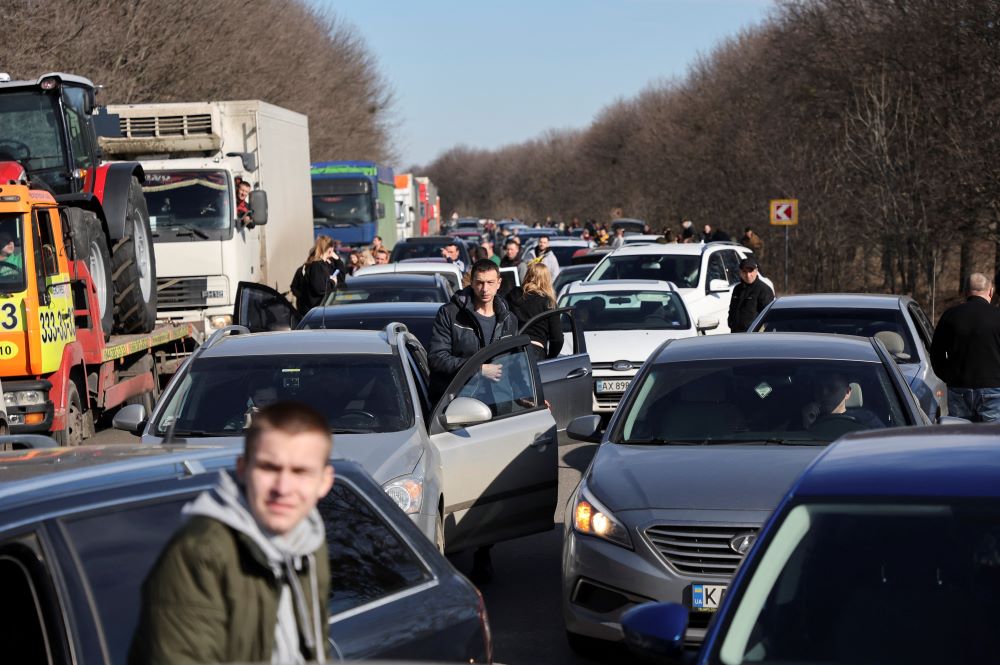 People wait in a traffic jam as they leave the city of Kharkiv, Ukraine, on Feb. 24 after Russian President Vladimir Putin authorized a military operation in Ukraine. (CNS/Reuters/Antonio Bronic)

Sisters in Ukraine, supported by women religious elsewhere in Europe and in the United States, report anxiety and fear but also resolve as Russian military forces invaded their country on Feb. 24.

Sr. Anna Andrusiv of the Sisters of the Order of St. Basil the Great told Global Sisters Report in a Feb. 24 email from Lviv, a historical city in western Ukraine that borders Poland and is home to the congregation's main convent in the country, that residents are stocking up on gasoline, cash from banks and medical supplies from local pharmacies.

Though fighting had not yet been reported in Lviv by afternoon Feb. 24, people were frightened, she said, adding that there have been some military incursions in western Ukraine, "but our soldiers are fighting back."

"It looks like the Russian aggressor wants to misinform us about what is going on in Ukraine," she added.

In the midst of such uncertainty, she and others are trying to remain calm. "We are praying," Andrusiv said.

One point of relief for Andrusiv is that a group of sisters who joined her and other religious on a peace pilgrimage to eastern Ukraine earlier in the week returned safely to the convent in Lviv, where 27 Basilian sisters live, on Feb. 24. The Feb. 22-23 pilgrimage by the religious of the Ukrainian Catholic Church was to the city of Zaporizhia, which is only about 120 miles from the occupied area of Donetsk.

Immediately after the group of religious left eastern Ukraine, "Russia began to bomb us. Can you imagine it?" Andrusiv wrote. 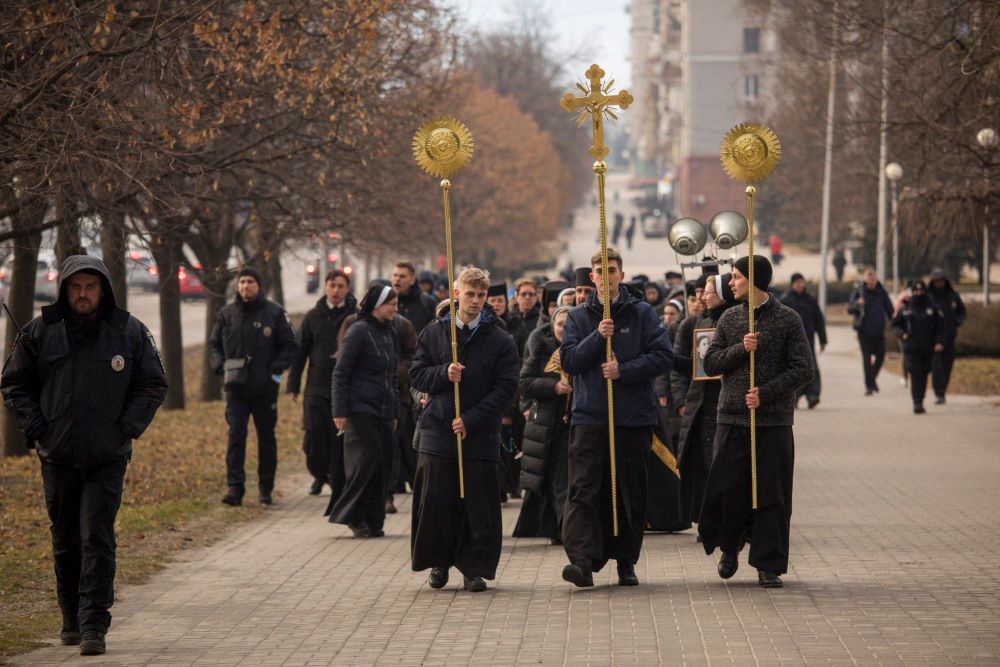 The pilgrimage of Ukrainian religious to Zaporizhia, Ukraine, on Feb. 22 (Courtesy of the Information Department of Ukrainian Greek Catholic Church/Oleksandr Savransky)

The Sisters of the Order of St. Basil the Great issued a statement Feb. 24 expressing its "deep sorrow on the invasion of Ukraine by Russia, and particularly for the loss of life and for those injured."

"This illegal, unprovoked invasion is a terrible violation of human rights and threatens to lead to unfathomable bloodshed and prolonged conflict," Sr. Joann Sosler, the provincial superior, said in the statement.

"We stand in solidarity with our brothers and sisters in Ukraine, and call upon all people of good will to support Ukraine during this crisis in whatever way they can: prayer, finances, volunteering, anything. We join with our Sisters of Saint Basil in Ukraine in praying for the people of Ukraine, and we call upon our government to support the freedom of the Ukrainian people with whatever means are available and necessary."

In another development, Adrian Dominican Sr. Durstyne "Dusty" Farnan, who represents Dominican sisters at the United Nations in New York, told GSR that after the Feb. 24 invasion, Spanish Dominican sisters who minister in the Ukrainian capital of Kyiv "have packed their things to go the Spanish Embassy for safety."

In an email Feb. 23, Andrusiv said she and her community were "very thankful" for prayers from other sisters and supporters elsewhere.

"We need those prayers. This is a difficult time for us," she said. "Every day we live but we don't know what is going to happen. A lot of us are confused and uncertain."

Andrusiv spoke of an "oncoming war," noting that while she and others "feel peace in our hearts," Ukrainians "are ready to give our life for our country, for our beliefs and for God. We are afraid, but we are also strong and we are waiting what tomorrow will bring to us."

"We [are] praying even more for peace. But we know our neighbor, and we know what he can do," she said, noting that eastern Ukraine has existed in a state of war since 2014. "We never forget about it in our prayers, for the soldiers who are fighting there and protecting our country, our Ukraine. We are one nation, we are Ukrainian people."

Another St. Basil sister, Sr. Ann Laszok, an American who is based in Pittsburgh and comes from a Ukrainian family, wrote in a Feb. 23 email to GSR that she felt "only a miracle" would deter Russian President Vladimir Putin "from trying to take over Ukraine because of his imperial goals from way back."

"Ukraine has suffered much in the past and war is brutal but Ukrainians will fight to keep their dignity, sovereignty and religious freedom."

For several days, Ukrainians had been preparing for a Russian invasion, as noted by an email from another St. Basil sister, Sr. Januaria Isyk, based in Kyiv, to Sr. Teodozija Myroslava Mostepaniuk, who is Ukrainian by birth and has family in Ukraine but now lives in Croatia.

"We are slowly preparing for the war — the war we do not want," Isyk said in the exchange.

Mostepaniuk shared that sentiment. "Nobody in Ukraine wants this war but people are ready to stay there until the end," she said of Ukrainian resolve and popular support for the Ukrainian military.

Mostepaniuk said she is putting all her "thoughts and prayers in Ukraine, where my family lives" as well as about a third of the sisters of her order.

In a Feb. 23 email to GSR, Mostepaniuk said the Russian invasion is an extension of a long and tragic history that Ukrainians feel has been "full of violence and colonial domination of Russia [over] Ukraine." This includes, she said, a genocidal famine 1932-33 under Soviet domination. 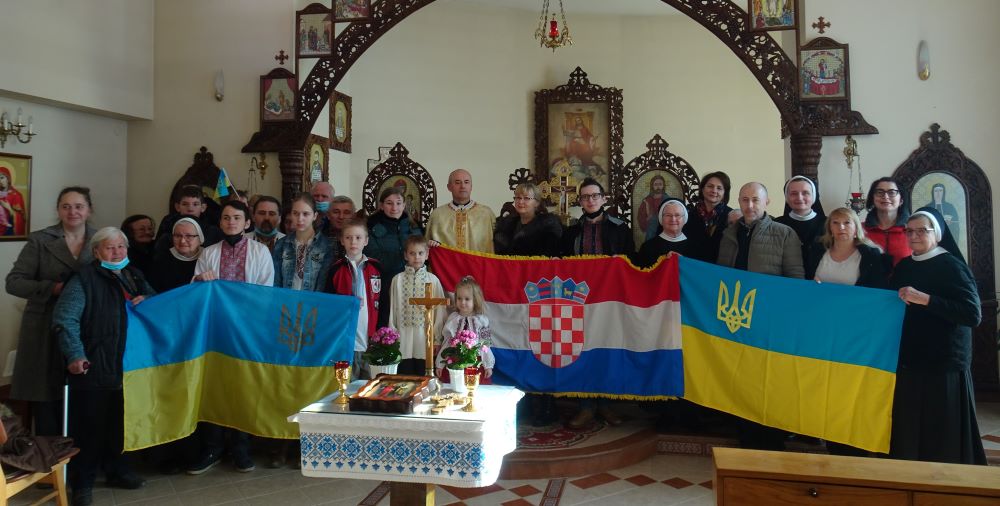 "The war we have today actually started eight years ago, in 2014, when Russia occupied Crimea and part of the Ukrainian eastern regions," Mostepaniuk said. Despite "this hard situation, now it is a possibility for Ukraine to speak about itself, about its history and identity. For millennia Ukraine has been an active participant of world history."

What gives Mostepaniuk hope in the current crisis is "the realization that the truth is on the side of Ukraine, that Ukrainians do not attack anyone, but [wish to] protect their homeland," she said.

What sustains her and others right now, Mostepaniuk said, is prayer.

"These days I usually pray the Psalms and meditate on the Book of Isaiah," she said.

Laszok said prayer is also centering her life as she watches events unfold from the United States. Knowing that people are praying for Ukraine and for peace from throughout the world is also sustaining, she said.

"We are grateful to our partners in the West. The diplomatic support of Ukraine has been unprecedented over the last few months," she said, "but in the case of full-scale war, we know that we have to count on ourselves and the help from above."

Sisters working at the United Nations watched events unfolding with alarm and even incredulity.

"I am forced to look at this flawed organization devoid of any powers to protect 'We the Peoples of Ukraine' who are confronted with the military might of President Putin and his ambitions for empire building," said Sr. Teresa Kotturan of the Sisters of Charity of Nazareth, Kentucky, who represents the Sisters of Charity Federation at the United Nations.

"The people of Ukraine are to be sacrificed to achieve his goal — erase boundaries and annihilate their identity. It is unconscionable," she said in a Feb 23 email. "Where is our humanity and solidarity?"

She added: "I am angry, dismayed and saddened; in fact powerless, for advocacy has no room in the face of arrogant military power. Instead, in solidarity with the people of Ukraine, I lift my heart in prayer, begging God to intervene. Miracles can still happen, in the guise of diplomacy." 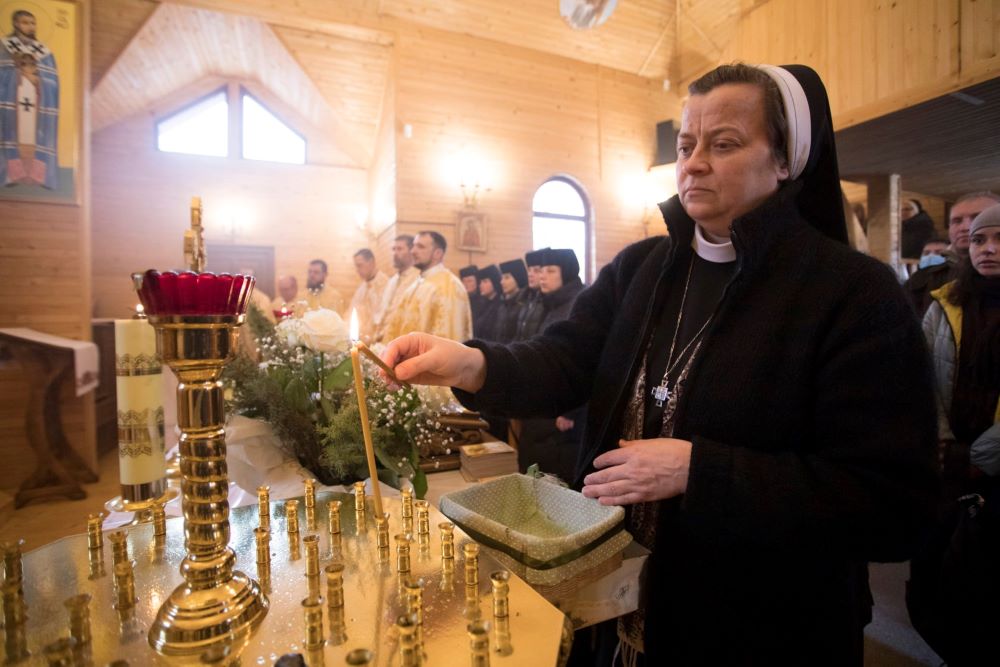 Kotturan acknowledged that is not likely to happen, however.

"World leaders have failed to bring everyone to the table for peacebuilding and conflict resolution, for all were busy with their narrow nationalistic pursuits," she said. "We do not have a leader with moral strength and courage to stand up to Putin."

"This war cry is not just against Ukraine, but the whole world. We all are culpable and will pay a price for our complicity," she said.

As one small sign of solidarity with the Ukrainian people and sisters ministering there, Farnan said the Dominicans created a button and sticker that can be used as a reminder "stating that we have family in Ukraine, like we did for Iraq, as a way to be in solidarity with our Dominican brothers and sisters in countries where there is conflict."

"We want our brothers and sisters in the Ukraine to know we are supporting them in this difficult time."

Various statements on Ukraine by religious bodies emerged prior to the Russian invasion.

On Feb. 23, the Maryknoll Office for Global Concerns issued a statement that said, "War represents a deadly failure by world leaders to build just peace and promote integral human security."

It added: "We condemn the use of violence to wage conflict, and urge the leaders of Russia, Ukraine, the United States and all NATO member states to promote nonviolent alternatives to war."

The Catholic peace advocacy group Pax Christi called for a nonviolent solution to the crisis, noting that Pope Francis designated March 2, Ash Wednesday, as a global day of prayer and fasting for peace in Ukraine.

Earlier in the week, Sean Callahan, the president and CEO of Catholic Relief Services, said the Baltimore-based international humanitarian organization "together with our partner Caritas Ukraine, stand in solidarity with the Ukrainian people and are preparing to provide assistance to civilians affected by an escalating conflict."

Callahan warned, however, that a potential "humanitarian crisis resulting from an invasion of Ukraine would completely overwhelm the capacity of the aid agencies in the region. The freezing winter temperatures, likely damage to health facilities and other vital infrastructure, and the enormity of the civilian population in harm's way, could lead to suffering on a scale we have not seen in Europe in our lifetimes," he said in a Feb. 22 statement.

That awareness of the history of war in Europe was acknowledged Feb. 24 as visitors paid their respects at the St. Nikolai Memorial in Hamburg, Germany. The memorial is on the site of the St. Nikolai Cathedral, which was largely destroyed during the 1943 Allied firebombing of Hamburg.

"No to war," a visitor from Greece wrote in a memorial guestbook. "Yes to peace."