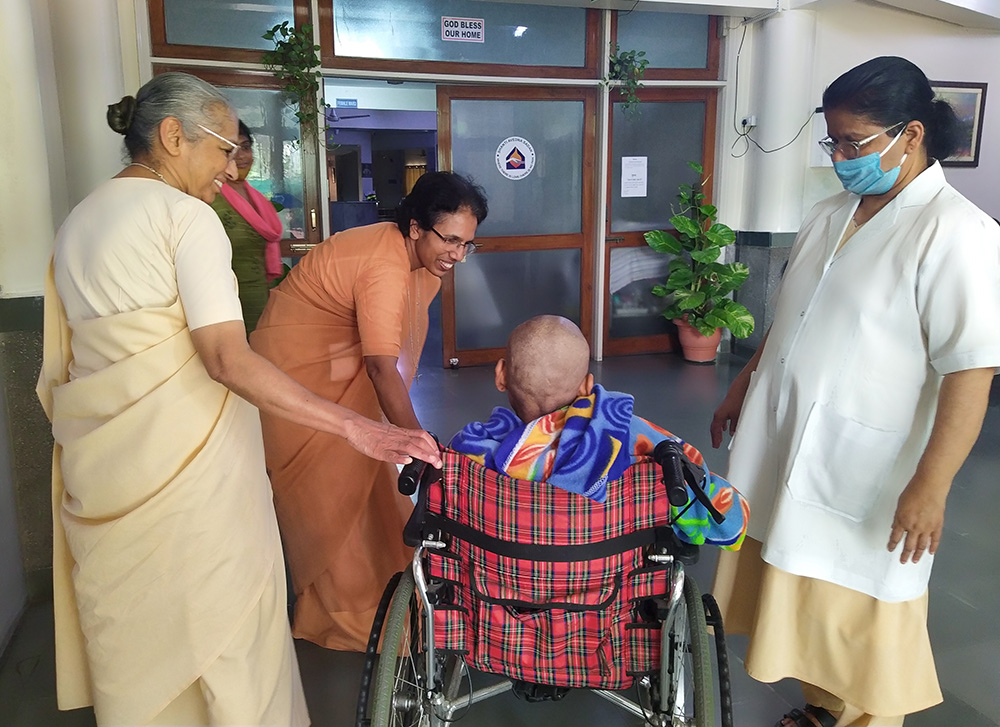 For Jaishree Sabharwal, Shanti Avedna Sadan ("Home of Painless Peace") was a heaven on Earth where some "angels" took care of her mother, a terminally ill cancer patient.

"I brought my mother here on July 22 after she was diagnosed with stage 4 cancer so that she could get 24-hour care of a hospital along with the love of a home," Sabharwal, a Hindu resident of New Delhi, told Global Sisters Report.

Her mother died Sept. 13 in the care of the Sisters of the Holy Cross of Menzingen, who manage the hospice.

"I was amazed at their care, concern and dedication. Their love spread to those under their care," Sabharwal said, who acknowledged that it was tough to attend to patients who are bedridden or in a wheelchair. "These angels do all these with a smile." 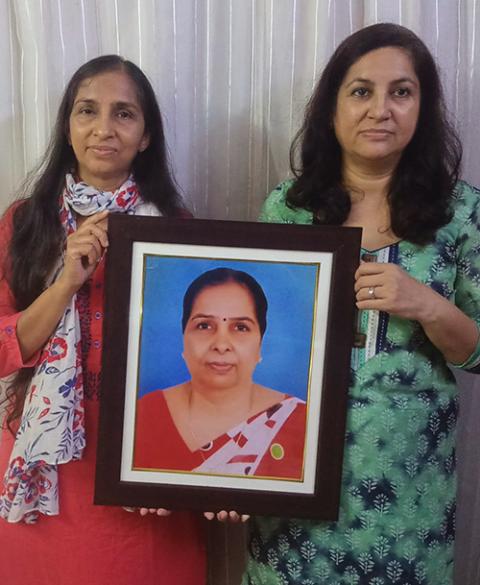 "I do not know if we are angels, but I know God has prepared us to prepare these people to go peacefully from this world and join him," the 54-year-old nun told GSR.

That was precisely the reason Luis Jose de Souza, a Catholic surgical oncologist who founded Shanti Avedna Sadan centers in Mumbai, Goa and New Delhi, chose the nuns to manage them.

Shanti Avedna Sadan in Mumbai, which opened Nov. 2, 1986, was India's first hospice to help terminally ill cancer patients in advanced stages to spend their last days in peace and love.

"We chose the Holy Cross sisters for all our three branches because only they have the dedication and love for this work," de Souza, the managing trustee of centers, told GSR. "They do it not for name, fame or gain, but only for the love of God."

He started the first hospice in Mumbai, where he works, after he was moved by the plight of the cancer patients who were sent home because of lack of space in the hospital.

Holy Cross Sr. Ancy Kottuppalli, who administers the Mumbai center, is among the organization's six trustees. 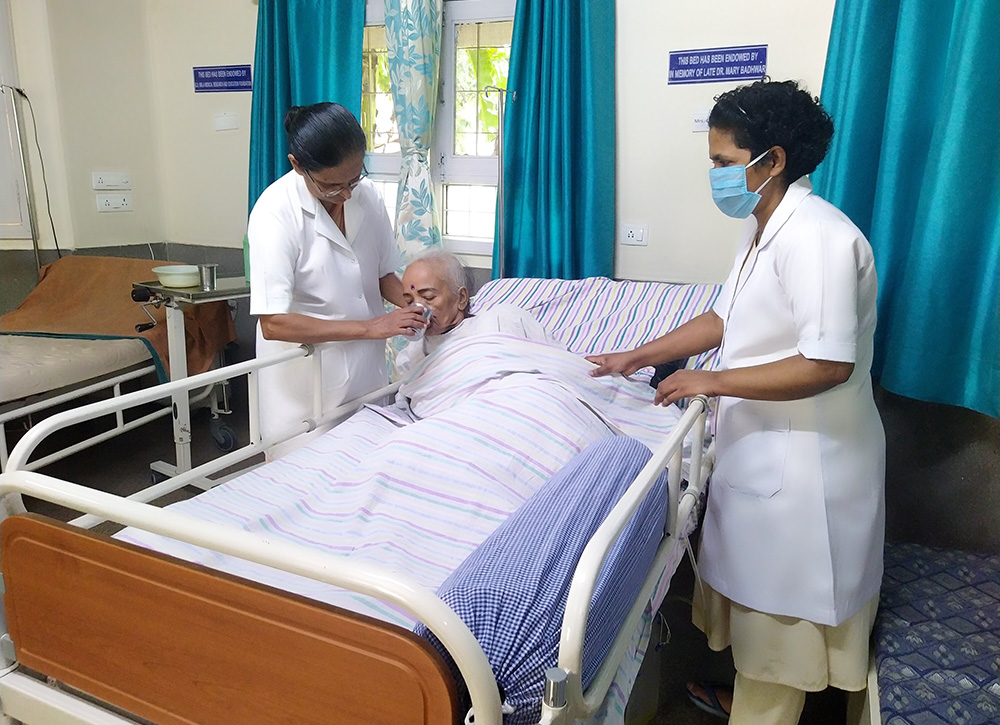 The Delhi center had 11 female and seven male patients as of Nov. 9. They are looked after by seven Holy Cross nuns, along with a team of doctors, nurses, social workers, counselors, volunteers and care workers.

Ten sisters serve the Mumbai center, and five attend the Goa one.

Sr. Daya Mathew, a trained nurse at the Delhi center, said the number of deaths they see each day changes. On some days, two patients die, but there are no deaths on other days, Mathew told GSR as she was handing over a body to the relatives.

Mathew said one needs patience, compassion, wisdom and empathy while dealing with people who are in severe pain and afraid of death.

Mathew was once feeding a patient when another bedridden patient demanded to watch the television. The care worker rolled the bed to the living space and switched on the television.

"We try our best to meet all their needs. It is teamwork," she added.

The Delhi center has served approximately 7,000 patients. De Souza said all three centers together have so far served more than 35,000 patients.

The entrance of the Delhi center has a logo of a strong hand holding a weak one, which signifies support, comfort and consolation at the time of need.

It has dormitories for male and female patients on two separate floors. Both floors have nursing stations, where the scriptures of Hindus, Muslims and Christians are kept. The center's prayer room has symbols of all religions for the use of the patients and their relatives. When a patient dies, the body is kept in the prayer room until it is given to relatives or taken to the crematorium.

The center has no private rooms, as it treats all patients equally.

"We give our service to anyone regardless of their religion, caste or ethnicity," Joseph said.

She also said the hospice does not charge the patients.

"Our only source of income is voluntary donations from individuals and organizations, either from India or overseas," she said. 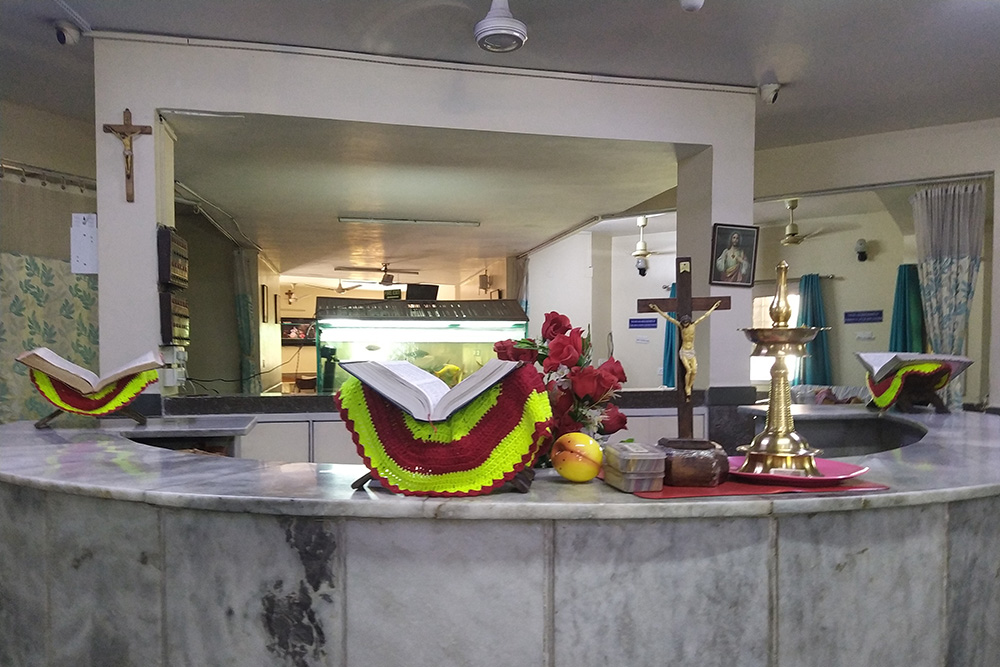 De Souza said he has no plans to open more centers — others have already started hospices across India inspired by Shanti Avedna. Every state in India has at least one hospice now, he said.

After admission, the hospice workers bathe the patients and dress their wounds. Joseph said some patients come with wounds infested with maggots. Many do not take a bath for months before their arrival because of bandages and dressing.

"They feel fresh and relaxed after a good bath. They are given food of their choice," she added.

Joseph said they allow patients to go home if they want: About 10 patients have gone home after feeling better in the past five years.

"Some who were brought unconscious here have gone home walking after a few weeks or months," she said.

"Some died after a few years, some are still alive," she added.

Before arriving at the centers, the patients have exhausted all treatment options. They need a "nutrient diet," "a human touch" and "a peaceful environment" to spend their final days, Joseph said.

"It is important to give patient-oriented care. Some would like to talk, some may not; some would want special food, while a few may refuse to eat," she said.

Sarita, an 84-year-old cancer patient at the New Delhi center who asked not to use her real name, calls the nuns her daughters, who take care of all her needs "more than what I could have got at home."

The Hindu woman came to the center because she did not want to burden her children.

"I am waiting for my death to come," she told GSR.

Sabharwal said the center's ambience and caring staff provide a heavenly feeling to the patients and their attendants.

The 52-year-old woman used to come to the Delhi center during the day when her mother was there. Her sister came at night.

Staff members at Shanti Avedna Sadan, a hospice for terminally ill cancer patients in New Delhi, put on an entertainment program for the patients. (Courtesy of Tabitha Joseph)

"I don't know their names, but I know God has sent his angels to take care of these dying patients," she added.

Not all patients are lucky like Sabharwal's mother. Some are abandoned by their families.

"The relatives bring the patients here and never come back or answer our phone calls," Joseph said.

Some patients are destitute, and "we take care of them as our own family members," she added.

The sisters do not limit their service to the patients; at times, they counsel the relatives, too.

Joseph described a family reunion and reconciliation of a man who had come to the center earlier this year.

The man had come from a nearby hospital, and initially he said he had no family and was destitute. After a few days of talking with him, the man gave the center his friend's phone number. 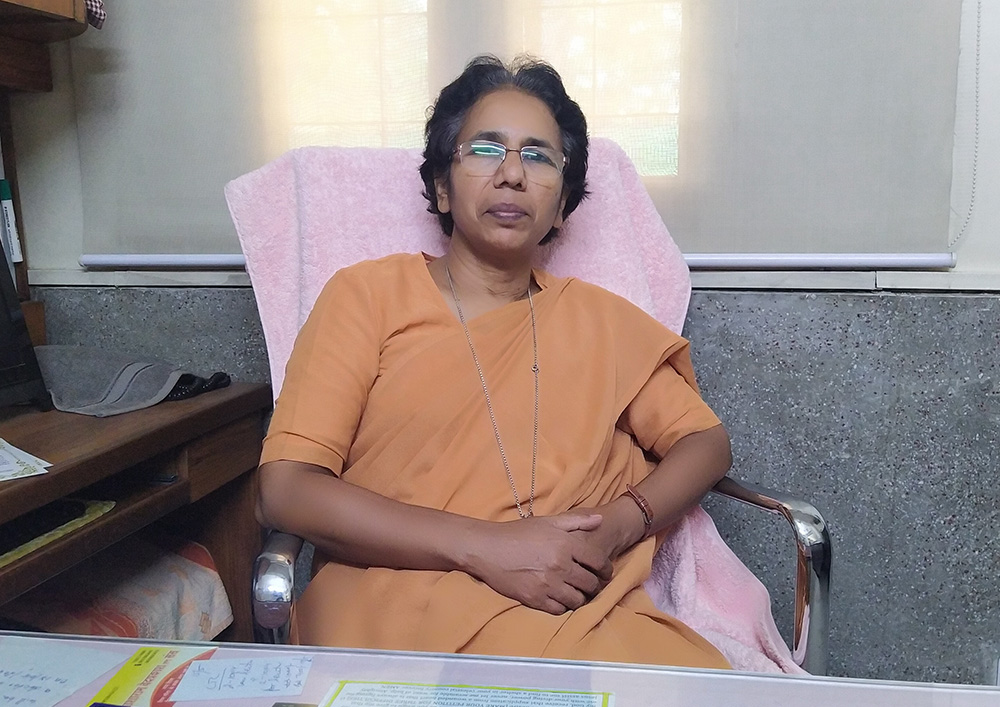 Joseph contacted the friend, who gave her the number of the patient's sister. The sister answered Joseph's call first day but ignored later calls. Joseph again contacted the friend and got the man's mother's address in New Delhi. The nuns went to his mother's house, but she refused to let them in.

"We kept on praying while she was shouting," Joseph said, and a neighbor took note and told the woman to allow the nuns inside the house. She finally let them in, and the nuns talked to her for a long time. The mother gave the contact details of the patient's wife, and the sisters contacted her. Finally, the wife and their 8-year-old son came to the Delhi center along with the patient's mother and sister.

"He was so happy to meet his family, and they all reconciled with each other. After a few days, he died peacefully," Joseph said.

Patients die in different ways. Some go smiling; some talk to their god; others face their end with some difficulties, Joseph said.

"They see God face to face," she said. "We stay with them, holding their hands and praying to make them feel there is someone who cares for them. It is a great strain for us, but we are glad."