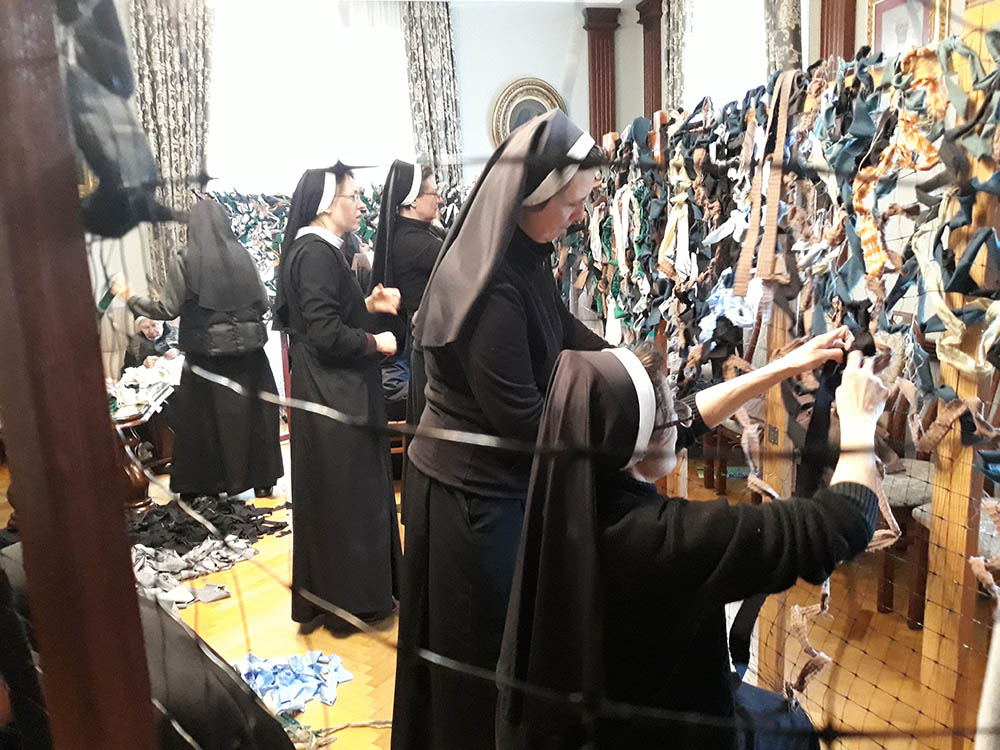 How can I help you? What can I do for you? A Croatian Franciscan priest who studies in Tübingen, Germany, asked me this in an email on Feb. 25. Behind these questions I detected empathy, compassion, readiness to help — but also confusion, discomfort and fear.

This was the question my sisters and I and many Ukrainians have heard so many times in the last few months. Many of you have asked this question. For the first time in many centuries, this question gave a voice to Ukraine and Ukrainians that was not muted by Russia Today (metaphorically speaking).

I remember my fruitless efforts eight years ago, when I studied at the University of Zagreb, to explain the Ukrainian side when Russia annexed Crimea. I felt that I was behind a glass wall — they could see me but did not hear anything I said. I wanted to scream for help but the sound of my voice dissolved in Russian propaganda (split country, failed state, Nazi nation, part of Russia).

Now, that compassionate question gave Ukrainians a chance to be heard. And I am grateful that now the voice of Ukraine is heard in the world and we are contributing to the 2,000-year-old dialogue of European culture.

I am a member of the Basilian Sisters, an international order of pontifical right of the Eastern Catholic Churches. About 40% of our membership is in Ukraine; 90% of our membership traces its roots to two Ukrainian monasteries in Slovita and Yavoriv, with more than 400 years of history. 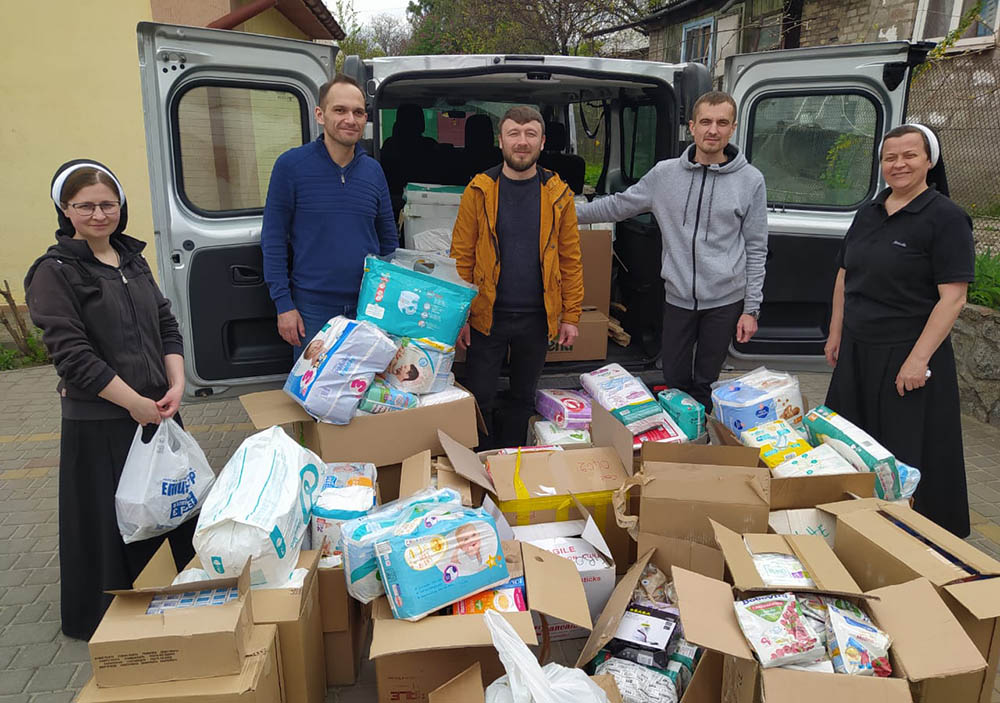 Yavoriv, a small city 20 kilometers from the border with Poland, was bombed on March 13. About 60 wounded people were brought to the hospital there; many visited our monastery across the road to receive spiritual and psychological support.

What was our reaction to the war? First, we decided to stay. Of 160 Basilian Sisters in the Ukrainian Province, only five left the country. Others decided to be with those who need their help and support. Sisters stayed in Kyiv, Zaporizhya, Poltava, Lviv, Ivano-Frankivsk, Ternopil, Uzhgorod and 11 other small locations all around Ukraine. We are called to be a praying, healing and life-giving presence of God, and the war put a new light on our vocation and that presence for others.

Sisters all over the world, especially in Ukraine, continue to pray and find a meaning in the drastic events that sometimes made it seem that we are in the center of hell. It takes strong faith and contemplative eyes to see that the doors to heaven are hidden in that "center of hell," to see the signs of God's presence in the love, courage, selflessness of ordinary people. Military (especially in Mariupol), volunteers, ordinary citizens, men and women have done and still are doing impossible things. 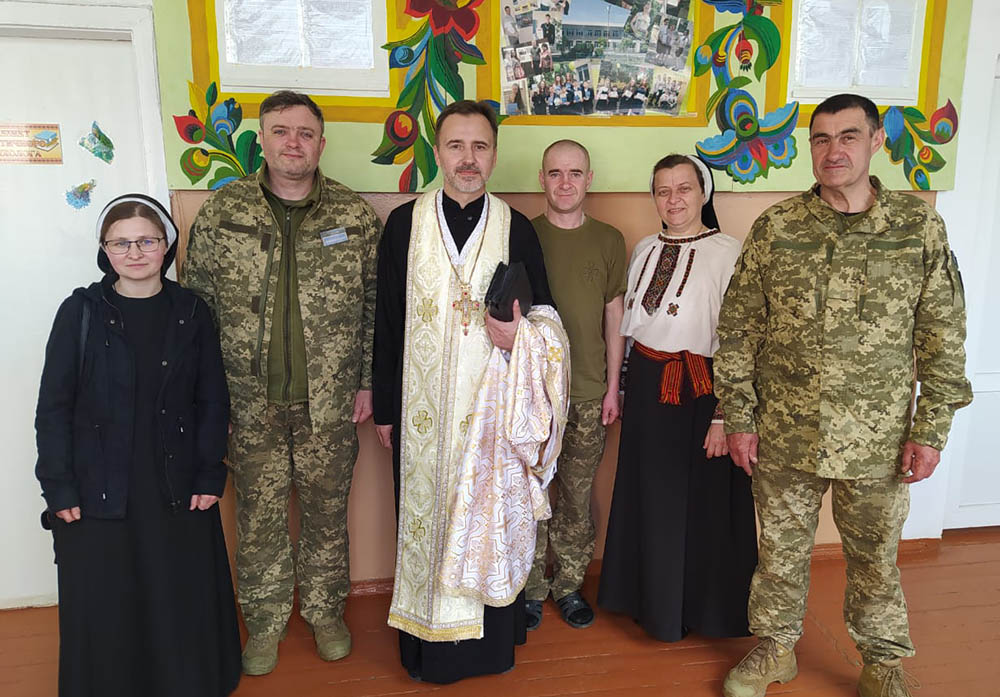 Sisters participate in the spiritual support of Ukrainian soldiers. (Courtesy of the Basilian Sisters)

Knowing the creative power of word, our sisters understand how important it is to be the voice of truth. The Book of Genesis describes how God's word created all things, and every creation was good. When the word is abused or misused it leads to destruction. If any person, community or country lives inside fake stories, relationships or worldviews (haven't we all experienced it in one way or another?), sooner or later it collapses from inside. Basilian Sisters strive to name things and events by their true names.

On the sixth day of war, March 1, our general superior, Mother Marcela Runcan, addressed Basilian Sisters in Ukraine and the nation with a letter defining events as "shocking and unjustified aggression of Russian Federation military forces against Ukraine and Ukrainians," while many just called it a Ukrainian crisis. Words are important, and now with a clear conscience I call what has been happening in Ukraine since Feb. 24 a genocide. 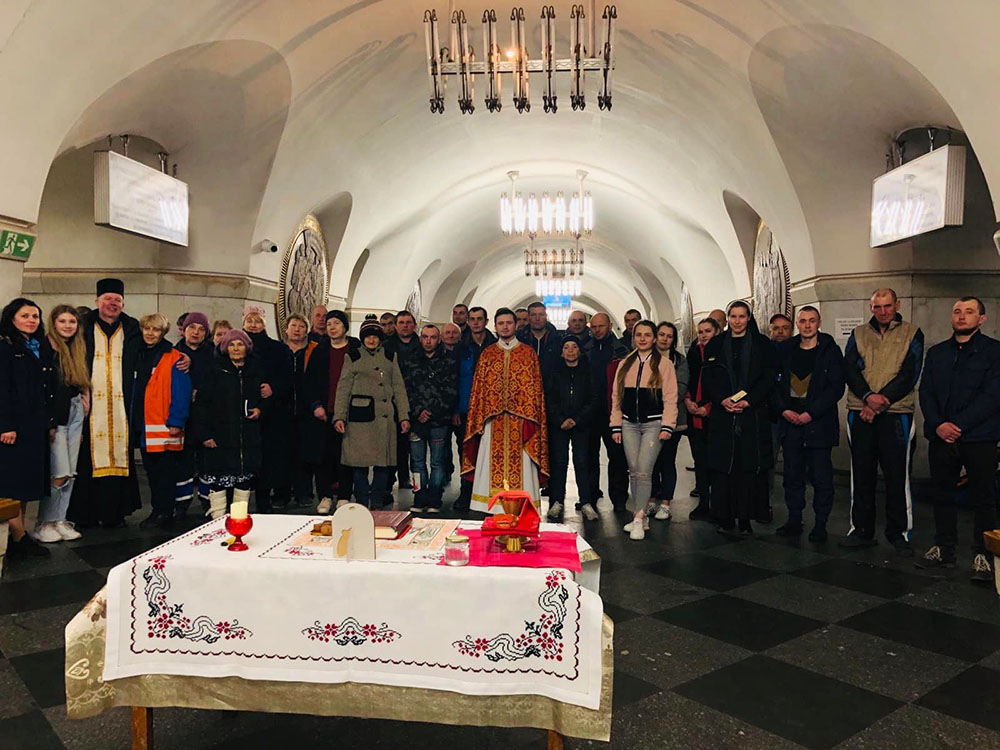 Participants in a liturgy at an underground station in Kyiv, Ukraine (Courtesy of the Basilian Sisters)

Our sisters wrote to journals, newspapers, websites and Facebook pages, and gave radio interviews. Basilian Sisters wrote columns for Global Sisters Report, and met with Wopke Hoekstra, minister of foreign affairs for the Netherlands in Rome.

The Croatian Franciscan father also asked me what Ukraine or the West did to trigger Putin's attack. The Russian Federation government — supported by the majority of its citizens — sent 150,000 soldiers to kill, rape, kidnap and destroy Ukrainian citizens because the Russian government has decided that there is no space in the world for our nation, culture, history or our democratic future.

In May, I visited the Basilica of St. Clement in Rome; the written explanation of one of the frescoes stated that the head of St. Clement was found in "Crimea, Russia." Well! Russian propaganda is not only on Russian television channels, but in Russian literature, schoolbooks, museums, all over the world. It is important to revise them all, so that children will not have to face a new totalitarian regime in the future.

From the beginning, Basilian Sisters in Ukraine opened their hearts and the doors of nine monasteries to refugees. Some of the families stayed with the sisters a few days, then left for the West. Now about 60 people are staying with us; we have shared all we have with those in great need.

Sisters prepare food for the refugees and military. They transport — sometimes evacuating from dangerous areas — families to western Ukraine or the western border. Sisters spread humanitarian aid to those who are in need. They are weaving camouflage nets, offering psychological help to the refugees (children and adults), visiting orphanages, working and volunteering in hospitals.

Our sisters in Poland and Croatia also took in Ukrainian refugees, volunteering as interpreters, social workers and offering other support. Our members in Slovakia offer humanitarian aid for refugees in Bratislava. Romanian sisters gather humanitarian aid and frequently transport it to Ukraine.

Seeing the pain and wounds of those affected by the war, we keep asking ourselves what else can we do in the future. In the 20th century, our predecessors worked with children who lost their parents. Today, we have to offer Ukrainian children love, safety, good education and hope for the future. Being an international order and having communities in North and South America, Europe and Australia, we are striving to organize our efforts, so at our meeting of major superiors in Slovakia this August we can come to some decisions about how we can contribute to the future of the children affected by war. 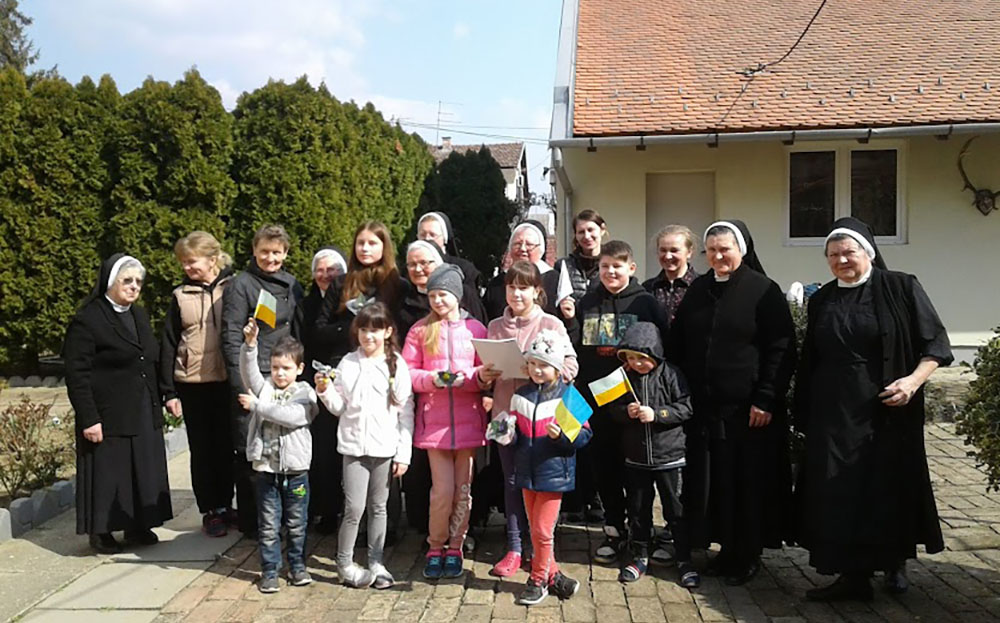 What can I do for you? Many people of goodwill and kind heart have asked this over the last few months. That day on Feb. 25, I told my acquaintance: We need prayer, we need arms and protected sky, we need sanctions against the aggressor and humanitarian aid, and we drastically need the truth to be heard. The fact that I am writing this says that my voice and the voices of millions have been heard, and I am grateful for that.

When the war in Ukraine began in 2014, in many places where our troops were stationed, the steppe (vast Ukrainian grassland) would spring with green onions and other plants around the trenches. One does not have to be Solomon to see who loves this steppe and to whom this land belongs.

Staying firm in faith, and experiencing so much support, I have no doubt that Ukrainian children will have a future in the family of European nations — where I believe they belong. The secret of victory is in joining our efforts and contributing to the values of love, truth, freedom and life by doing what we know the best.

Finally, I strongly believe that Ukraine will give to the family of nations her gift of golden share, the courage and dignity that will make the world better.