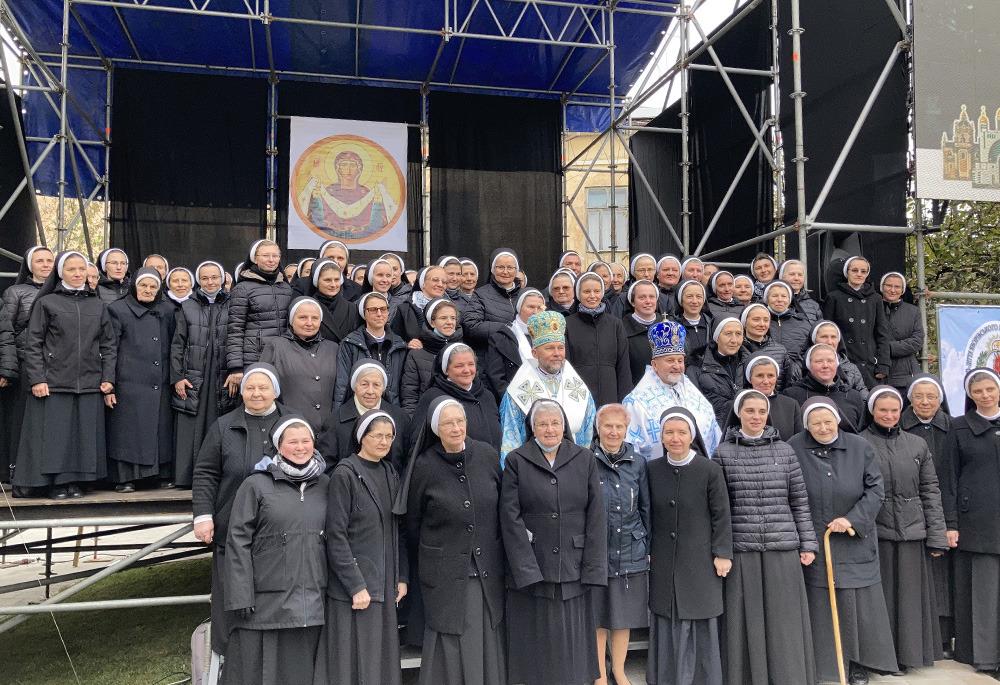 Editor's note: The current situation in Ukraine has stimulated interest by Catholic sisters writing about their communities and experiences in that country. Today we present the first of three columns that were submitted recently.

In October 2021 we celebrated the 400th anniversary of the founding of Holy Trinity Province in Lviv, Ukraine. We gathered in Yavoriv, the site of the first monastery in the Order of the Sisters of St. Basil the Great.

Reflecting over the founding, we acknowledged that history is not just about the past; it is about what occurs each day: sometimes about human pain and human displacement; about waves of change; about people leaving homes to which they can never return; about generations of people separated from their past. At the same time history is about progress and hope — about people who never give up. And when these two aspects of history intersect, the ramifications are endless.

All our provinces, vice provinces, delegatures, missions, and monasteries of the Sisters of the Order of St. Basil the Great can trace their roots from 1037 when Jaroslav the Wise founded the Monastery of St. Irene in Kiev, Ukraine.

As other monasteries were founded through the centuries, sisters first lived the strict monastic observance, but by the 17th century they transitioned to more apostolic work, especially the care of orphans and teaching. Later they continued to keep up with the changing times, dedicating their prayers, talents and energy to new endeavors — supporting the sick and infirm and those suffering affliction of any sort.

The seedling planted 400 years ago was transplanted, propagated and took root in new ground in the United States with new endeavors, parenting Jesus, Lover of Humanity Province in Philadelphia — which in turn parented Our Lady of Perpetual Help Province in Uniontown and Sacred Heart Monastery in Middletown, New York.

The Holy Trinity Province history is truly a story of daring deeds, portraying love of God and love of neighbor. A story grounded in faith, it is about strong and faithful women who laid the foundation — with strong and faithful church leaders who believed in them.

The sisters endured many hardships, especially during the communist era of the 19th and 20th centuries. Despite precarious political and economic situations, the sisters remained committed to liturgical prayer, the Divine Liturgy, personal prayer, community life and ministry. They survived and now they thrive!

Like an olive tree, they withstood the elements, growing steadily through many challenges. The year 1989 is etched in the minds of the world as we witnessed the fall of communism, symbolized by the fall of the Berlin Wall. By 1990, with communist leaders out of power, free elections were beginning in all the Eastern European countries — Ukraine included. By 1995 they were finally able to gather with the other provinces of their international order at the general chapter in Rome. What a tearful and memorable occasion it was as other delegates listened to their incredible journey — their account of the details of their experience through such challenging times. What a glorious moment as we all met them and heard their story!

Millions of people have been touched throughout these years through their education ministry and their faithful outreach to laity. The order has benefited from the youth, enthusiasm and courage of these sisters.

But the forward movement was not without tears. They were confronted with internal division as some sisters separated from the recently united province. This was a challenging and sad situation for them and the entire order. They were also preoccupied with getting property back from the government, recovering monasteries confiscated under communist rule.

They follow their vocation to love expressed by the words of St. Basil:

"The bread which you do not use is the bread of the hungry;
The garment hanging in your wardrobe is the garment of him who is naked;
The shoes that you do not wear are the shoes
Of the one who is barefoot;
The money that you keep locked away is the money of the poor;
The acts of charity that you do not perform are so
Many injustices that you commit."

There is a strong bond and a common legacy between the Ukrainian and American Provinces. In 1911 Mother Helena Langevich from Yavoriv made a long and arduous trans-Atlantic voyage with two sisters and two novices to found the American Province. We are their offspring — their children. With wisdom and courage they changed the history of the order by starting a new foundation on a new continent. 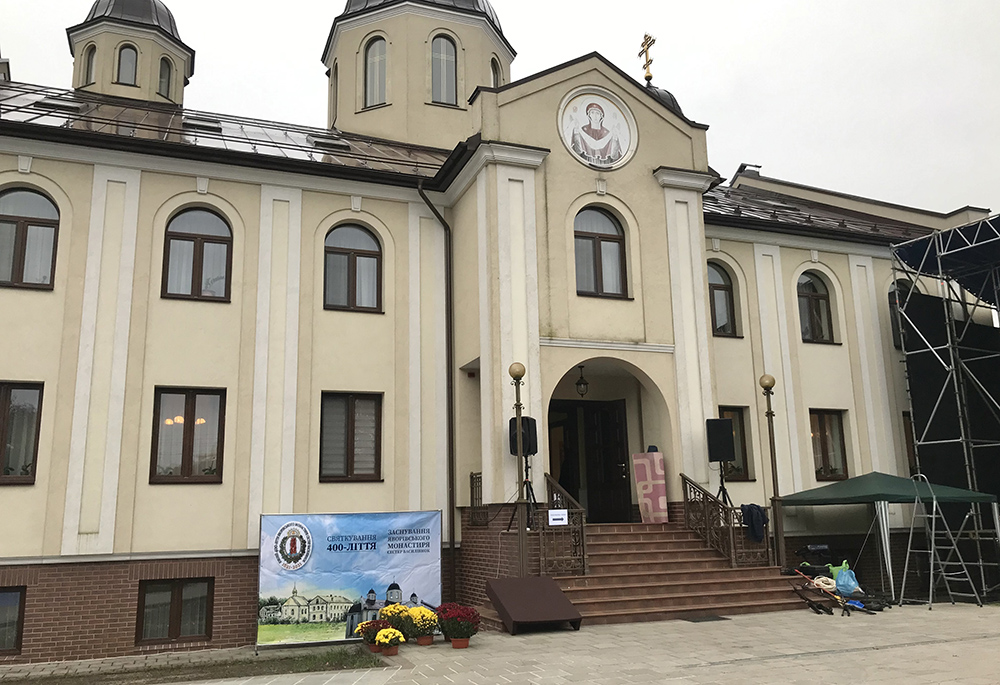 Immediately after the fall of communism the connection between our two provinces has increased, as we helped them rebuild the Ukrainian Province in various ways, and continue to collaborate — even sharing human resources.

We had a collaborative music tour: 22 Ukrainian sisters joined us in presenting concerts in Pittsburgh, Parma and Chicago of original music written and composed by Sr. Laura Palka, of our province. We covered the expenses and all proceeds went to the Ukrainian Province. It was a joy for our aging community to hear the joyful voices and youthful footsteps as they ran — not walked — up and down the motherhouse steps!

Our sisters provide financial support and volunteer to help conduct summer camps for children, and minister in eight orphanages, psychiatric institutions and halfway houses. Sisters and volunteers have collaborated with priests and religious in Ukraine to provide Berlitz-style English camps.

Throughout their long and illustrious history, our order has been blessed with strong and competent leaders able to galvanize the members and promote the work and aspirations of the order — prayerful, faith-filled leaders who believed in a woman's power to influence the course of history, render wise decisions, and courageously meet the challenges of the times.

Their story is an incredible journey from the Pokrov monastery in Yavoriv to the continued unfolding of the Basilian monasteries in America, Poland, Slovakia, Hungary and Argentina.

And now, once again, our sisters in Ukraine are confronted with an incursion into their borders by their aggressive neighbor — Russia! But these women of valor still have strong resolve and relentlessness as once again they face this threat. Provincial Superior Sr. Joann Sosler OSBM recently sent out this request for prayer:

"Forty-three percent of our sisters have lived through war, escaped and now live with the effects of that experience. The Sisters of St. Basil the Great, Holy Trinity Province tell of when their monastery was confiscated and they were either imprisoned or sent to live alone. Today, we pray for all the Sisters of St. Basil the Great and all monastics in Ukraine. They live in a precarious situation."

We admire the spirit and the courage which they so willingly exhibited while under the harsh regime of communism in the past. Once again, as they are threatened in Zaporizhia and other areas, their determination will overcome this new challenge. Throughout history they have moved forward no matter what the obstacles. Once again, they will do so because they are attuned to how God's spirit was leading them through difficulties and challenges.

Living in the "land of the free and brave" we have no understanding of what it means to live under an oppressive regime. One thing we are sure of — without a doubt their sacrifices have brought many blessings to the order.

Related: Amid change and uncertainty, Basilian Sisters in Ukraine embrace risk and love