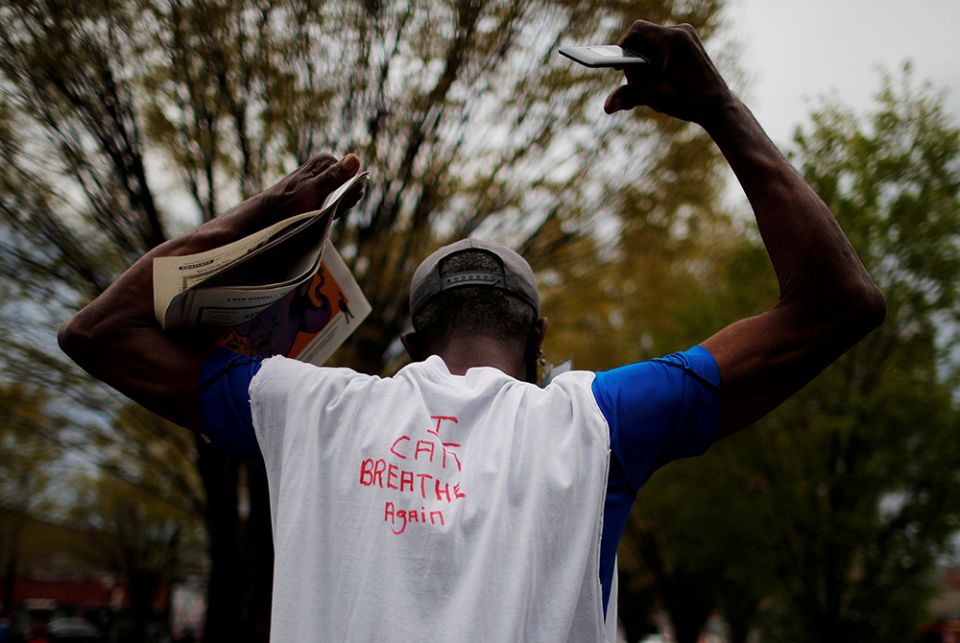 A man in Boston wears a hand-lettered T-shirt reading "I Can Breathe Again" at a demonstration April 21, 2021, one day after jurors convicted former Minneapolis police officer Derek Chauvin of second-degree unintentional murder, third-degree murder and second-degree manslaughter in the May 2020 death of George Floyd. (CNS/Brian Snyder, Reuters)

When the jury's verdict was announced, finding former officer Derek Chauvin guilty on all three counts, you could almost feel the collective exhale of many in Minneapolis and across the country.

Personally, I was reminded of Psalm 104 (29-30): "Take away their breath, they perish and return to the dust. Send forth your spirit, they are created and you renew the face of the earth."

I will admit that I was not terribly confident that the trial would result in a guilty verdict. While the evidence was indeed overwhelming, I could not help but remember watching the news of the acquittal of the four officers who were also caught on tape decades ago, brutally beating Rodney King. They were not held accountable. Justice was not served then. Is it any wonder that thousands took their frustration and anger to the streets?

Take away their breath, they perish and return to dust.

There does seem to be change in the air since the murder of George Floyd, witnessed by children on the street corner and the entire world on the screen. I sometimes wonder what the outcome would have been if not for the pandemic, keeping us at home and glued to our screens. When those screens showed the breath of life being squeezed out of Mr. Floyd by a white officer's knee on his neck, for over nine minutes, we were unable to look away. As a result, white society, and social and judicial structures, seem less inclined to tolerate or ignore long standing patterns of abuse of authority and racially based violence by those who are sworn to protect. At the very least, this one officer has been held accountable for his actions.

The word accountability showed up frequently on my Twitter feed this week, as did justice.

Justice is a continuum.

It is, as my father said, “love correcting everything that stands against love.”

To get to justice, we need a revolution of values.

"Accountability does not = justice," wrote Bernice King, daughter of Martin Luther King, Jr. "Justice is a continuum. It is, as my father said, 'love correcting everything that stands against love.' To get to justice, we need a revolution of values."

"The conviction of one individual is a small measure of justice when we have a system that remains plagued with centuries-worth of racism in the law and in practice," tweeted Sr. Helen Prejean. "I pray that this will be a catalyst for real change."

A jury found Derek Chauvin guilty of murdering George Floyd. The conviction of one individual is a small measure of justice when we have a system that remains plagued with centuries-worth of racism in the law and in practice. I pray that this will be a catalyst for real change.

"This moment matters but it's way, way too soon to declare that it's the beginning of justice for Black folks," tweeted author Austin Channing Brown.

Im gonna log off for just a little bit after this, but I want to warn people against “Obamaing” this moment. So many were quick to declare us post racial and *gestures*. This moment matters but it’s way, way too soon to declare that it’s the beginning of justice for Black folks.

We have a long way to go. We are called to be co-creators with the spirit to renew the face of the earth. This is true in a particular way for those of us who have been privileged enough by white body supremacy to ignore the dangerous reality that faces our Black and brown brothers and sisters in their daily lives. We have been privileged enough not to question a system that burdens, and sometimes even kills, our neighbors because of the color of their skin.

Recently, I was unable to place my new license plates on the front of my car because I didn't have the right type of screws. For a few days, I drove around town with only my rear license plate. I had a slight concern in the back of my mind that I might be pulled over, but never did I ever imagine, let alone fear, whether I might leave such an encounter alive. That, my friends, is white privilege. Something is systemically wrong, beyond a few "bad apples," when entire segments of the population must fear encounters with police sworn to serve and protect.

In her essay in the book Interrupting White Privilege: Catholic Theologians Break the Silence, Mary Elizabeth Hobgood notes that beneficiaries of white privilege are "accountable for understanding how racism advantages them at the expense of others." She names this as "a lifelong task of gaining religious awareness and engaging in moral action. … We will never adequately deal with the reality of racial justice, and its generational effects, unless we name its causes and attack its sources."

So yes, exhale that breath you've been holding for far too long.

But we can't stop there. We must live into the words of the psalmist. God sends forth the Spirit. We are called to co-create, to transform ourselves and society to renew the face of the earth and respect human dignity and honor every life.

We owe nothing less to the many men, women and children who have suffered and died by violence in our racialized society. We must do and be better. For George Floyd. Michael Brown. Eric Garner. Sandra Bland. Daunte Wright. Adam Toledo. Ma'Khia Bryant. The list of Black and brown victims of police violence is too long. We must stop this senseless death and violence.

Inhale. Exhale. Then engage in the transformative work. Together. 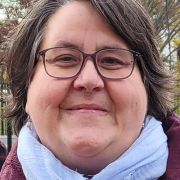 Susan Rose Francois is a member of the Congregation Leadership Team for the Sisters of St. Joseph of Peace.

The world is racist

Serving those in the shadows, sisters follow in footsteps of women long gone