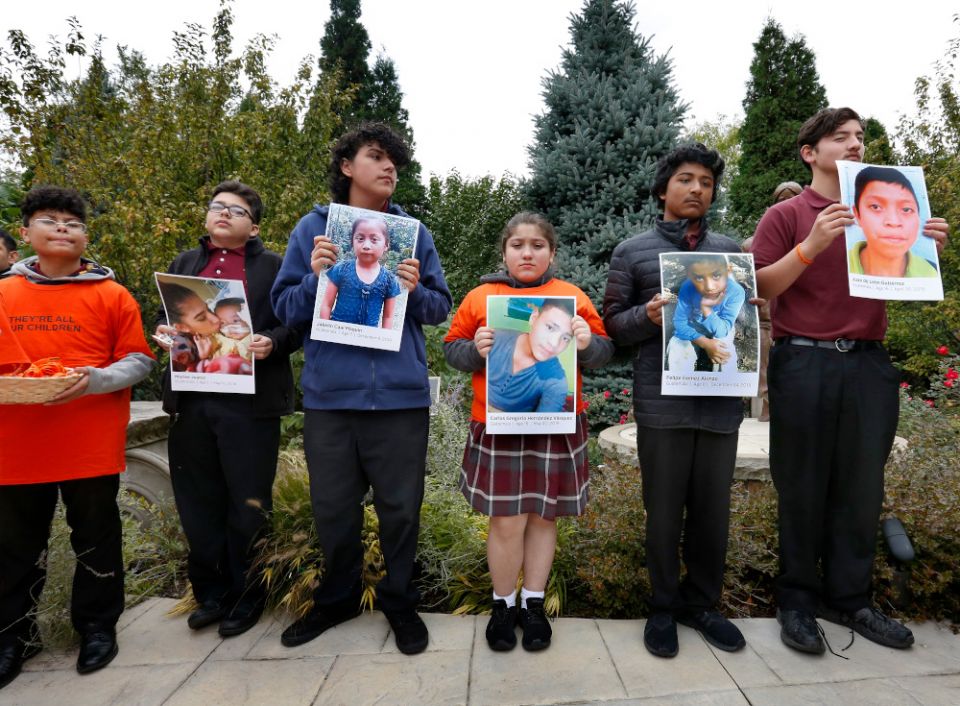 Students from Our Lady of Guadalupe School in Chicago are seen Oct. 16, 2019, holding pictures of detained immigrant children who have died. The children were remembered during a prayer service at Holy Family Church. (CNS/Chicago Catholic/Karen Callaway)

Chicago — Dozens of Chicago-area Catholics were joined by Lutheran, Jewish and Muslim representatives as they all prayed for immigrant children held in U.S. detention centers Oct. 16.

At the Healing Garden near Holy Family Church, the group sang and prayed at the "They're All Our Children" service before participants each pledged to spend one of the next 40 days in prayer and fasting for detained immigrant children and their families.

Mercy Sister JoAnn Persch, one of the founders of the Interfaith Community for Detained Immigrants, teared up as she read the names, ages, countries of origin and dates of death of seven children who have died either in the custody of U.S. detention or after becoming ill while in custody since 2018.

As she spoke, seventh- and eighth-graders from Our Lady of Guadalupe School held photographs of the seven who died.

Five were children: Darlyn Cristabel Cordova-Valle, 10, from El Salvador, died Sept. 29, 2018, in the custody of the Department of Health and Human Services Office of Refugee Resettlement in Omaha, Nebraska; Jakelin Caal Maquin, 7, from Guatemala, died Dec. 8, 2018; Felipe Gomez Alonzo, 8, from Guatemala, died Dec. 24, 2018; Mariee Juarez, 1, from Guatemala, died May 10 in New Jersey after becoming ill in the Dilley, Texas, detention facility; and Wilmer Josue Ramirez Vasquez, 2 and a half, died May 14 in an El Paso, Texas, hospital after being taken into Customs and Border Protection custody the month before.

While Darlyn, who suffered from a heart condition, was the first of the children to die, her death was not publicly announced until May.

"For these children, and their families who mourn their loss, we pray," Persch said. 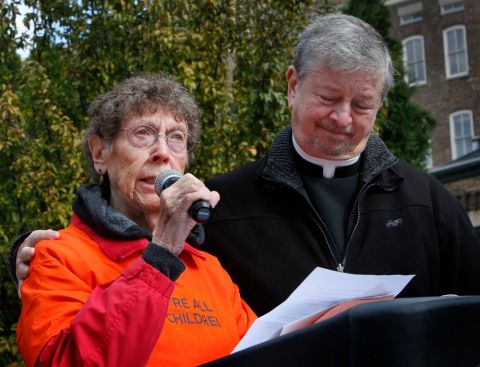 She then called on all people of faith to act to change the way migrants, especially migrant children, are treated.

"This moment in time required bold action," Persch said. "Since we are all God's children, the pain of one is the pain of all. People of faith must use their voices to change this immoral and inhumane system. We have to act, and that's going to look different for each of us. It means we each have to get out of our comfort zones. Sisters and brothers of faith, step out. Speak out. Have the moral courage to bring about change."

"We cannot let hate define us," Murphy said. She referred to the signs reading "El Paso strong" that sprouted after 22 people were killed in mass shooting at a Walmart in that city in August. "Can we be 'faith strong'? Can we have the courage to do what we have to do?"

The mission is clear, speakers said.

"There are 92 verses in the Bible that talk about welcoming the stranger," said Mary Campbell, program director for the Evangelical Lutheran Church in America's effort to accompany and advocate for migrant minors. "I believe God has been definitive about what we are called to do, especially when it comes to caring for our children."

Rabbi Reni Dickman, executive vice president of the Chicago Board of Rabbis and senior educator for the Jewish United Fund, called on the United States to respect the human dignity of migrants.

"Every child, every person, is created in the image and likeness of God," Dickman said, adding that some leaders are "perverting the ways of justice and peace so that a few may reap political rewards."

The issue is moral rather than political, said Gregory Abdullah Mitchell, executive director of the Council of Islamic Organizations of Greater Chicago.

"We see policy that separates mom from daughter, father from son, parent from child," Mitchell said.

It's happening not only on the U.S. southern border, but also in Syria, Iraq, among the Rohingya people in Myanmar and in Afghanistan, he said. "We need to change these policies. It's not about whether you are red or blue, it's about right and wrong."

The "They're All Our Children" service was sponsored by the immigration ministry of the Archdiocese of Chicago's Office of Human Dignity and Solidarity, Priests for Justice for Immigrants, Sisters and Brothers of Immigrants, the Interfaith Community for Detained Immigrants, the Viatorians, the Claretian Missionaries, the Capuchin Franciscan Province of St. Joseph and the Sisters of Mercy.

How sisters are connected to civil rights history in Selma