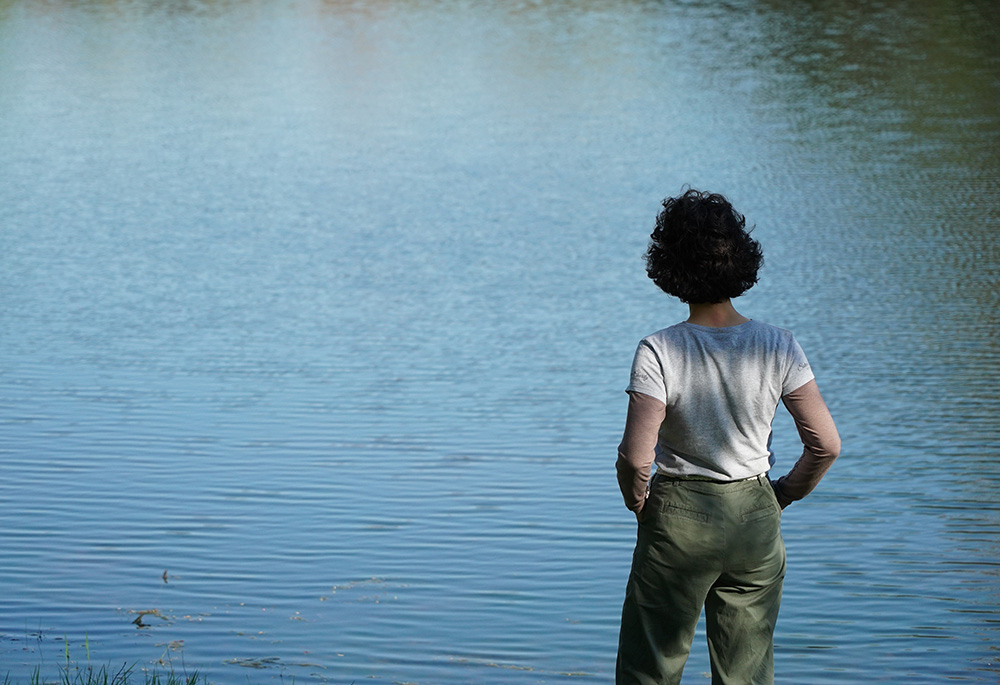 One of my favorite spots for spiritual reflection and grounding at Nazareth is on the banks of our ponds, as pictured here. (Courtesy of the Sisters of Charity of Nazareth)

I breathe deeply in, and I exhale slowly. I arrive here. In this writing, I have nothing to fear.

Truth be told, I've dreaded writing and sharing this piece because it feels taboo. Talking about struggling through faith as I've lived and served among women religious? As I write for a publication that shares the stories of Catholic sisters? One would think my spirituality is as grounded as my reflections. Alas, not everything is as it seems.

To say I've been in a spiritual rut would be an understatement. Since my early years of college, about five years ago, I have felt as if I've been delicately walking a tightrope between feeling too disheartened in my religious upbringing to uphold it, too headstrong to pretend to believe what I don't, and too overwhelmed to move forward. It's almost like an internal spiritual warfare.

Now, I'm fully aware of the irony of living with Catholic women religious and writing for this Catholic publication while struggling with my faith, particularly with pent-up frustrations toward organized religion and the Catholic Church as I've experienced it.

This tension between "action" and "faith" has been ebbing and flowing in my life for years, but being reimmersed in a religious setting here has released it to a crest. Instead of the anger, trauma and confusion I've been feeling about religion, however, I've found healing with the sisters. But I'm getting ahead of myself. 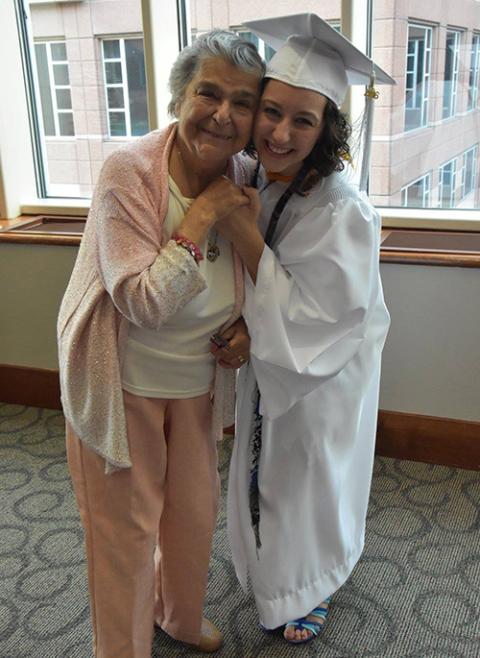 My maternal grandmother, Marie, and I smile and celebrate my high school graduation from a Catholic all-girls high school in Kentucky. Much of my spirituality, then and now, is informed by the faith and hope instilled by my grandmother, a matriarch of sorts in our family. (Courtesy of Michelle Wilcher Back)

You see, I was born in a Catholic town, raised in a Catholic family, and educated in Catholic schools. As a dear friend of mine so intuitively said: At the same time we learned to spell elementary words, we learned hell was real and we would probably go there.

Now, I am immensely grateful for my town, my family and my Catholic education. I have had some great and loving experiences in the Catholic Church and in Catholic schools. When it came time for me to practice my faith in my own way, however, I felt shame and guilt for the questions that arose.

My faith, as I had learned it, felt disconnected from the love I felt for my LGBTQ+ friends and family, for example. Further, I couldn't understand why any all-loving God would leave behind those who didn't fit in a certain box or follow a specific religious tradition. Most of all, I started finding that the only church I wanted to attend was outside of the traditional four walls. Instead, I found God through service in the streets, through advocacy efforts to protect those who are poor and marginalized, and through learning how to love and care for myself.

As the questions grew louder and I felt more disconnected from a church that regards members who pick and choose their beliefs to be "cafeteria Catholics" (shame implied), I stopped asking them.

The truth is, the Catholicism I grew up to know didn't give me the tools or empowerment to ask these questions and seek answers that fed my spiritual knowing. That was my experience, and that's OK. Since then, I have found some beautiful religious communities and encountered endless believers of all types. In this year of service, particularly, noteworthy feelings of curiosity and discovery have empowered me to start asking those questions again.

Living and serving with the Sisters of Charity of Nazareth in Kentucky has reminded me that we all experience our spirituality differently. In fact, this is what makes faith so beautiful: It is dependent upon and informed by our worldviews and experiences. 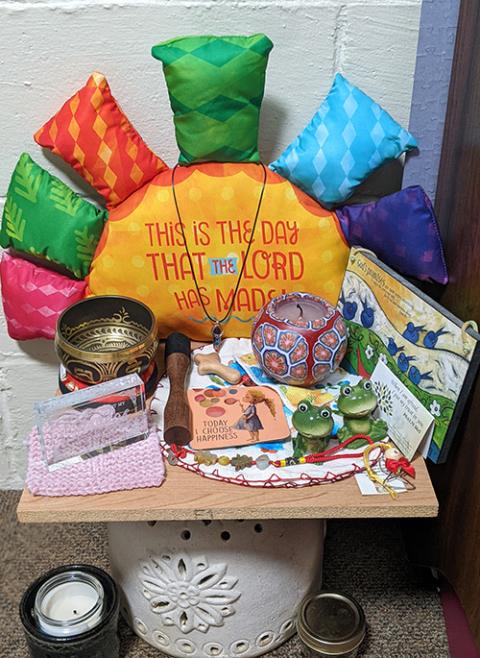 Today, I keep an altar in my room adorned with various symbols and reminders of faith. Sometimes, I light the candle on this altar and journal or do yoga nearby to breathe life into my current spiritual practices. (Julia Gerwe)

By opening my heart and mind to different churches, I was able to experience the beauty in other faith traditions. By settling into my yoga and meditation practices, I was able to connect, really connect, with my spirit and intentionally worship the Earth, the Spirit, the Divine.

However, it wasn't until I recently spoke with a Sister of Charity of Nazareth that I realized I had been limiting myself, held back by old tapes running in my mind that replayed a shameful narrative of one who strayed away from a once-unquestioned Catholic tradition.

This sister laughed with me and reassured me that she, too, was still exploring and struggling through her faith. She encouraged me to think of out-of-the-box ideas to ignite my spiritual curiosity, saying, "There's no right way; there's only Julia's way."

Together, we brainstormed ideas and strategies to reimagine the Divine as I experienced it. I swapped seemingly obligatory tasks I had labeled as "spiritual exploration" and faced with a feeling of overwhelm for more unusual spiritual practices, like painting how I see God/the Divine, finding an element in nature to ground my spirituality, and writing my own spiritual manifesto to flesh out what I believe.

We brought interactions with God down to my level. Finally, I was empowered to imagine what building a relationship with the Spirit could look like and how I could be authentically me in the process.

This idea-sharing seemed small, but it was just the push I needed to get out of my head and into my body and this world to experience my spirituality. In releasing my shame and guilt, I felt free to ask the questions that make us human — and closer to a Guiding Spirit because of it.

This personal realization led me to ponder the relationship other young people have with spirituality and religion. I often hear about the decline of young people participating in organized religion and committing to Catholic religious life. I was curious to hear stories outside of my own.

I turned to a bit of investigative journalism via crowdsourcing to hear from my peers by releasing a public survey on Facebook. In it, I asked about how often individuals think about spirituality, when they feel most connected with a higher power or their spiritual side, and what their journeys in or outside of organized religion have looked like.

After I received nearly 20 responses from various friends, acquaintances, and some strangers with a median age of 23 years old, I certainly had a less-than-comprehensive guide to my peers' perspectives on faith yet some interesting points of view to consider. 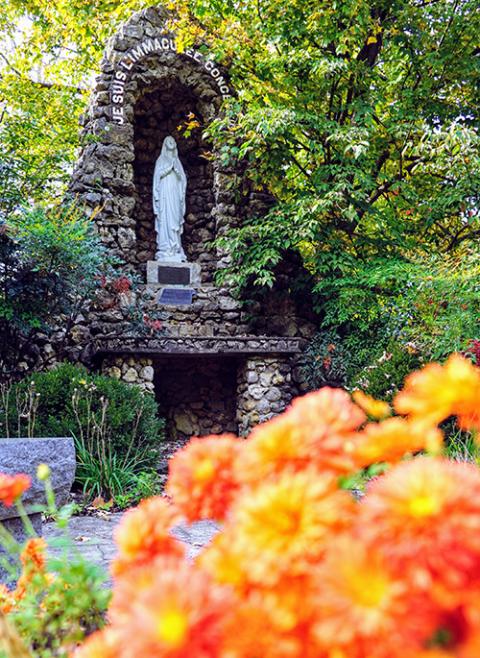 This grotto resembling St. Bernadette's vision of Mary is just one beautiful, spiritual center at Nazareth. On this holy ground, I have been called to consider my own spirituality more deeply. (Courtesy of the Sisters of Charity of Nazareth)

Hearing from these peers who identified mostly as Christian, agnostic or atheist offered a window into the lives of other young people who think about faith sometimes, who question their spirituality regularly, and who feel most connected with their spirituality through nature and doing things they enjoy as much as (or more than) during church or worship services.

Some peer participants expressed frustrations and confusion similar to mine about church traditions and practices. One friend voiced that his spirituality is "trying to focus on what's happening here, now, in front of me instead of worrying about whether it will affect my relationship with a divine being down the line." Another friend is embracing traditions of mysticism and magic in her family and has learned that being away from a "Catholic bubble" has allowed her to realize that maybe religion and magic aren't mutually exclusive. A final participant vulnerably shared, "I don't know what I believe in. I am having a hard time with God right now."

What was so beautiful is that none of these perspectives was isolated. Themes ran like common threads throughout survey responses and even resonated with my own spiritual experience. I am thankful for those who spoke with me so candidly.

In this experiment, I learned that having these open and honest conversations is important to my own ever-growing spiritual identity. Perhaps the spiritual community I crave so deeply could be made up of those who didn't necessarily believe the same things as I did. In having these conversations, we could support and learn from each other.

Today, I'm finally not afraid to talk about religion and spirituality. My years of service alongside the sisters have allowed me to find a spiritual way forward.

I'm still sorting out what I believe and how I want to worship, but I finally feel free to ask the right questions. In doing so, I'm able to remain open and flexible to a Spirit of love living on Earth here and now.