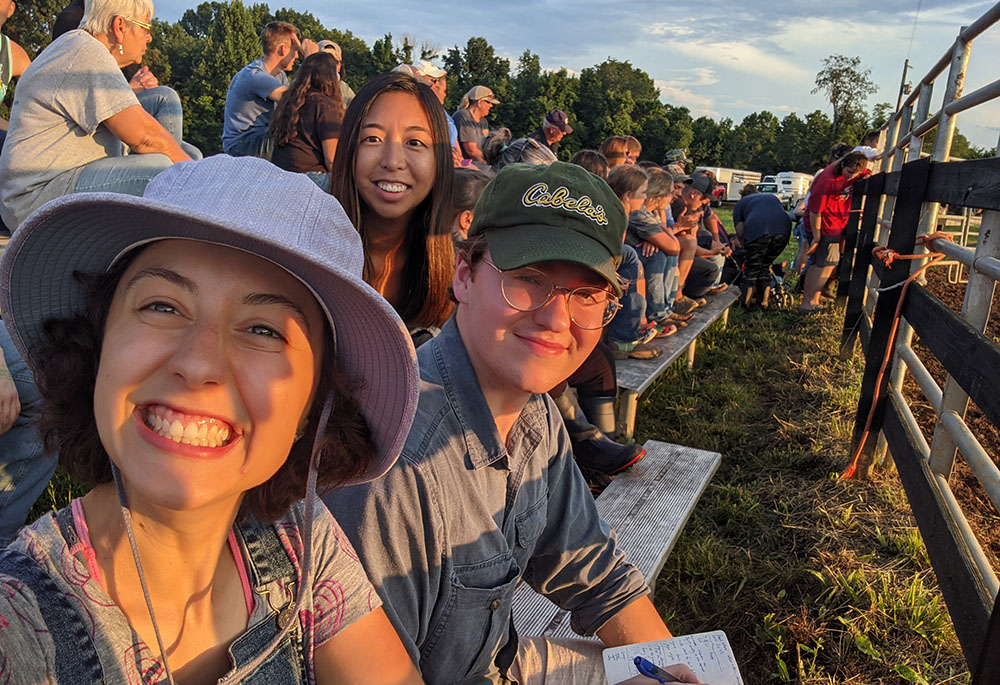 Last summer, I visited the Nelson County Fair's rodeo, a much-anticipated event in the community, with two other AmeriCorps volunteers, Jane Rudnick (above, center) and River Fuchs (right). Going to the rodeo was a new experience and loads of fun, and I especially liked cheering on various age groups of children learning to ride various animals, including sheep and horses. (Courtesy of Julia Gerwe)

I'll admit: One of my character flaws is a tendency toward thinking in black and white. I've been stubborn for as long as I can remember, and holding opinions to be 100% true or 100% false typically makes them easier to stand by. Living in the gray can make life messy.

During my collegiate years in St. Louis, I leaned into communities of like-minded individuals. I became a city-body, entrenched in the injustices facing urban, marginalized communities. I also studied political science, analyzing threats to democracy and the impacts of various policies on those who most needed protecting.

There were nuances in all of this, of course, but attending college during the 2016 election and through the Trump administration — a time when civil political conversations among those with divergent opinions were becoming impossible to have — only amplified my own beliefs, my preexisting worldview, and the obstacles facing my known communities. Organizing information and issues into clear dichotomies is simply easier. 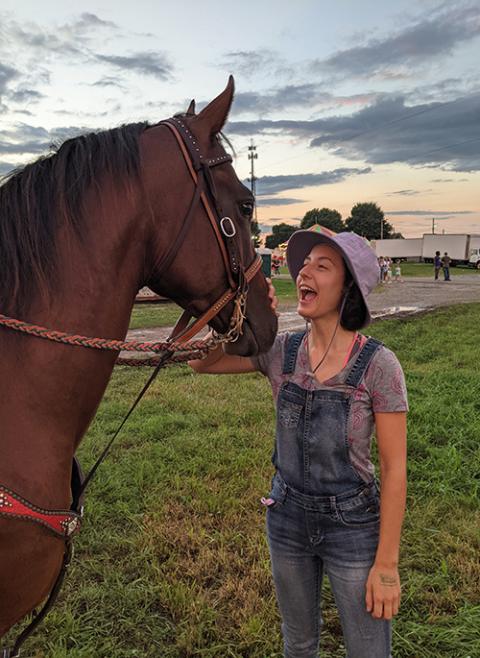 I met this four-legged friend at the Nelson County Fair in the summer of 2021. Living in a rural community has led me to embrace open-mindedness about local traditions, such as the annual fair and horseback riding. (Courtesy of Jane Rudnick)

If you asked me during that time where I would be today, my answer would not have been "in central Kentucky." Living in a rural (or even semi-rural) community was so far off my radar that some of my college friends still find it funny that I'm loving life at Nazareth.

In my mind, and certainly in many others', there is a clear cultural, political and ideological divide between rural and urban in this country. It seems the perfect geographical battleground for the ideological wars to play out.

And play out they do time and time again in rhetoric, conversations and media: the liberal urbanite vs. the conservative farmer, a new, metaphorical North vs. South. I won't pretend that I haven't held this mindset for so long.

Recently, however, in a sort of culmination of various experiences that have forced me to ponder this very theme, a book I was reading called me deeper into reflection on my own preconceived notions and this seemingly irreconcilable division. The book? None other than A Sand County Almanac by Aldo Leopold, the father of wildlife ecology. The author it inspired? Barbara Kingsolver, a fellow Kentuckian, who wrote the 2020 introduction to Leopold's text.

"We listen and take our truths — all of us — from people we trust, who know us and have our interests at heart. This is a built-in bias of the human psyche, and the crux of the fix we're in as we stand in nations divided against themselves. As long as we live in entirely separate worlds, without comprehension of the others' language or daily grinds, the door between us is sealed. Not a word will pass from one side to the other."

Kingsolver writes this quote in the context of a nation (and world) divided on how to best care for our planet Earth, yet I find her writing to hold water with various issues and conflicts plaguing our world. How, indeed, can we understand each other's points of view without understanding one's daily grind?

My daily grind in Nelson County, Kentucky, has been very different than my previous suburban and urban living experiences. This has thrown my rural/urban paradigm into chaos. People — and life — often move slower here, which is sometimes required when, for instance, driving behind a tractor on a one-lane road for 20 minutes. People — and life — also seem more in tune with the Earth and her cycles here, which is required when growing crops, rearing animals, and living off the land. 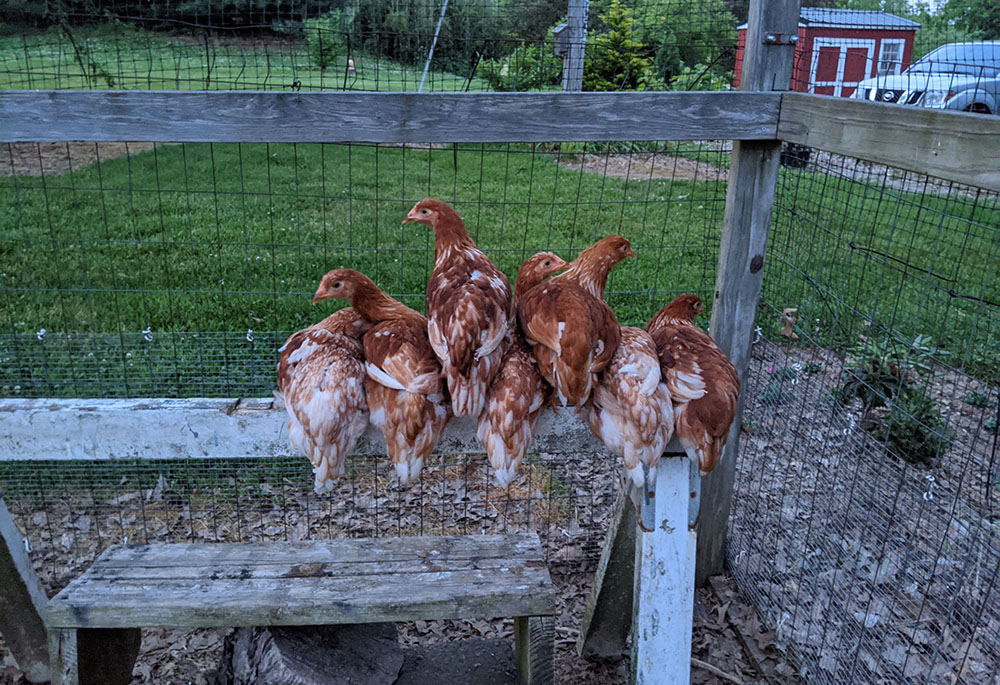 These chickens gather in their coop before nightfall. I recently helped a friend "critter sit" and watched the family's chickens, cats, and dogs. Of them all, I must admit that watching and interacting with the chickens was my favorite. (Julia Gerwe)

Both slowing down and reconnecting with the Earth have been healing and transformative for me on a personal level but have also allowed me to better understand and build relationships within my new community. These ruminations have led me to explore what really separates us as communities, as a country, and how these perceived dichotomies (rural/urban, liberal/conservative, you name it!) only intensify that when instead, recognizing and appreciating our differences could be the key to greater unity and understanding.

While we know that an immediate stop to burning fossil fuels is the best way to stop further planetary warming, people living in rural settings will have a much more difficult time straying from gasoline-powered vehicles and farm equipment. The infrastructure (i.e., public transportation networks, easily accessible city centers) isn't there, and, unfortunately, neither is the technology. (The first electric pickup truck just hit markets last fall, and we all know that pickup trucks are required to navigate off-road terrain and country roads.) 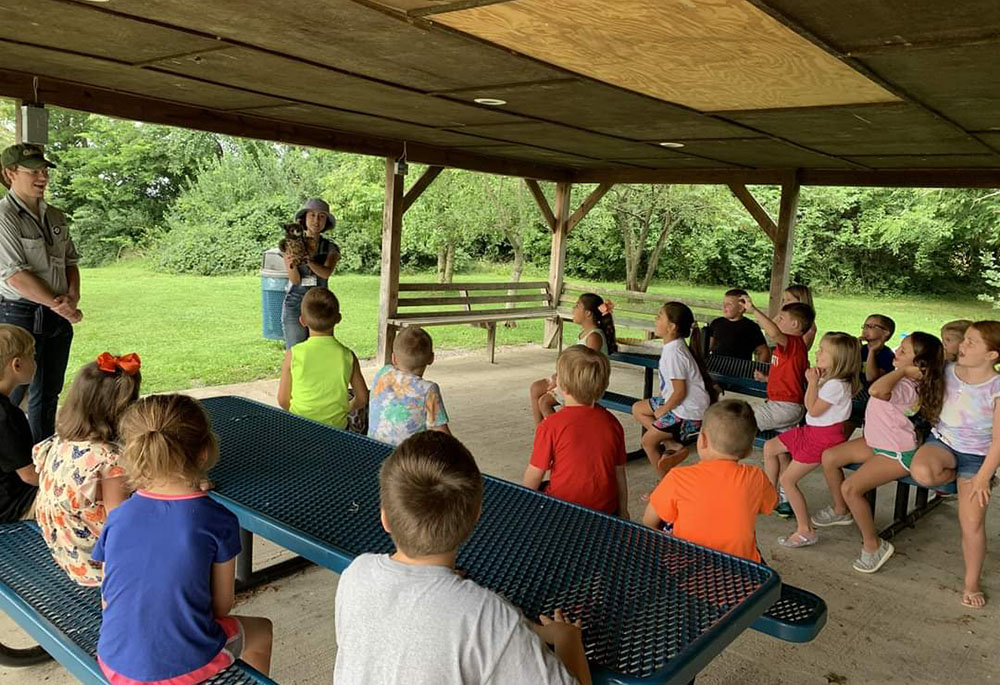 As part of a 2021 summer enrichment program, I taught children from a rural school district about animal interactions in ecosystems. Many of these students are familiar with the animals my team and I bring in — they grow up exploring the outdoors often. (Courtesy of Jane Rudnick)

The same goes for eating meat and transitioning to renewable energy. Throughout Kentucky, cattle rearing and coal mining constitute cultural longevity. Families have raised, slaughtered, eaten, and sold beef for generations, just as families have worked in coal mines to power our state's (and nation's) development. Generations of sustenance cannot be forgotten, and that's why it is scary and polarizing to discuss an energy transition. As Barbara Kingsolver further states in her introduction to A Sand County Almanac, citing this example and others: "I can tell you that it has never been harder to be a rural person in America."

My day-to-day interactions in my rural community shed light upon a tight-knit, supportive network of those who know themselves and know the Earth. No matter where you fall on any cultural/political spectrum, that's a beautiful perception we all want. So what will it take for us to be open to seeing "the other" as one and the same?

A recent newsletter from The New York Times alluded to the reality that "extreme inequality is shaping American society," citing that the share of national wealth owned by 0.00001% of Americans — 18 households — has risen by a factor of nearly 10 since 1982. Globally, scholars note that while inequalities between countries is falling, income inequality within countries is rising, creating, as U.N. Secretary-General António Guterres writes, "a vicious cycle of inequality, frustration and discontent across generations."

Cycles of poverty resonate with so many, even across political and cultural divides, though they are certainly amplified to different degrees according to one's privilege and status associated with identity, race, gender, etc. These manmade economic and political systems were never intentioned for us all to be winners, so it's not entirely surprising that most of us, including our planet, are losers.

What, then, is the opportunity amid humankind's role as part of the problem? The reality that we have the ability to be part of the solution.

When I drive through the winding, country roads near my town, I see this in real time.

Some fields stretch as far as the eye can see, planted with a single crop (usually corn or soybeans) tended by tractors with boom pesticide sprayers, problematic on a large scale from a soil/ecosystem health and human health perspective. However, some fields are flourishing this spring, with early season crops planted in patches near swaths of fields alive with native wildflowers or, better yet, forested areas with diverse species and minimal disturbance — a solution. 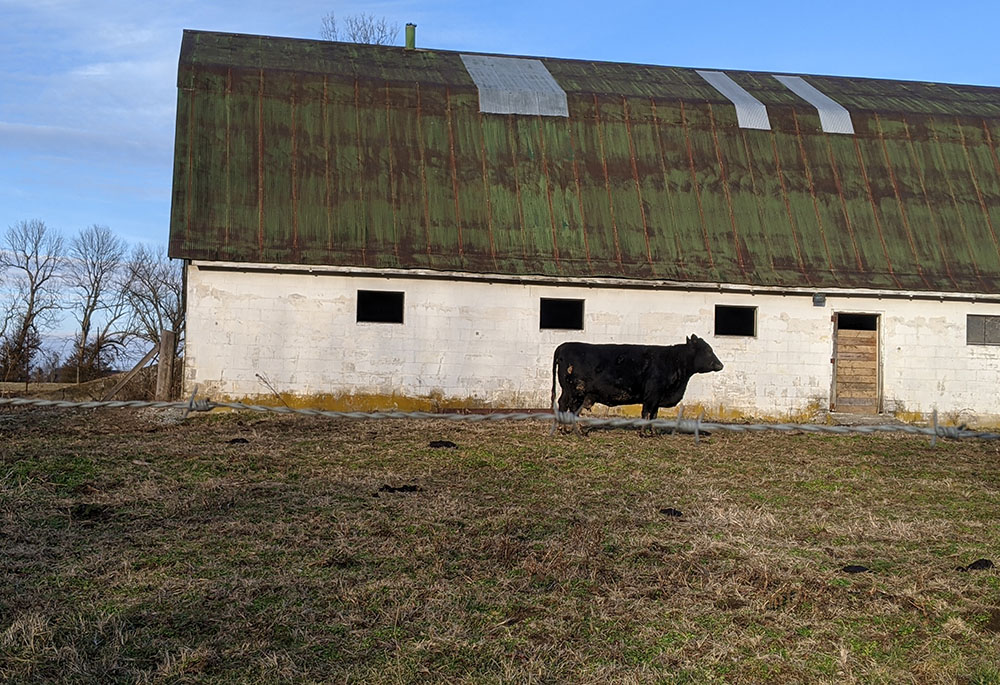 Abutting the Sisters of Charity of Nazareth's property in Kentucky is this small-scale farm, including cows that often greet me throughout the day. Hearing animal noises such as these is newer to me, as I haven't lived in a rural area for very long. (Julia Gerwe)

Many folks who live off the land have learned how to not plunder it beyond repair and regrowth, and opportunities abound for communities to learn conservation strategies to boost harvests. These conversations are happening, and it's exciting to see creative and regenerative solutions take shape.

What, then, will it take for us to see "the other" as one and the same? Kingsolver, once again, hits the nail on the head: "Salvation begins with love."

If this sounds too "woo-woo" for you, I challenge you to think about the feelings driving your own beliefs: fear, anger, anxiety, empathy? If you can believe what you do based on what you feel and hold to be true, why not give patience and love a chance in understanding a seemingly opposite worldview? (Check out this organization doing this work on a macro scale, as a dear sister friend recently shared with me.)

If we all approached the Earth and each other with a little more kindness, could you imagine the solutions we could dream into being together?