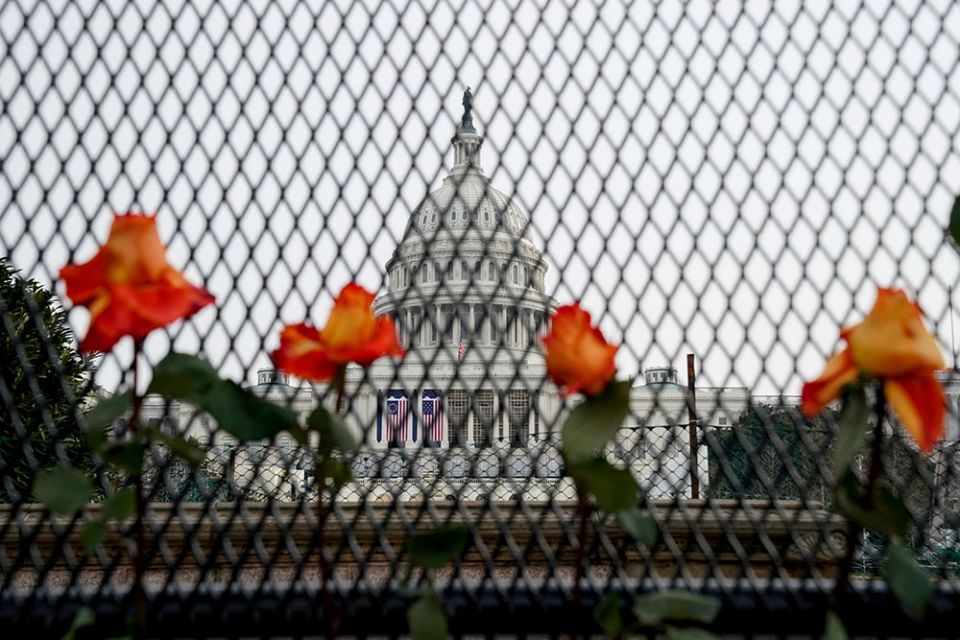 Flowers are placed in security fencing around the U.S. Capitol in Washington Jan. 11, days after supporters of President Donald Trump stormed the building. (CNS/Reuters/Erin Scott)

For 15 years, I walked in and out of the offices of our U.S. representatives and senators and spent hours in the Capitol waiting to discuss Network's positions on legislation being discussed and voted upon. So the attack on the Capitol on Jan. 6 was visceral for me.

Memories came flooding back. How I taught thousands of people how a bill becomes a law; how to lobby; how to be responsible citizens; and how to feel at home in our nation's Capitol. In the wake of the attack, I wondered how I would teach it now.

I participated in many protests and marches through those years. Many were quite large and nonviolent. Of course, there was always the possibility that a fringe group from either side of the political spectrum might join the group and create some disturbance. But the organizers of the event prevented them from taking control. Always, the local Washington, D.C., police force was present to make sure that we followed the approved route.

What happened on Jan. 6 was not a group who came to lobby or hold a protest march.

Watching the live coverage and the subsequent video feeds, there is no doubt that what might have started as a rally turned into a mob who attacked the Capitol with the intent to destroy property and inflict bodily harm. More alarming and seditious is that President Donald Trump stoked their anger with his false claims about a stolen election and urged them to go to the Capitol and "fight like hell," otherwise "you're not going to have a country anymore."

These actions and all those complicit in them must be held accountable.

As I write this, I realize that there were many others present at this event responding to the president's call to gather on this day, where he envisioned his last hope to overturn the election. His constant drumbeat that he won in a landslide election worked. It confirmed in many of my fellow citizens' minds and hearts that the election was stolen.

They most likely had no idea that this gathering to support the president would turn so violent.

And it is that group that was there not participating in the violence, and the millions of Americans who voted for Trump, who cannot be ignored or simply tolerated as we begin the Biden presidency.

The work that I have been doing these past years with "Enter the Chaos: Engage the Differences to Make a Difference" convinces me that having my side or position win does not bring about lasting change. It may bring about some policy shifts, but if we don't address the legitimate needs and concerns of everyone, including those who lost, the change we hope for is temporary.

Too often, the losing side watches the clock between elections. A massive amount of money is raised and spent on getting candidates, increasingly ideological and partisan, to run for office.

Once they are in power, the advances of the previous administration are often reversed, and new policies are put in place. The cycle begins again.

What happened on Jan. 6 makes that approach untenable. The stakes are too high and the divisions too great to do what we usually do.

There has to be a national effort to begin to repair the great divide among us as a nation.

That effort has to seep down into each of our families and local communities.

And it has to start with each one of us.

To paraphrase a quote often attributed to Einstein, the problems of today cannot be solved from the same level of consciousness that created them. Consciousness is not an everyday word but it is a critical one. It is how we make sense of the world and how we view ourselves and others. Consciousness shapes our assumptions, values, beliefs and worldviews. Sadly, too often — like the air we breathe — we aren't always aware of those things until something happens that threatens what we think we know or believe.

The call of Jan. 6 is to start waking up to what we assume about so many things.

We live in a "postmodern" world with its broad skepticism and relativism, and we can no longer afford to believe that everyone sees the world the same way. The meaning of words like democracy, my rights, common good, flag, law and order, respect for each person, faith or truth cannot be taken for granted anymore. Their meanings need to be explored. It is as if our consciousness offers us a pair of glasses to view reality. Some of our glasses have similar shapes, colors or magnification, but there are multiple glasses providing very different perspectives through which each of us sees.

To begin a process of healing and repair, we need to become aware of what goes on within one's self when we react to those with whom we disagree. What we believe to be true and the "right way" to do anything. How we defend our positions and prevent different ideas from getting in. Why we'd rather dismiss or ridicule those who are on the other side rather than to be curious as to why they feel and think that way.

Contemplative practice invites us into that consciousness, into the process of discovering our true self. In that process of transformation, one's capacity to "see" expands so that the multiple perspectives come into focus. Over time, one wants to change behavior and respond rather than react to difficult situations. One listens and speaks from one's contemplative heart.

More and more, I am convinced that to understand this transformative power of contemplation, contemplative practice cannot be seen in isolation from the broader context of our lives. Our spiritual journey is part of the evolutionary process. It develops as does our consciousness.

I've found the wisdom of Spiral Dynamics Integral very helpful in providing an understanding as to why there are such differences among us. It explains how consciousness evolves in a developmental way and that there are emerging stages of consciousness with new possibilities for action and transformation. These emerging stages, with their way of knowing and being, remarkably resemble the insights of the mystics.

We know that deepening one's contemplative practice is never just for one's own transformation; rather, it is also for the transformation of the world. Where the contemplative transformation into one's true self coincides with the emerging stage of consciousness addressed in Spiral Dynamics Integral, we awaken to new possibilities to respond to the problems of today.

A new consciousness is urgently needed, one that flows from a contemplative heart.

Then one is ready to enter the "space" created by the differing worldviews that have evolved over time and are operative today. The words of David Bohm, theoretical physicist and author, remind us that the revolution starts within. "Suppose we were to share meaning freely without the compulsive urge to impose our view or conform to those of others and without distortion and self-deception. Would this not constitute a real revolution in culture?"

[Nancy Sylvester is founder and director of the Institute for Communal Contemplation and Dialogue. She served in leadership of her own religious community, the Sister Servants of the Immaculate Heart of Mary, Monroe, Michigan, as well as in the presidency of the Leadership Conference of Women Religious. Earlier, she was national coordinator of Network, the national Catholic social justice lobby. You may be interested in the current ICCD program, "Enter the Chaos: Engage the Differences to Make a Difference," offered online. For information, go to iccdinstitute.org.]

Spirituality | The revolution that begins within

Life is a diamond that we hone