Who do you want your house to fall on? 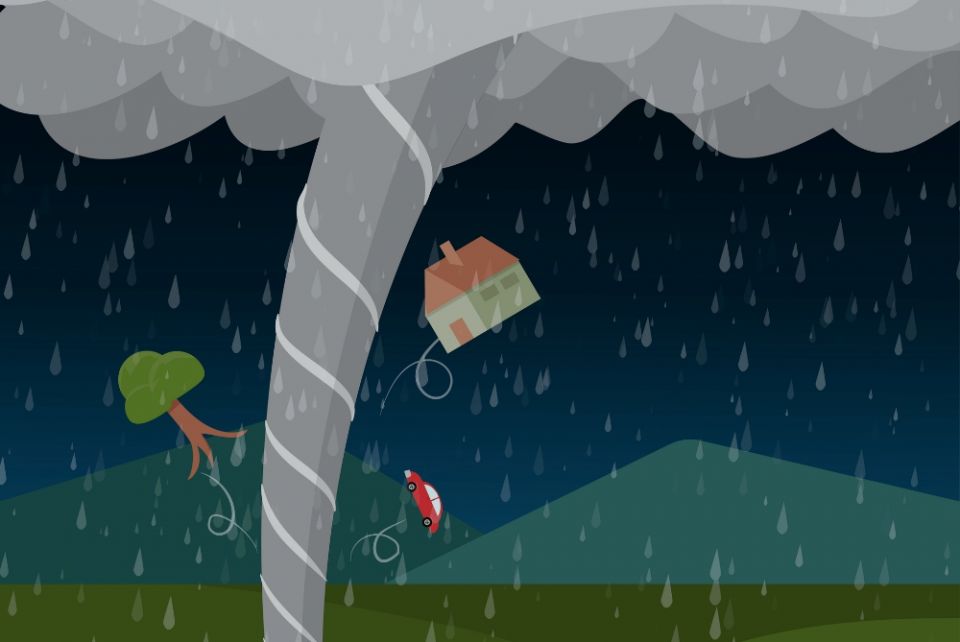 As I packed my briefcase to leave the office and head out to give an evening presentation, a work colleague alerted me that the weather for travel might be challenging. "They're predicting heavy rains and possibly even a tornado," she said. "So be careful. Are you sure you should be driving this evening?"

I looked out the window and saw rain but it didn't look that forceful. Cars driving by had their wipers going, but pedestrians with umbrellas seemed to be walking along without distress. "Is the weather going to be all that bad?" I asked. "I'm heading north only 50 minutes' drive away, which is the opposite direction from the storm, so I should be OK." Then seeing the crestfallen face of the co-worker because I was dismissing her alert, I joked, "Well, I'll see you tomorrow unless you see a little red car swirling around in a tornado."

Not amused, she said, "And if there really is a tornado, you heard it here first, so be careful. But here's a question for you: Who would you like your house to fall on? You know, like Dorothy in The Wizard of Oz. Her house from Kansas landed on the Wicked Witch of the East and killed her. That caused the Munchkins great joy because the witch could no longer terrorize them."

"What a great question," I respond. "This year, 2019, is the 80th anniversary of "The Wizard of Oz" movie — is that why you mentioned this?" She shook her head no. "Well, I'll have to think about who or what I want my house to fall on," I said. "And if the trip ahead is an uneventful drive to the event and back, there'll be plenty of time to ponder such an important question."

So the trip got underway; most of the travel was uneventful despite serious rain for several minutes at a time, and I did think about my colleague's question. Hmmm, who would I want my house to fall on? Immediately, I recalled "The Wizard of Oz" movie scene when Dorothy was surrounded by delighted Munchkins after her house killed the Wicked Witch of the East; her sister, the more evil Wicked Witch of the West had arrived and was menacing everyone with threats. Not to be intimidated, Glinda, the Good Witch, waved her wand dismissively and said, "Be gone before somebody drops a house on you, too."

For starters, I'd want my house to fall on priests who've molested people and the clergy higher-ups who've sheltered these abusers. Many of those persons are dead now and can't harm anyone else, but we're nowhere close to the worldwide truth about this horrible situation.

A corollary to that would be wanting my house to fall on anyone who feels that aborting a fetal heartbeat isn't murder.

Those were easy. So who else would I want my house to fall on? A pretty long list actually:

So if my house fell on all of those, what would we have left? We'd have daily life in which positive and encouraging news would be the focus because there wouldn't be violence, crime, wars or conflicts to report. People worldwide would have a better chance of self-actualizing and achieving their potential.

We would look at each other with accepting eyes. We would respect each other. We would safeguard our Earth. We wouldn't need community meetings about how to stop the gun violence by young people. And Sears wouldn't go out of business.

Spirituality | Who do you want your house to fall on?

This Epiphany season, let us reclaim our soul

'Life has changed, not ended': Moving forward this Easter season