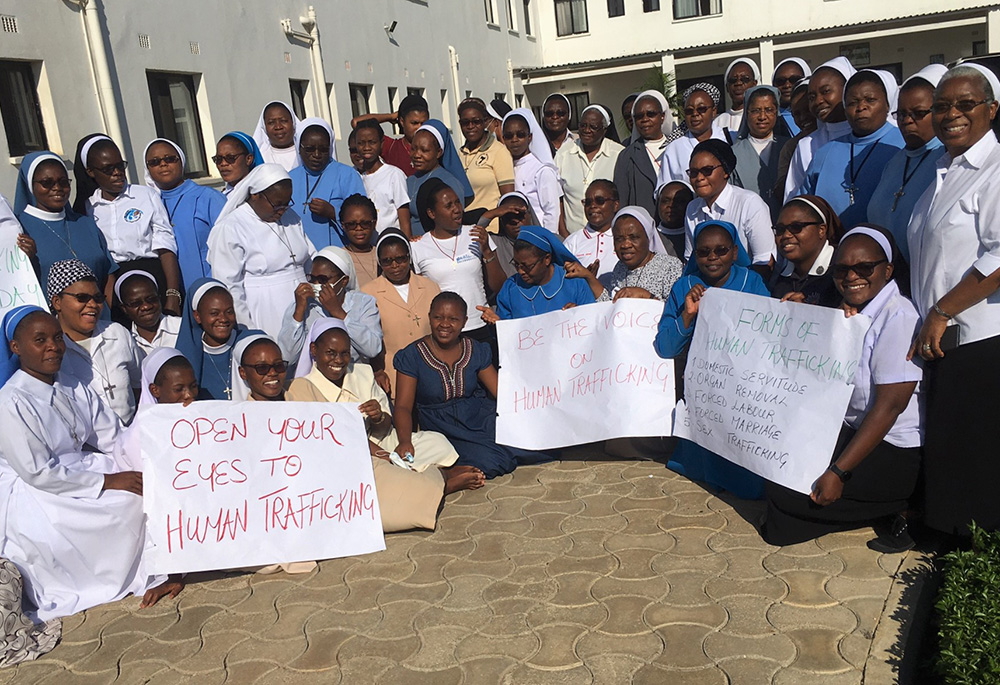 Sisters from across Zambia attended a workshop in November 2021 in Makeni, Lusaka, on advocacy against human trafficking. The sisters stand with the signs they made as part of their awareness-raising efforts. (Sr. Eucharia Madueke)

Over 62 Catholic nuns from across Zambia, representing 45 religious communities, gathered last fall in Makeni, Lusaka, at the City of Hope Retreat Center in Zambia to reflect on "Religious Vocation, Church, Society, and Prophetic Witnessing."

This workshop was part of the Africa Faith and Justice Network (or AFJN) Washington, D.C. Women's Empowerment Project, aimed at helping sisters see how their religious vocation and their faith call them to be justice advocates.

The workshop was also intended to help the sisters reflect on the importance of being the voice of those who are not often heard — and those in our societies who, as Pope Francis puts it, are often neglected and consigned to the margins of society — mobilizing the energies of these sisters for engagement in the public square, through advocacy rooted in Catholic principles and values. 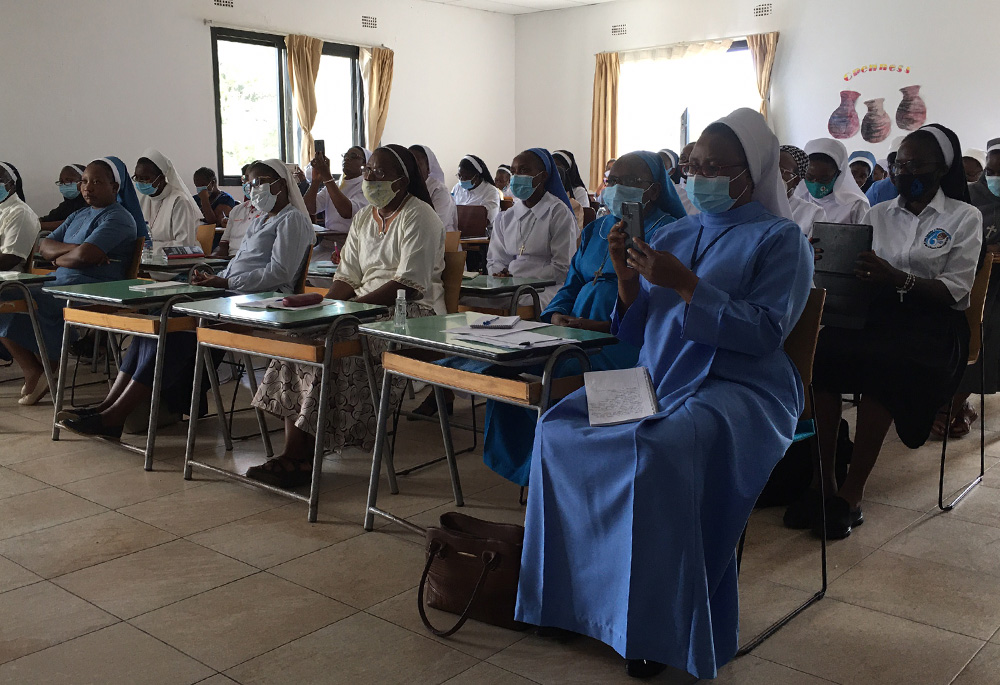 – Sisters at a workshop in November learned that Zambia is both a destination and a ‘sending’ country for victims of human trafficking. (Sr. Eucharia Madueke)

The sisters gathered on Nov. 13, hearing a social analysis from the African context, the biblical foundation for advocacy, and advocacy steps and strategies. They also reflected on issues affecting Zambia — human trafficking, the environment, foreign nations including China, multinational corporations, exploitative activities, impact of investments, land acquisition, unemployment, and challenges faced by families — and ways these violate the rights and dignity of the human person created in God's image.

International Day of Prayer and Awareness Against Human Trafficking

Join others around the world on Feb. 8, the feast day of St. Josephine Bakita, the patron saint of trafficking survivors, for the International Day of Prayer and Awareness Against Human Trafficking. This year's theme focuses on the economic imbalances that victimize women and underlies the scourge of trafficking, which you can learn more about here.

The U.S. Catholic Sisters Against Human Trafficking is organizing the U.S. portion of the "prayer marathon" which begins around 10 a.m. EST. The livestream is available on the UISG YouTube channel and here. USCSAHT has also prepared a trafficking prevention Toolkit 2022 with resources for the Feb. 8 celebrations and for ongoing efforts to end human trafficking. The kit includes information about human trafficking and how to end it; prayer and faith resources; shareable social media posts; and other resources.

For information on how migrants and refugees can be particularly vulnerable to trafficking, see the anti-trafficking page of the U.S. bishops' Justice for Immigrants website.

Zambia acceded to the Palermo Protocol to prevent, suppress and punish trafficking in persons in 2005, yet the country remains the source, transit and destination country for men, women and children trafficked for the purposes of forced labor and sexual exploitation.

Just as in other parts of the world, an intricate network of actors — including transporters, border control agents, acquaintances, relatives and workers in massage parlors, casinos, brothels, employment companies and employers of domestic servants — continue to facilitate human trafficking in Zambia.

These trafficking rings exploit Zambians and people from Asia and other African countries in the mining, construction and manufacturing industries, casinos and massage parlors. Unfortunately, there was no known public government forum to educate the masses and create public awareness about human trafficking to help the masses protect themselves.

Conscious that human trafficking violates the dignity of the person and affects most aspects of Zambian society — families, children, students, domestic and migrant workers, young people searching for a better life, and young people in the hospitality industry — and saddened by the general complexity in both the government and general public, the sisters were convinced that this is the time their prophetic voice is needed in the public square to break the silence that sustains the evils of human trafficking in their society. 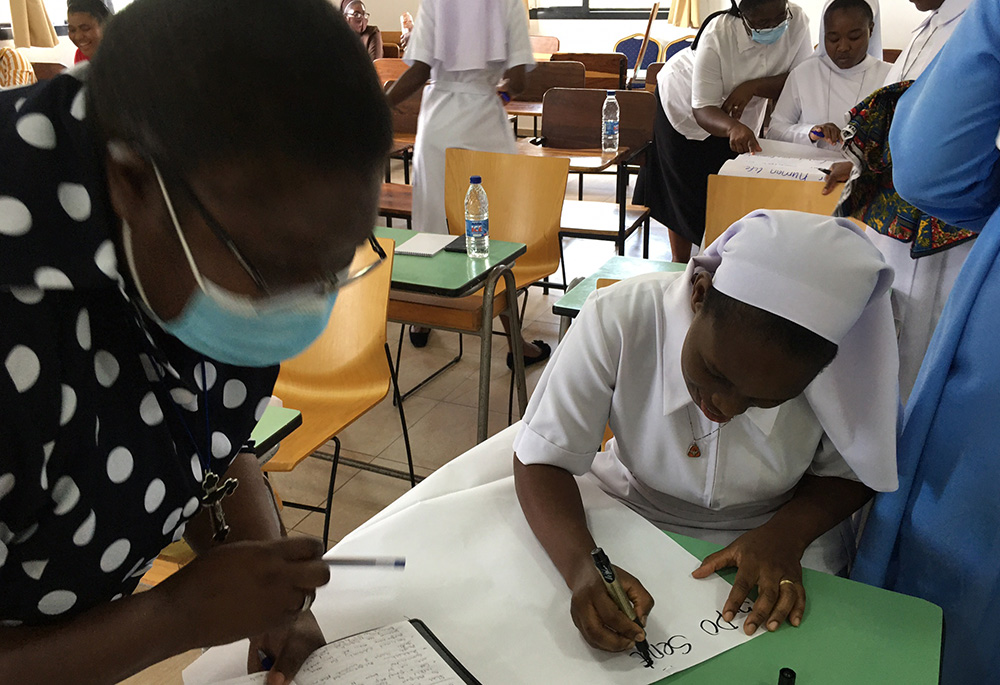 Sisters also worked in small groups during the workshop and prepared for their role as advocate for greater enforcement of anti-trafficking laws in Zambia and to raise awareness of the reality of trafficking in the country. (Sr. Eucharia Madueke)

This realization and conviction moved the sisters to public action to end the silence around human trafficking. During the oral evaluation of the workshop, one of the sisters stated that: "As prophetic women, [we] have a duty and obligation to speak out on issues that affect poor people in our midst because if [we] don't, then nobody else will do it." 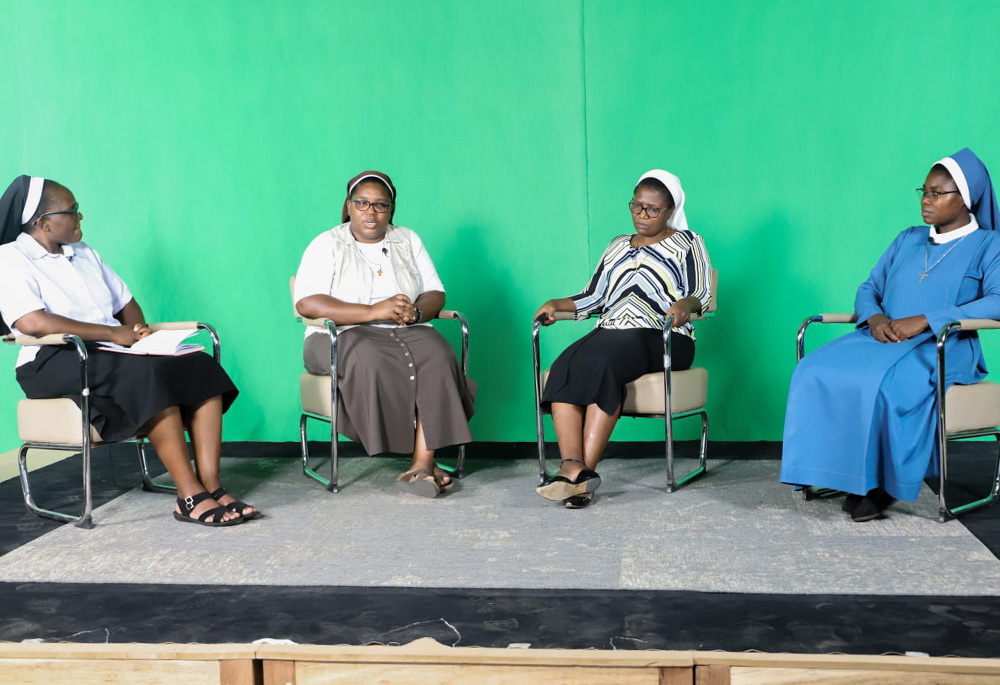 The sisters also engaged the government, paying advocacy visits to four government ministries — immigration, home affairs, the vice president and the chief justice. They also visited the director of the international bus station in Lusaka because this bus station was identified as the continental hub and transit center for human trafficking. The sisters demanded that government efforts to combat human trafficking in the country be intensified, urging the government to enhance its efforts by mobilizing the appropriate government agencies to work collaboratively to:

As the sisters tasked the government to protect both Zambians and all that come through its border through trafficking, they pledged to continue to work to promote the common good as individuals and as a group, tackling this evil of human trafficking affecting their country. They pledged to organize awareness seminars in their communities and institutions under their care, to provide counseling to rescued victims, and to find ways to reintegrate victims as productive members of society.

At the end of the workshop on Nov. 17, the AFJN team was happy to see that the sisters returned home feeling empowered to address issues of injustice in their communities — especially as perpetuated by human traffickers. One of the sisters promised, "I will practically find out how much human trafficking is going on in the Copperbelt to see how I can be a voice to the voiceless there."

We were grateful that Loyola TV promised to give the sisters another opportunity in December to continue to educate the masses on human trafficking and other issues of great concern to the sisters. And we are glad that Zambia has joined the ranks of the other countries where we have offered these workshops!