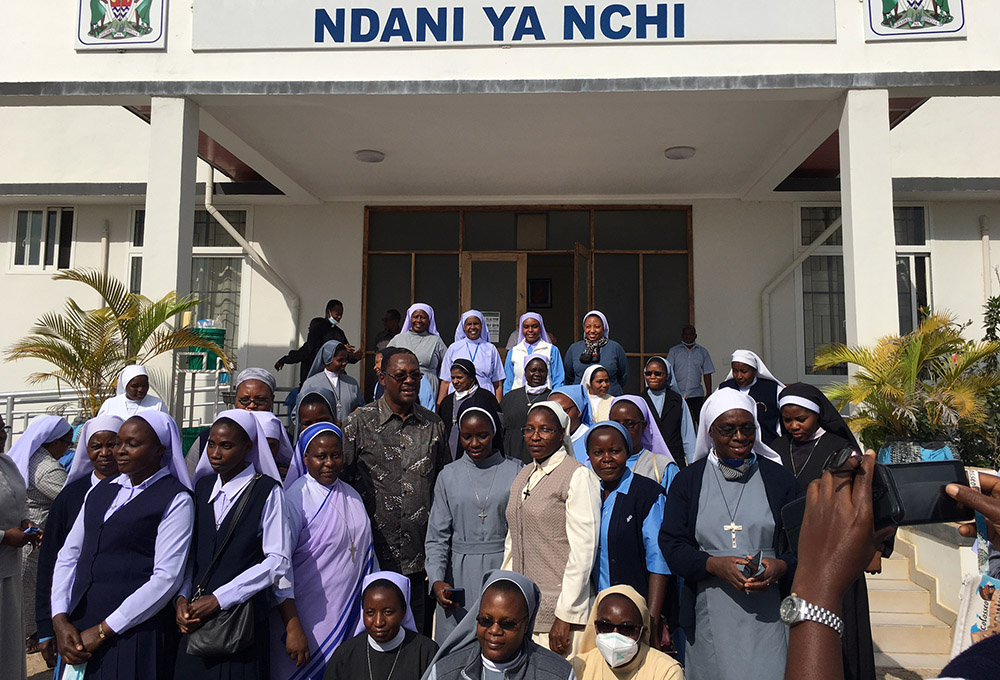 A delegation of sisters and workshop facilitators stands with George Simbachawene, minister of home affairs of Tanzania. Rose Barnabas Kisanga called the advocacy visit to Simbachawene's office a highlight of the workshop. The workshop was organized by Africa Faith and Justice Network and the Tanzanian Catholic Association of Sisters. (Courtesy of Sr. Eucharia Madueke)

In mid-August I traveled 12 hours to Tanzania's capital city, for a workshop organized by Africa Faith and Justice Network, or AFJN, and the Tanzanian Catholic Association of Sisters. I was excited about representing my congregation, meeting other sisters, and learning something new.

I was not disappointed. Over the course of three full days, 88 sisters, from different religious communities from all over Tanzania, studied issues of justice, human dignity, child protection human trafficking (globally and particularly in Tanzania), and advocacy as a Christian vocation. It was an eye-opener and a moving experience.

Notre Dame de Namur Sr. Eucharia Madueke, AFJN coordinator of women empowerment, reflected on the song "Who will Speak?" ("Who will speak if you don't?") — for the poor and the broken, the oppressed, the voiceless, abused children and women, the shunned and outcast … the weak and the aged? Who will speak truth in places of power, "Who will speak so their voice will be heard?"

Using Scripture passages from Genesis 1:26-28; Isaiah 1:17 and Amos 8:5-6, she highlighted the situation of suffering humanity at risk of being trafficked and tortured. It was a deep reflection on the dignity of each person and how important we are before God.

I found myself crying quietly while writing: "There are so many issues that are being done and are going on in our society which are destroying human dignity, [such as] child abuse and [the abuse of] vulnerable people." There is a lot of suffering in the society that needs us to stand up and speak out, to work and care for them. I have and must raise my voice for the voiceless. Who will speak if I don't? We need to go around to listen, hear and see what people encounter in their day-to-day life in our villages and the societies around us. We need God's grace and mercy to help and rescue the suffering humanity, vulnerable people who are at risk of being abused and trafficked. We are the ones to speak and raise our voices for the voiceless." 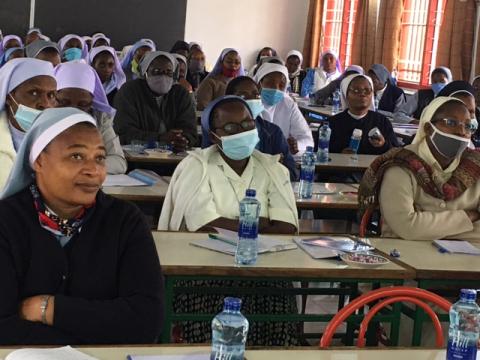 Sisters listen intently during the workshop organized by by Africa Faith and Justice Network and the Tanzanian Catholic Association of Sisters. (Courtesy of Sr. Eucharia Madueke)

Most of the input from the many presenters who followed was very new to me and the other participants.

In an interactive presentation on social analysis Fr. Barthelemy Bazemo showed the link human trafficking has with rape, labor violations, sexual exploitation, kidnapping, prostitution and murder; and how lack of access to education and information was linked to child marriage.

Fr. Aniedi Okure said human trafficking is just a modern fancy name for slave trade — in some ways, worse than before. Technology and our global linkages have facilitated human trafficking in new ways, and relatives and friends are often implicated. He reminded us of the saying: "the ruin of a nation begins in the homes of its people."

Many trafficked victims from Eastern Africa are taken to Middle East countries under the pretext of employment. Once there, passports and other identity documents are taken from them, they are objectified and subjected to all kinds of inhuman treatment—slavery!

I felt particularly hurt when Father Aniedi quoted a woman who said: "I cannot help it, but when I see an African, I see a slave." Our sisters, nieces, and daughters, brothers and nephews are objectified, treated as disposable goods, and subjected to all forms of indignities. I was equally shocked to learn that some people are trafficked for organ removal.

Denis Mpagaze, commissioned by Africa Faith and Justice Network in 2020 to research human trafficking in Tanzania, interviewed 1,200 people: only about 2% showed an understanding of human trafficking. We got a good laugh when we learned that some people thought that it was about those people who stand on the road waving motorists for a ride. Most of those interviewed did not know about internal trafficking — done within the country, from villages to cities, under the false promises of education, job opportunities and a better life. On arriving in the cities, they are subjected to forced labor, sexual slavery, or inhuman treatment.

Dodoma District Regional Police Commander Teresia Mdemidemi discussed human trafficking in Tanzania: what it entails, how big the issue is, the laws and punishments, and the difference between human trafficking and smuggling.

Sister Margaret from Uganda shared with us how — after an Africa Faith and Justice Network workshop — they made advocacy visits to six government ministries and the Ugandan Parliament. Their advocacy resulted in a revision of the labor export law (that provides a loophole for traffickers), the elimination of a practice of bringing young girls from rural areas to beg in the streets of Kampala, and numerous educational public radio programs.

Father Aniedi reminded us that we are all called to be advocates, and that it is scriptural: Abraham's plea for Sodom and Gomorrah (Genesis 18:16-32); Queen Esther, who risked her life for her people; the persistent friend in Luke 11:5-8; and Jesus, who referred to the Holy Spirit as the "Advocate" (John 15:26).

To fulfill a fruitful work of advocacy, we need to educate — gather information; organize — build coalitions and networks; and lobby — advocate for change with those who have the power to do so.

The workshop helped us understand our obligation as Christians and as women religious to speak out against injustice, to be advocates for others, to heed the counsel of St. Catherine of Siena who reminds us, "Speak the truth in a million voices. It is silence that kills."

Many of us have been empowered through this workshop, we have found our voices, and we are speaking out — raising awareness in schools and in town hall gatherings, advocating for the vulnerable members of our society, and urging those in authority to address the ills in our society. We see that we need to be strong and courageous in facing the challenges that might arise. We shall not be silent.

A highlight of our workshop was an advocacy visit to the Honorable George Simbachawene, the minister of home affairs of Tanzania. Part of his responsibility is to save lives and properties and provide community service to Tanzanians. We asked him to use the authority of his office to protect the lives and dignity of Tanzanians who are objectified and exploited through human trafficking; set up the mechanism to protect migrant workers who are abused and exploited; and establish a forum for creating awareness in the wider public, especially in the rural areas from where many of the victims are taken.

The minister was impressed that Catholic sisters were taking up the cause of advocating for victims within our society, and that we are tackling societal justice issues in places where we work, and other institutions. He promised to use the authority of his office to implement what we asked him to do nationally.

Since then, Sr. Cecelia Boniface of the Little Sisters of St. Francis of Dar es Salaam has joined forces with me to conduct follow-up training on child abuse and human trafficking. We have done advocacy visits with the district commissioner, social welfare officer and other dignitaries. We have done radio programs, and we have educated sisters in our communities and staff in our institutions. As a result, two nongovernmental organizations who have seen us in action have asked us to partner with them.

Now I understand that the work of justice, peace and advocacy should not be separated from our ministries, whatever they are. I pray that God will give us the courage to speak out in the face of evil and injustice, for who will speak if I don't?