Skip to main content
This story appears in the Making Peace and Rwanda feature series.

When Sr. Mary Rose Mukukibogo first approached women in Gisagara, southern Rwanda, about starting an agricultural association, they were furious. It was 1997, three years after the 100-day genocide in 1994 that killed more than a million people during the fighting and the chaos afterwards. Mukukibogo, a member of Les Soeurs Auxiliatrices (Helpers of the Holy Souls), remembers walking from house to house in the district near the southern city of Butare, asking them if they'd like to join a farming cooperative.

In 1994, Rwanda lost 13 percent of its population in the course of a single season, the result of a civil uprising between the Hutu, a peasant majority, and the Tutsi, the minority ruling class. After the genocide, infrastructure lay in ruins. The rural farmers, who had barely eked out a living before the killing, found themselves thrust deeper into poverty. Most men of working age had been killed, were imprisoned or fled to neighboring states as refugees, making economic recovery even more challenging.

"It was very difficult for them to do any type of activity, because their spirit was so low," recalled Mukukibogo, a genocide victim herself who lost multiple siblings in the genocide. "I started to accompany them to have hope in life."

Rwanda is a communal society, and farming associations have been a part of community life for hundreds of years, through "Ubudehe," or mutual field cultivation. Slowly, Mukukibogo built a group of genocide victims, all of whom had lost their husbands, to start farming together.

Charlotte Nyiromasuhuko, 58, was one of the first women to join, and today she is a respected leader within the group, divvying up jobs and overseeing the harvests. "I wanted to join a group to talk and move away from isolation," Nyiromasuhuko said, of the difficult period directly after the genocide. "I joined this association to move away from isolation and fight against the hard times."

After two years of working with just genocide victims, Mukukibogo challenged the women again, opening the farming association to those whose husbands were in prison for genocide crimes. This forced Hutu and Tutsi women together, just a few years after ethnic hatred between the two groups had boiled over into wanton killing.

Rwanda is a unique situation in that the perpetrators and the victims were forced, almost immediately after the genocide, to live side by side. Visit Rwanda today and it is impossible to tell who is Hutu and who is Tutsi. This is partly due to a Rwandan law that made talking about ethnicity illegal, and partly due to a countrywide desire to concentrate on the future and rebuild the Rwanda as a technology and innovation hub. But this process didn't happen overnight.

Sisters have been intimately involved with the healing and reconciliation process in Rwanda since the genocide, even when they were suffering from post-trauma themselves. Many of the sisters came from mixed Hutu-Tutsi congregations. Early on, they understood that offering communal support to both the perpetrators and the victims, at the same time, in the same groups, has a special value. Sometimes, the simple act of having daily interactions with the other side is as integral a part in the healing process as the therapy itself.

"At the beginning, there was fighting between the women, not physical, but with words," Mukukibogo recalled of the days in 1999 when Hutu women first began to attend the farming association meetings with Tutsi women.

"At the beginning there was a fear from each other," said Nyiromasuhuko, who lost her husband and multiple children during the genocide. "But once we started to talk, we were slowly, slowly, gaining trust. When the other members [wives of the genocide perpetrators] joined, the fear was diminishing as each other was sharing. The fear was moving out slowly until it was possible to be together."

"Before, we were very, very quiet," said Groleise Nyitegeba, 53, whose husband was imprisoned for genocide crimes. "We had anger, but slowly, slowly, we see how life has changed. Now I can dance, I can talk; neighbors say to me, 'What has happened to you?' Even families who lost their family members [as genocide victims] will talk to me now."

They christened their association "Dususuruke," which in the local language of Kinyarwanda means "warm solidarity."

"It was always easy to put people together in Rwanda [from the two ethnic groups]," said Mukukibogo. People were always together. The genocide happened because politics separated them."

In the beginning, the association focused on economic empowerment as a form of healing. They had vegetable gardens, potato fields, tomatoes, maize and beans, sown in neat lines in the fertile Rwandan soil. They did reconciliation work, but as time went on Mukukibogo also wanted to offer the women a more holistic approach to healing that would combine psychosocial support as well as economic opportunity.

Sr. Antoinette Gasibirege, also a member of the Holy Helper Sisters, discovered the Capacitar methodology while studying in Chicago. A genocide survivor herself, she found Capacitar, a mindfulness training that utilizes pressure points to release strong emotions, to be helpful in confronting trauma in her own life. Starting in 2006, she arranged for Capacitar International founder Pat Cane to come to Rwanda on a yearly basis to help train religious and lay people and to bring the method farther afield.

"We started with the religious [sisters], with the priests, and with people working with survivors," said Gasibirege. More than 40,000 people have taken part in her Capacitar training since 2006.

"There are not so many psychologists in Rwanda, and [professional treatment] is expensive," said Gasibirege. "Capacitar puts it in your hands, what you need to heal yourself."

Four different congregations in Rwanda use Capacitar on a regular basis, including the Medical Missionaries of Mary, the Little Sisters of Jesus, the Bernardine Sisters and St. Boniface Sisters. Other sisters, such as the Benebikira congregation, employ a "sister listener" approach, having sisters whose main ministry is simply to sit and listen to people, especially those overcoming the trauma of genocide.

Bernardine Sr. Donatille Mukurabiyiza trained under Gasibirege and has trained many women in the village of Kamonyi, where she is the local superior. She started with genocide survivors but now offers Capacitar training alongside vocational training in sewing or agriculture for anyone who wants to join.

"When people are together and you offer them the opportunity to express what they feel or think, you need that exchange," said Mukurabiyiza. "Each person needs to learn to accept each other and respect each other. After that period of exchange, they also have to think of a development activity instead of staying in suffering."

Combining psychological support with economic empowerment is an essential part of the healing process for people in rural Rwanda, the sisters say. No amount of psychosocial support can change the situation if people are still so impoverished they are worrying about their next meal.

Part of the Capacitar training, and also psychological support, is helping those emerging from trauma find ways to become economically stable. "You can have compassion without the motivation to do something, but now people have both the compassion and they take action," said Mukurabiyiza. She said the training has helped people discover awareness of their own needs and sensitivity towards the needs of others.

"People who are not genocide survivors are motivated to help others who are, especially during the memorial period," she said, referring to the period that starts on April 7 when the country marks 100 days of ceremonies and memorials. "For example, they try to help someone cultivate their field, rehabilitate their house or rebuild their fences; they really try to support others."

"To reach this level to be together and to trust each other, it was possible because the sisters were here to help us," said Gisagara association member Illuminiree Nyirautegeyimaha, 50. "If the sisters were not here, the association would not have started, and it would have taken us at least 10 years to make these connections. The sisters have used many approaches, like dialogue, prayer, taking time to think of the past, present and future, to give meaning to our lives," she said.

Each week before she visits the association, Mukukibogo takes orders from restaurants in the regional capital of Butare. Fish wasn't a big part of the local diet in the region, but restaurants are quickly finding it is a popular dish. Mukukibogo could sell more fish if she had a refrigerator and generator, but now she is limited and the association only harvests what has been pre-ordered.

On a harvest day in February, as the association members drained one of the four fish pools to fix leaks, members caught and bagged about 40 kilos of fish (about 88 pounds), which sell for 2,500 Rwandan francs ($3) per kilo.

"We were given the tools to help ourselves," adds Beretirida Nyambuga, 65, as she helps sort fish from the day's catch. "The Capacitar exercises build ourselves to fight against fear, against sorrow, so we can give of ourselves and grow our self-esteem."

Recently, genocide perpetrators have begun finishing their prison terms and are being released. The Dususuruke Association welcomes them as well.

"When they come from prison, they have fear about going everywhere," said Mukukibogo. "We want to put them in the association so they can do some work. From this process of reconciliation and building internal healing, they reach a new level of economy."

Six years ago, Jean Damascine Bizimana, 58, was released from prison for genocide crimes, and he came straight to the association to look for work. "There is a solidarity spirit here, so we are not isolated, we can be together with others, and talk freely without judgment," he said. "It has helped me to grow my economy; I am even able to pay school fees for my son, and I can pay health insurance." (Mandatory national insurance in Rwanda is $3.60 a year per person.)

At 52, when he was released from prison, Bizimana would have had to start his farm from scratch, a process that could have taken years before it was financially viable. By joining the farming association, he works the communal fish pools with the rest of the community and splits the proceeds.

"Also when I don't have the money for my son's school fees, they lend and help me; there is mutual spirit," said Bizimana. "Sometimes I even go to other [agricultural] associations and give advice. I say that being together is very important. This move from isolation takes time, but working in isolation makes it hard to make money."

Members of the Dususuruke Association are now taking on the role Mukukibogo filled all those years ago: visiting other farming associations. They go from group to group and share their experiences of how collective farming and psychological support have helped raise many in their community, from both sides of the bitter conflict, out of abject poverty. 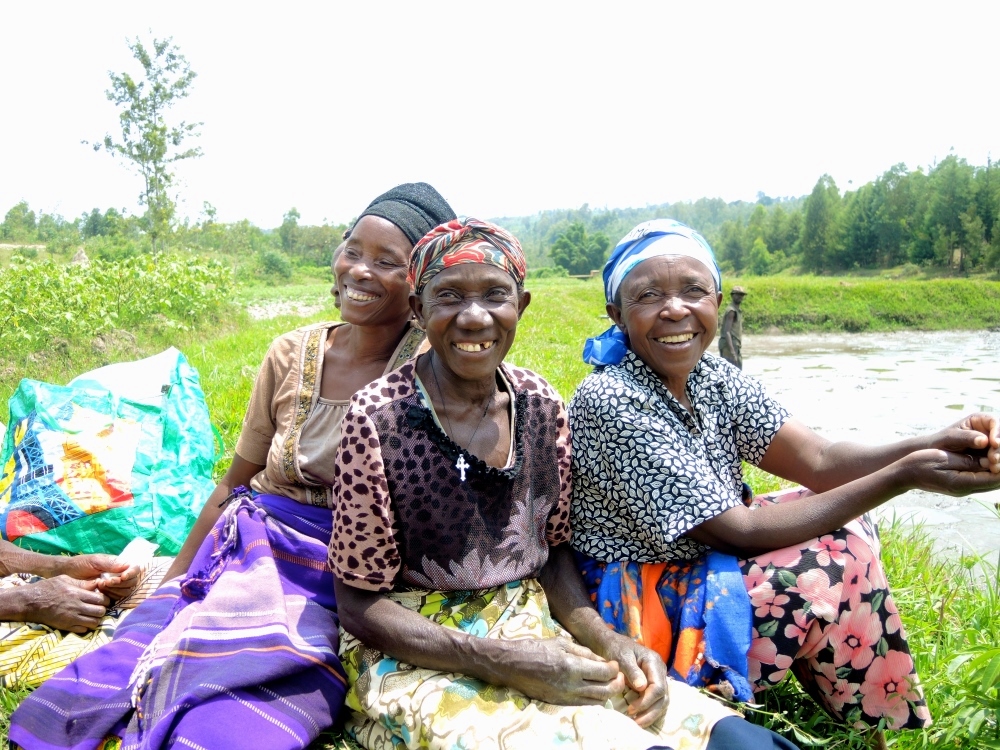 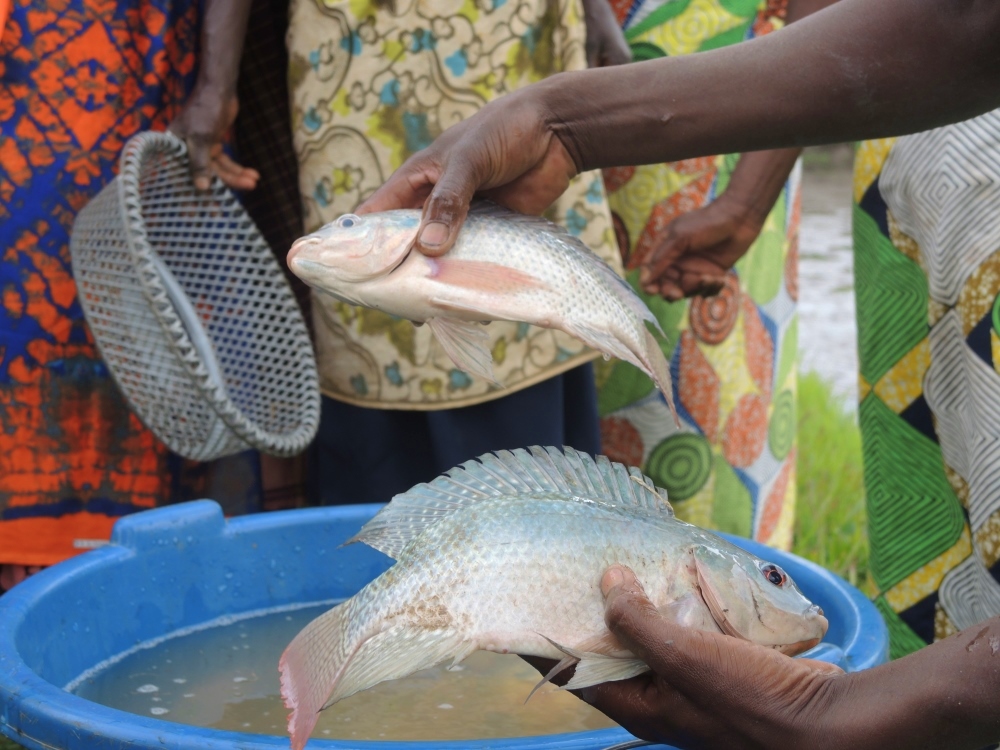 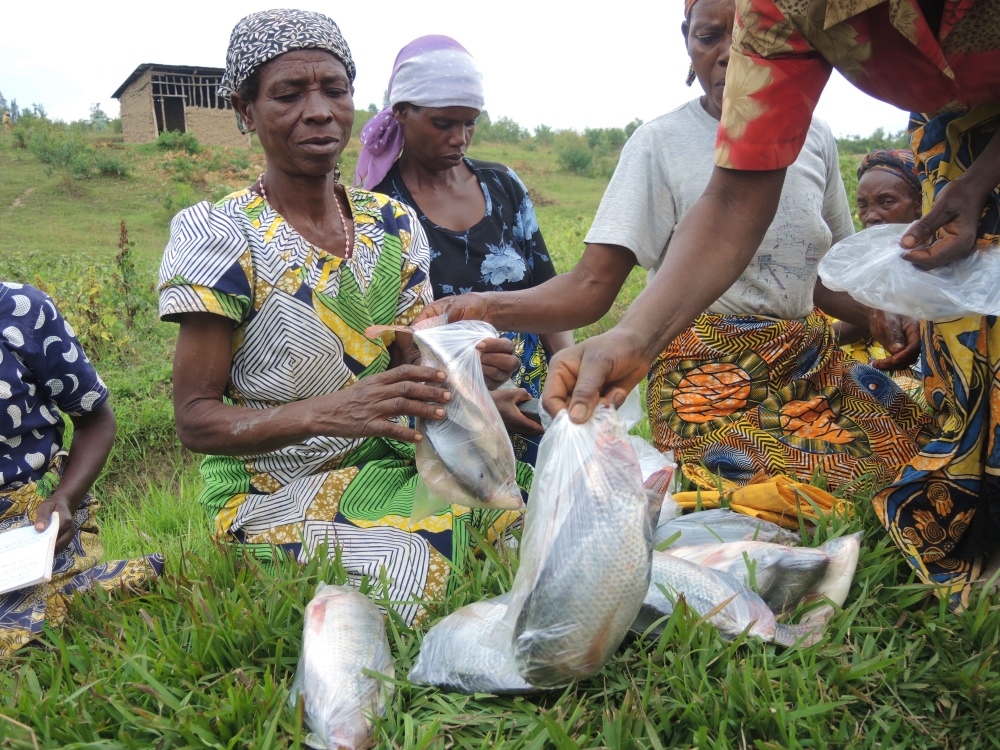 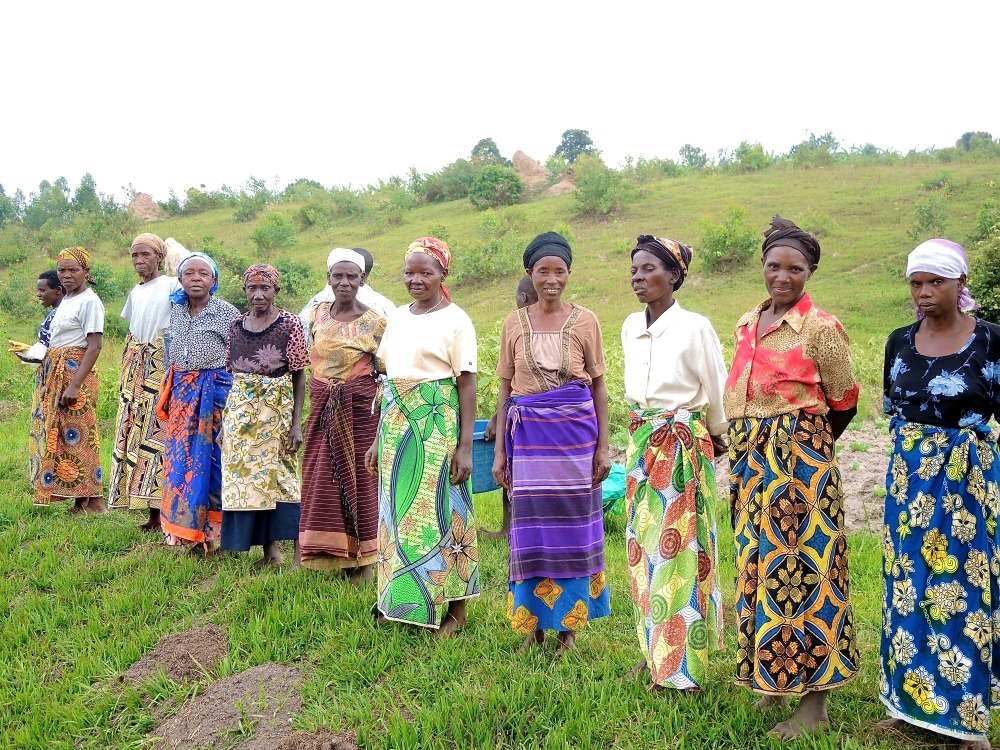 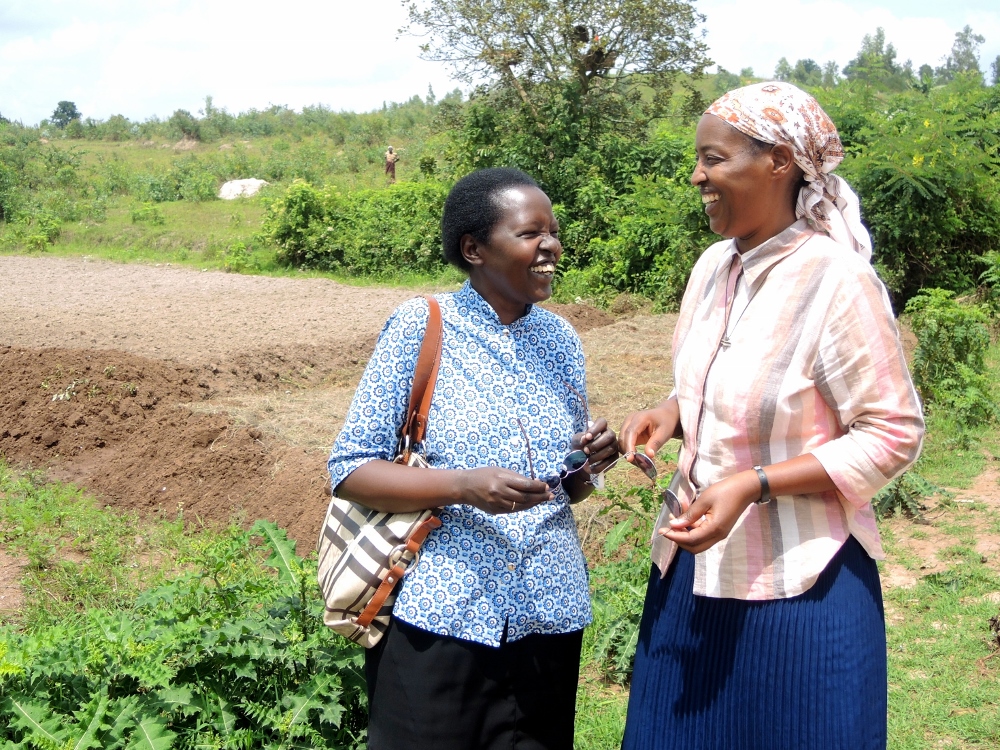 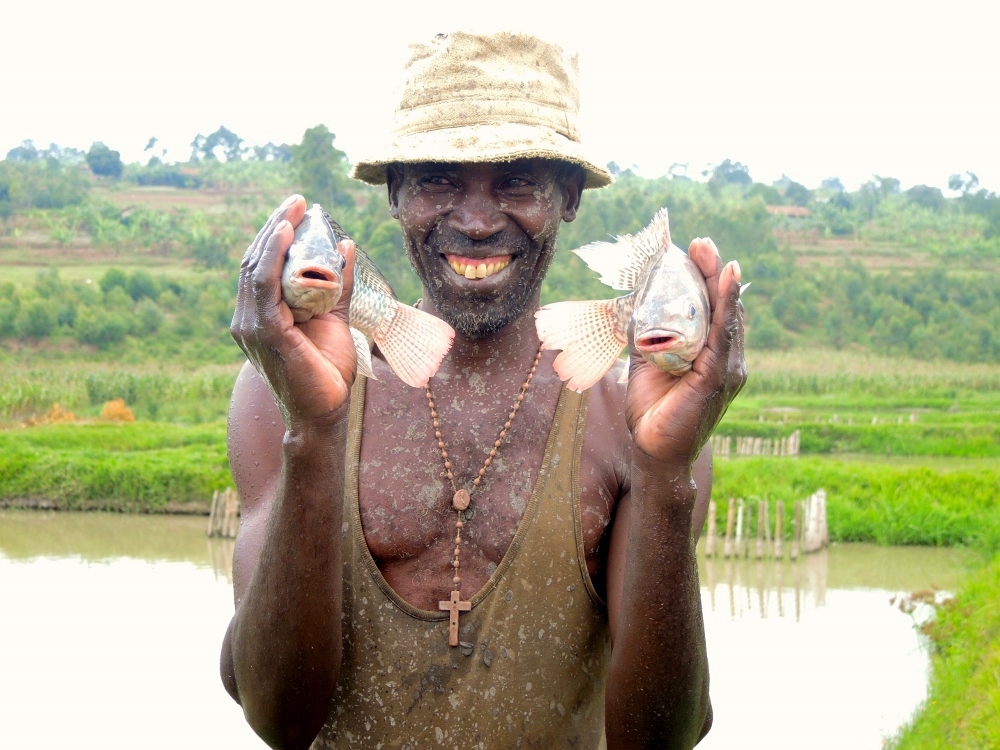 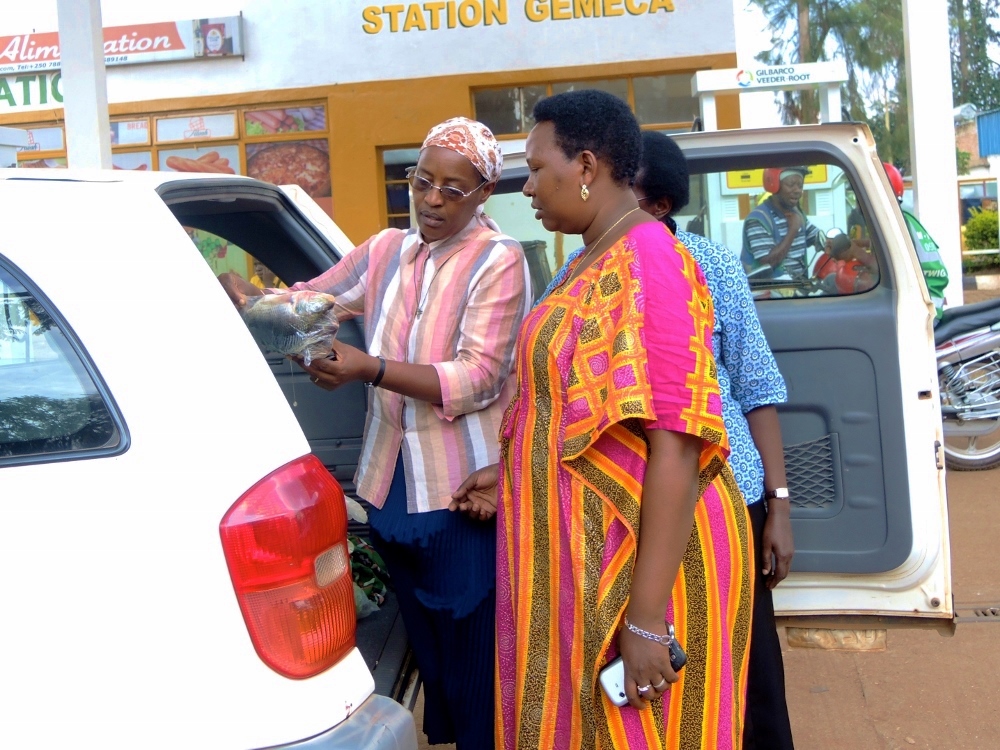